So, if you were here yesterday you witnessed a middle aged man practically brought to tears of joy by the magical thing that is a giant toy robot. I checked out Fort Max’s robot mode as well as his Titan Master and his Titan Master’s Titan Master. Today it’s time to check out the alt modes, and I’m going to start things off with his Battle Station Mode. Once again, I’m going to apologize for the quality of these pictures, but I had to get really creative with the lighting and backdrop in order to snap pictures of this beast.

So here’s the Battle Station. I love this mode and I don’t care that it’s basically just Fort Max lying on his back with his arms over his head. It’s cool, dammit! This thing is probably intended as a land vehicle, but I’d like to think of it as an ocean faring vessel, but it could really even work as a space ship if you want. It’s all up to your imagination. The legs form two forward pontoons with two massive dual-cannon gun emplacements, while the arms form landing strips for aircraft. Yeah, the upper legs and pelvis are just connective tissue. 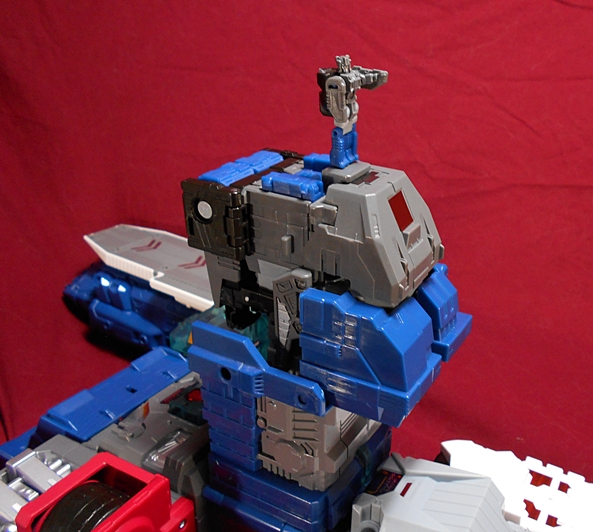 Cerebros forms a Command Tower in the middle of this behemoth, with Emissary free to stand on top and shout, “I’M KING OF THE WORLD!” Now, I realize this is Titans Return and Fort Max is designed to be manned by the tiny Titan Masters. Indeed, there are foot pegs all over this thing and these little bots certainly give Fort Max’s alt modes an incredible sense of scale. But I’m going a different route here because how often do I get to say, LET’S BUST OUT THE MINI-CONS!!!

Yeah, if you thought I could resist the opportunity to load up Fort Max with Mini-Cons the moment I transformed him, then you just don’t know me at all. Let’s take a quick tour! 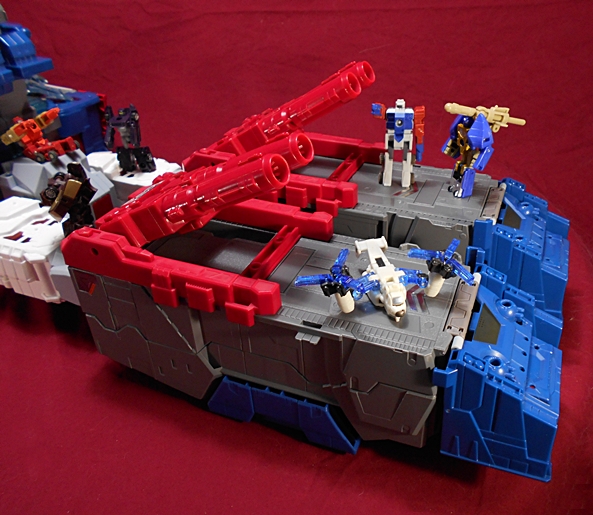 The front pontoons are probably not the best place for Mini-Cons to gather, as I imagine the blasts from those cannons are pretty fierce. But I’ve got a couple doing maintenance checks on the left pylon. I know what you’re saying. Stormcloud is a speedboat, what does he know about fixing cannons? Well, he’s taking some engineering extension courses from Powerlinx Blackout. Just go with me on that one. Meanwhile the other pontoon is being used as a makeshift helipad… Haha, see what I did there? Makeshift is using it as a helipad! OMGWTFLOL!!! Anyway, it’s worth mentioning here that the right foot on my figure does not lock into position like it should. I had to use a little blue-tack to hold it in place. That’s disappointing, but I guess not catastrophic. I wonder if this is a common issue or I just got lucky. Moving on to the middle…

There’s not much to do in this middle section. It’s just a place for the Mini-Cons to hold their adorable little Mini-Con meetings. I’ve got Blackout chilling and watching the skies with his AA-gun arms while Payload drones on about whatever Mini-Con’s drone on about. Probably how much it sucks to carry Sky Blast on his back all the time.

Over here, Waterlog is being lowered into the water by one of the cranes. Dammit, I can’t remember his name. Meanwhile, Sky Blast is standing by on his launch pad. 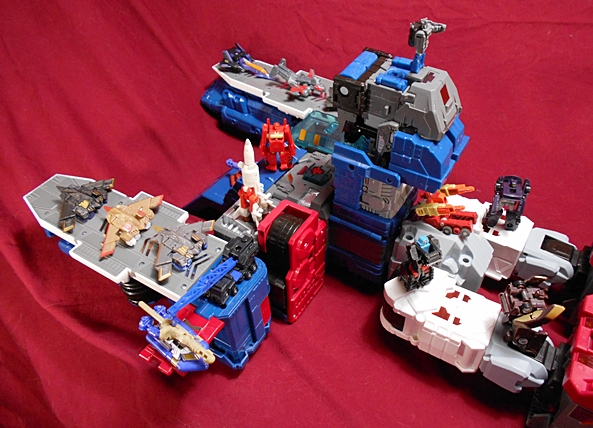 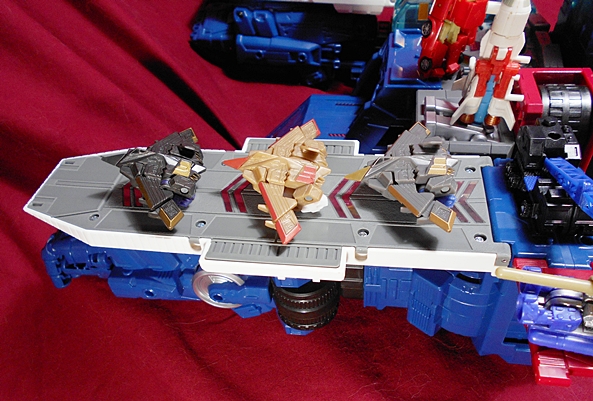 The runways are loaded with Mini-Con jets waiting to fly their sorties in case Starscream and company happen to show up.

And finally, I’ve got Waterlog’s twin… um, Other Waterlog, standing by to launch out of the bay in the back. 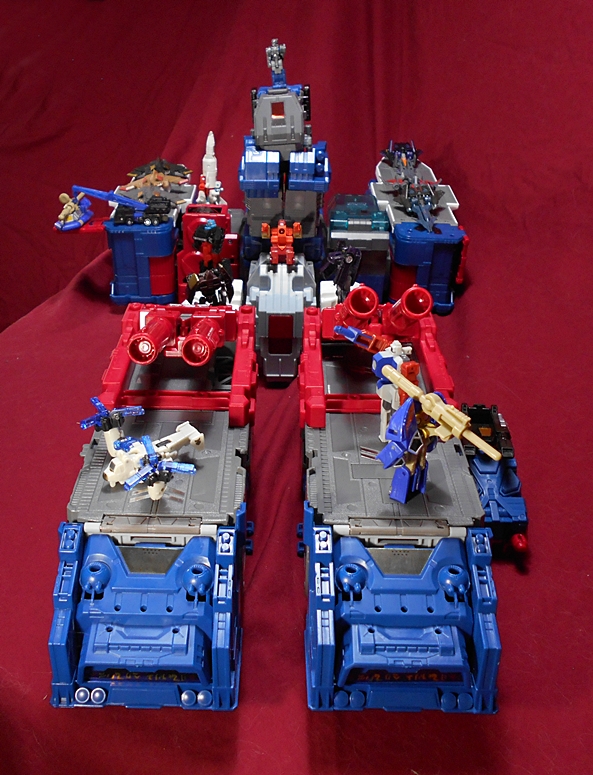 There’s a lot of fun to be had here with the Battle Station mode, and yes there’s an entirely other mode to play with. Insert G1 transforming sound here. 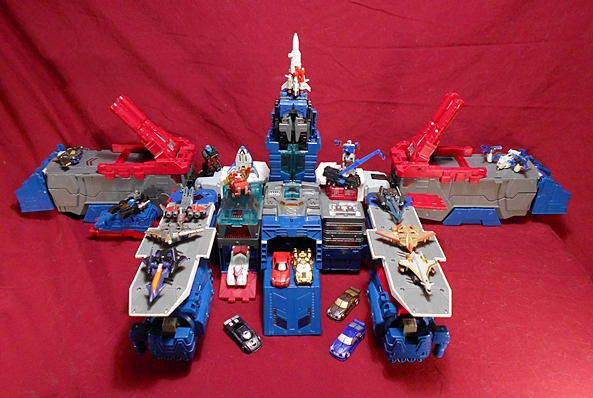 Now the City Mode is just as awesome and it looks great, but in fairness it offers more or less the same play areas as the Battle Station mode, just in a slightly different configuration, so there’s not a whole lot to be said about this mode that hasn’t already been said.

The central Command Tower is still there, although now the back of it is facing forward. It looks good, and I dig the way the little Autobot emblem can be seen near the top. This time, I’m using the top of the tower as a launchpad for Sky Blast. There’s some room here and there for other Mini-Cons to congregate, but there’s not a lot of areas here that are specifically designated to interact with figures. You can open up the translucent compartment to have access to a little room in there and maybe use it as a prison. 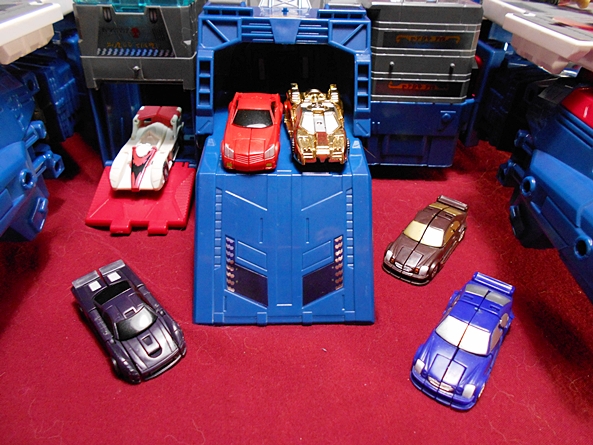 At the front ground level of the city we have a couple of garages, which work really well for the Mini-Con cars. This is probably the biggest difference between the two modes. The Battle Station didn’t have a lot of places for the cars to live, whereas here they do. I wish the main ramp wasn’t so steep, though. 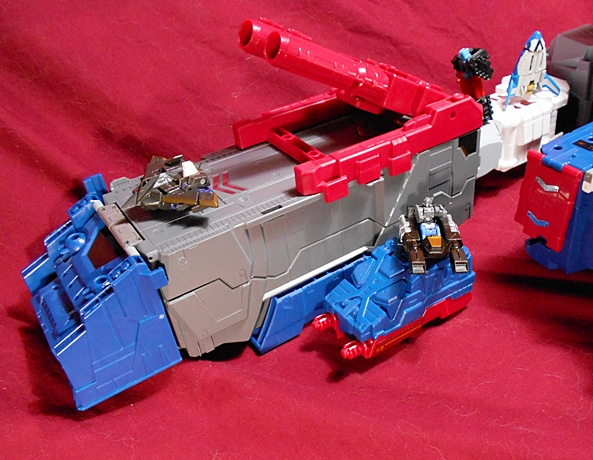 The box hanging off Fort Max’s leg serves as a gunner station with Cerebros’ gun attached to it. You can also detach this and use it as a tank, but it’s a bitch to get off.

The two front runways from the Battle Station are here, just separated from each other. They still serve as runways for my Mini-Con jets to launch from. You also get the two large gun emplacements on the sides with room for more launching areas or helipads or whatever you want. Like I said, we’ve seen most of this in the last mode, so there isn’t a lot new to talk about here. It’s still a great looking city, certainly a lot better looking than Metroplex’s city mode and, if I happened to choose this mode to talk about first, it would have been the Battle Station getting the shorter end of the stick when discussing the various features. As always, there are some different configurations you can play around with, but most of them are just going to be slight variations on what we’ve already seen. I should also note that while I get the most fun out of using Mini-Cons with the alt modes, Fort Max is still big enough to interact with the Deluxes and the tiny Titan Masters really give him an even grander sense of scale. 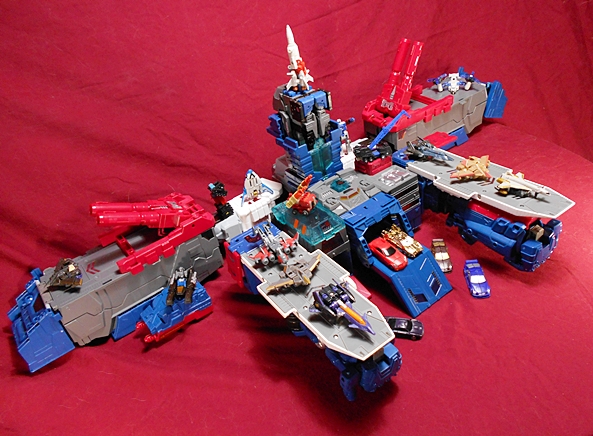 In case you didn’t notice, I’m impressed with Fortress Maximus and I’ve been having too much fun playing around with him. And finally getting him is all the sweeter for me since I never owned the original G1 toy. The closest I came was owning the Car Robots Brave Maximus, which I wound up selling off when the prices for him were going through the roof and I needed money to feed my video game addiction. I’ve felt bad about that decision for a long time, but now that I finally have a modern update of the old mold, I’m at peace with it. This guy looks amazing standing next to Metroplex and I can’t even imagine how cool they’re both going to look when displayed with the Titan Class Trypticon. Now I’ve got some major re-arranging to do as I try to make a new shelf for my Titans!