Here we go… it’s time to wrap up the Abomination Wave with a look at the last packaged figure, Eel, and then I’m going to stick around and put together The Abomination Build-A-Figure. I’m doubling up today, partly because I’m falling so far behind in opening my Legends figures, but also because I don’t have a whole lell of a lot to say about Marvel’s Eel.

Now I don’t want to piss all over The Eel. His alias (two characters have held the name) is not without some pedigree, with the original incarnation going all the way back to the 60’s in the pages of Strange Tales, where else? Throughout the decades, he’s served any number of teams from the Thunderbolts to the Serpent Society and he’s appeared in a number of relatively recent Marvel event books from Civil War to Original Sin. The blurb on the back makes it sound like he has an innate power to conduct electricity, but as far as I knew, he’s just a dude in a special suit. But hey, I’m no Eel expert.

Based on the costume, this is most likely Eddie Lavell, as opposed to Leopold Stryke who had a simpler deco on his mask. Obviously Eel is the budget-saving figure in the Wave. Although when you consider that Wonder Man and Cap got by with mostly painted bucks and Iron Skull was a repainted Mark 42 Armor, it feels like Hasbro did a lot of budgeting in this assortment. Nonetheless, for me Eel is the one figure that really smacks of being easy-peasy-cheap-and-breezy. The buck features zero original sculpting and it’s possible that we’ve even seen that masked head before. If not, then that’s the only original sculpting on this figure. Even the electro-effect hands came from Electro. 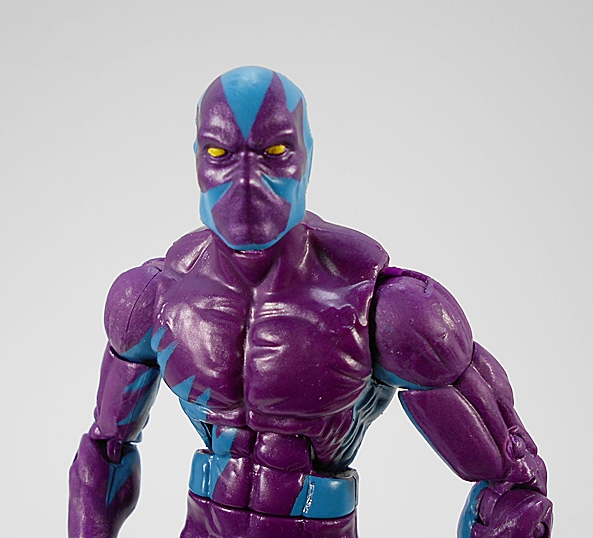 Still, I have to say I love what Hasbro does with these masked head sculpts. You can really see a lot of cool details in the facial features underneath. In this case, the chin and the nose are hinted at, and it looks like he’s snarling. The pupil-less yellow eyes are a nice touch. 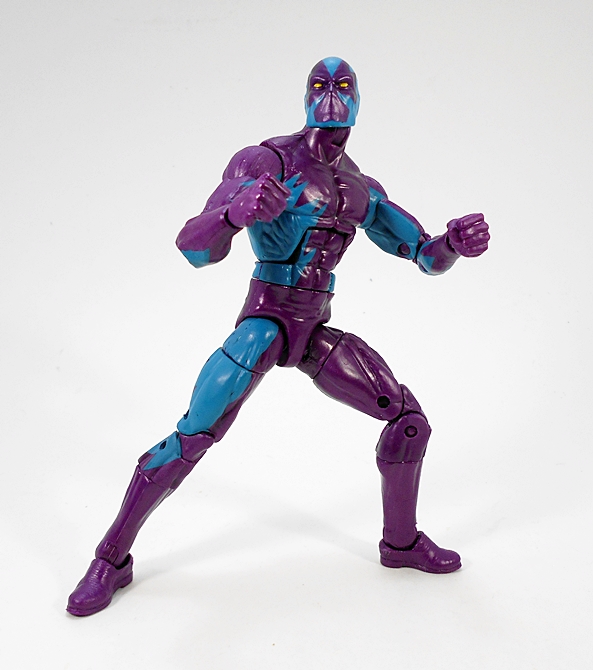 With that having been said, the coloring is somewhat attractive and the paint is clean. With the almost neon splashes of purple and blue, he looks like my Freshman Year Trapper Keeper from 1986. Articulation is standard for the line and he has a pair of regular fists if those effect-part hands aren’t to your taste. 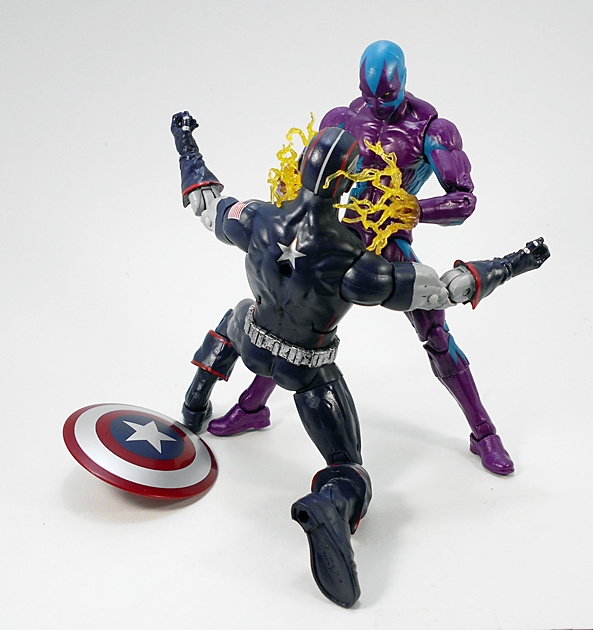 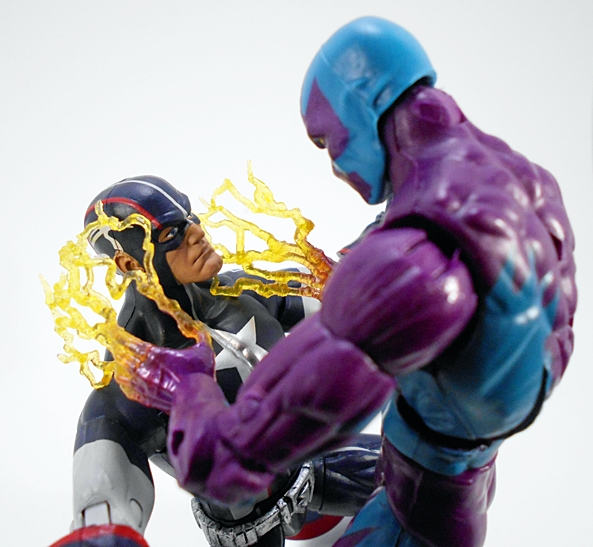 Personally, I really like the effect hands, and as you may know, I’m generally not really into effect parts, but these are fun and add a little something extra to a figure that really needed it. In the end, I’m going to have to surprise even myself and say I kind of like this figure. Eel is well done for what he is, and if this is the worst I have to buy to get a BAF part, I’m OK with that. And speaking of BAF parts, let’s move on to Abomination.

Yup, this is about as simple as a Buid-A-Figure can get. Six parts consisting of two arms, two legs, a body, and a head. Everything goes together super easy.

Like The Enchantress from the Dormammu Wave, Abomination was originally released as part of last year’s SDCC Exclusive Raft set. Wait, wasn’t Dormammu previously released as an SDCC Exclusive too? Wow, Hasbro is making a habit of this. And yet still no retail release of Magick. BOO!!! Anyway, the sculpting on the two figures is identical with this version only being set apart by a brand new paint job. The sculpt is genuinely superb. I feel like Hasbro could have cheaped out here and reused parts from the Ultimate Green Goblin BAF, but this looks all new to me and I really like it.

The detail in the craggy skin is phenomenal as are all the disgusting warts and bumps scattered about his body. The scales and ridges on his shoulders and back are also excellent. You get pretty standard Legends articulation here, with the only real cut being single hinges in the knees, as opposed to doubles. 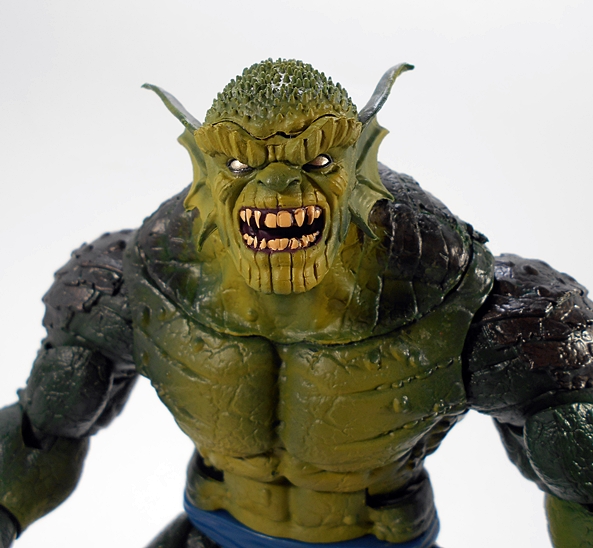 The head sculpt doesn’t disappoint either. I do have one tiny nitpick and that’s the seam that runs above his eyebrows is a little obvious. If this were a high end figure, I’d say that was a legitimate gripe, but here I think it’s entirely forgivable, especially when every other thing about the portrait is so damn good.

As for the paint job, I think it’s terrific. It’s far more dynamic than what we saw on the Exclusive version. You get gradations of green starting mostly dark on the extremities and back and lightening up on the chest and face. I’m kind of torn on it. On the one hand, I think it looks a lot more interesting, and ironically more like a premium figure, than the SDCC version. On the other hand, I think I’d have to say the Exclusive is more accurate to most of the comic art I’ve seen. I definitely prefer this one, with my only issue being the paint on his shorts looks really flat compared to the rest of the figure. 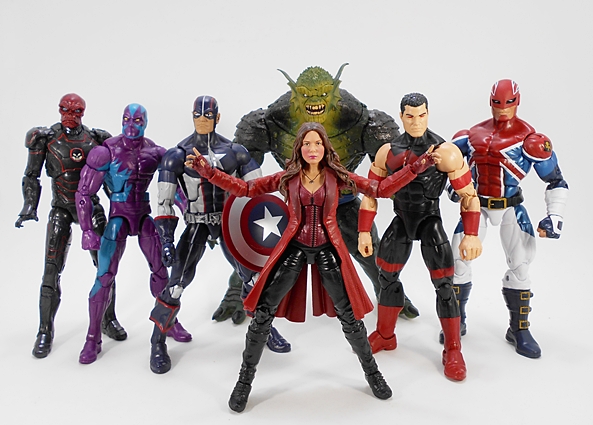 And there we have it, another Wave of Marvel Legends in the bag. While this assortment tends to get crapped on, I actually enjoyed it quite a bit. The Abomination, Wonder Man, and Captain Britain are all characters that I’m very happy to have on my shelf. The MCU version of Scarlet Witch was long overdue, and the rest are just solid universe builders. Of course, I seem to be in the minority on that opinion, because with the exception of Scarlet Witch, Amazon was blowing these figures out for as little as eight bucks a pop at one time. But hey, more for me. On the next Marvel Monday, I’ll be taking a break to look at some Marvel goodness from a line that I haven’t shown in a long while, and then I’m going way back to check out some Spidey villains before moving on to the Space Venom Wave. Oh boy, am I behind!!!