After doubling down on Transformers Thursday last week, I’m taking a week off from the change-o-bots. Also, because I have nothing new to look at. Maybe something new next week? Maybe not. It all depends whether the Retail Gods are good to me. In the meantime… Mythic Legions!!!!

A few days ago, the second Mythic Legions Kickstarter came to a close with an unprecedented $930,000+ pledged against a goal of $140,000. Needless to say it was a success, and needless to say I’ve had a lot of money hoovered out of my bank account to support it. And now commences the long wait until the projected shipping date of April 2018. Hoo boy, that wait is going to hurt! Luckily, I still have some unopened Mythic Legions figures to tide me over a bit. Today I’m opening another release from the Covenant of Shadows assortment. His name is Scaphoid, and don’t stop him now, he’s a necromantic skeleton waiting to reload, like an atom bomb about to oh oh oh oh oh explode! Seriously, read the bio on this guy! It’s metal.

At his core, Scaphoid borrows a fair amount from the excellent (and personal favorite of mine) Skapular The Cryptbreaker. Most notably the tabard-wearing torso, the bony arms, the segmented bicep armor, and the the high collar, which I presume is to protect against decapitation at the hands of Sir Gideon and his band of do-gooder knights. The hip armor is different. Sure, we’ve seen it before, but I really like the buckles on this style, and his angular gauntlets and boots come from the Orcs. It’s a wonderful combination with a lovely ancient patina on the armor and a deep purple paint on the tabard that transitions to an eerie green down towards his feet, giving him a bit of a spectral glow. And speaking of spectral glows, it’s the unbelievably spooky and ethereal green paint on the bones that makes this figure truly (and almost literally) shine. It’s the magical necromancy energy that’s baked right in! I really can’t say enough great things about the paintwork on this figure. As always, even the individual rivets on the armor are painted!

As is almost always the case with these figures, Scaphoid comes with a set of optional shoulder armor, which pegs into those holes on his back. I originally wasn’t going to use these pieces, because I rather dig the armor on his upper arms, but once I put these on I knew I had to keep them. It has the same great coppery finish as the rest of the armor and the emerald inlays really look spectacular along with the green deco of his bones.

Scaphoid includes two portraits and they’re both so good, it’s damn hard to choose. The stock skull is in pretty good condition and beautifully sculpted. Why would you ever want to change this out for another one? Because the other one includes a hinged jaw and a lot more cracks and a couple of missing teeth. Do you like your skulls to be clean and fresh or roughed up and beaten around? The choice is yours! This would be an opportune time to have doubles of a figure, because if you change up the shoulders and heads, they’d each still look pretty unique even standing next to each other. 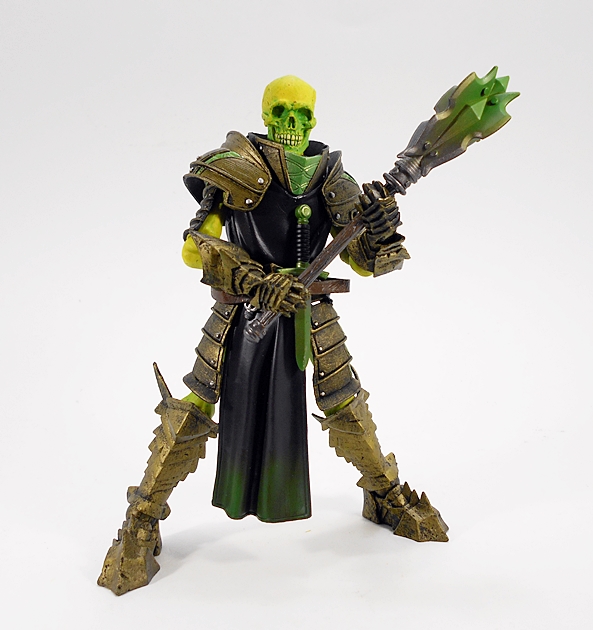 Scaphoid comes with a collection of gear that we’ve seen before. The mace is still the freshest piece in this arsenal. I only own one of these and it came with Sir Godfrey. This one is painted with a greenish hue around the mace head. It still features some really nice sculpted wood grain in the handle and the head looks like it could do some serious damage. 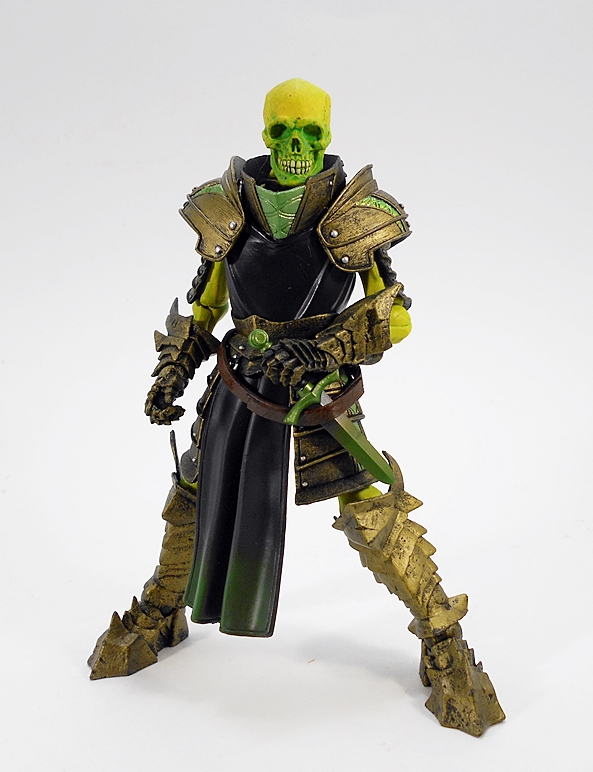 The dagger is familiar too, it seems like a majority of the skeletons have come with daggers. It sports the same greenish tint to both the blade and the hilt and looks absolutely bitchin. He also comes with the standard brown belt so he can wear the dagger on his hip or slung across his belly. It also doubles as a shoulder strap if you want to give Scaphoid another sword and sling it across his back. 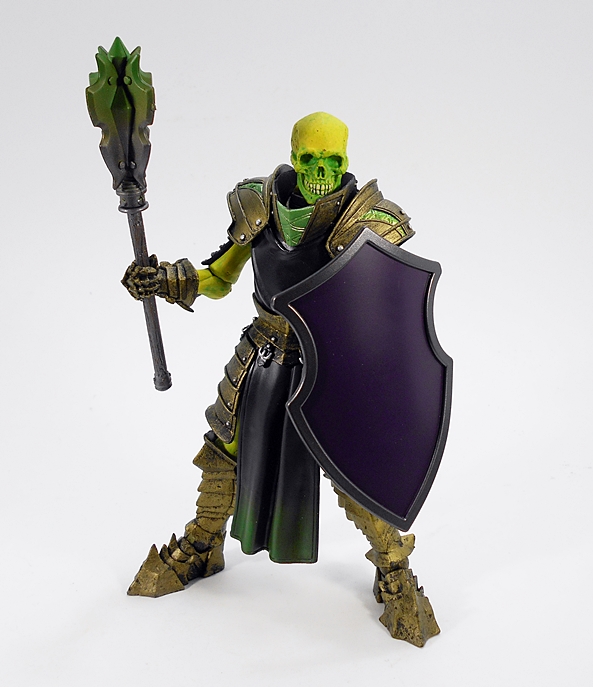 And finally we get a standard shield, which we’ve seen many times, here with the surface painted purple to match his tabard. I really dig this piece, but I think it’s the one accessory that I’m starting to get a little tired of seeing. I also would have liked some kind of coat of arms on his. Maybe at some point, T4H could release sticker sheets to allow us to customize some of the blank shields. That would be cool! 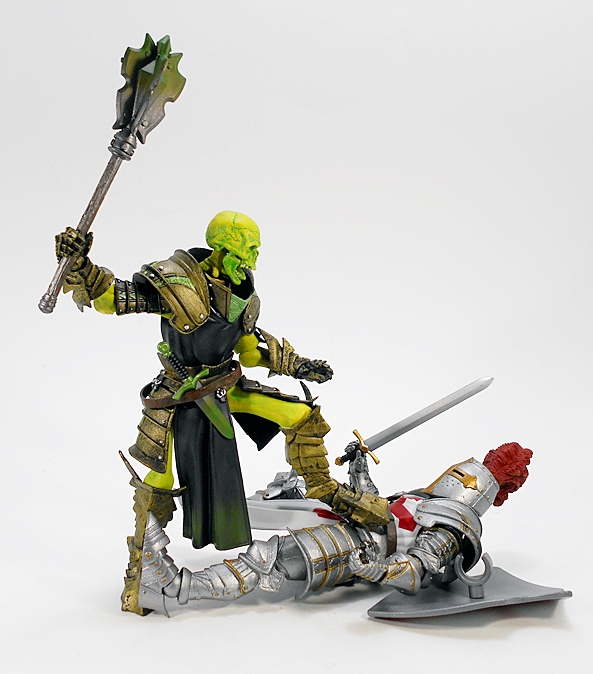 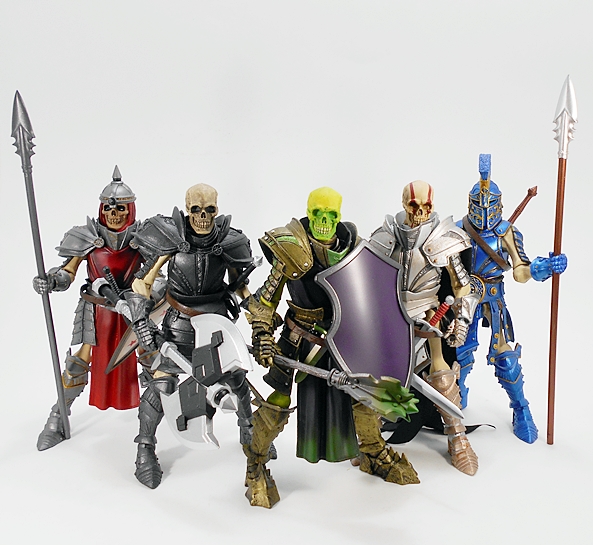 The Skeletons in this line have all become non-negotiable for me. I’ve got them all so far and I’ll keep buying any and all they release. God help me if they ever start selling these skellies regularly on StoreHorsemen, because I’d probably be ordering more every month. With that having been said, Scaphoid here still feels like something special and a lot of that just comes from the distinctive magical deco and the crazy story behind him. I’m done trying to assign favorites to this line, because they’re all so damn good that whichever one is in my hand at the moment is usually my favorite, but right now I’d rank Scaphoid right up there among the best. He’s just gorgeous and he compliments my skeleton ranks beautifully.