Rogue One hits Blu-Ray today, and I’ve already been down to Wally-Mart to mingle with some scary people and pick up my copy. Even after seeing this flick four times in the theater, I was still anxious to get it on home release and see it again. It seemed only appropriate that I also spend today opening up Chirrut Imwe and Baze Malbus from the Star Wars Black 6-inch series. Let’s check them out!

This was a weird pair of releases in that Hasbro just seemed to tuck them into a mostly recycled wave. Now, like Marvel Legends, I tend to buy my Black Series figures by the case, because there’s always one or two that are hard to find. I really didn’t want to do that here, because it meant getting doubles of figures I didn’t want. Luckily there were a few online retailers that offered them up as a pair for just a couple of bucks over the usual retail and I was able to get them with no fuss and no muss. I’m still more than a little miffed that we didn’t get a Bodhi Rook or Saw Gerrera in the 6-inch line to finish out the Rogue One team, but I am really happy we got this pair. For a movie that a lot of people complain has no heart, Rogue One managed to pack a lot of soul into these two characters.  Let’s start with Chirrut… 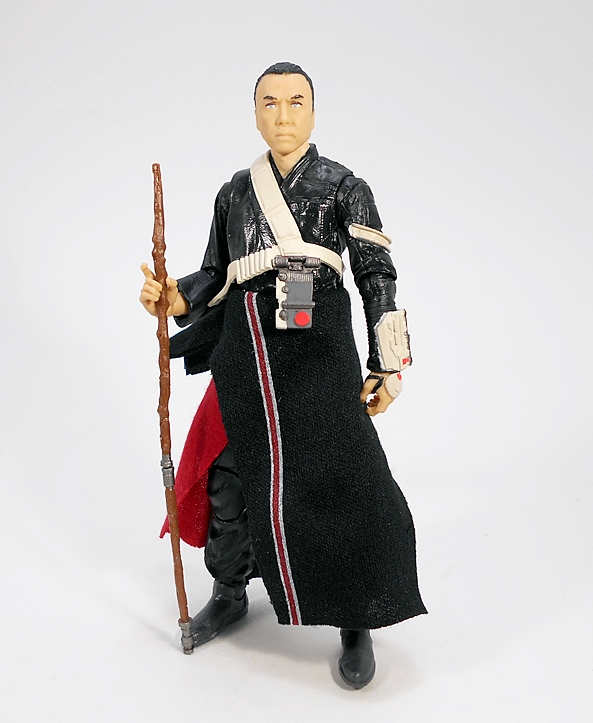 I really like Chirrut’s costume and I’m really thankful that they didn’t just give him some boring brown Jedi-inspired robes. What we got is a great look for a “space monk” and it fits in perfectly with the Star Wars Universe. Hasbro took the opportunity to give us some soft goods robes, but as usual mixed it up with sculpted plastic as well. I think the effect here is overall pretty good, but I get a big disconnect between the plastic on top and the robe on the bottom. It looks more like he’s wearing a skirt, whereas the actual costume extended up to his shoulder. On the other hand, the cloth doesn’t impede the range of motion in the legs, which is a welcome treat. The articulation here is pretty standards stuff for the line and he’s loads of fun to pose and play with.

The robes that hang off his back are molded as part of the cross strap, and I don’t think they really look like part of the overall garment, but I know what they were going for here, so I can at least see it for what it’s supposed to be. I do like the two cloth straps that hang off of him. These can be positioned to give him some sense of momentum when posing him in action scenes. It may sound like I’m nitpicking the costume here a lot, but let’s face it, this wasn’t a terribly easy costume to do in this scale. Hasbro made some compromises and in the end I think it looks good and doesn’t interfere with the fun of playing with the figure, so I’ll call it a win. But is there really anything here that they couldn’t have done in a Vintage Collection style 3 3/4-inch figure? Nah.

The head sculpt is passable, but it’s exceptionally soft. I think it’s a decent likeness, which I can easily recognize in the context of the costume, but probably wouldn’t as just a head. As is often the case with this line. a competent paint job would probably go a long way. There’s a big disconnect between the sculpted eyebrows and what’s painted there. This feels more like passable 3 3/4-inch scale work than it does 6-inch scale work, but if that’s not something I was willing to accept at this point, I wouldn’t still be buying this line. 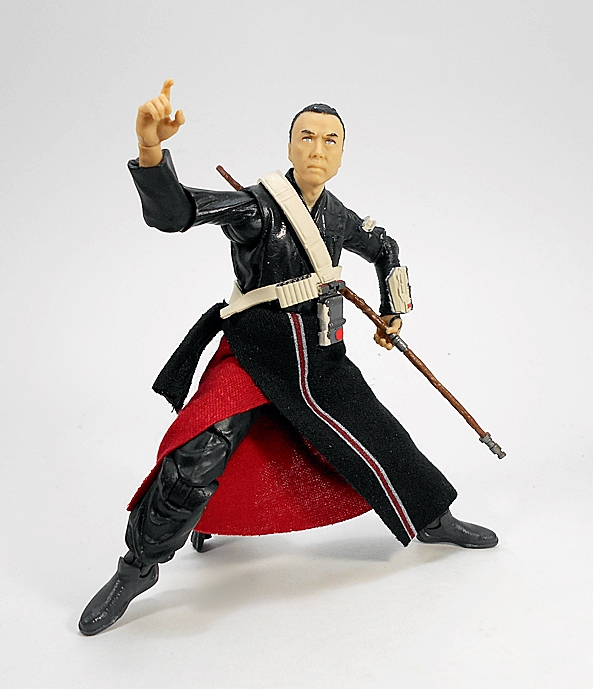 Chirrut comes with two accessories: His staff and a rifle. I was initially tempted to say that the staff feels too small for him, but after looking at some pictures of him in the film, as well as the upcoming Hot Toys release, I think it’s pretty close.  There’s also a fairly good amount of sculpting and paint work for what is essentially just a big stick. The wood is textured and there’s a grip and a reinforced tip. 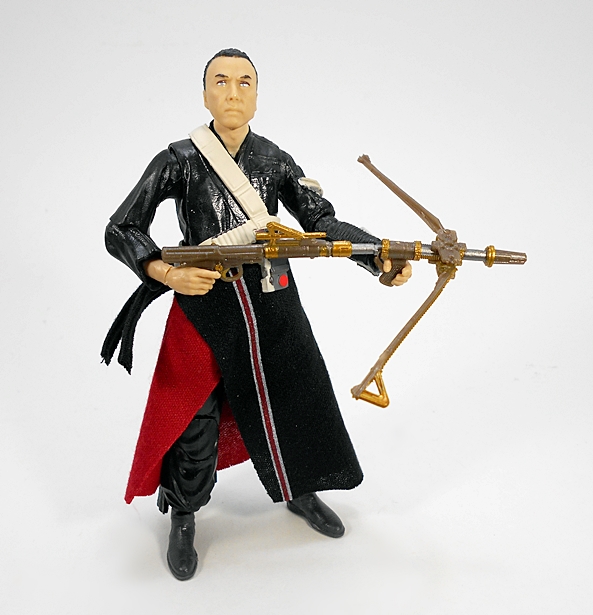 The rifle is a strange piece indeed. When deployed it reminds me a bit of Chewie’s bowcaster. It feels a little cheap and flimsy, but in fairness it’s a very thin weapon and it has several points of articulation, from the rotation in the center to the two hinged arms. Toss in some paint apps, and I’d say Hasbro did the best they could with this weapon in this scale. I do wish it had a shoulder strap on it so Chirrut could wear it across his back. I’ll probably just tie a piece of string to it. Moving on to Baze…

Baze, the heavy gunner of the team is an all around nice piece of work. His overalls are sculpted with plenty of rumples, stitching, and pockets. It’s a little soft, but overall pretty good. The armor pieces feature some nice weathering and appear to be additional pieces laid onto the buck, which make them a lot more convincing. The belt and pouches are also separate pieces attached to the buck and there’s some great detail in the chest piece. Articulation is just as good as Chirrut as far as the actual points go, but Baze’s chunky buck makes his range of motion a little more limited, particularly in the upper legs.

From the back, Baze has a rather large slot for his backpack. It’s unsightly, yes, but I’d rather have it there with the option of being able to take off the pack, than have the pack permanently attached. I suppose they could have gone with actual working straps, but that seems to be asking a lot from this line. Still, the 5-POA, 3 3/4-inch Rey figure from The Force Awakens had a backpack with actual straps and all. Just saying… 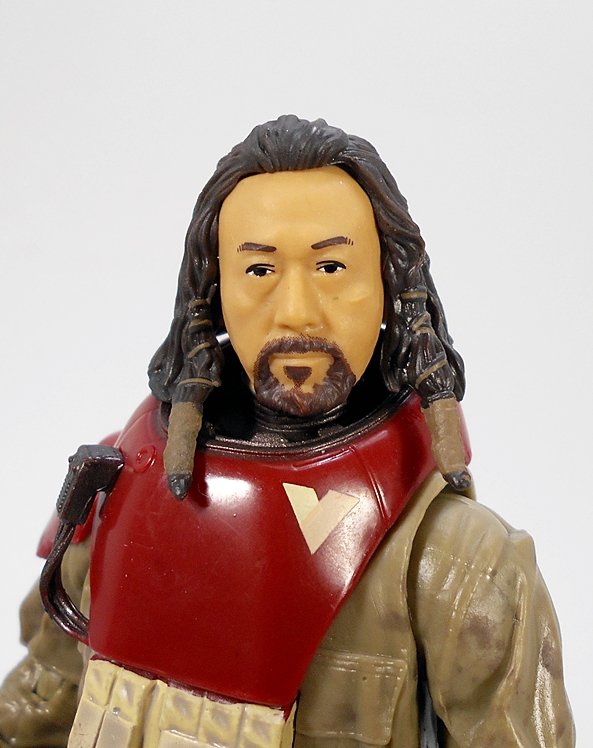 The head sculpt here is actually pretty damn good and with some better paint it probably could have been phenomenal. Either way, I would have no troubles recognizing this likeness with or without the context of the body. 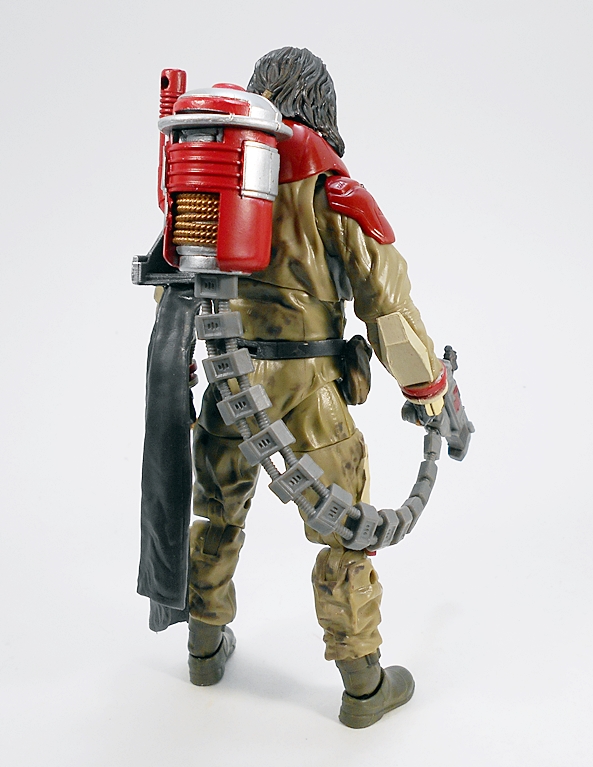 The backpack, which is the laser gun equivalent of an ammo drum tabs right in and features some great paint and sculpted details as well as a sculpted sash that hangs off the back. I haven’t looked into the tech behind this thing, but I’d like to think that it’s just a giant generator needed to power his repeater blaster. The cable tabs into the bottom of the drum and the other end goes into the blaster where an ammo magazine would be if it were a conventional rifle. 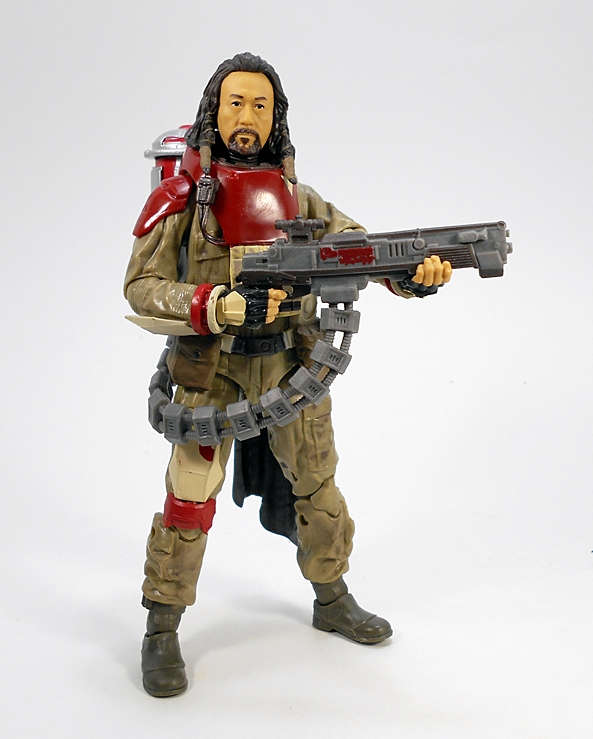 The cable has a good amount of flex in it, but it does sometimes impede the poses I’d like him to do. Add to that the fact that the drum on his back makes him pretty back-heavy and very prone to toppling backwards. I don’t want to beat up on Baze that badly, because he’s a great looking figure and still pretty fun, but he’s at his best when he’s just standing there beside his buddy Chirrut with his rifle at the ready. 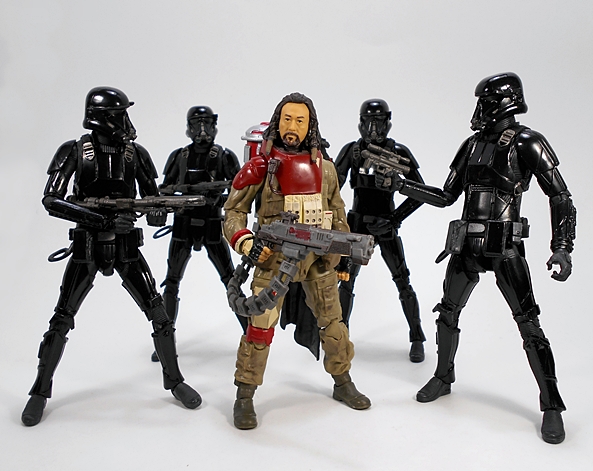 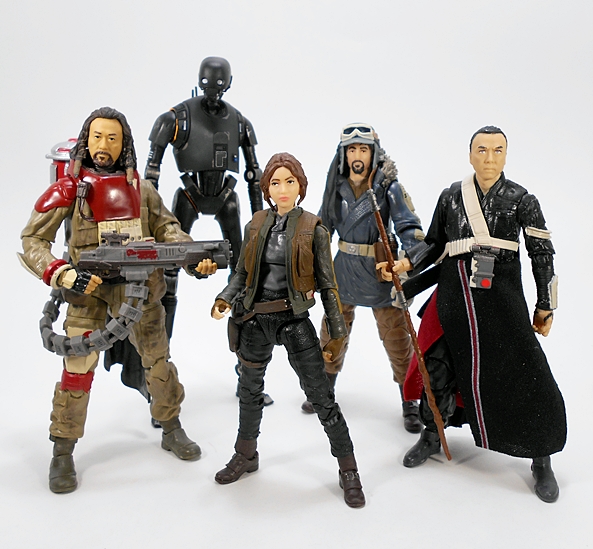 While I have some nitpicks here and there, I think Chirrut and Baze turned out to be pretty good figures, especially when considered within my tempered expectations of the 6-inch Black Series. They each have their strong points and when taken as a pair they compliment each other beautifully. They also make for a fantastic display with the other members of the Rogue One team. Yes, I’m still upset over the Bohdi-shaped hole in my display. I thought Rook was a great character, and came the closest to having something resembling a fully fleshed out arc. It was great to see him going from reluctant spy to full-blown self-sacrificing hero.