In case you hadn’t noticed, my last two Transformers Thursdays have been leading up to today, as I’ve been saving my most anticipated figure in this assortment for last: Gnaw the Sharkticon! First introduced in Transformers: The Movie, this ravenous horde of cybernetic beasties served as a form of execution for all who were condemned to death by The Quintessons. That sounds pretty bad ass, until you realize that the Sharkticons are a bunch of dumpy, goofy-looking dummies. Nonetheless, they were certainly something new and different and for whatever reason I thought they were cool. Unfortunately, they also came out at that weird time for me where I was still watching The Transformers cartoon, I definitely saw the movie, but I wasn’t really getting that many of the toys anymore. I kind of still wanted them, but my Christmas and Birthday gift requests were leaning more toward video games than toys. Which means that this Legends Class release is actually the first time I ever owned a Sharkticon. Am I excited? You betcha!

I’ve got something to say about Hasbro’s choice of size here, but first, can we just talk for a moment about that card art, because… HOLY SHIT LOOK AT THAT CARD ART! The bat-shit crazy, cracked-out green eyes, the massive teeth, the sharp claws. That particular flavor of nightmare fuel is not what I think about when I think about these guys. Kudos to whoever drew that, because it makes me see the Sharkticons in a whole new light. Now, about the size. When I first saw pictures of the toy, I was excited. Then I heard it was a Legends Class and I was really disappointed. Now I have the figure in hand and I’m realizing that it was a perfectly acceptable decision to go the Legends route. I’ll still argue that he’s a tad too small, but not so much so that I can’t accept him being in scale with the Deluxe figures. I’d also argue that the smaller size makes him more ideal for army building, but then I’ve had a hell of a time just getting my hands on one. Normally, I start my change-o-bot reviews with the alt modes, but let’s go with the robot mode this time… 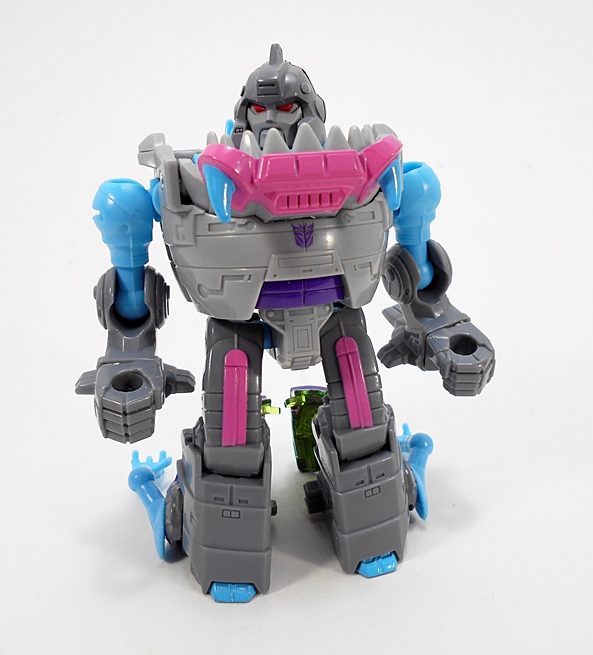 I’ll just come right out and say it… I absolutely love this robot mode, but do I have a few complaints? Sure. The arms hanging off the backs of the feet is a textbook example of unsightly kibble. I kind of get the idea that the designer just threw up his hands and said, “Screw it… I got nowhere to go with them!” One might argue that they serve a function as heel spurs, but Gnaw already has those. I’ll also add that I wish the row of teeth in front of his head didn’t come up quite so high because it obscures his face quite a bit. But, with those gripes aside, I think this guy looks fantastic. The design manages to capture the familiar look of the G1 movie aesthetic and even smooth out the proportions a bit so he doesn’t look quite so ungainly. There are some lovely sculpted panel lines and detailing, and while a good deal of the coloring here is in the plastic as opposed to paint apps, the coloring is spot on perfect, right down to the bizarre choices of pink and blue used in the original toy, only more sparingly here. If I can get a couple extra Gnaws, I may try to color his teeth with a silver marker, but otherwise, I love the deco.

OK, so from the back, things aren’t as great. The top half of the alt mode is peeping back at you and looks like he’s going to wave. You also get some hollow areas and unfinished screws. Obviously, the Legends Class is held back a bit by budget and size, so let’s just say that it’s best not to look at Gnaw from the back. 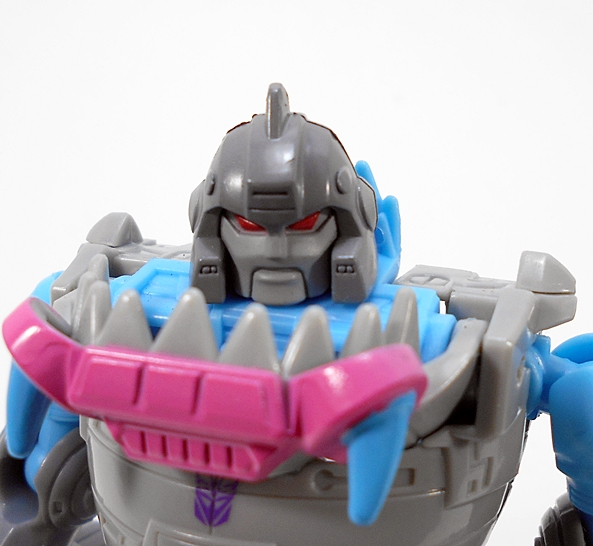 Moving on to better things, the head sculpt is a wonderful update to the original toy. It’s not nearly as goofy looking. I always loved the shape of the Sharkticons’ “helmet” and they did a great job painting the eyes.

Like the original toy, Gnaw has a little spiked flail that he can wield in either hand and serves as his tail in his alt mode. And with that skillfully interjected segue, let’s turn to his alt mode. The transformation here has some cool and unexpected things going on and the result speaks for itself.

Yup, the “shark” mode represents pretty damn well, offering only a few things for me to nitpick. I don’t really care for the way his robot hands are exposed behind his feet and I wish that seam running down his face closed up a little better. Or perhaps I should say, I wish it stayed closed up a little better. Otherwise, I really love what we got here. The deco here shows off some more purple, and I can’t say enough great things about the plastic they used for his eyes. So much about this figure just feels so much more “premium” than your average Legends Class release, and that’s coming from someone who tends to really enjoy this Class quite a bit. The plastic looks and feels great, the colors pop, and even with some notable drawbacks in the design, the end result succeeds brilliantly. 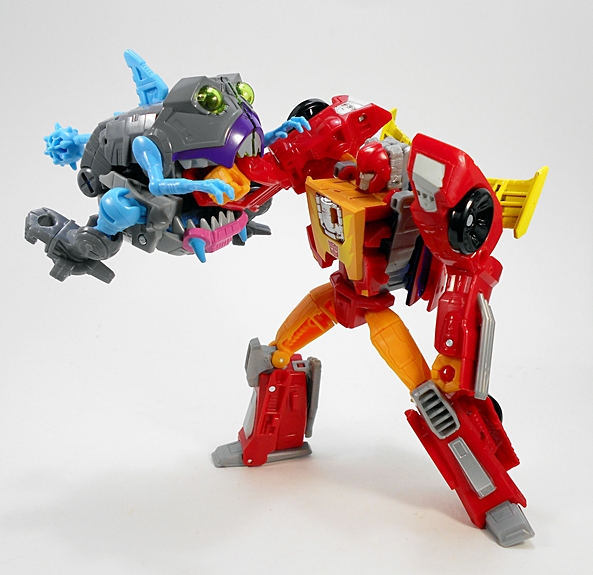 I honestly didn’t know what I was going to think about Gnaw once I got him opened up. I wanted him to be great, but part of me was still wishing they had designed him as a Deluxe Class figure. Now, I’m not going to lie, part of me still wishes they had gone that route, but mostly because I’m curious as to what they would have done given a little more complexity of design. Truth be told, I’m totally satisfied with what we got in this little package and I’m going to do my best to try to track down as many of these little buggers as I can without paying scalper prices. The Sharkticon is an update that was long overdue, and Titans Return seems to be the perfect venue to revisit a lot of those overdue updates.