I make it no secret that Marvel and I are at odds these days when it comes to most of their comics, but thankfully, there are some that I have remained unshaken on, and those are The Amazing Spider-Man and some of the related off-shoots. I’ll confess, I never wanted the awesome pages of Superior Spider-Man to come to an end, but I was happy to find that Peter Parker getting his body back wasn’t the end of the ride for me. It wasn’t a clean break and there was plenty of great stuff carried over and even some cool new characters. One of those was Cindy Moon, aka Silk!

Silk shares her slot with Ashley Barton, Spider-Woman, as the “Web-Slinging Heroines” and she was a great choice of character for this wave. Spider-Gwen may be the most popular breakout Femme Web-Fatale of the Spider-Verse, and while I enjoy Gwen’s book well enough, I actually think Silk’s is a lot better and the character deserves a much bigger piece of that spotlight. Her book started very strong, tugged at some of those loose strings from Superior Spider-Man, and hasn’t disappointed me yet. I still think it would have been cool to get a figure of her in her original webbing “costume,” but this one works for me too.

Silk not only shares the packaging with Ashley, but also uses most of the same buck with paint applications used to reproduce her costume. The only key difference that I can see below the neck is the chest piece, the sculpt of which left less to the imagination than this one does. Oh yeah, and Silk has one fist and one splayed hand, rather than the double dukes we saw on Barton. The paint on my figure strikes me as a pretty average effort, with some unfortunate slop between her chest and her neck, but the rest of the lines are pretty sharp. The gray and black deco doesn’t really pop all that much and I’m not a big fan of the lack of transition from the red webbing to the black, which looks more gradual and better executed in the comic. Still, it’s a presentable paint job and some of the fault here may be in what I feel is a costume design that tends to look better in the art than on a figure.

Hasbro graced us with two different heads, one masked and one unmasked, although these look to be more variants that completely different sculpts, and that’s fine. Both of these are great sculpts, but it probably goes without saying that I’ll be getting the most use out of her masked head. That is unless the slop on her chest bothers me enough to buy a second figure and then I can have the best of both worlds. That’s cool, because one of the things these two noggins have in common is a set of beautiful eyes. 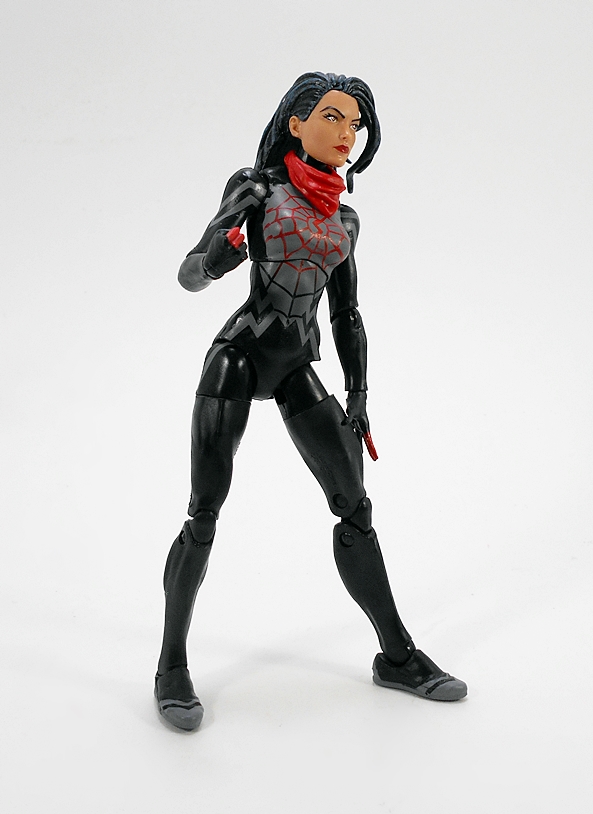 I think the unmasked portrait is particularly stunning. As for likeness, well, here’s where there’s a bit of a disconnect. Obviously they went for a look that would fit in with the Legends line more than the stylized art of Lee, Ford, or Fish. But beyond that, I think she looks too old. Also, while I love the dimension and complexity that they gave her hair, I would have liked Cindy’s shorter look better. This may sound like a lot of gripes, but rest assured, I really do like these head sculpts. Although, I can’t deny that a Goblin-Serum alternate head would have been pretty damn rad. 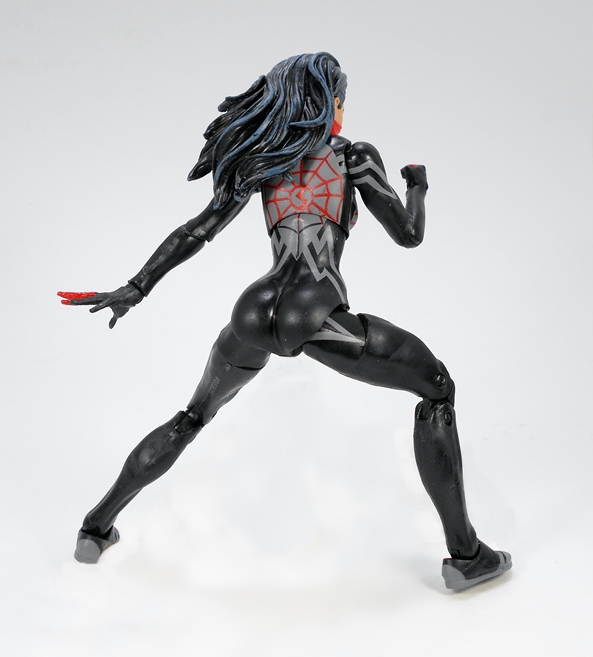 Because Silk shares most of Ashley Barton’s body, the articulation is the same. She has rotating hinges in the shoulders, elbows, and wrists. There are swivels in the thighs, but none in the legs. The knees are ball jointed, and the ankles have both hinges and lateral rockers. There’s no swivel in the waist, and just a ball joint under the chest. The neck has the usual ball joint and hinge combo. Like i said with Ashley, the articulation here is serviceable, but feels a little lacking for a Spider-Verse character. I just expect my Spider-babes to be a little more limber. Nonetheless, there’s fun to be had with her. 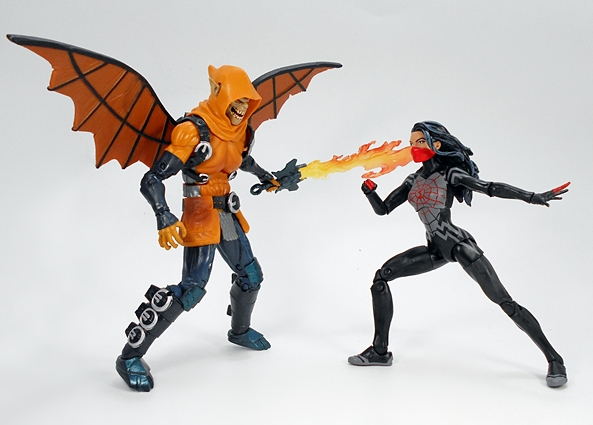 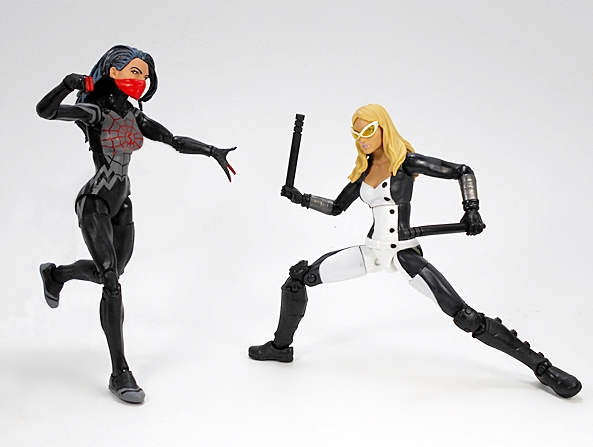 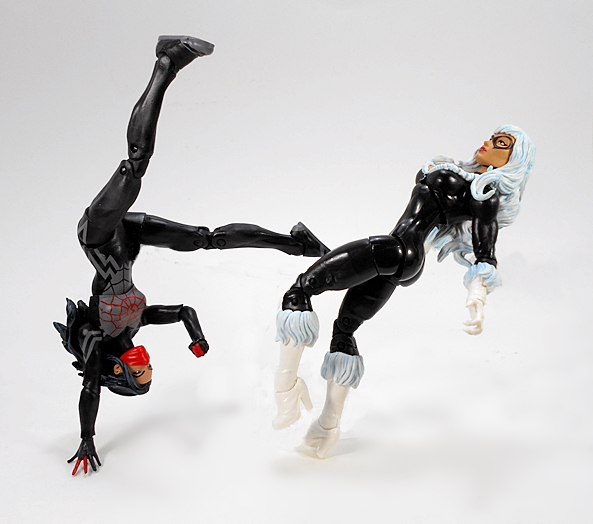 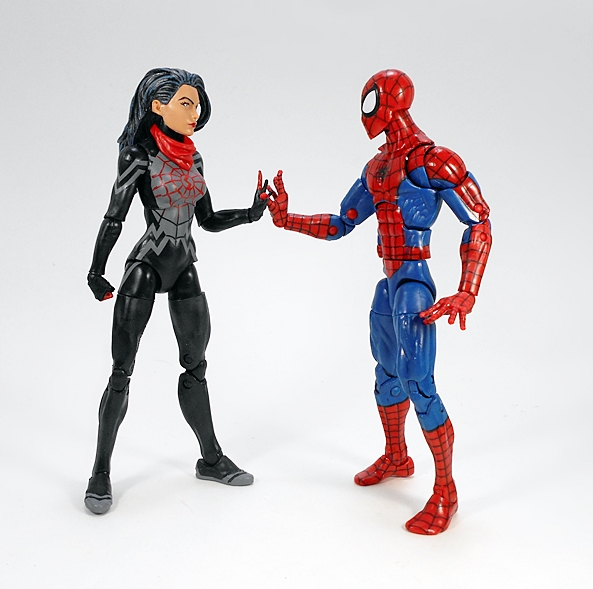 As a fan of the comic, Silk was pretty high on my list of anticipated figures for this wave, and overall I’m pretty happy with what we got. Whichever head sculpt I go with, they both do a lot to elevate the figure and make it really shine. Indeed, for what is essentially “Yet Another Spider-Man Wave” Silk is just another addition to what has been an impressive assortment of figures.  Next Monday, I’m going to wrap up this wave with a look at the Ultimate Peter Parker figure and the Space Venom Build-A-Figure!