I don’t often get the time to squeeze a Figma review into Anime Saturday. These take me a lot longer than my usual Saturday morning prize figure fodder. But I was off this week, and it seemed a great opportunity to open up a new Figma I got a few weeks back. Besides, these things are really piling up, and I haven’t done a Figma review since last October when I checked out the ALO Version of Asuna. So, let’s check out another of the ALO Avatars from Sword Art Online II… Leafa! 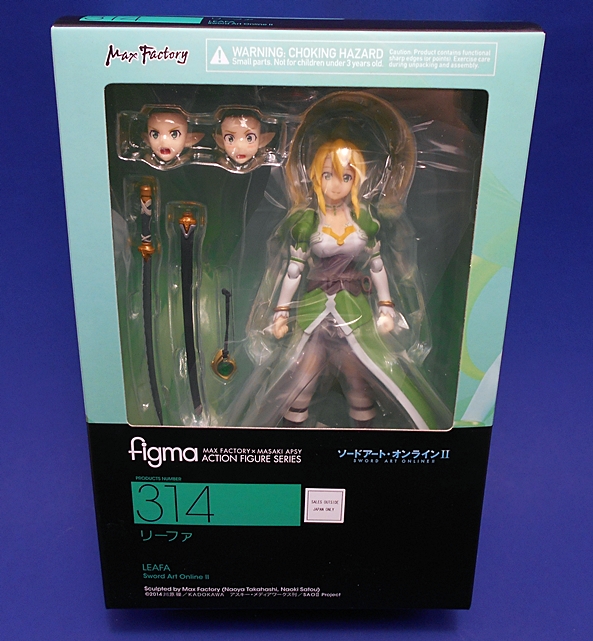 There’s really not much new to say about the packaging. It’s a window box, it’s collector friendly, and it’s great for keeping all those bits and bobs together. I also love the character art on the side panels, because right now, I don’t have room to display my Figmas, so they’re boxed and lined up on bookshelves. They look great that way and I have easy access to them. I’m usually content to hunt for deals on Figmas, but I actually pre-ordered Leafa to make sure I didn’t miss out like I did on the first releases of Sinon and Ryuko Matoi from Kill la Kill. Thankfully, those are getting second releases, but I think Leafa is less likely to. 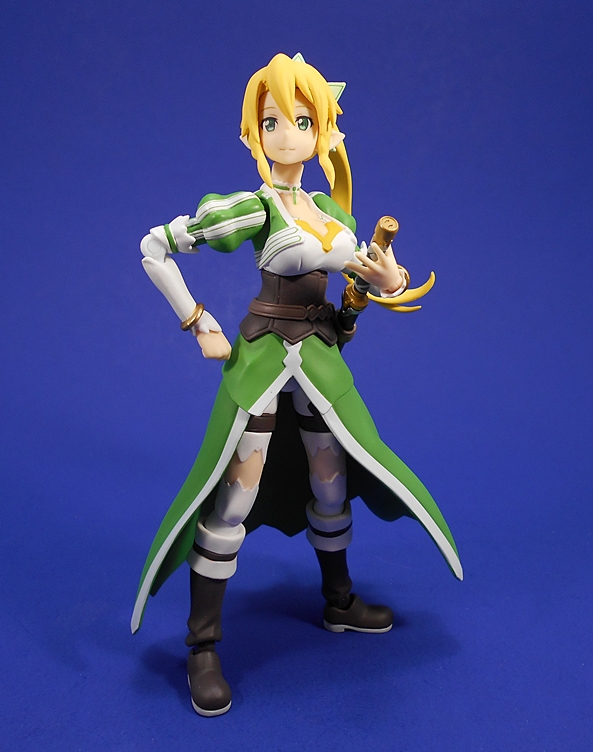 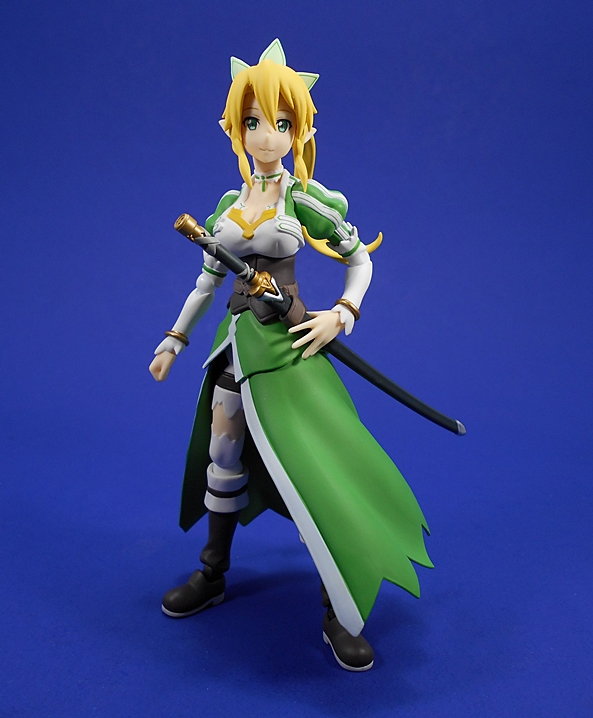 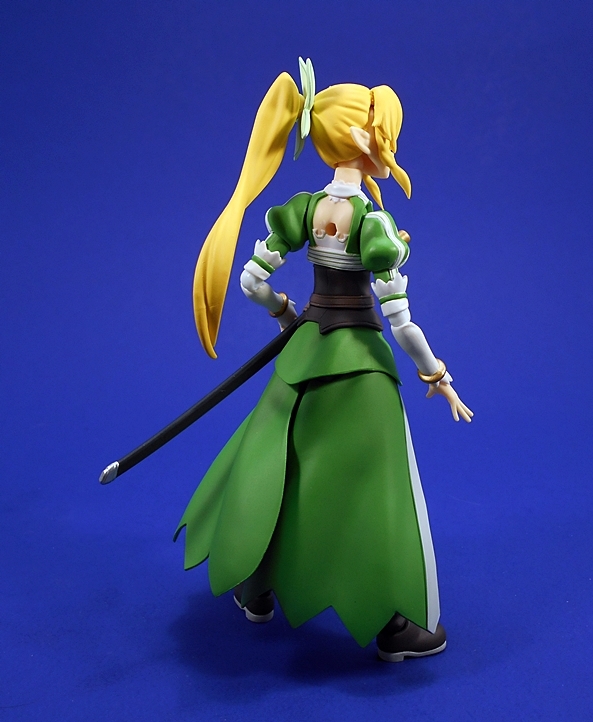 I’m a big fan of the costume designs in ALO, particularly Leafa’s. The sweeping jacket-skirt, the ballooning shoulders, the ragged cut sleeves and stockings, all make for some great swashbuckling fantasy garb. As usual, there’s a ton of sharp detail in the outfit. You get sculpted stitch lines in her corset, the gold bangles on her wrists, and the finery of her bodice. The coloring on this figure is pure perfection, from the dominant green and white, down to the yellow and brown accents. The pale shade of green and fine lining done on her hair tie is particularly sylph-tastic, which is a word I just invented and promise to never use again. There’s something about the look of these figures, whether its the quality of the plastic, or the rich coloring, or a combination of both, but there’s nothing else quite like a Figma. 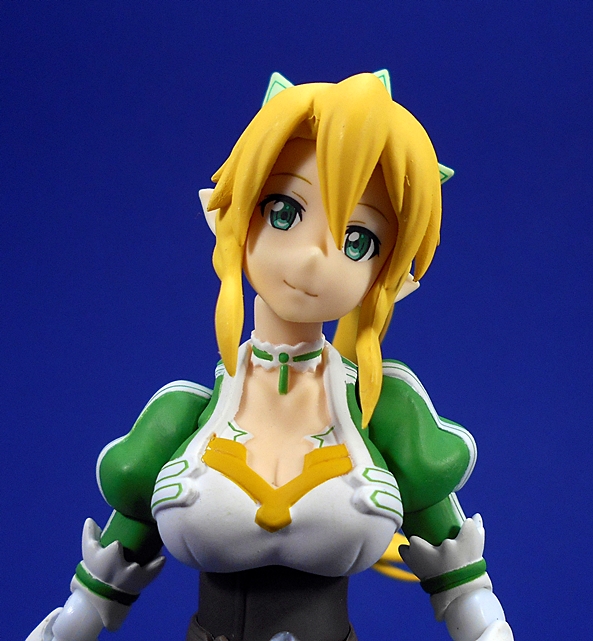 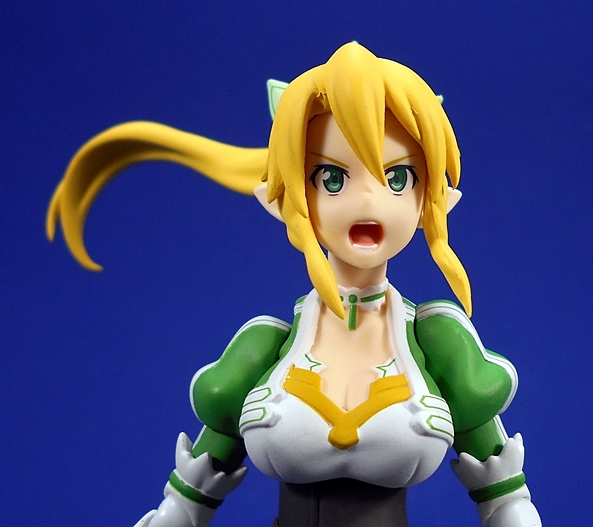 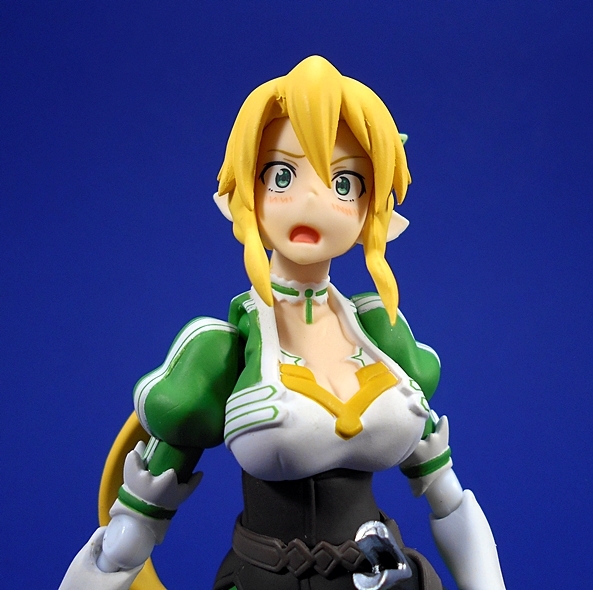 Leafa’s portrait includes three different expressive faces. You get the standard smiling one, the angry, shouty face, and an adorable surprised and/or embarrassed face. All three of these are perfect, especially thanks to the gorgeous printing on her eyes.  I’ll also note here, that her ponytail is on a ball joint and the yellow they used for her hair is extremely rich and vibrant. 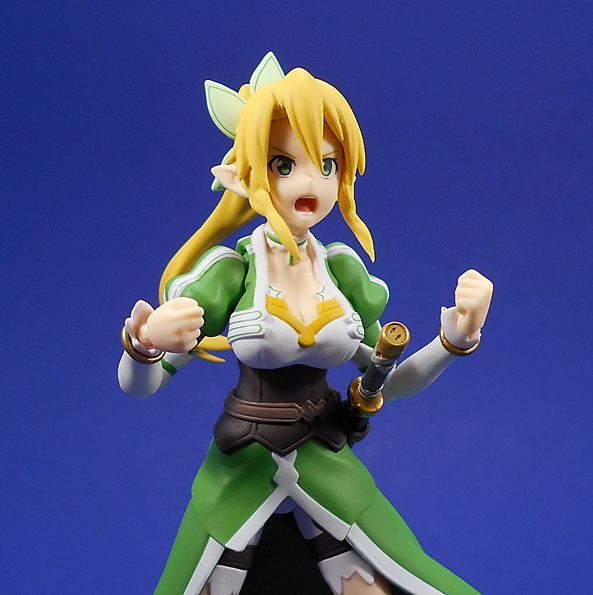 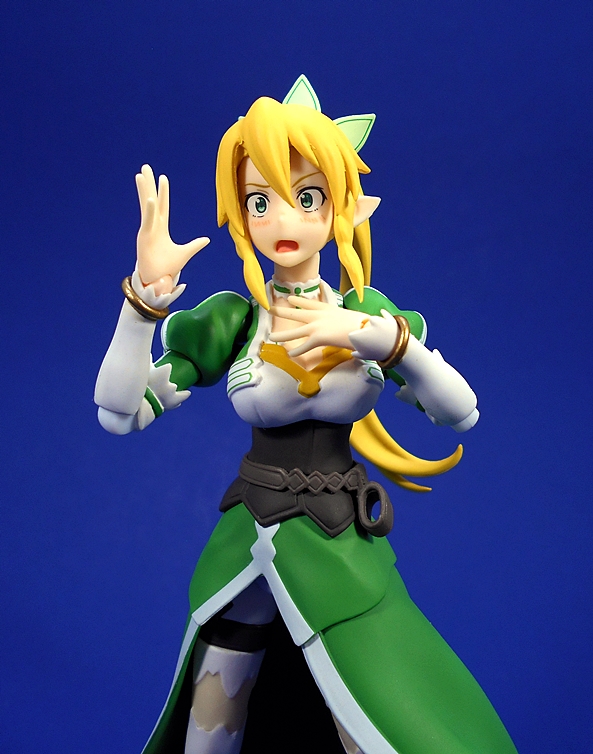 Obviously, Leafa comes with the familiar sprue of hands, mostly of the usual varieties: Relaxed hands, splayed hands, sword-holding hands, and fists. You also get a really cool piece, which is her hand interlocked with Kirito’s. It’s one that I can’t get much use out of now, but I hope to remedy that soon by picking up the ALO version of Kirito while I still can. 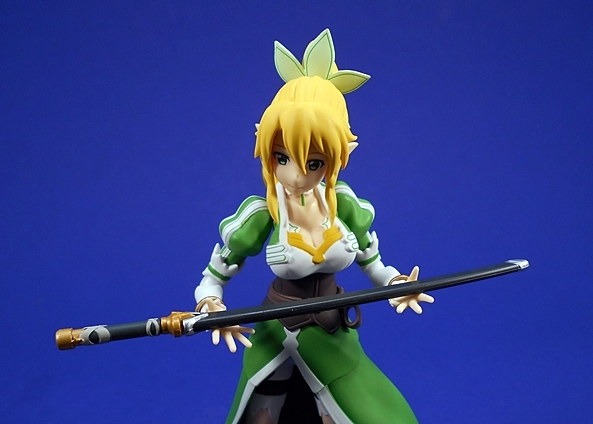 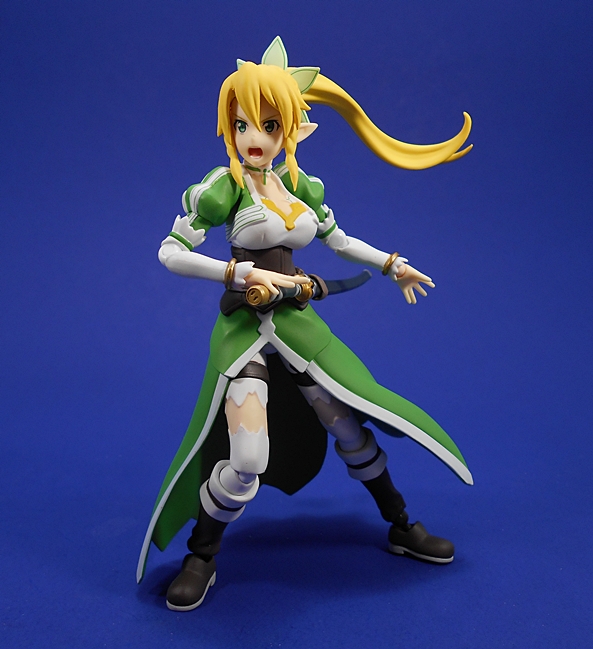 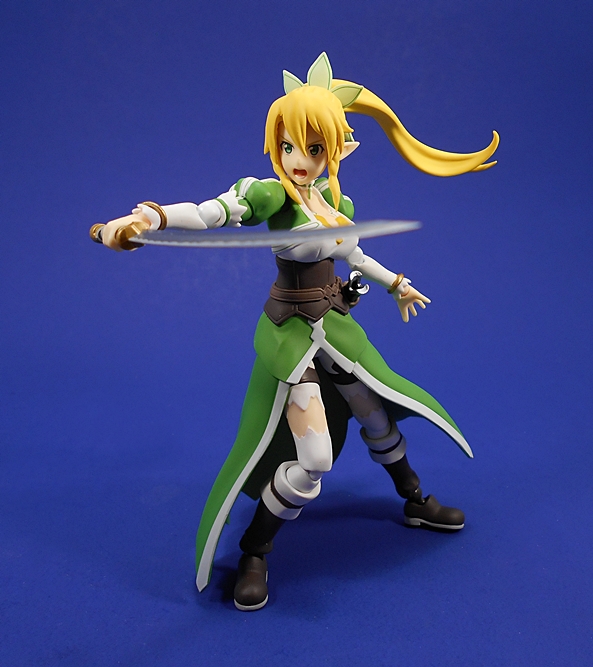 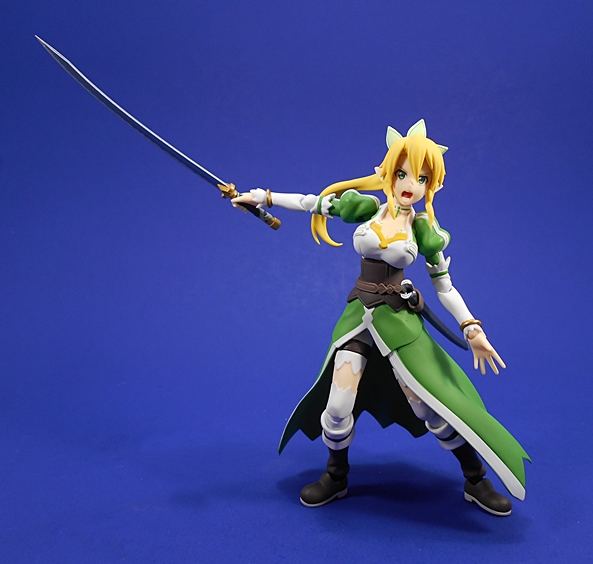 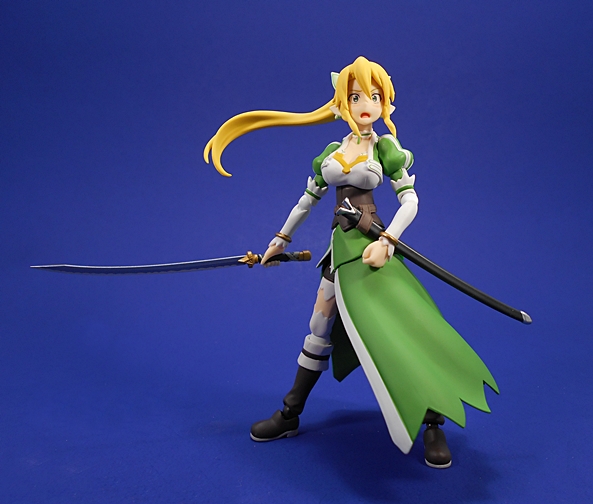 Next up, she has her sword, and I guess I’m a bad fan, because for the life of me I can’t remember if it had a name. Hopefully it didn’t and that’s why I can’t remember it. Because it would be folly to try to make a sword this small fit the scabbard, the SAO Figmas have tried different means of trickery. Traditionally, you get an unsheathed sword and a scabbard with a hilt you can plug into it, to make it look like it’s in the scabbard. Leafa mixes that up a bit, by giving you a scabbard, a blade with crossguard, a crossguard, and only one hilt. Now, follow me on this one. To “sheath the sword,” you pull the hilt off, peg it into the tiny crossguard, then peg that into the scabbard. The problem here is that the pegs are so goddamn tiny and thin, that it isn’t a question of whether they will snap, but more likely when. Is this just a way to save money by not including two hilts? On a $65 figure??? Whatever the case, be careful with the sword, folks! 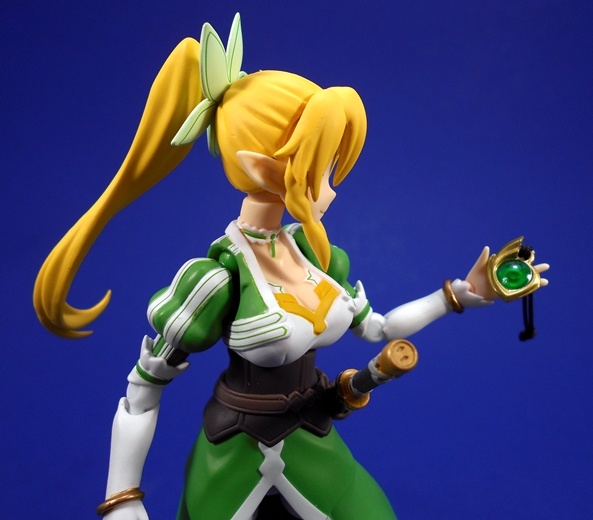 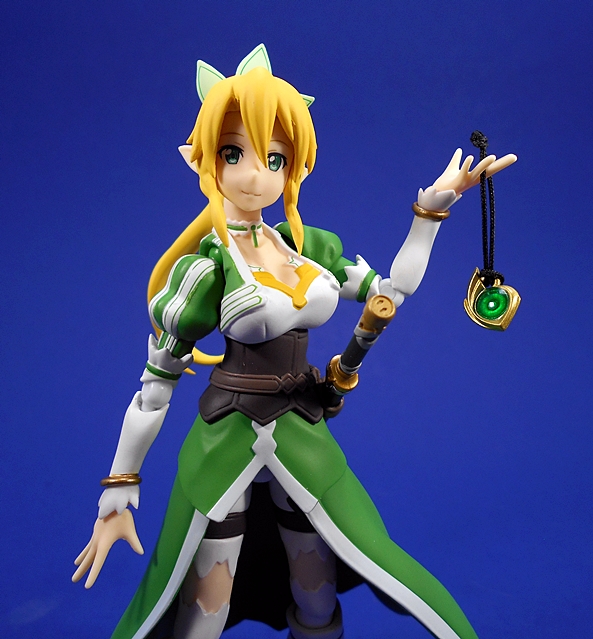 Leafa also comes with her amulet on a string. I like that they included this, but I can’t really get it to lay flat around her neck, so I doubt I’ll be displaying her with it. It’s just as well as in the anime she usually kept it tucked betwixt her ample bosom. She does look great holding it… the necklace, I mean, the bosom. 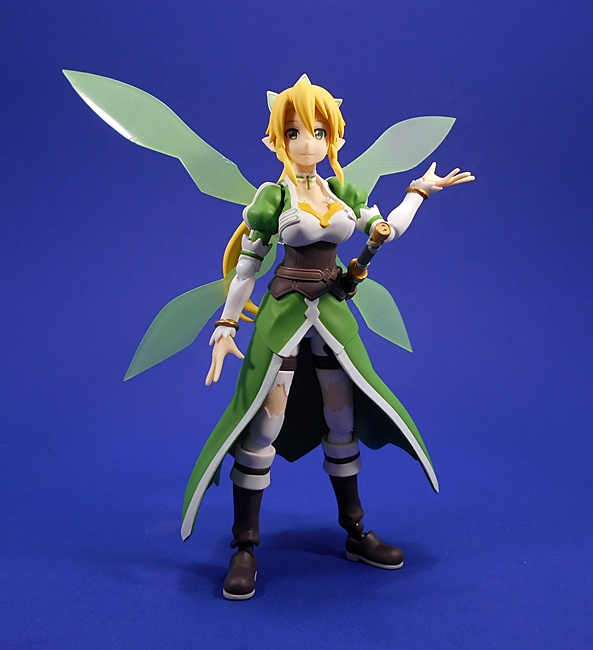 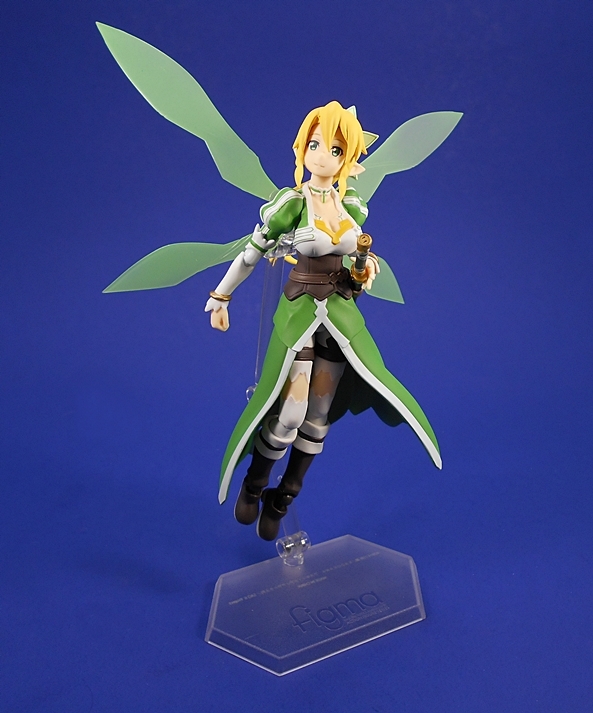 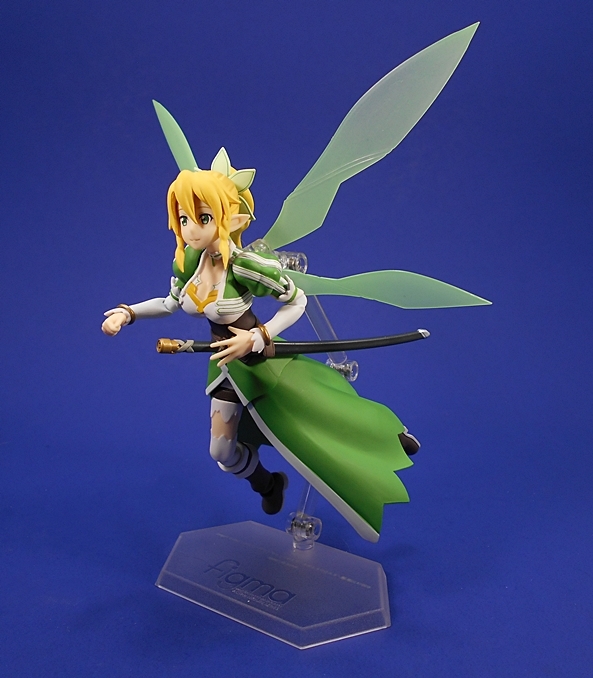 And finally, Leafa comes with her set of wings. These peg into her back, very much the same way they did with ALO Asuna. You can use either an independent peg, or an adapter to use with the included stand. The regular peg doesn’t do a very good job of holding them in, but they work perfectly with the stand. 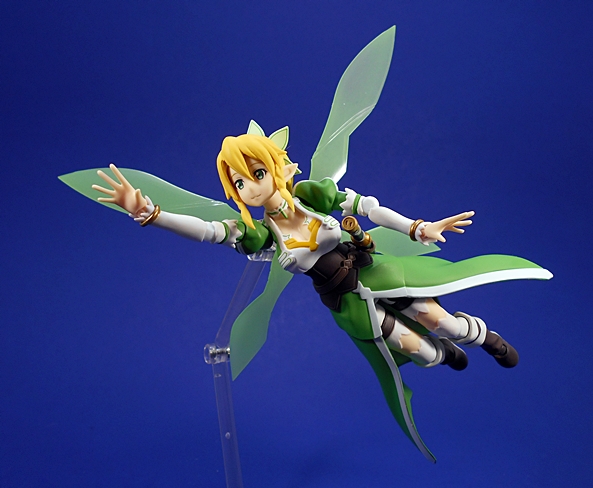 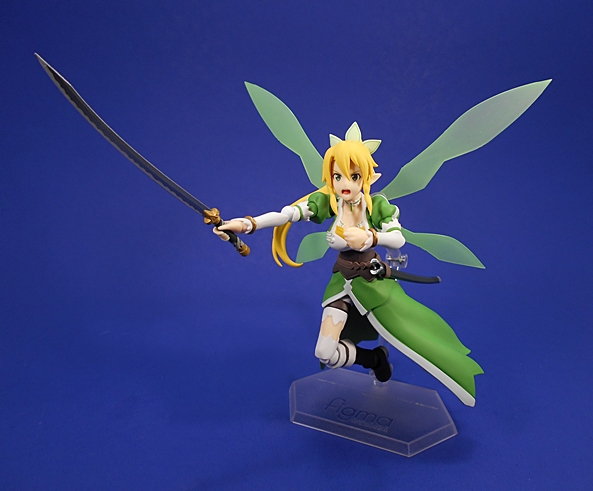 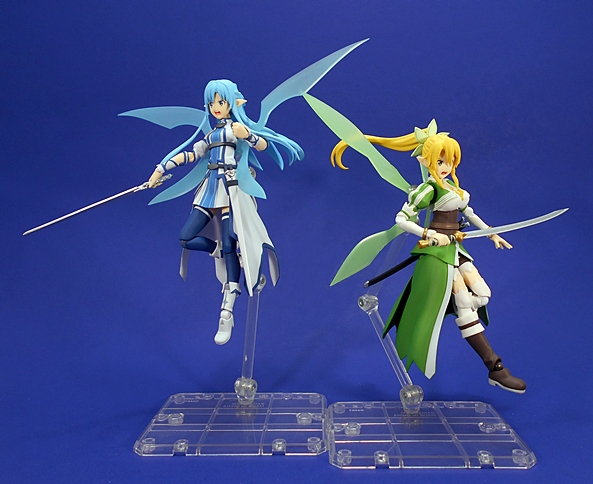 Leafa set me back around $65, a price which is admittedly getting a little steep for me. I don’t think it’s a bad value for the quality and all you’re getting, but with Figma prices all over the place, it feels odd to pay less for some of the KanColle Fleet Girls, which have a lot more accessories. Hell, it wasn’t all that long ago that I got Figma Link for like forty bucks. Then again, I’d bet even odds that Leafa may turn up for less after she’s been out a little while. Nonetheless, here was a case where I didn’t want to risk missing out while waiting for a deal, and after spending a morning playing around with her, I have no regrets making that decision.