What started as a humble line of indie comic statues, called Femme Fatales, has grown into quite the Marvel and DC branded juggernaut. Indeed, Diamond Select has been churning out these Marvel and DC Gallery statues at a remarkably brisk rate while expanding to include the dudes as well. At the same time, they seem to have a handle on balancing the compromise between budget and quality. I’ve amassed quite a few of the DC Animated Series and I’ve had few complaints. And if that wasn’t enough good news, DST is clearly willing to start taking risks with some character choices. And that brings us to one of the most recent Marvel Gallery releases: Medusa, matriarch of the Inhumans! 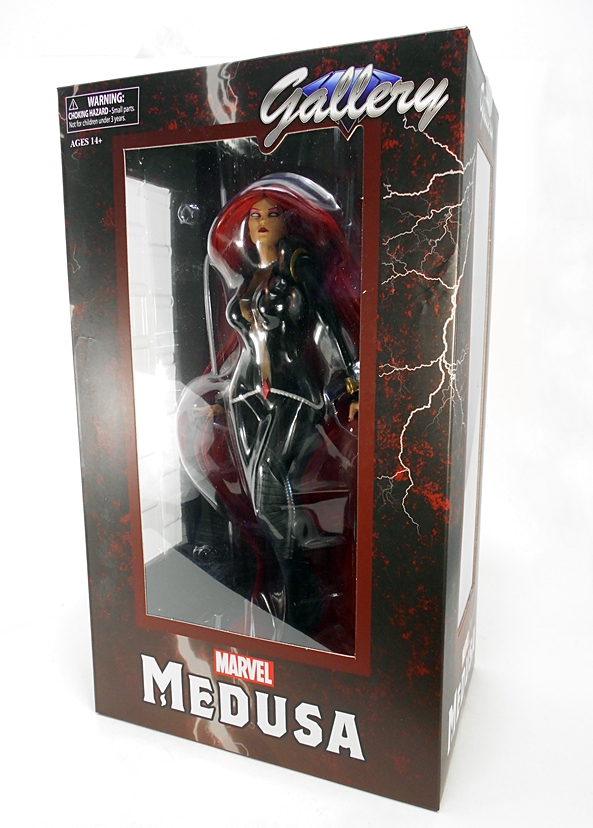 Now, granted, Medusa is far from an unknown in the Marvel Universe, but this line has mostly been about A-Listers, so including her is a welcome and unexpected treat. The statue comes in the same style window box we’ve been seeing ever since the first Femme Fatale statue hit the comic shops, although the decos are now branded to match the characters inside. You get windows on the front, side and top panels to let in plenty of light. Medusa’s box also has the added bonus of being crazy heavy. For what are roughly nine-inch scale PVC statues, these don’t tend to have a lot of heft to them, but as we’ll soon see, Medusa’s hair adds a lot of weight to this piece. The statue comes secured between two clear plastic trays, the box is totally collector friendly, and there’s no assembly required.

Out of her box, the Inhuman goddess is a remarkably striking piece.  She dons her black costume, which features a high gloss finish and a very low cut front that runs all the way down to her belt. The skin revealed by her exposed front is tinted black to suggest she’s got some kind of body stocking to protect her Inhuman goodies. She has a pair of matte black, ribbed boots, which come up past her knees and feature some rather interesting heel designs. The costume also features hold arched fixtures on her shoulders, gold wrist bracelets, a red jewel just below her naval, and a pearl belt and necklace. I just love what they did with this costume, and the little contrasts from matte to gloss and bits of gold, white, and red offer some nice diversity to what could have been a bit of a boring outfit. It also helps that the quality of paint and its application on this piece are top notch, right down to the red nail polish on her finger tips.

Of course, I can’t go far in this review without talking about her legendary copious coif. Medusa’s red hair cascades down her back and pools up below her feet to form a very creative base. The hair features sculpted texture and some subtle variations in color. I really dig how they designed this piece and the way the hair suspends her with her feet in mid air. There’s so much to love with this statue!

And I’m happy to report that the portrait is every bit as good as everything from the neck down. She’s got a beautiful portrait and the paint used for her lips, pupil-less eyes, and vibrant eye shadow is crisp and perfect. 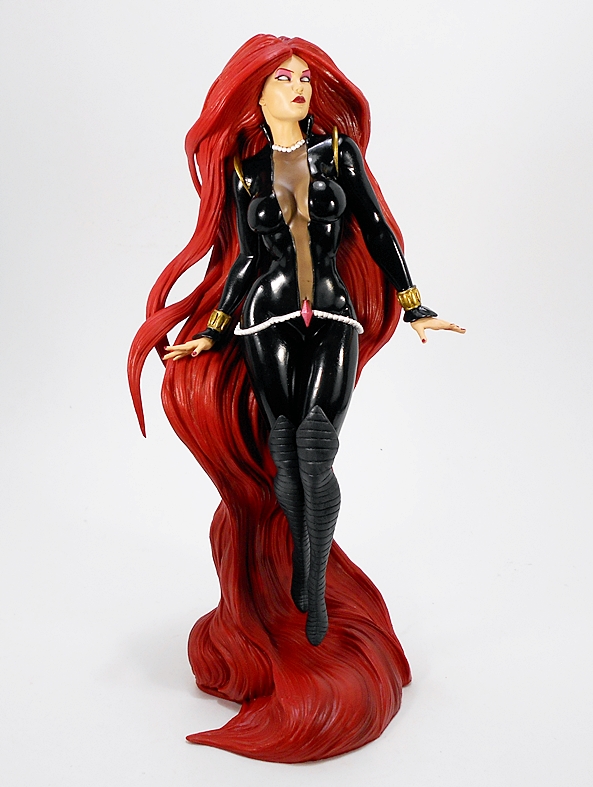 Normally I wait for a deal when picking up these statues, because they tend to get deeply discounted by retailers after they’ve been on the market for a couple of weeks. In this case, however, I really wanted to show my support for Diamond’s willingness to go with some less obvious character selection. To that end, I pre-ordered both Medusa and Jewel (aka Jessica Jones) at full price, which amounted to about $45 each. I’ll get around to reviewing Jewel eventually, but as far as Medusa goes, I couldn’t be happier with this purchase. Everything about this statue makes it feel like something far more premium than a budget statue and I could confidently place her among some of my $100 DC Cover Girls or Marvel Premier pieces and she could easily hold her own in terms of paint and overall quality.