After weeks of gushing, I’m finally at the very last figure in the initial wave of DC Collectibles’ Bombshells figures. I don’t think I’ve mentioned that these figures are numbered, but I didn’t go through them in that order. Instead, I saved my favorite one of the bunch for last, and yes it is indeed Harley Quinn! And that’s some high praise for Ms Quinn here, because this initial assortment has been rock solid all the way through. Let’s take a look… 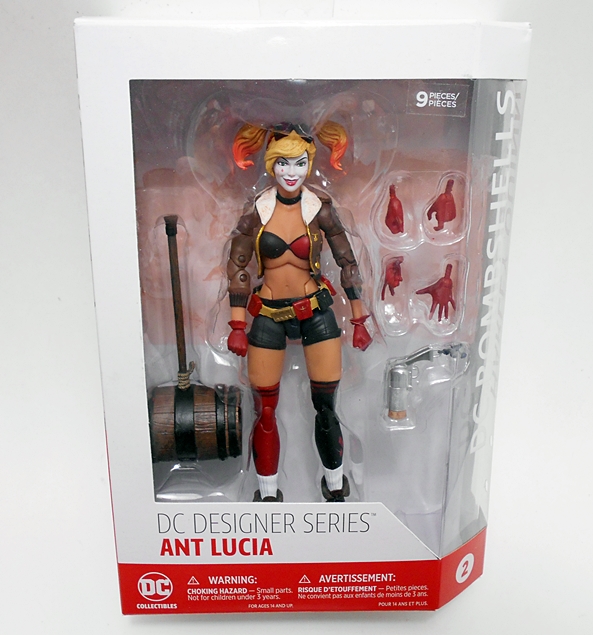 We’ve already had Batwoman the baseball player, Wonder Woman the propaganda poster gal, and Poison Ivy the pin-up queen. Bombshell Harley represents the nose art that often showed up on WWII bombers and really epitomizes what this whole concept is all about. The package is the same as we’ve seen three times already, so I’m not going to dwell on it. I’ll just say that I’ve actually saved the boxes for these figures, which is something I hardly ever do. 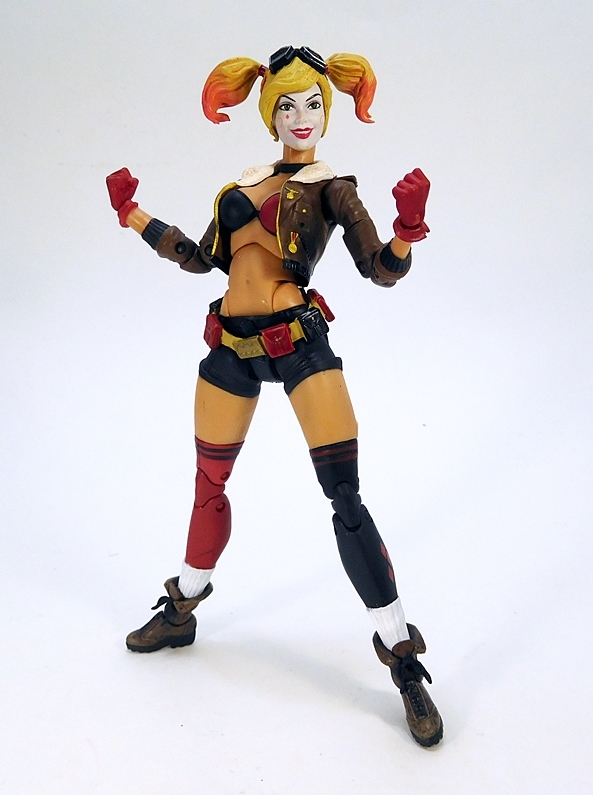 And here she is! Harley sports a cool WWII-era bomber jacket, capped off with a fur-lined collar, red aviator gloves, and a skimpy red and black top. From the waist down she has a very short pair of shorts, red and black thigh-high stockings and adorable little socks and boots. The ensemble is finished off by a simple black choker and a re-purposed Batman utility belt with the pouches customized with red and black paint. I love this costume. It captures the feel of the era, while still preserving Harley’s signature look. The paint is pretty sharp too, the plastic used for the skin tone looks great, and the finish on the jacket and the boots looks particular fantastic. 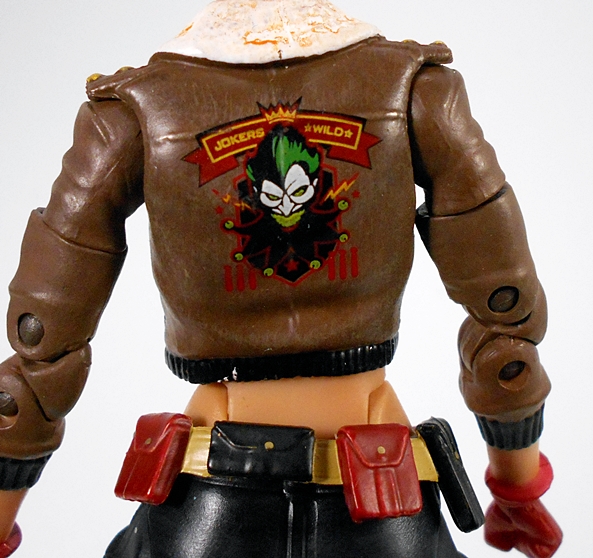 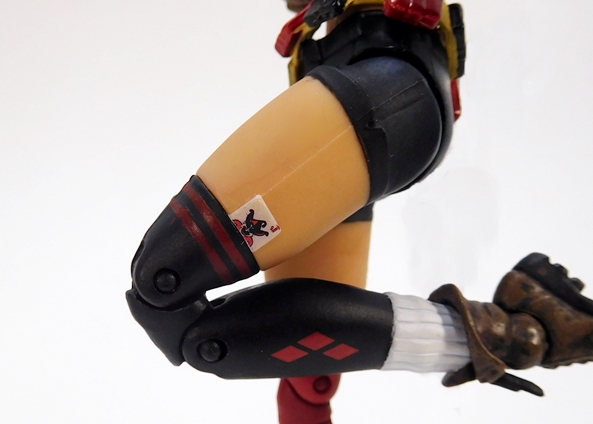 There are some wonderful details here too. The front of the jacket features some painted metals, and you get some really cool “Joker’s Wild” artwork across the back of her jacket. She even has a playing card tucked into her right stocking. And yup, it’s The Joker! 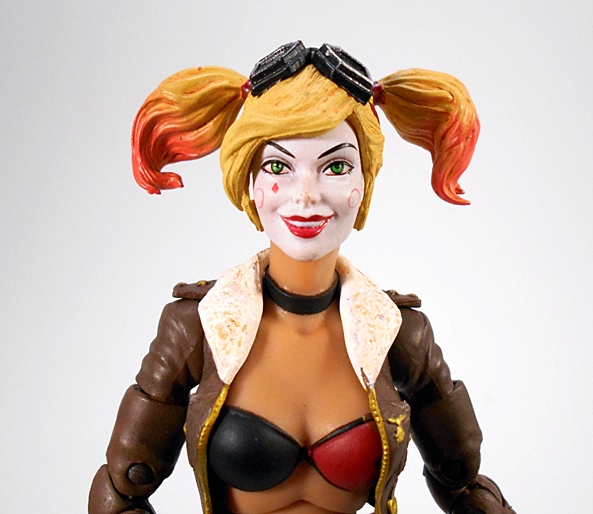 The portrait is also excellent. Harley features yellow hair with fiery tips on her pigtails and a pair of aviators goggles perched up high on her head. Her face is painted white and she’s got beautiful green eyes and bright red lips. It’s both instantly recognizable as Harley, and yet still manages to feel like a fresh and original take on the character. The circles on her cheeks and the little diamond under her eye are nice touches. 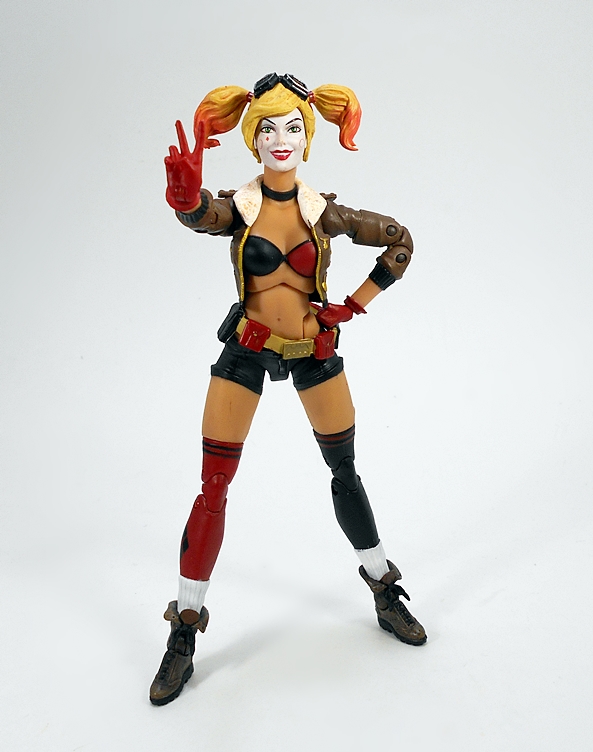 The articulation here is pretty much identical to that of the other Bombshells, which makes Harley a super fun figure to play with. The arms feature rotating hinges in the shoulders and wrists, with swivels in the thighs, and double hinges in the elbows. The hips are ball jointed, there are swivels at the tops of the stockings, double hinges in the knees, and the ankles have hinges and lateral rockers. There’s an ab crunch hinge and a ball joint under the chest, and the neck is ball jointed. She also comes with three pairs of hands, which include fists, accessory holding hands, a right hand with two fingers up, and a left hand with relaxed fingers. 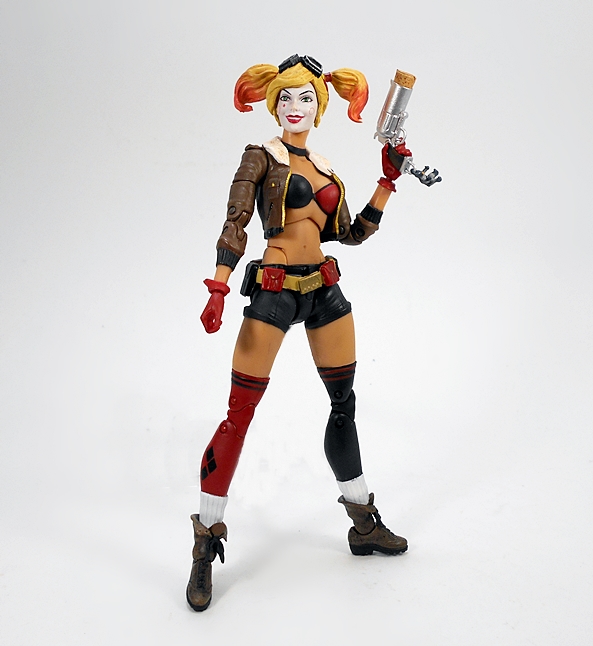 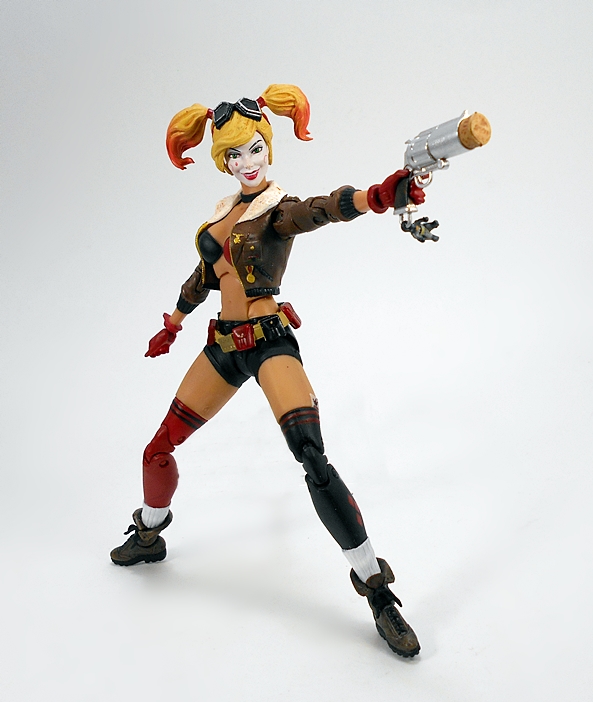 As for accessories, Harley comes with her trademark pop gun. I have a lot of Harley figures in my collection and a lot of them come with their own versions of this accessory, but this particular one is the best I’ve seen. The paint work is on point, with a silver, metallic finish and a very realistic looking cork in the barrel. It also has a Batman charm dangling off of the lanyard ring! 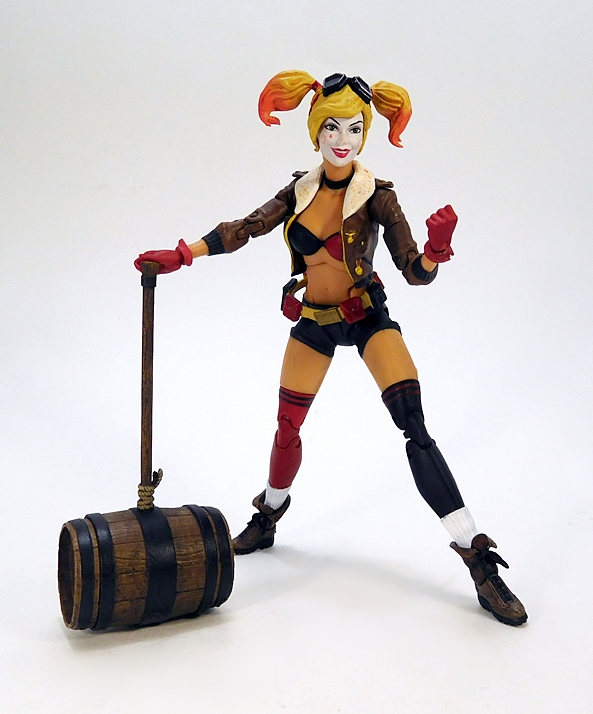 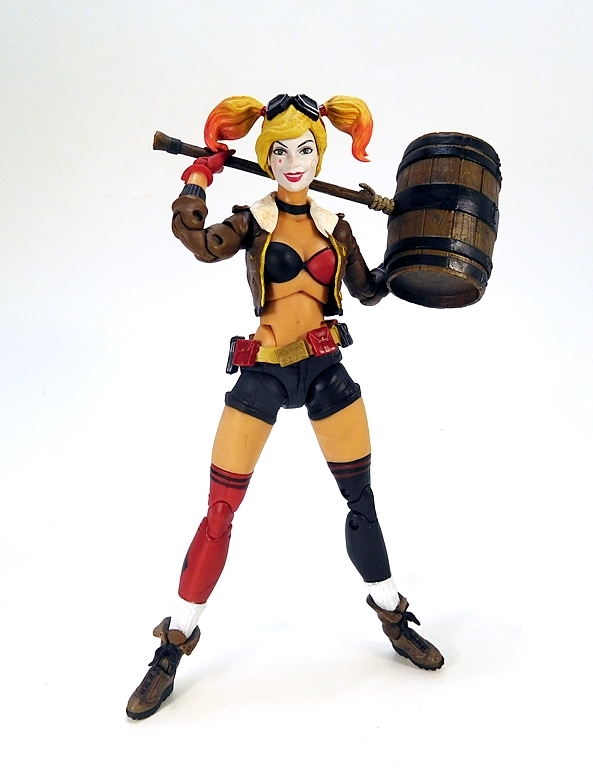 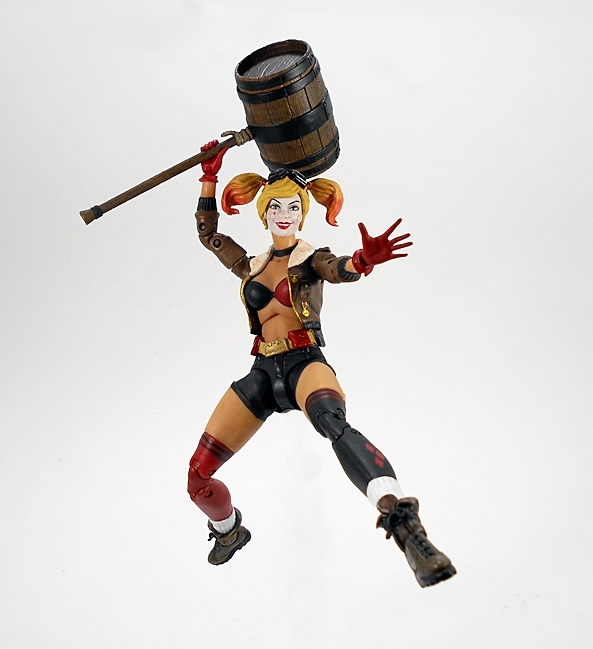 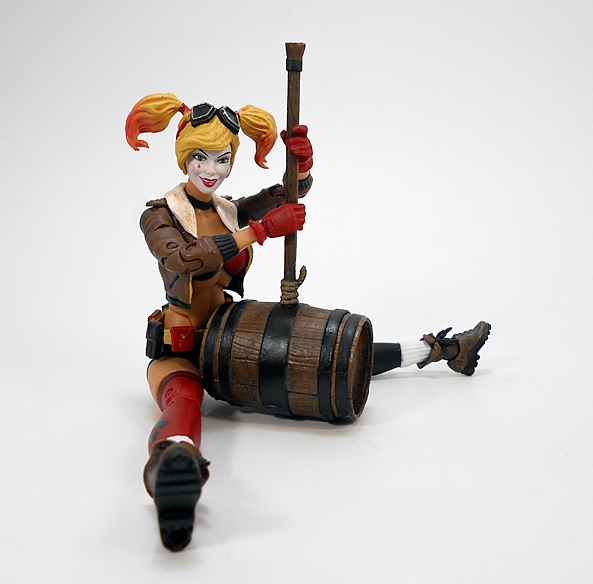 And it wouldn’t be Harley without a giant, obnoxious hammer! This one is basically a barrel with a handle on it. Once again, the quality of sculpt and paint on this piece is exceptional. The individual planks that make up the barrel are sculpted with some pretty realistic wood grain texturing. There’s even sculpted rope wrapped around the shaft where it meets the barrel. It’s a comically huge and heavy weapon, but Harley can hold it pretty well. 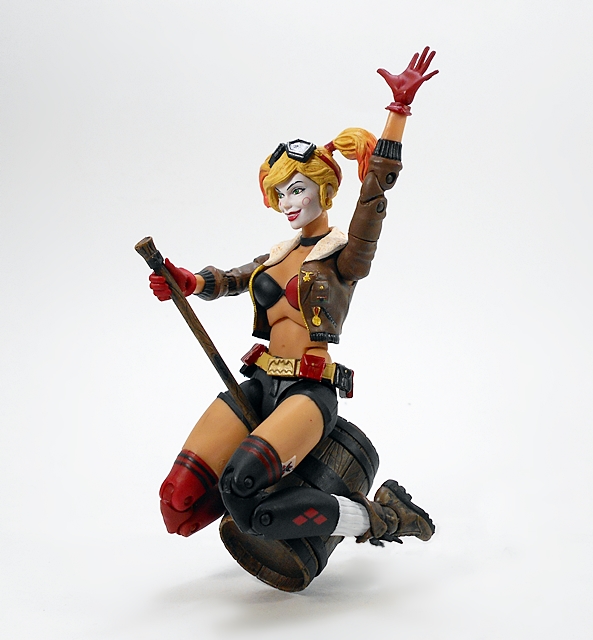 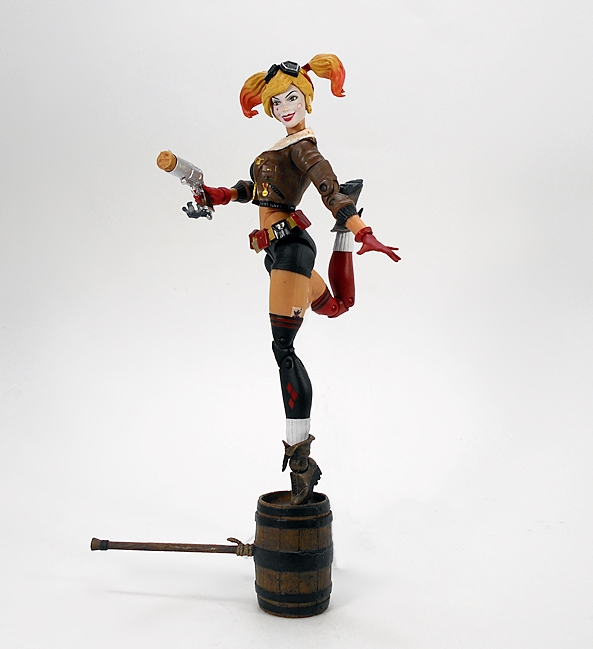 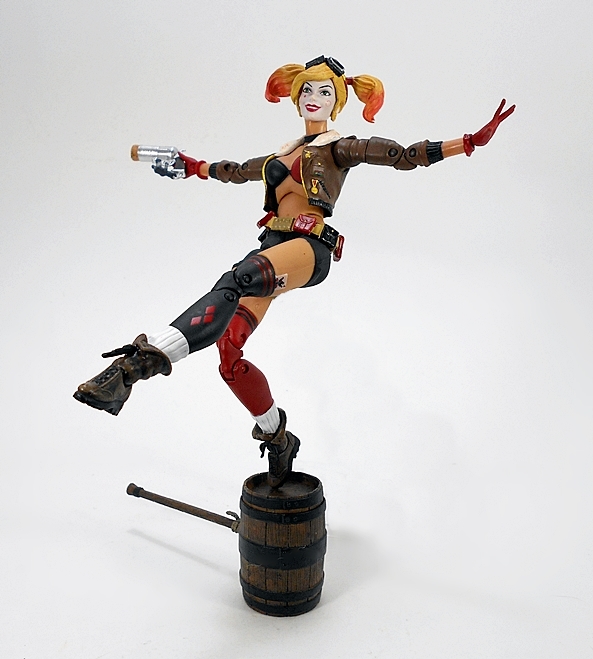 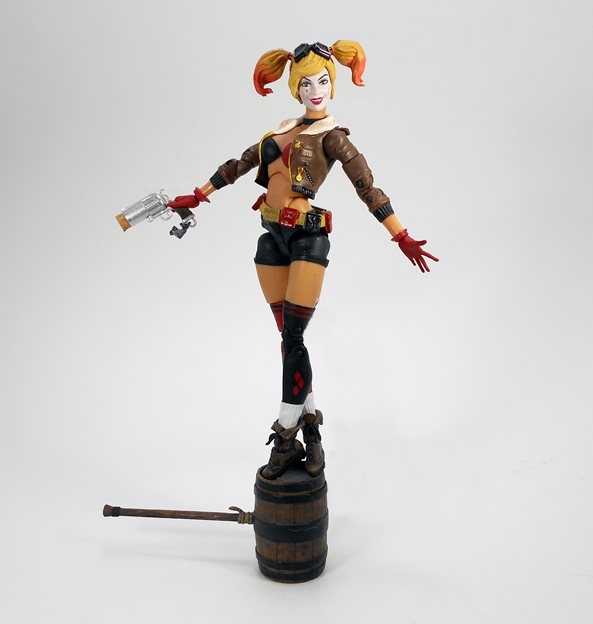 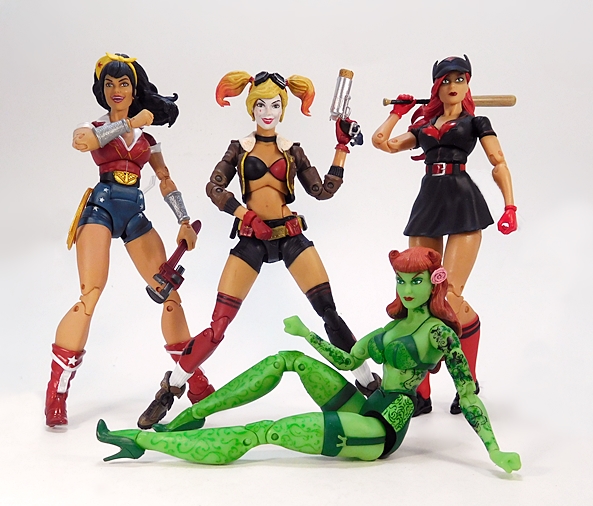 Harley is yet another outstanding figure in what has been an all around amazing wave of figures. I’ll confess that I’ve been looking forward to these ever since they were first solicited, but this is one of those cases where the final product exceeded my very high expectations. These figures manage to take all the great stuff about the Bombshells statues and effortlessly combines that recipe with the sheer joy of some wonderfully articulated action figures. The sculpt, the paint, everything about these gals have come together perfectly and I simply cannot wait until wave two finally ships. I’m still a little sore at you, DC Collectibles, for shit-canning so many of the DC Icons figures. But if you keep this line going, all will be forgiven.