I do indeed love me some Fate/Stay Night. It’s one of those anime series that I’ll watch over again, even though I have a dozen new series waiting on my “to watch” list. That’s probably why I’m so far behind. Well, it’s only natural that love spilled over to Fate/Extra when it released on the Sony PSP. I thought it was a miracle the game was localized for US release and jumped on it right away. In the end, there was a lot I liked about it, and a lot I didn’t. Fast forward to now and Fate/Extra is poised to get an anime series treatment in the form of Fate/Extra Last Encore. Oh, and we also got this new Figma release of Caster from Max Factory! 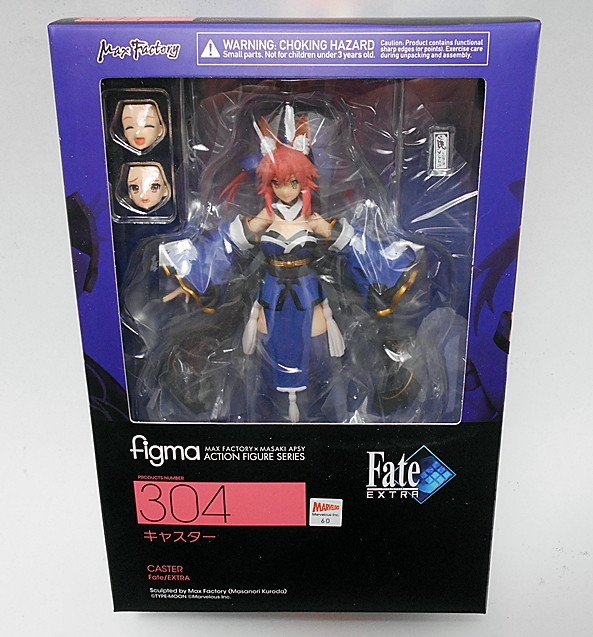 As unlikely as getting a US localization of the game was, getting figures from the game is just mind-blowing to me. Caster comes in a pretty typical window box. It’s numbered as #304 on the front and features shots of the character on the side panels and plenty more on the back. Everything is collector friendly, and that’s a good thing because, as always, there are quite a few bits and bobs inside that you’ll want to keep track of.

And wow, I absolutely love how they recreated Caster’s outfit here. Granted, the character is rendered in 3D in the game, but I still wasn’t sure how this costume would translate to plastic form. Well, the answer is, beautifully! As one can imagine, it’s not exactly practical when it comes to character movement. For example, when you render those puffy sleeves in plastic, they tend to get in the way, but thanks to some strategic ball joints, I’m still pretty satisfied with how they’ve managed to salvage some decent arm movement, despite of such an impractical design. Even the flowing black flaps are set on ball joints to allow them to be posed out of the way as needed. And speaking of impractical designs, she’s sporting some crazy platform shoes.

And yup, she’s sporting her big and bushy fox tail, and it’s proven to be the most frustrating thing about this figure. It simply will not stay in place. Seeing as how the peg is mounted on a ball joint, I’m tempted to tip it in with a little glue. And while I’ve always found Figmas to be exceptionally well balanced figures, Caster’s tail makes her decidedly back heavy, which is no small feat considering that she isn’t exactly packing light in the chest region. I was able to get her to stand on her own, but it can be a frustrating affair. Thankfully, you get the usual stand, which sockets into the hole in her back. I should also note here that the coloring on this figure is absolutely gorgeous. The blues and black and gold leaf all go so well together. Toss in that orange fox fur and her warm skin tone and you get a figure that is most definitely pleasing on the eyes!

Caster comes with three different portraits, and these are all pretty standard Figma fare.  You get a smiley face, a worried face, and a super happy, playful face. These are swapped out the standard way, by removing the front of the hair. And yes, the adorable fox ears stay on as they are sculpted as part of her head. 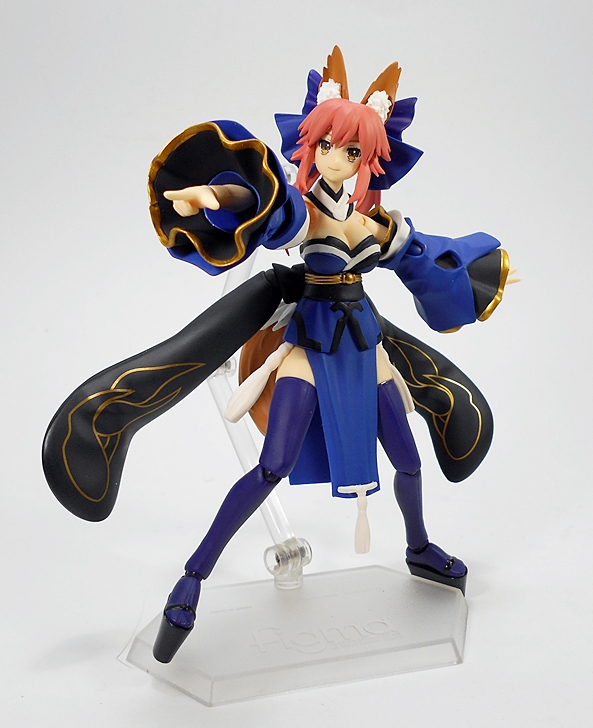 You also get a bunch of hands, although this is one figure where I’ve found that I didn’t have a lot of desire to swap out the hands. Her stock hands are great for spell casting, and those are the ones I’ve left on her most of the time. You get a pair of fists, which are hard to even see buried in those sleeves, a pair of pointing fingers, which are useful, and then some that are designed to work with her accessories. 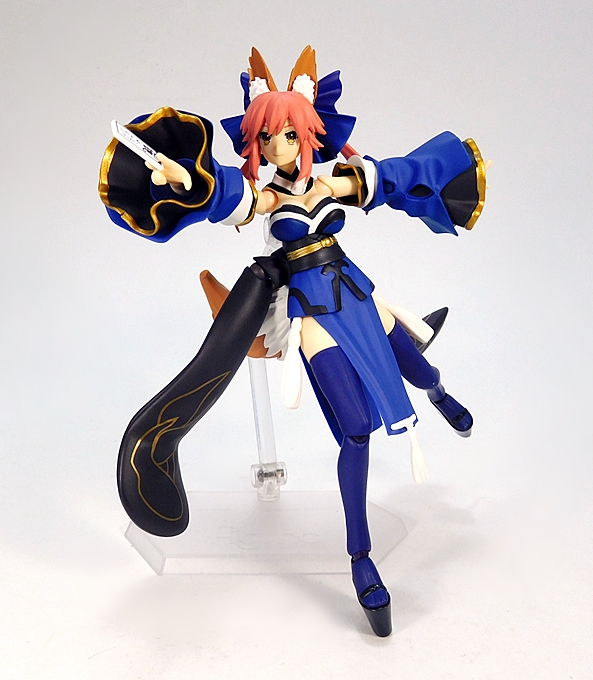 The first of which is one of her charms. It’s super tiny and designed to fit between the fingers of either one of two specialized hands. There’s printing on one side. 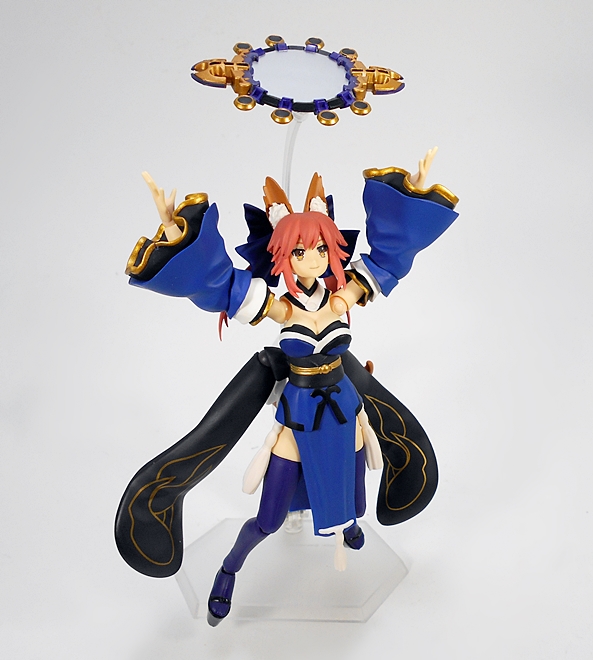 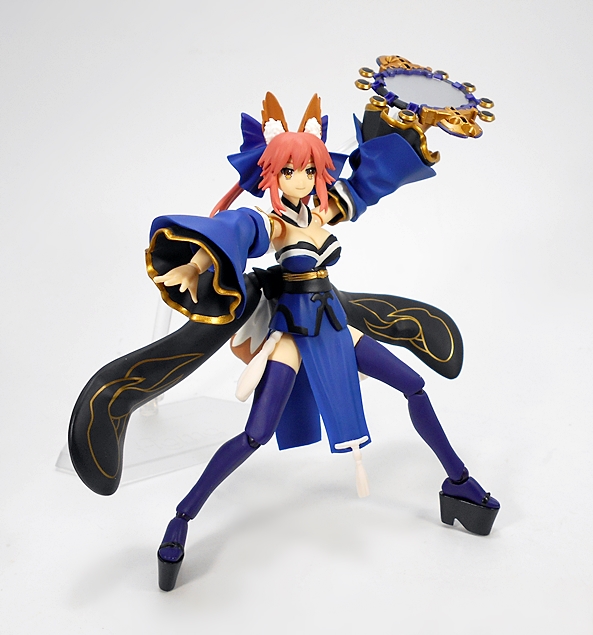 Far more impressive is her Noble Phantasm mirror, the Eightfold Blessings of Amaterasu. This piece includes its own stand, plus an extra arm so that it can be attached to the figure stand and made to levitate around Caster to simulate her attacks. You do get some hands that look like they are designed to hold it, but they don’t work too well, and in fairness most of the time Caster is commanding the mirror she isn’t actually holding it. With that having been said, it’s a super fun accessory. 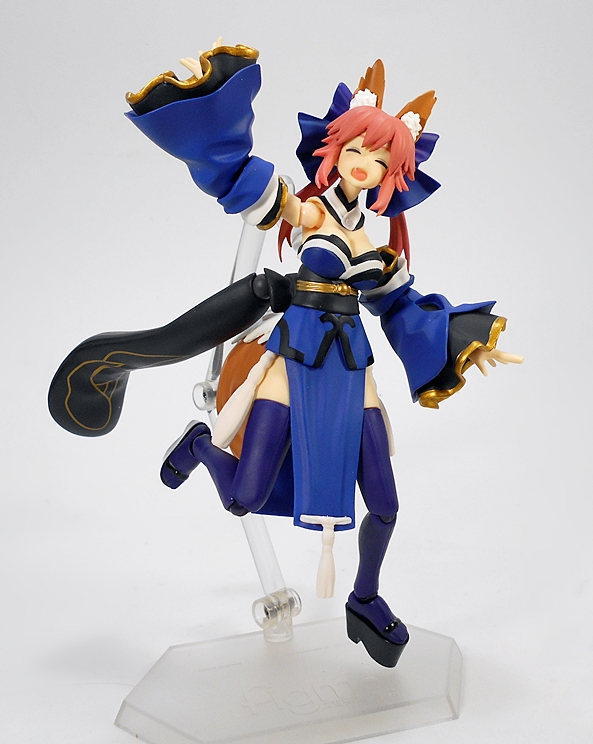 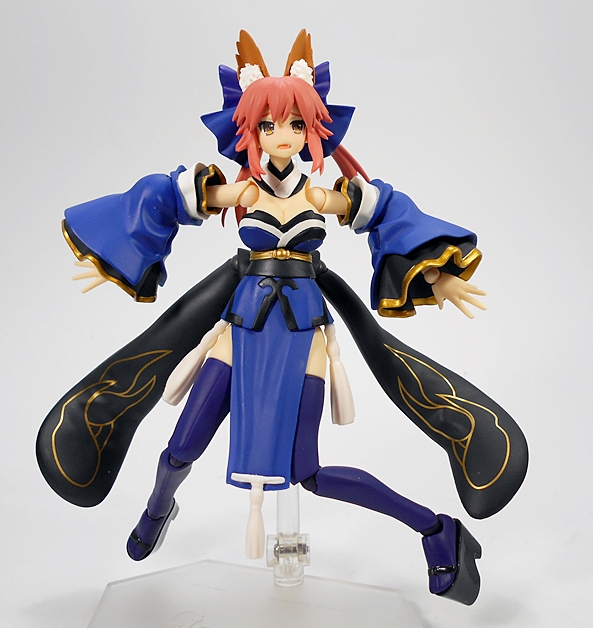 So yeah, it’s crazy that we’re getting Figmas from Fate/Extra, and doubly so that we’re getting them strictly off the game and before the anime even comes out. But I’m not complaining. I seem to recall seeing images of Saber from the game as well, but I can’t remember if she’s out already or yet to be released. I’d look into it, but right now, I’m more interested in getting the re-issue of Saber from Fate/Stay Night when she comes out, not to mention Archer as well. As for Caster, well it was more my love of her character design than than anything else that made this figure irresistible to me. Although I will say that playing around with her has made me want to pop in the Fate/Extra UMD and give it a spin again.