If you follow me on Twitter, than you probably know that I loved Guardians Vol.2. You also probably know this if you’ve been anywhere in my general vicinity. God help you if you’re stuck in an elevator with me, because I’ll keep saying, “And remember that time when [insert character here] did/said that thing?” until you inevitably swallow your own tongue for sweet release. All the characters did their part to make this movie a sheer delight, but Drax continues to shine as one of the most pleasant surprises of this entire franchise. And as such, David Bautista deserves to have praise heaped onto him for the amazing job he has done breathing life into the character. Even doubly so when you consider his limited experience as an actor. And seeing as how my Hot Toys Drax figure has now been delayed a half dozen times, I now look to Hasbro’s Marvel Legends for more plastic Drax loving. 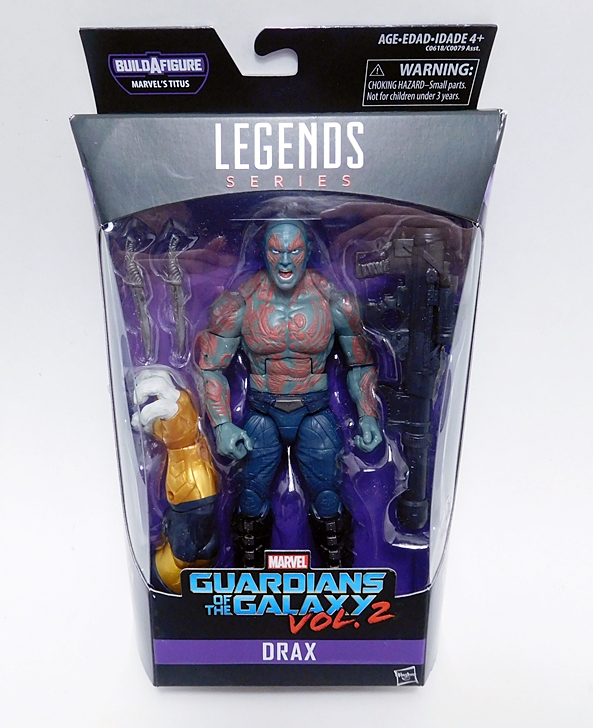 We’ve seen the packaging already. The three figures from the film are branded with the movie title and Drax here comes with a fair amount of goodies laid out in the tray, including a BAF part for Titus. I’d like to tell you that this review is going to be a balls-to-the-wall love fest, but unlike the character, this figure lets me down on a few levels. Let’s take a look… 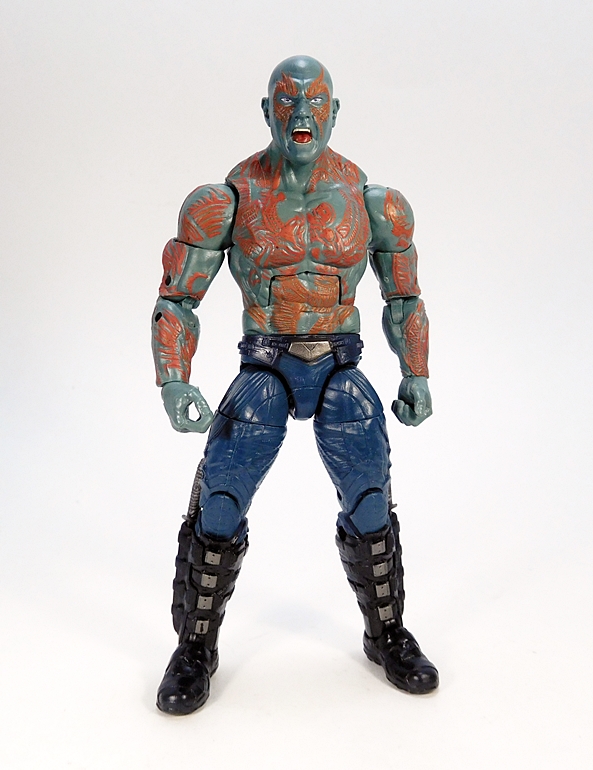 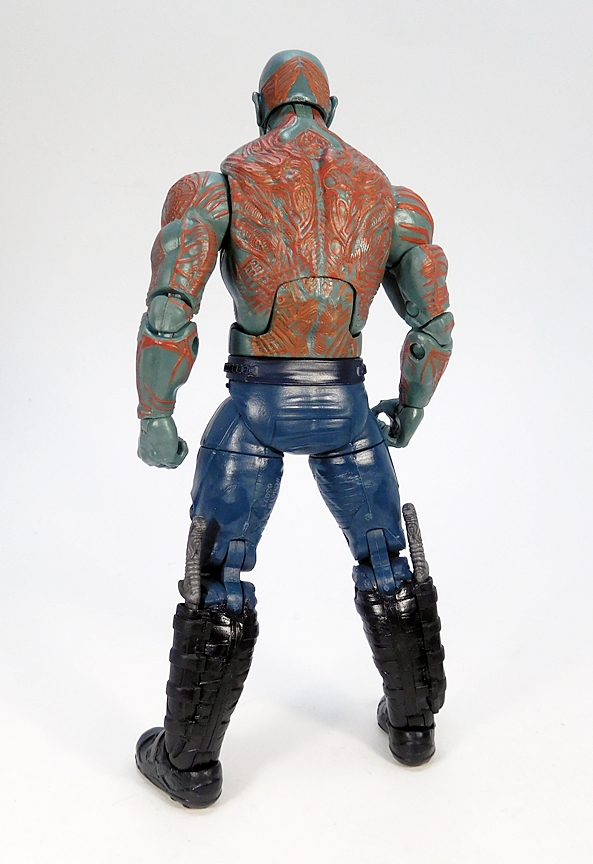 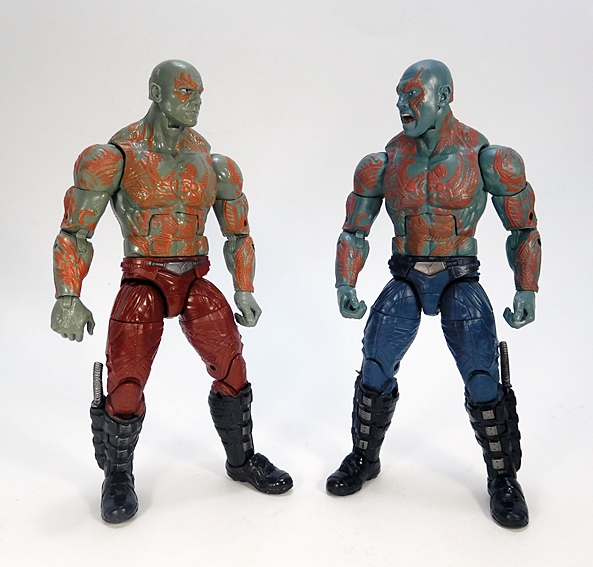 So, from the neck down, what we have here is a total reuse of the 2014 Drax figure from the first film. The pants are now blue, the boot buckles are a little brighter, and his skin is an entirely different shade of green. Other than that it’s the exact same figure. Now, I don’t really have an issue with them reusing the body. It was a great sculpt than and nearly three years later, it’s still a great sculpt. There’s plenty of detail in the boots and trousers, and the way Hasbro sculpted his tattoos onto the buck really has to be commended because it looks fantastic. As for the skin recoloring, well it’s hard for me to make a call on which is screen accurate because Drax’s skin tends to vary depending on the lighting. I suspect this newer one is more accurate and the fact that the plastic has more of a matte finish is cool, but I actually tend to like the skin tone on the original figure more. That’s just personal preference. 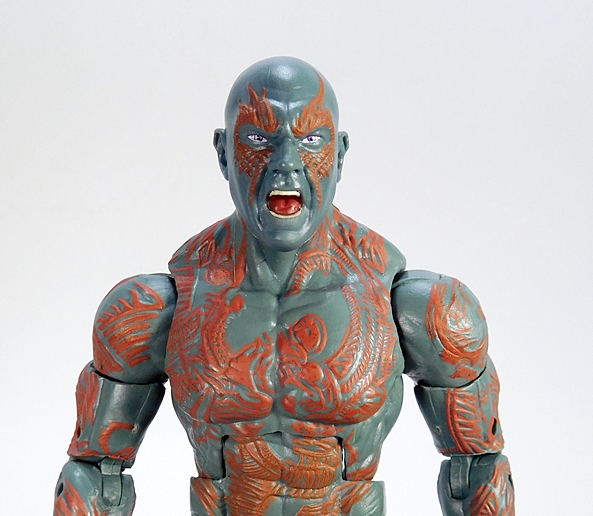 The new sculpting here comes in the form of a brand new head and this is an angry and yelling Drax. It’s certainly a departure from the more neutral expression on the previous Drax figure and it’s a fairly decent likeness with some excellent detailing and solid paint work. Of course, I think if we were going for an accurate Guardians Vol.2 Drax they should have made him laughing, because he really does spend a lot of that movie laughing his ass off. Anyway, the biggest issue I have here is that given the change in skin tone, you can’t really swap heads between the two figures and make it work, and to me that’s a bummer. Hasbro could have rectified this by tossing in the old head with updated coloring, but that didn’t happen. I guess my issue here really isn’t with what we got, but with what could have been. 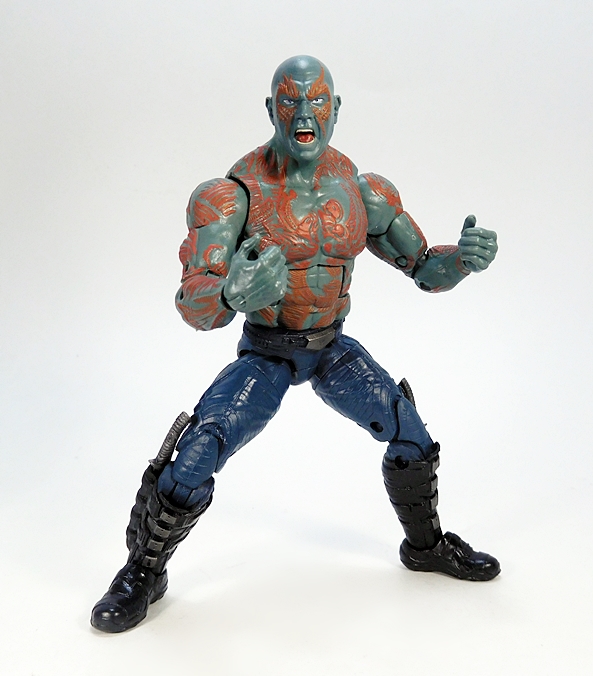 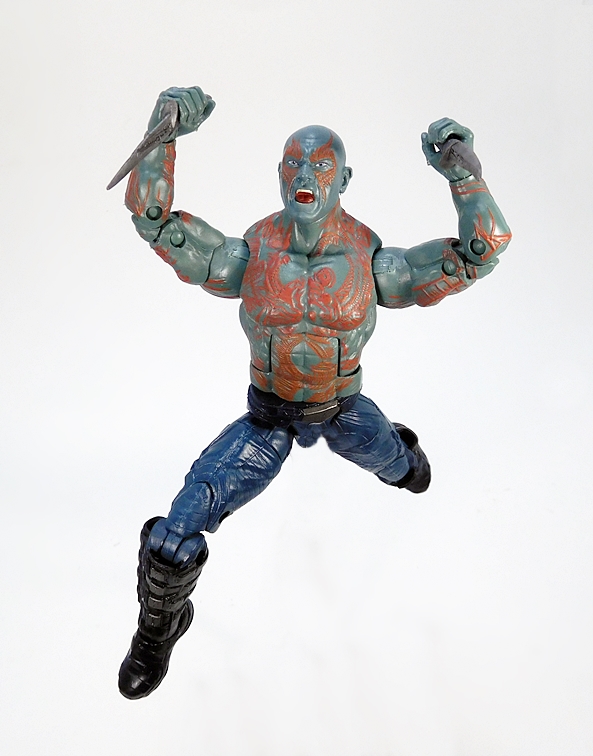 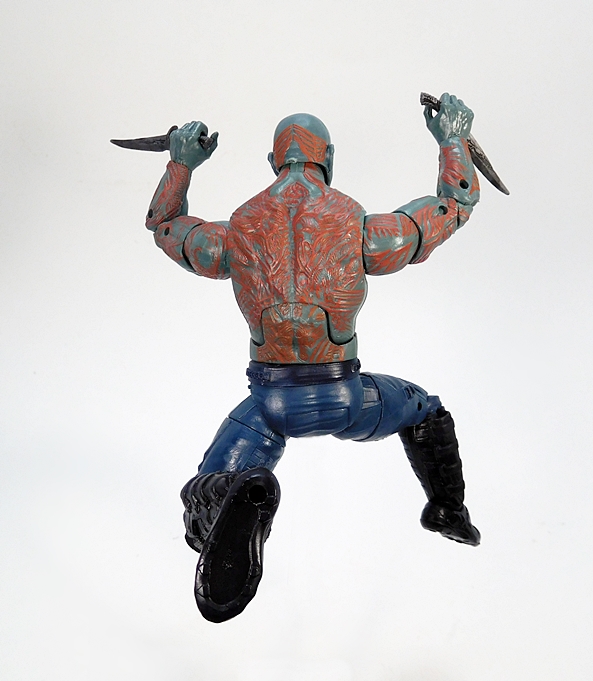 Obviously, the articulation here is identical to the previous release and that means it’s plenty damn good. The arms have rotating hinges in the shoulders and the wrists. The elbows and knees have double hinges. There are swivels in the biceps and thighs. The ankles have hinges and lateral rockers. Lastly, you get a swivel in the waist, an ab crunch hinge in the torso, and both a hinge and ball joint in the neck. The joints all feel great and there are no gummy hinges. 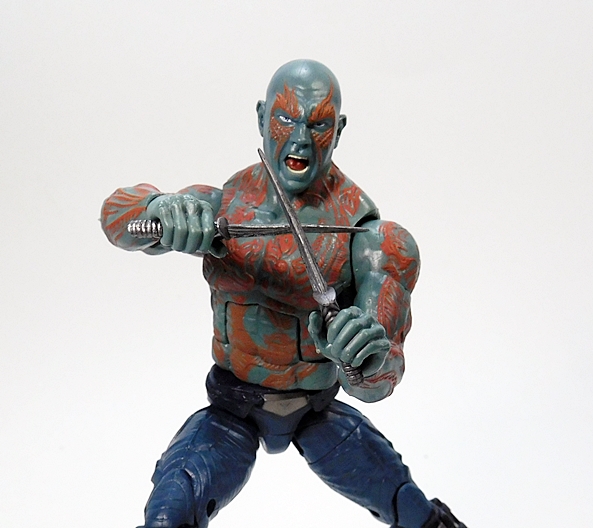 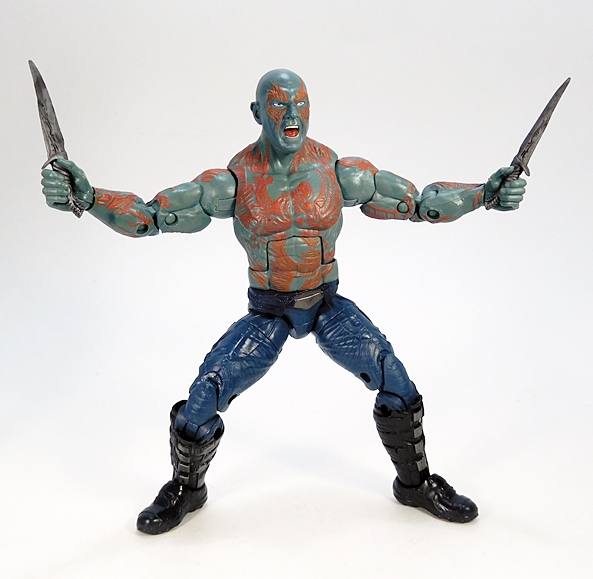 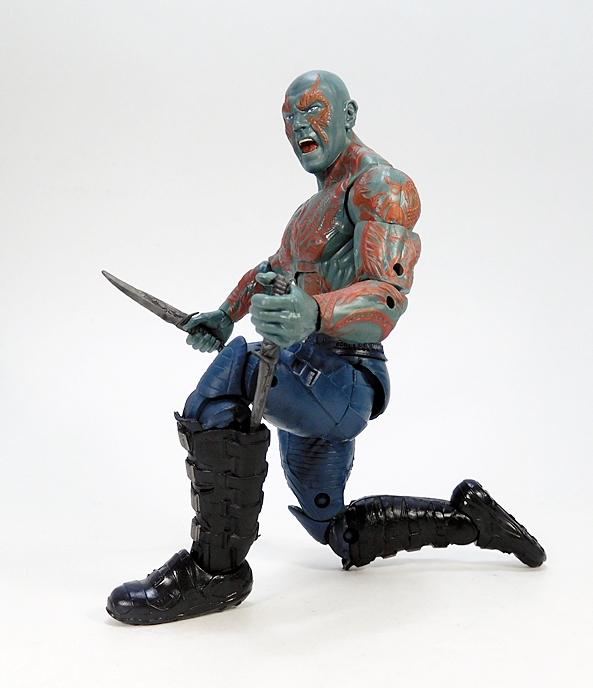 As you may have guessed, Drax comes with his pair of knives and they are indeed the same accessories that were included with the 2014 release. They’re nice sculpts, they could have used a little paint, but I’m not going to make a big deal about it. And yes, they still fit into the sheathes that are sculpted into the sides of his boots. 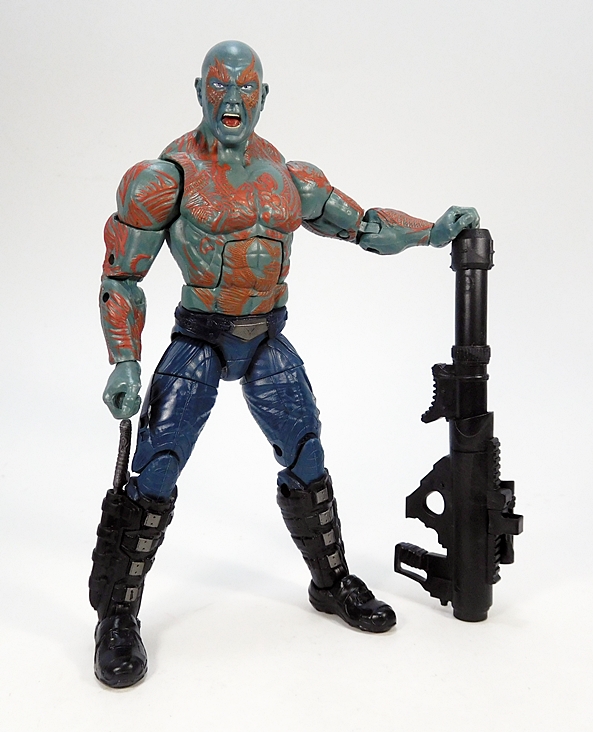 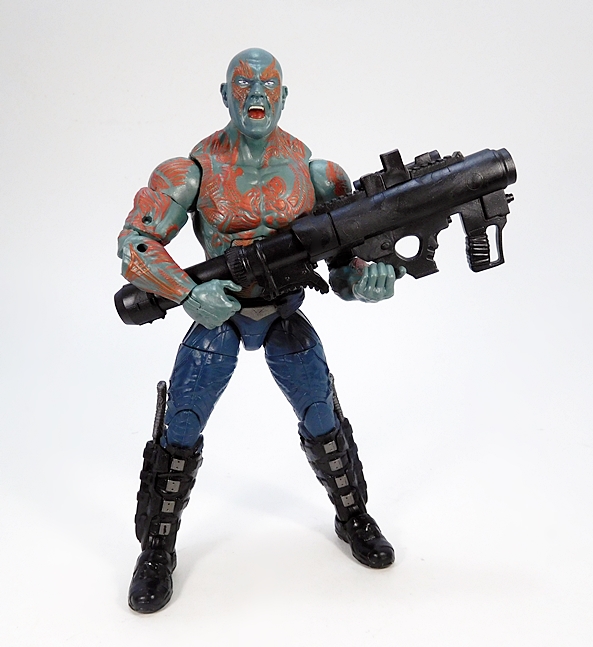 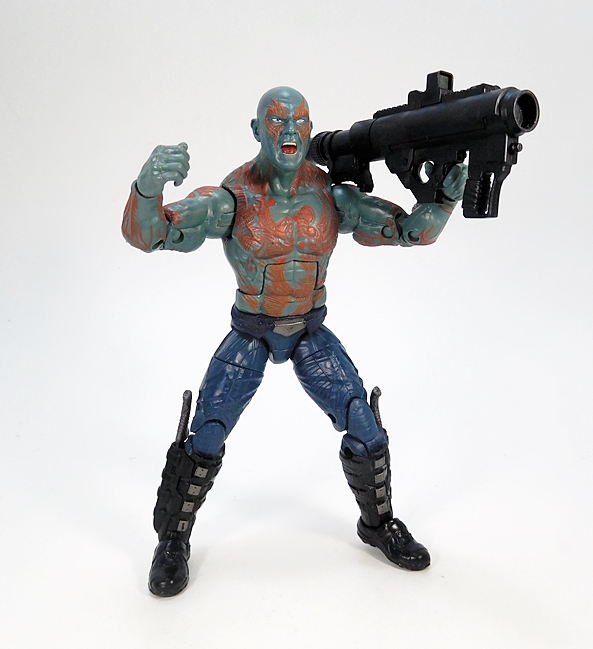 You do get a brand new accessory, which is his bazooka. It’s fairly detailed sculpt, but it’s all cast in black plastic and there are no additional paint apps. I’ve said it before, but if Hasbro is going to do big weapons for this scale, they really need to bust out the paint, otherwise it just looks damn cheap. I understand paint apps are often the first things cut when costing out a figure, but this is an almost entirely reused sculpt, so it’s hard to see where the money went. Anyway, the bazooka is a rather unique and fun design, and he can hold it pretty well in one hand with the back resting on his shoulder. 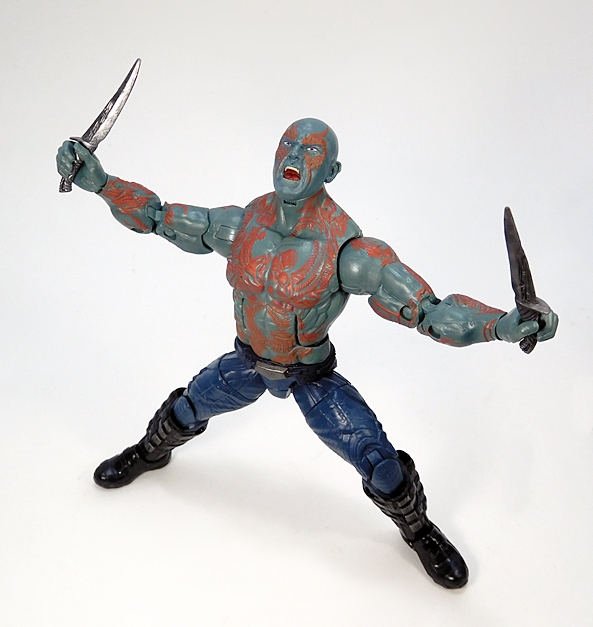 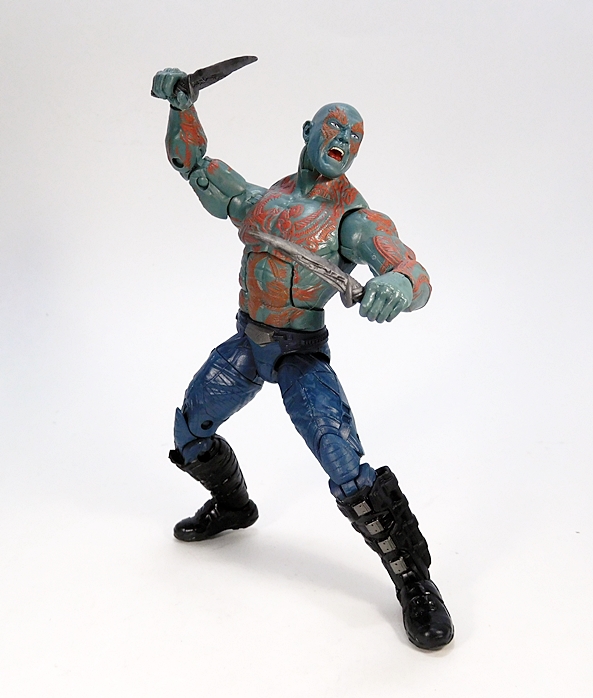 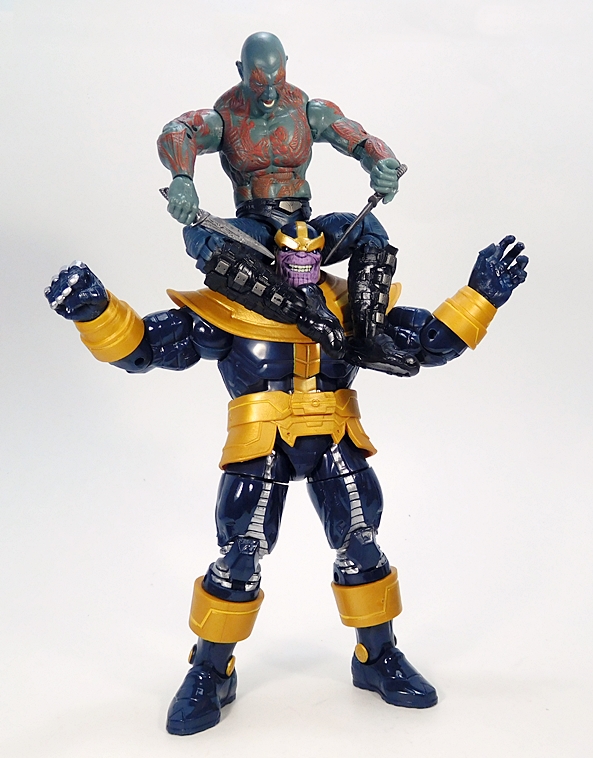 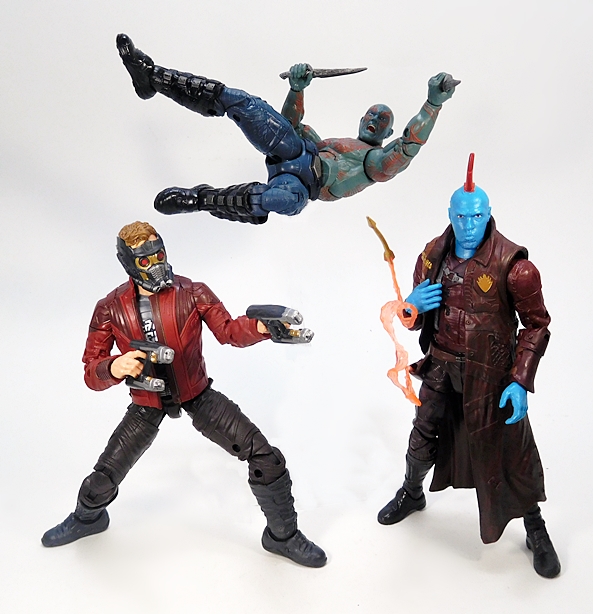 Am I too harsh on this figure? Possibly. I do like it a lot, but then I liked it a lot three years ago too. My guess is that the average collector’s mileage will vary depending on whether or not it’s they’re first MCU Drax. If you missed out on the last one, this is a fine substitute. I like the screaming head, but I would like it more if it was an optional portrait and not the only one. And like I said, you can’t swap it with the 2014 Drax head because of the color change. I didn’t feel at all bad about buying a new Star-Lord figure. It’s a new look and the heads are swappable between the new figure and the old one. Drax, on the other hand, feels a lot more like double-dipping.