Last week, I started looking at the last wave of NECA’s wonderful Heroes of the Storm line with the Orc Warchief Thrall. Today, I’m pressing on by opening up Sylvanas. It’s the last Warcraft-based figure in the line, and that makes me a very sad little Murloc. 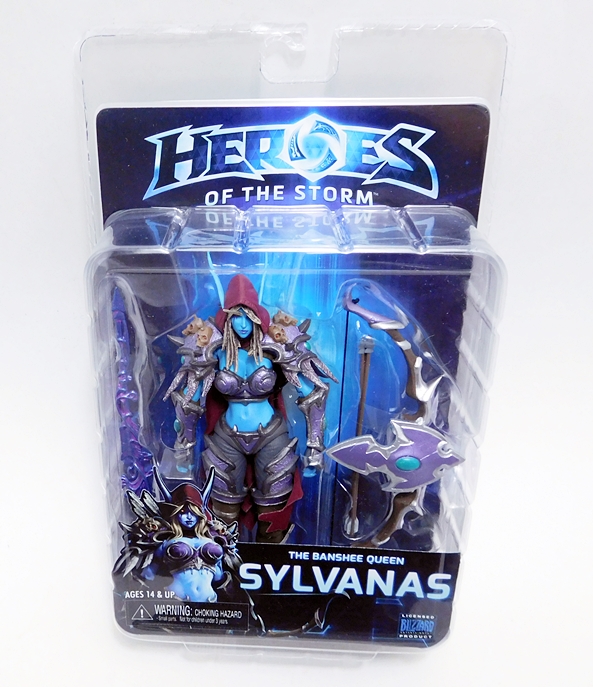 Ah, but check it out! It’s the sexy and deadly Ranger-General of Silvermoon, Sylvanas Windrunner, now known as the Banshee Queen of the Forsaken. Give me a moment to unsheathe my Sin’dorei Warblade, slice open her sealed prison and release her. ACK! I HAVE UNLEASHED THE NOXIOUS PLASTIC GASSES!!! 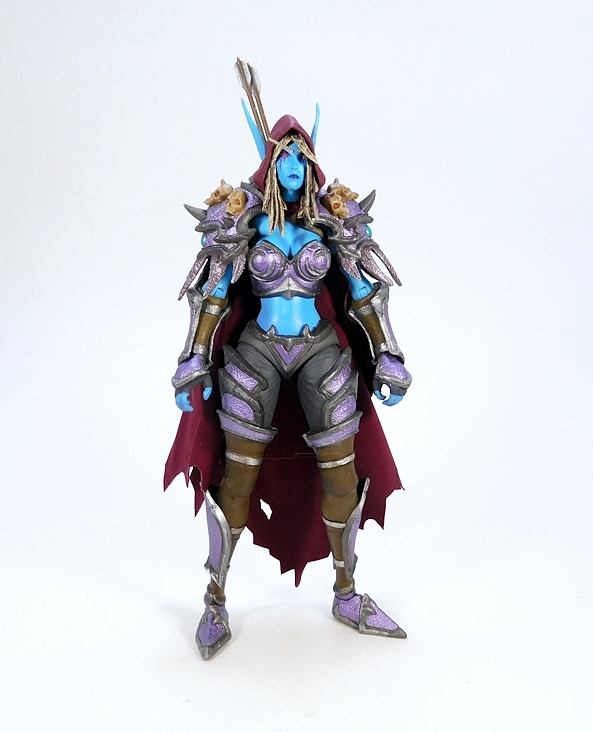 Once again, NECA really knows their way around the Warcraft aesthetic and have done a beautiful job bringing this figure to life. She’s their first female from the Warcraft universe and still manages to retain her shapely form while including the jagged and somewhat bulky armor that is so popular in the realm. Sylvanas features beautifully sculpted armored boots, gauntlets, and shoulders, with some added plates on her thighs and to cover her blood elf bewbs. Her midriff and ample cleavage are, of course, exposed, because who would ever take advantage of that in battle? 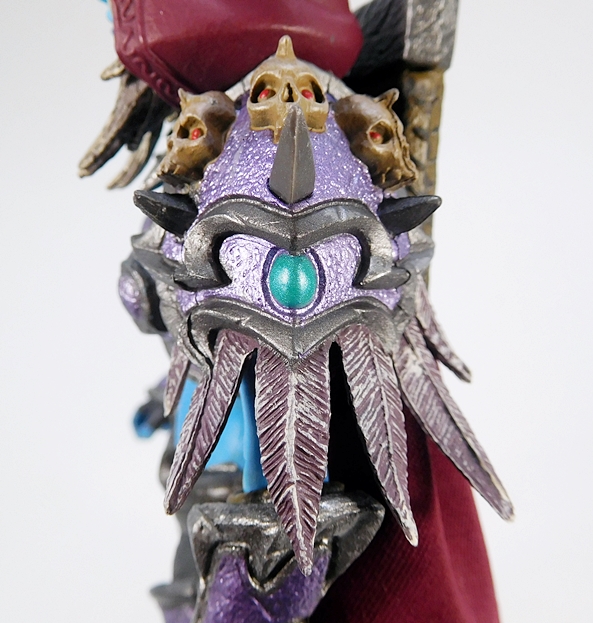 As with Thrall, the illusion of layered gear on this figure is very well done. The armor pieces are all part of the sculpt, but thanks to the carefully detailed underlying clothes and the sculpted straps and buckles, I could almost be convinced that she’s actually wearing the armor. The attention to detail in the shoulders is particularly exquisite. All the armor pieces have that wonderful hammered metal finish, the reinforced borders harbor tiny nicks and dents from battle, and the shoulders are adorned with spikes, sculpted feathers and tiny skulls. 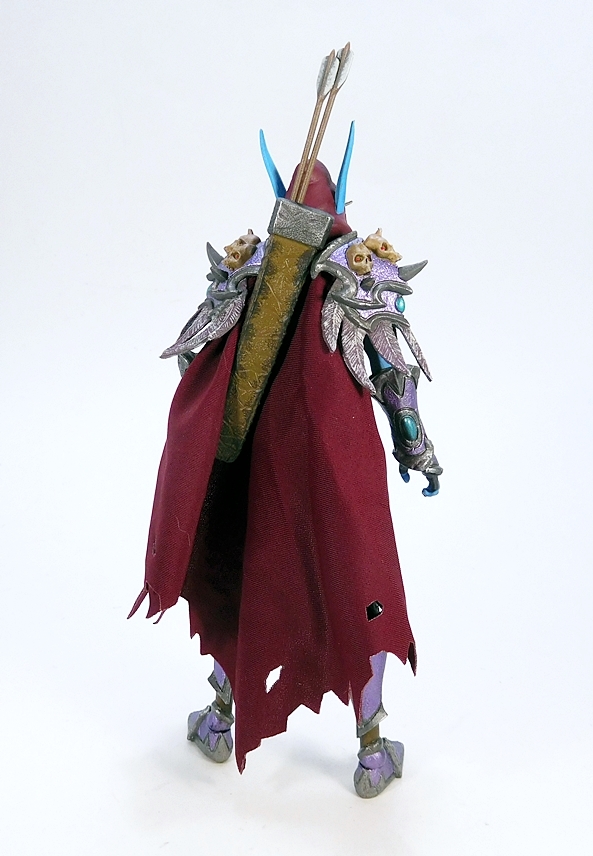 From the back, Sylvanas sports a purple fabric cape, which shows some considerable wear. She also has a quiver, which also has its share of nicks and scrapes from use. The quiver is designed to hold the loose arrows she comes with, but I’ve only been able to get two in there at a time. I’m not sure what’s going on down inside that thing, but the arrows are fragile and I don’t want to force them.

The paintwork on this figure is a real treat and is all about the contrasting of the drab brown and black of the trousers, boots, and straps with the beautiful metallic purple of the armor plates and the soft matte blue of Sylvanas’ skin. 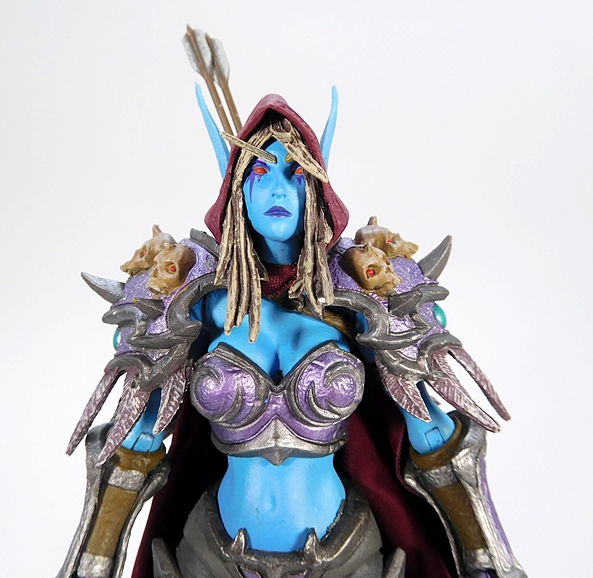 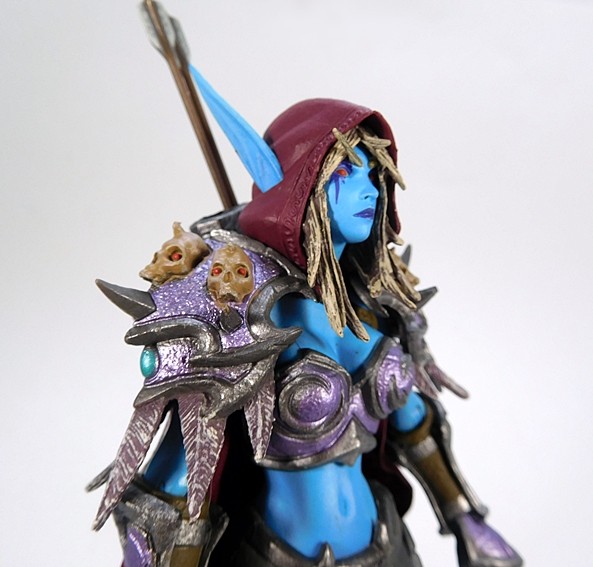 NECA did a bang up job on the portrait here. Sylvanas is wearing a sculpted hood with slits for her long and elegant ears to protrude through. Her wispy eyebrow extends out over her right eye, but her left eyebrow is concealed. Bits of her hair peek out from the hood to frame her face. Her eyes are beautifully painted, but they can be tough to see under normal conditions, because the hood casts a shadow over the top part of her beautiful face. 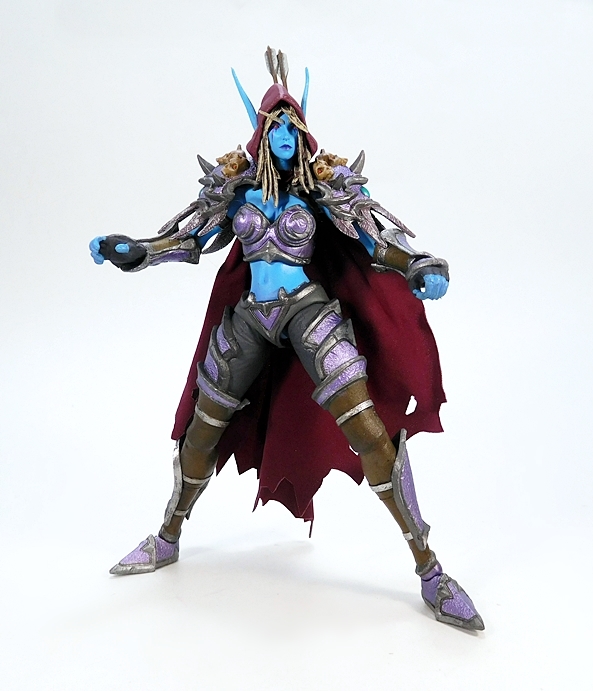 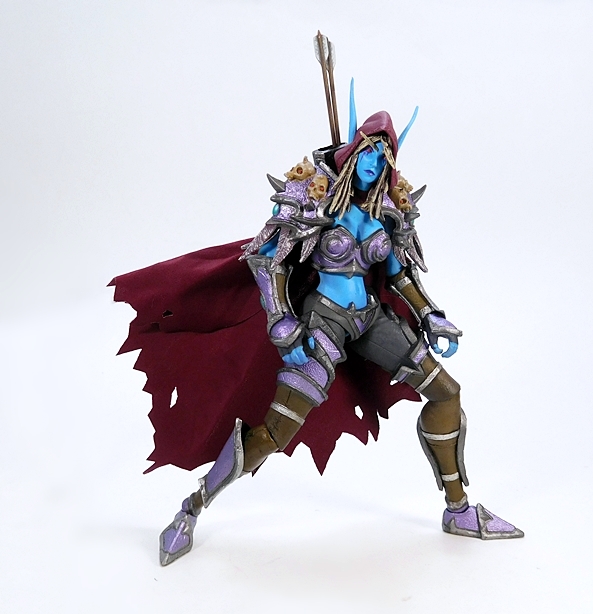 Sylvanas sports many conventional points of articulation, some of which are at odds with her sculpting and character design. Y’all know how much NECA loves their rotating hinges, and this figure has them in the shoulders, elbows, wrists, hips, knees, and ankles. She also has a ball joint under her chest and in her neck. The shoulder armor pieces are flexible, so you can manipulate them to allow her shoulders to move a bit more than you might expect, but maybe not as much as you might like. She also has swivels in her biceps, and mine look like they’ve been pulled a bit, as there’s a noticeable gap. It’s tough to see, since they’re buried under the shoulder armor, but I worry a bit that they may get floppy over time. 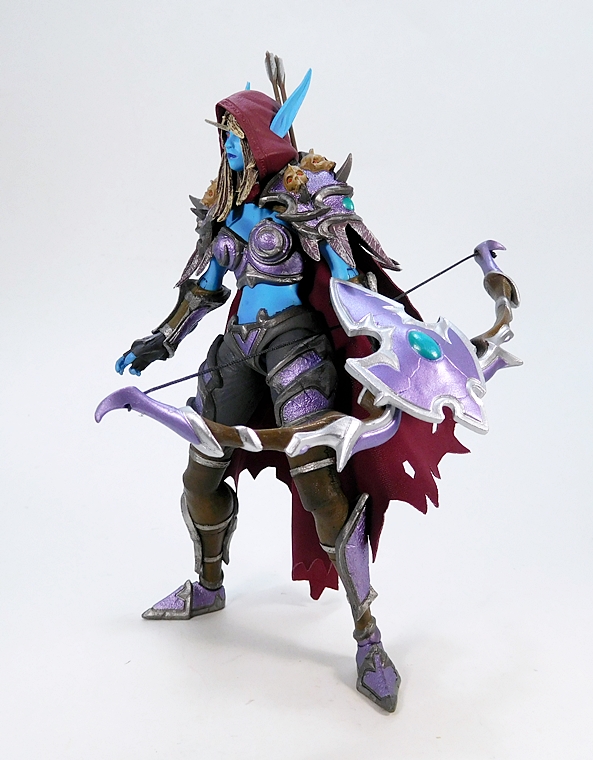 As for accessories, Sylvanas comes with her bow, Deathwhisper, which is a damn beautiful sculpt. It includes a lovely organic shape, as well as a shield attached to the center. The underlying bow is brown with bulked out pieces painted in silver and metallic purple to match Sylvanas’ armor. It also includes a real string. It’s a little tough to get her to hold it. I actually had to razor apart her fingers, so that I could wrap her hand around the grip, but once it’s in hand it stays put. Also included are her three loose arrows, which I mentioned earlier. 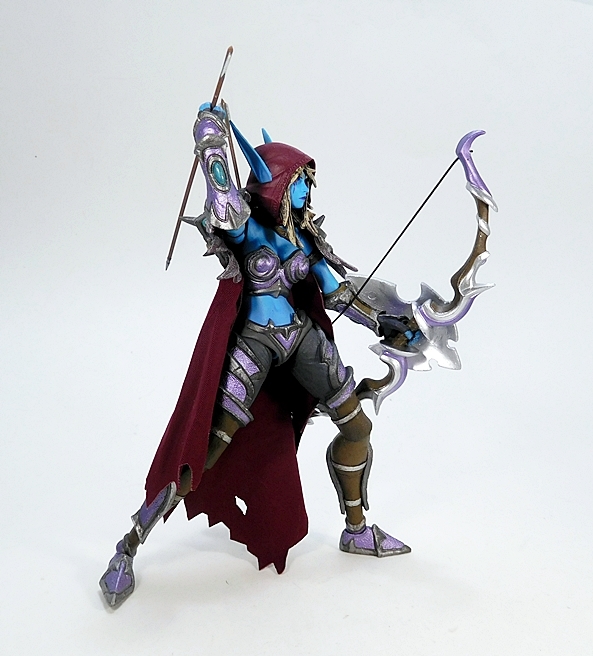 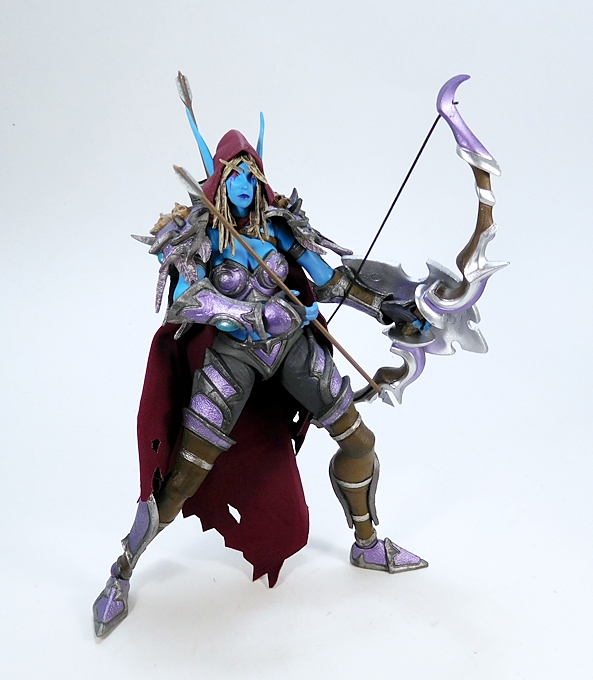 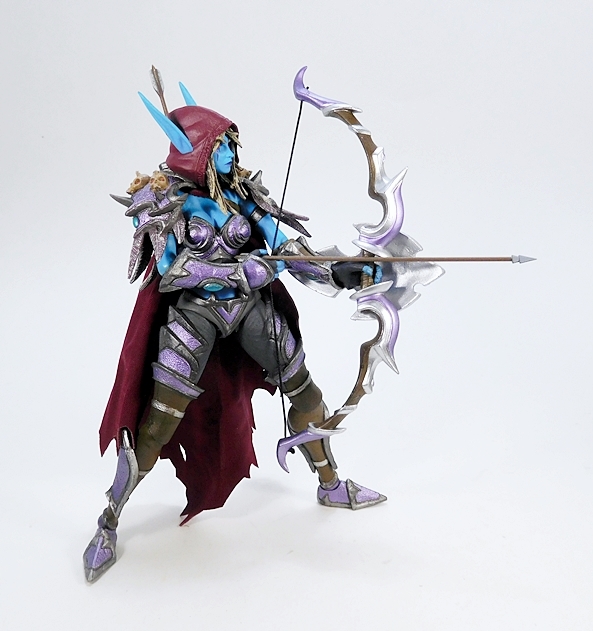 The articulation allows for her to knock an arrow and get ready to fire, but she can’t really pull back on the string very far. I actually think this may not be so much a restriction of the articulation, but more because the bow is strung tight, and there isn’t much elasticity to allow it to be pulled back. Now, with that having been said, I was still able to get some nice poses of her leading up to taking a shot. 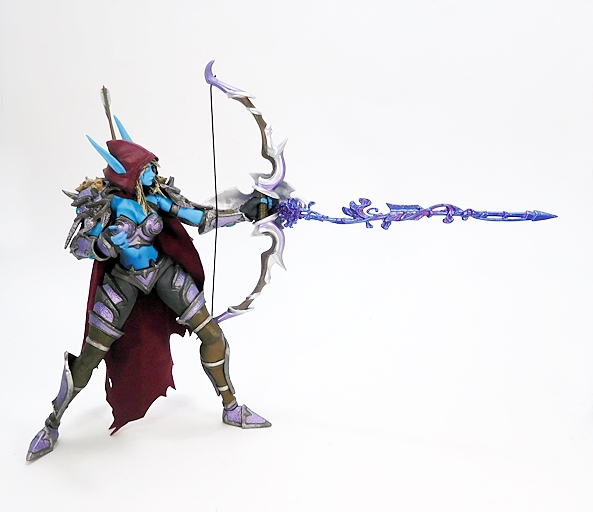 Sylvanas also comes with an effect part for one of her skills, Wailing Arrow. This is a great looking piece, but I was totally stumped as to how it’s intended to be used. I was ultimately able to wedge it in between the shield and her grip to make it look like it’s being fired, but I tend to think it was just included as a bonus and not to be used with the bow in any specific way. I’d say this was a pretty big oversight, but at least I was able to get it to work. 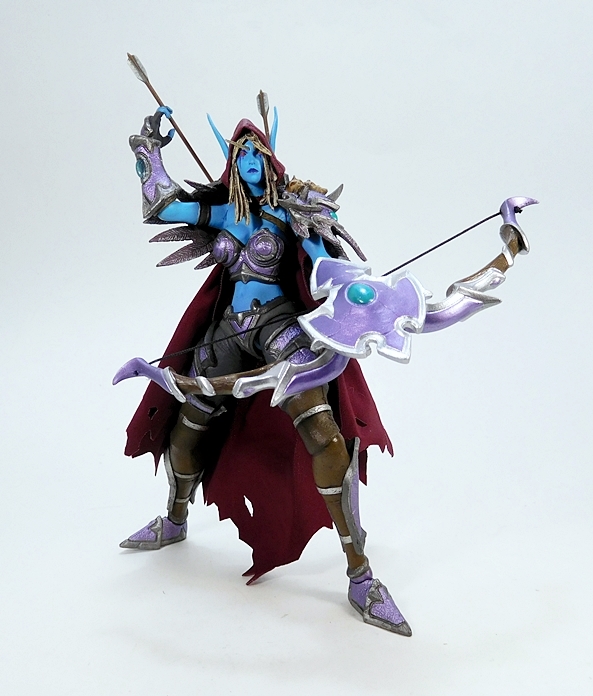 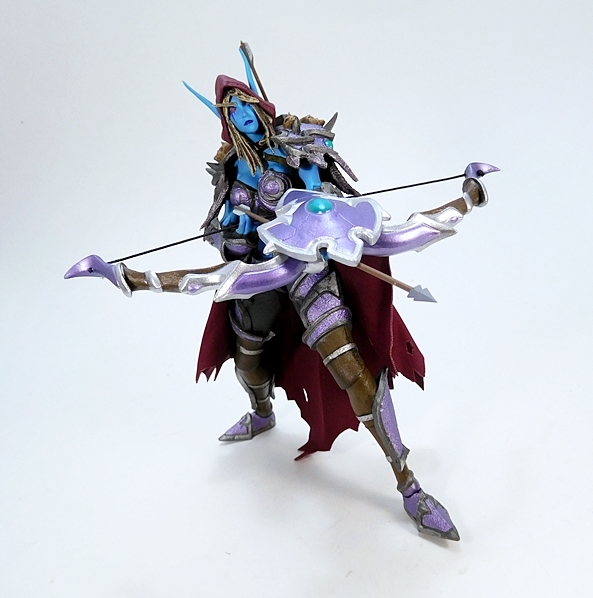 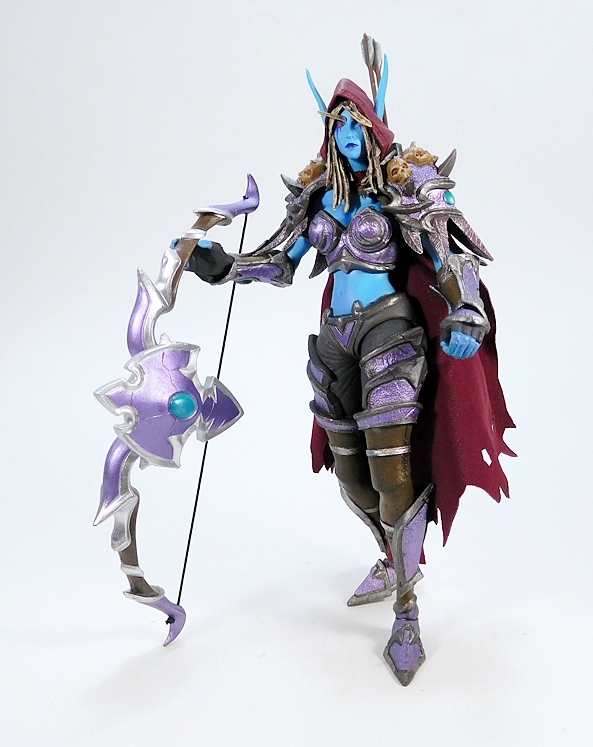 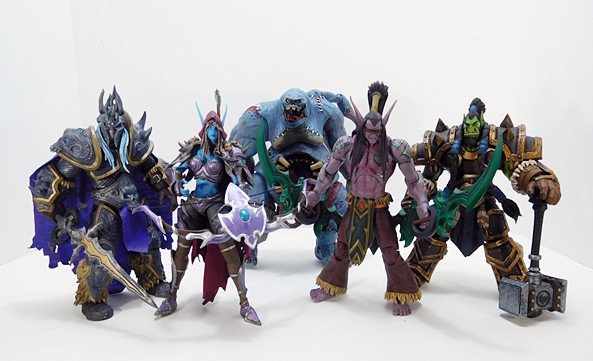 And so, it is with a heavy heart that I end this review, knowing that there will be no more Warcraft figures from NECA. Boo! It’s especially painful because Sylvanas really is a great little figure and I wanted to see so much more out of this line. Which begs the question, where did the license go? Well, I know Blizzard struck a deal with Max Factory to produce Overwatch Figmas, but I don’t know why that would necessarily preclude NECA from continuing with this line. But, them’s the breaks and I really have to learn to be thankful for what I have, rather than what else could have been. Besides, I still have one more figure (from the Starcraft franchise) in this line to check out, and I’ll swing back to him in a couple of weeks.

2 comments on “Heroes of the Storm: Sylvanas (Warcraft) by NECA”