Last weekend was Force Friday II, an event where retailers launch the new toys for the upcoming Episode 8: The Last Jedi, and my job requires that I partake, as a planner, coordinator, and executor. But as a buyer I was trying to sit most of this one out. I ordered the 6-inch Black Series figures that I wanted online, and I planned on abstaining from the 3 3/4-inch offerings completely. And after publicly boasting about my awesome willpower, I folded exactly one day later and bought four of these little buggers. Also, because I have even less willpower, I wound up opening them in the car while I was waiting for my order of Chinese Food to be ready, so I don’t even have any packaged shots. Jeez, I’m a real pathetic specimen. But that’s OK, let’s just borrow the official Hasbro pictures to have a look at the packaging…

The presentation here is white, clean, and snappy! The Star Wars logo is in red and you get a red swipe with the character’s name along with some great character art striping the card to the right of the bubble. The bubble shows off the figure and accessories quite nicely, and there’s an insert that calls out the Force Link gimmick, which uses a chip to identify the figure and play sound clips out of a glove-like accessory (sold separately!). Unfortunately, the back of the cards are a f’ugly multi-lingual soup with a mix of warnings and copyright information. I really miss the days of “Collect Them All.” Anyway, I dig what Hasbro has done here. The packages are fresh and original, and it’s a shame I already tore them to shreds. On a side note, just about every one of these cards came out of the cases all bent to hell. I’m not sure if that’s the norm, but it’s certainly enough to vex the MOSC collectors. Let’s start with Poe Dameron… 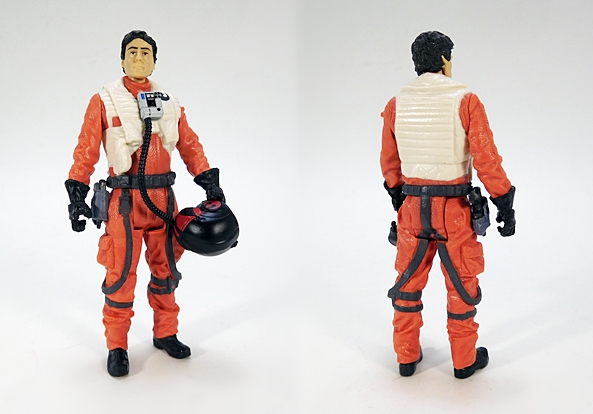 I wanted to start with Poe, because he’s the main reason I bought these. When I saw him on the peg and realized he was so much better than the garbage Happy Meal toy of a figure that we got for The Force Awakens, I decided to buy him to replace the old one. That quickly descended into, well, if I’m buying one I might as well buy a few more. So, this is essentially an apology do-over figure of Poe in his X-Wing Pilot outfit and from the neck down, it’s actually the exact same sculpt that we got last time. And that’s fine, because my issue with the previous figure was from the neck up. 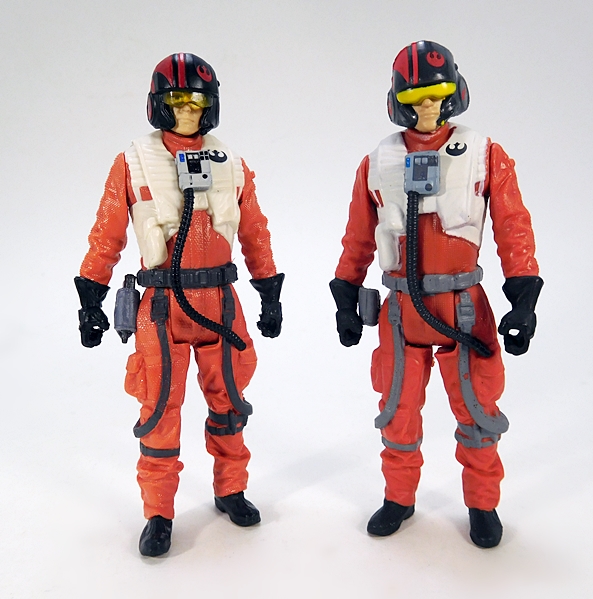 Here’s a quick shot of them standing side by side and it’s easy to see what a monumental difference the better noggin makes, but I’ll come back to that in a bit. While the mold is clearly the same, the texturing on the flight suit looks a lot more pronounced on the new figure. Otherwise, there are just some minor variations in the coloring and the paint lines on the new figure are a lot cleaner. You still get the functional holster on the right hip and the teeny tiny blaster pistol, which he can hold in either hand.

And gone is the cartoonish blob of a head with the sculpted helmet and ugly painted yellow visor. In its place we get this fully sculpted head, which is not a bad likeness of Oscar Isaacs for this scale and price point. The facial features are really well defined and the paint is sharp and clean. The helmet is a little work of art by itself and includes a translucent yellow visor and crisply painted markings and insignia. What’s more the helmet fits perfectly and doesn’t look oversized at all. Jeepers, Hasbro, how did you manage to make a sculpted-on helmet look bigger than the one that comes off? That flies against all logic!

Poe features the standard five points of articulation, which includes a standard t-crotch, rotation in the shoulders, and a ball jointed neck. He also includes two additional points of rotation in his gauntlets. This is a great little figure and having it in hand just begs the question, why couldn’t Hasbro do this last time? Either way, I’m re-purposing the old Poe as a standard X-Wing Pilot, so he won’t go to waste. And hopefully I won’t lose the gun this time! Let’s move on to Paige Tico…

Paige and her sister Rose represent that magical time before a Star Wars film is released when you have action figures of characters that you know very little about. Case in point: When I was a kid, I proffered that Squid Head was a heroic Rebel spy integral to victory over the empire! Aaaaand then I saw Return of the Jedi and realized I may have overstepped a bit. We do know that Paige is a “Resistance Gunner” and seeing as she’s wearing a flight suit, I can surmise she’ll be manning a turret on some kind of fighter. I really dig the look of her flight suit, it’s similar to Poe’s, but has even more of a WWII flavor to me. You get lots of lovely little details like the rumples in the legs and the belts and buckles on the back of the ribbed vest. The paint is a little rough on the chest apparatus, but intentional or not, I think that gives it a nice weathered look.

As with Poe, Paige features a fully sculpted head with a wearable helmet. I’ve only seen a few stills of the actress, but I think the likeness is decent enough for the scale. The flight hood looks especially good, almost like you could take it off. The helmet features a translucent yellow visor and fits the figure perfectly. The markings on this one are fantastic, including a checkered pattern, blue stripe, and some insignia on the side. 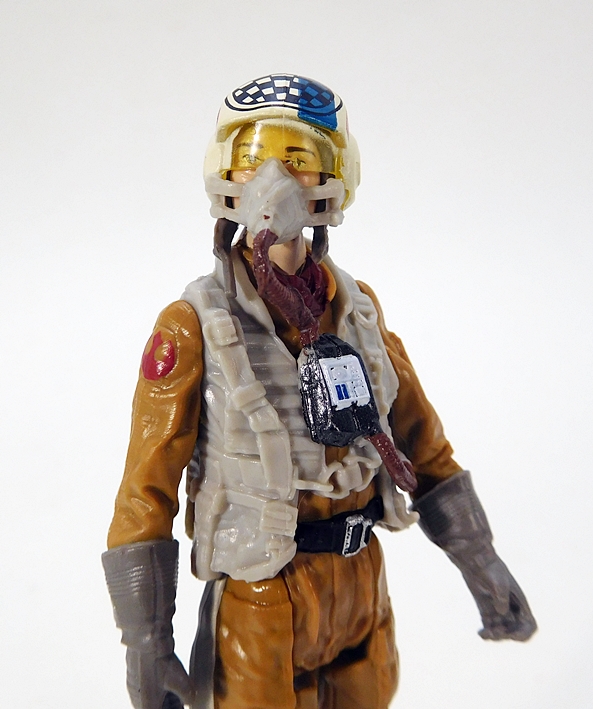 Paige gets one more extra and that’s the breathing mask that hangs off her chest apparatus. This piece has pegs that fit into the sides of the helmet and it works surprisingly well for a figure in this smaller scale.  If and when Paige gets a 6-inch Black Series figure, I’m interested to see if they can really improve all that much on this one, beyond the articulation of course.

Paige has the same articulation as Poe, minus the gauntlet swivels. She also comes with a blaster pistol, which she can hold in either hand. The only downside is that she has no holster to store it in. How the hell am I not going to lose that? I might as well just give it to my cat right now. Moving on to Paige’s sister… 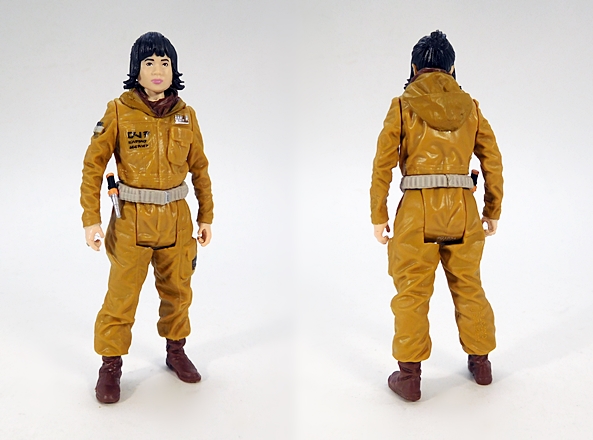 Rose Tico is another mystery character. Other than being Paige’s sibling we’re told that she is a Resistance Technician, I’m assuming means mechanic and I think has a lot of potential for a really cool character. With that having been said, Rose is not one of the more exciting figures in this wave, as she’s basically just wearing overalls. That’s not to say she isn’t a great looking figure. As with Poe and Paige, there’s a ton of great detail in this sculpt, from rumples and wrinkles to the sculpted pockets and the hood. She also has some sharp printing on the right of her chest and her sleeve.

The head sculpt seems like a fair likeness to what I’ve seen of the actress. They definitely got her hair looking close. Again, the printed Aurebesh lettering on her chest is a great touch.

Standard 5-POA applies, making Rose’s articulation identical to that of her sister. She comes with what I think is supposed to be some kind of spanner or diagnostic probe. It pegs into her belt and can be held in either hand. She also includes a rather large blaster rifle, so I’m assuming we’re going to get to see her do some fighting when Episode 8 hits. And that brings me to the last figure of the day, the First Order Stormtrooper.

I was expecting a repack of the exact same figure that was released in The Force Awakens line, but this Stormy appears to be all new. The biggest differences include a wider stance to the legs and a glossy sheen to the armor, where TFA version was more matte.

Here they are side by side, with the new release on the left. Overall, I’d say I prefer this one, although the new leg stance can make him a bit more difficult to stand, especially if you don’t have his feet planted in that one intended sweet spot. I’d also say that the details are a little sharper on the new one and the paint is a little cleaner.

The new version includes both the blaster rifle and pistol that came with the previous release and you can still peg either one into his leg.

The Last Jedi figures are retailing for $7.99 a pop in most places, and I think that’s a pretty good price for what you’re getting. In the past, Hasbro has touted these 5-POA figures as having the best possible sculpts, but this is the first wave in a while where I believe that’s true. Plus, I thought the days of decent action figures under $10 were a thing of the past, but even with the 5-POA standard, I really enjoy these a lot. I haven’t even touched on the gimmick that makes them talk, but I don’t think I’d pick up one of those gadgets unless they were discounted down to almost nothing. Oh, and yes, this means I’m back on the 3 3/4-inch Star Wars bandwagon and I’ll be checking out some more of these soon.