Howdy, folks! It’s Transformers Thursday again and as promised I’m here to check out the second of the new Titans Returns Voyager Class Triple Changers! A couple weeks back, I looked at Octone and the feeling was overall one of Meh. I felt he had a really solid robot mode, but I was split on his two alt modes. Here’s hoping that Blitzwing can break the trend, because he’s one of my favorite Triple Changers and I really need a solid version of this guy represented on my shelves. Let’s have a look!

And here’s the packages shot. It’s worth noting that this is the second time we got a Voyager Class Blitzwing in the last four years. The Generations one came close to getting the job done, but ultimately stumbled so badly on the little things (like functional shoulder tabs) that it incurred all my rage. I’m hoping against hope that this one sets things right. I’m going to start with his robot mode.

Well, alright! This is a Blitzwing I can get behind and is overall a solid recreation/compromise of the G1 toy and Sunbow cartoon design. The torso sells it to me the most, which was one of the issues I had with the Generations figure and the exposed cockpit on the chest. This is just a slab of purple, boxy goodness. There’s plenty of sculpted detail, especially in the pelvis, while the upper chest features the faked-out partial nosecone with yellow segmented sections on the sides, flanked by red panels and triangles. The lower legs are pretty free of kibble, just the jet tail fins folded neatly on the sides, although feel free to fold them down to face the front and mimic the G1 toy’s look a little more closely. The arms are pretty complex as the tank treads are folded up into them. They’re not as streamlined as I might have preferred, but they’re not really anything I’m going to complain about either.

The back ain’t too shabby. He features the tank cupola on his back. You can leave the cannon barrel in place to simulate the G1 look, but I think it extends a little too far up, so I opt to remove it. The official transformation suggests his wings should be folded up, but I prefer to leave them out, which mimics the look of the original a little better to me. Little heel spurs help keep him standing up.

The Titan Master Hazard forms Blitzwing’s head and I really love the sculpt here. I would have been OK if they went for for a silver face to match the Sunbow look, but I’m also fine with the purple toy-inspired face. My only complaint on the head is that the yellow paint around the “helmet” is a little splotchy on mine. I can’t remember the last time I had a gripe with the paint on a Transformers figure. Oh, and have a look at that Decepticon sticker on his chest. It’s already starting to peel at the edges. That makes me sad. 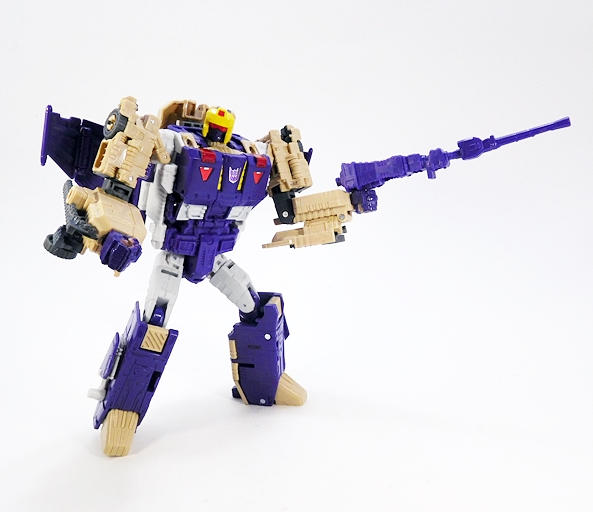 Blitzwing comes with a standard gun for a Titan Master to sit in, but in this case it can be combined with the tank cannon to form a long rifle. It looks like a suitable weapon to use for his “Long Bomb” strategy! 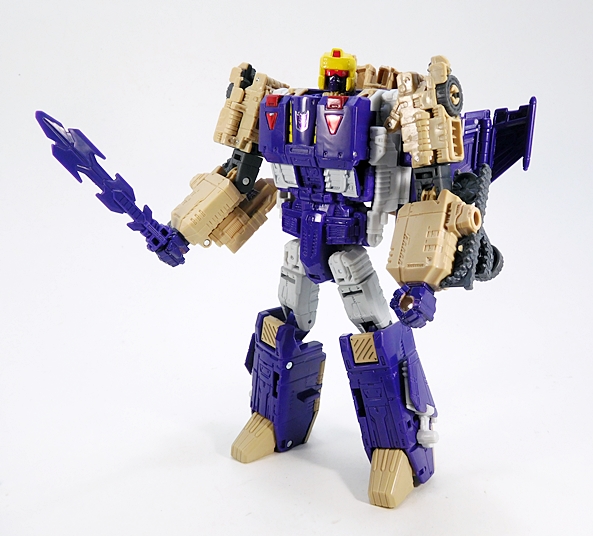 And he also comes with his rather unique looking sword. I like the design, but it feels a little on the small side, but not bad. So, all in all, I think Blitzwing is a pretty fantastic robot, but then I could say the same thing about all the other Titans Return Triple Changers. The real proof is in the alt modes. Let’s have a look at Blitzwing’s jet mode… 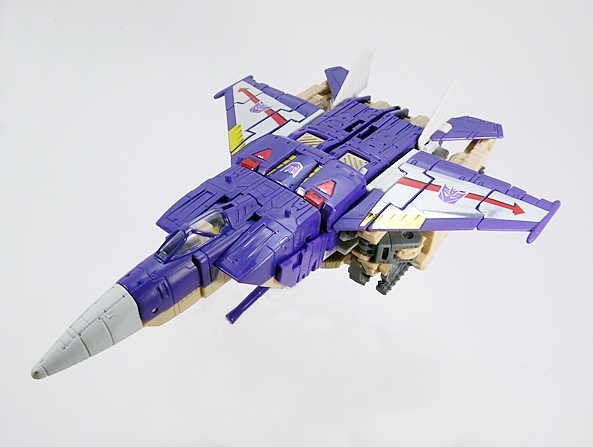 The transformation from robot to jet mode isn’t too bad and I’m really digging the results. From the top he’s appropriately purple with most of his tan bits relegated to the undercarriage. As with the robot mode, you get some really nice sculpted detail, including panel lines, flaps, and all that jet jazz. And then you’ve got the foil stickers on the wings. So, in a perfect world, these look amazing. The foil is reminiscent of the old toy, the red arrows have been streamlined a bit, but they’re still there as are the Decepticon emblems, proudly displayed on each wing. Practically, however, these stickers are problematic. I had to smooth mine out straight out of the box to get the air bubbles and folds out of them. They look great now, but I don’t expect them to last the test of time, especially when they’re positioned so closely to hinged plates. This was an issue with Octone and Broadside, and here we go again. I realize it’s to help re-purpose the molds, but they worry me. OK, enough about the stickers…

Let’s talk kibble! If you expect a Transformers jet to not be packing some major kibble on its undercarriage, well you haven’t been in this convertorobot game for long, have you, son? In this case, I think Blitzwing’s jet makes good use of it. Obviously, you have a giant upside down tank cupola, but it not only provides the molded landing gear to rest the jet on, but also a nice big under slung cannon. The robot arms are also tabbed away fairly well under the wings. I mean, sure I can tell there are tank treads there, but it’s nowhere near as bad as Octone’s, “Look at me! I’m a plane with two halves of a truck cab under my armpits!” Nope, from top to bottom, I am totally fine with this jet mode. 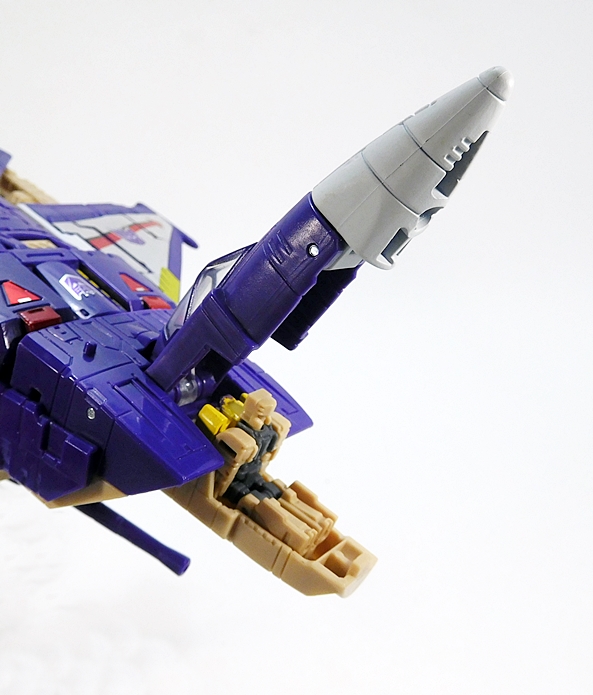 The jet also has a couple of options for Titan Masters. Despite the compact size of the canopy, you can indeed fit a Titan Master in there, although the method of getting him in there is a little unorthodox. You can also attach one of Blitzwing’s guns to the back of the jet to make a gunning seat for another Titan Master. So far, so good. You haven’t disappointed me yet. Shall we go for three out of three? Let’s have a look at that tank mode! 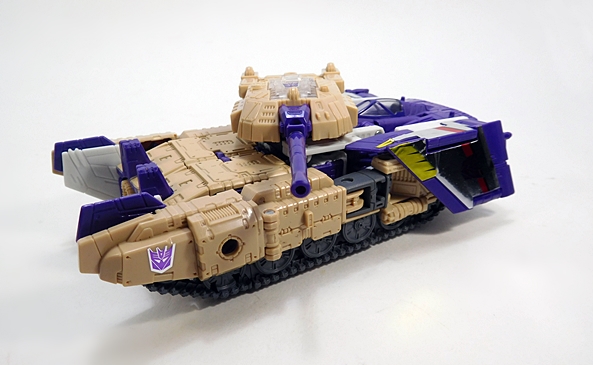 Ok, so obviously the jet was what I like to call the priority mode and this is what I’d call the compromise mode. There’s plenty to pick at here. The front of the tank is showing some major jet ass, the back side armor plates are obviously folded jet wings. The treads don’t lock into the body well at all, leaving gaps in the middle where they’re unsupported. I’ve found that slotting the folded wing tips into the sides makes them a bit more stable, even if they do angle out a little more. 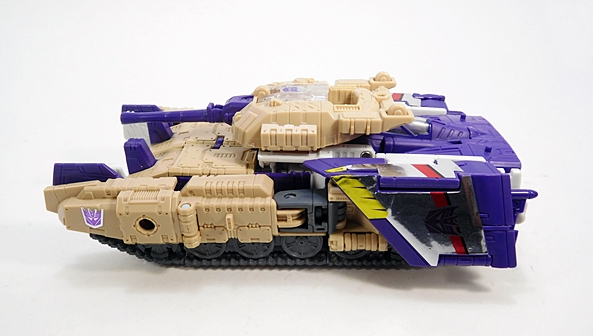 To make matters worse, almost every facet of this “tank” feels like its at odds with another. And therein lies my biggest issue. I’d actually be OK with the way this thing looks if it locked together into a decent toy, but sadly it does not. And I’ve got to call foul when the robot and jet modes on the box look like actual product images and the tank mode looks like a 3D computer model downplaying the tank’s flaws.

As for play value, the turret does at least turn and there’s a place for Hazard to sit at the top of the cupola, which even provides a clear shield for him so Autobots can’t snipe him while he’s riding his f’ugly tank. They can still laugh, though. It can’t shield him from that. And yet even with all that scorn heaped upon it, I’d still say this is a better compromise mode than either Broadside’s jet or Octone’s cargo plane. Is it better than Astrotrain’s train mode? Well, if we’re talking keeping in spirit with the G1 original, I’d say Yes. If we’re going strictly based on its merits as an alt mode, than definitely not. 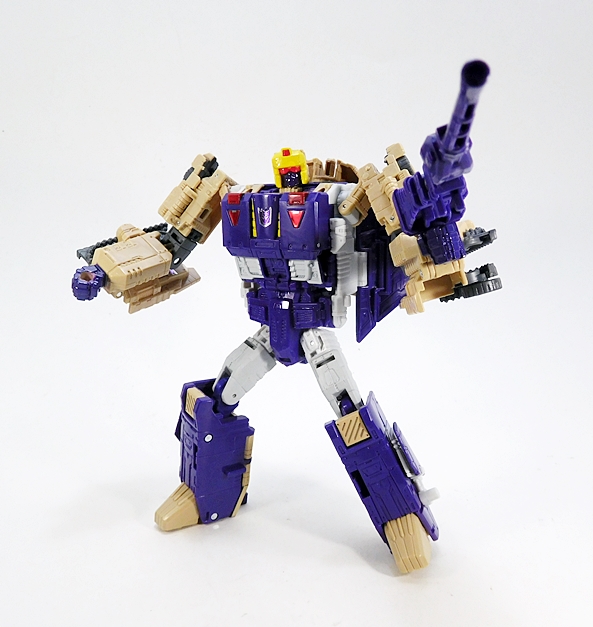 And so, the pattern I’m seeing with these Titans Return Triple Changers continues to hold true. We’ve had some great robot modes, each with one very solid alt mode, and one not so solid alt mode. And yet, I still dig Blitzwing a lot, even with his hideous and phoned in tank mode. In fact, I’ll just go ahead and say that I think he’s the most successful of all the Titans Return G1-based Triple Changers and a worthy replacement for the Generations one. Next week, I’ll be steering Transformers Thursday back to Voltron to check out the Legendary Red and Green Lions!

6 comments on “Transformers Titans Return: Hazard and Blitzwing by Hasbro”