You’ve probably already surmised something is up by the title of today’s feature, so let me just come out and declare that DC Fridays are going on hiatus. I’ve got some great DC related stuff pre-ordered and coming soon, but with DC Icons almost dead, and DC Multiverse too depressing for me to keep reviewing, my DC merch is pretty much relegated to statues these days. It breaks my heart because DC is absolutely killing it with their comics lately and I’m reading most of their current books. Sooo, I’m opening up Fridays as an “Anything Goes” slot once again, but as new DC stuff comes in, it’ll get shunted to the front of the line every Friday. Promise!

With that all having been said, I’m keeping things comic-themed today and checking out Diamond Select’s Exclusive Edition of the Femme Fatales Cassie Hack statue from Image Comics’ Hack/Slash! Phew, that was a mouthful! And yes, if by some chance this looks familiar, it may be because I reviewed the standard version a couple years back. If you’re down for some great horror-comedy-action funnybooks, you’d be well-served to check out Hack/Slash by Tim Seeley, which should still be available in TPB format. There’s hardly any merchandising surrounding this series, so it should come as no surprise that I was willing to double dip on the Exclusive. 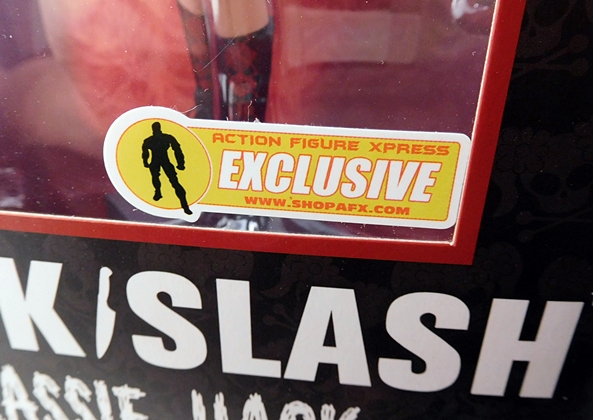 The packaging is more or less identical, even to the point where the photos on the back of the box are of the retail release and not this Exclusive. You do get a sticker on the front window declaring this an “Action Figure Xpress Exclusive”. There’s also a piece of foil tape on the top denoting it is a NYCC Exclusive and that mine is number 669 of 1,000. Dammit… soooo close to 666! Anyway, it looks like I’m going in from the bottom to get Cassie out! There isn’t a lot of set up involved here. After freeing her from betwixt two clear plastic trays one finds that she comes permanently attached to her base, but you do have to put her accessories in her hands. 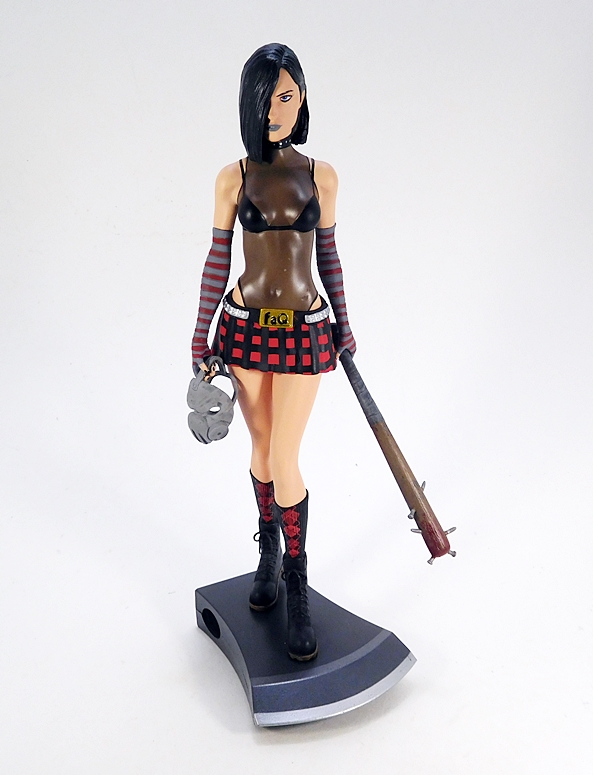 Here she is, and ain’t she to die for? In my review of the original retail release, I bemoaned the fact that this Exclusive was the more colorful edition and that I preferred it to the two. That opinion still holds strong today. Indeed, if I had known how easy and affordable this statue would be to eventually get, I would have waited, but more on that later. There is no new sculpting here, so we’re dealing with just a straight repaint, and even those changed areas are somewhat limited. The blue and gray gloves have been changed to red and gray, her gray skirt is now black with red squares, and her socks are now black with red decorations. 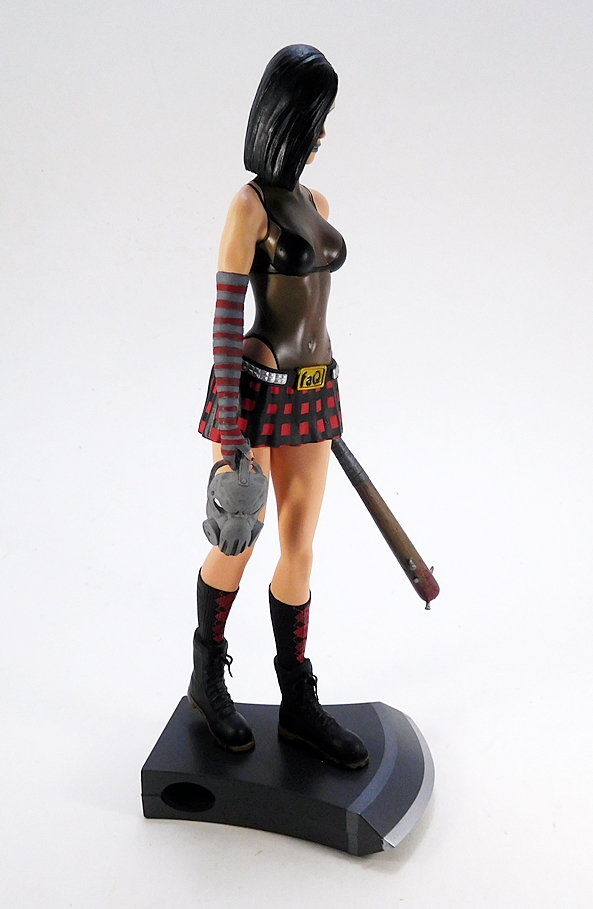 So, the repaint is not entirely extensive, but I think it does a lot to elevate the original release. I’m not saying they should have put Cassie in some inappropriately bright colors, but the gray used for the skirt just seemed drab and boring for a statue. Overall, the quality of the paint application is pretty good here, especially for a budget line like this one. 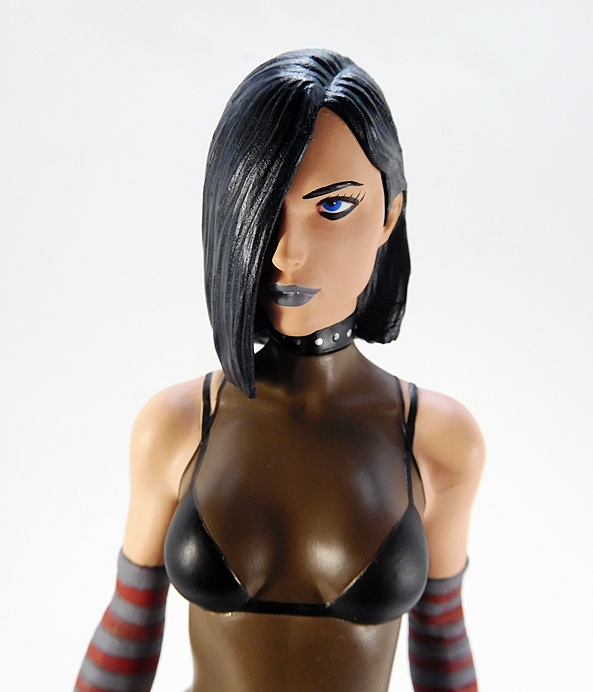 The portrait still looks great, and features Cassie’s hair cascading down and covering half of her face. She’s very pretty and I love the delicate curve of her nose into her more prominent upper lip. The paint for her eyes and lips is applied sharply, and yes… she’s wearing gray lipstick!

Her accessories include Vlad’s mask and her nail-studded baseball bat. It’s a shame they couldn’t do Vlad as a companion piece, but that really isn’t within the scope of this line, at least not back then. Nonetheless, as I’m sure I said when reviewing the retail release, it was crucial they make his presence felt somewhere and including the mask was a pretty good way to do it. I was hoping they would have added some writing to the bat for the Exclusive, like “Kiss It,” but both the bat and the mask are exactly the same as the original retail release. 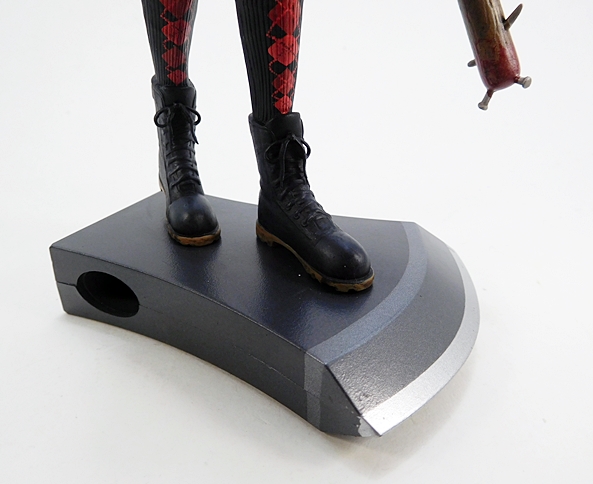 Also identical is the hatchet-inspired stand and I really do love this thing. It’s fun, creative, and perfectly fits the theme.

Generally speaking, these roughly 9-inch scale PVC statues retail for just under $45, which is not too shabby for statue collectors on a budget. There have been some ups and downs in terms of overall quality, but I’ve been a fan and supporter of DST’s Femme Fatales long before it grew into the DC and Marvel Gallery lines and Cassie here is a good example why. Now here’s the kicker: The limited run Exclusive is actually selling for about half the price of the regular retail release right now on Amazon, which is where I picked up mine. And so for a cool $15, I was able to get the preferred version that I thought would be difficult and expensive to find. Who knew? I’m sure as hell not going to complain about owning both versions. Especially since no other companies seem interested in doing anything with the license.