The sci-fi/action classic Predator turned thirty this year and NECA (who else?) was on the scene with an impressive wave of action figures to celebrate the film’s anniversary. Included in the assortment were no less than four versions of Major Alan “Dutch” Schaefer (five if you count the convention exclusive!). Sadly, I didn’t have the budget or space to go all in on this wave, seriously even I have to draw the line somewhere, but I did grab two of the four retail release Dutch figures when they went up for pre-order, and I’m finally getting around to open one of these today!

The packaging isn’t quite as snazzy as NECA’s Ultimate figures, but it’s still plenty nice. Dutch comes in a collector friendly window box that shows off the figure beautifully, has a great shot of him on the back, and features 30th Anniversary logos on the side panels as well as the figure’s name. In this case “Jungle Extraction” version depicts Dutch early in the film and at the beginning of the mission to rescue the “Cabinet Minister” from the guerrilla camp. The figure and gear are laid out on a clear plastic tray with a printed insert showing the jungle viewed through the Predator’s thermavision. 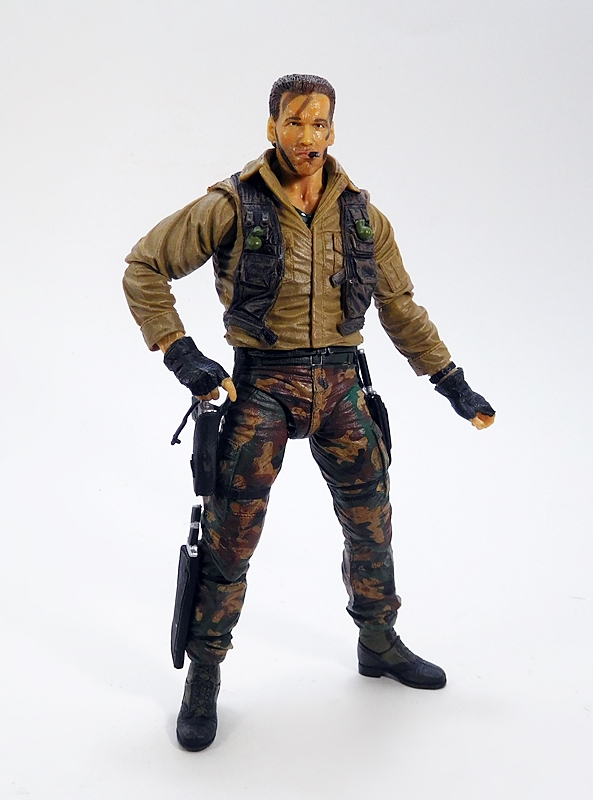 Aliens and Predators may be NECA’s bread and butter, but Arnold Schwarzenegger is their jam, and this figure shows it. Dutch comes sporting his full fatigues, which include camo pants, a long-sleeved, button-down shirt, and a tactical vest. The open vest on the collar is sculpted to look like the shirt is actually a separate piece and you can see a bit of his darker green t-shirt peaking out. As I would expect from NECA, every little pocket, rumple, and stitch is meticulously detailed on this outfit, from the edges on his collar and the grenades on his vest, down to the laces on his boots. 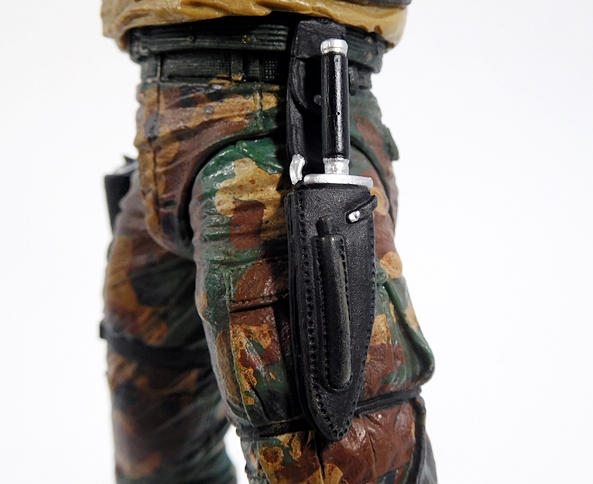 Dutch’s outfit includes a functional holster for his sidearm and sheath for his combat knife, as well as a scabbard for his machete. The holster has a retaining strap, as well as a sculpted pouch for an extra magazine. The knife sheath has a sculpted pouch for a sharpening rod. The detail on these is uncanny, right down to the stitching along the edges. 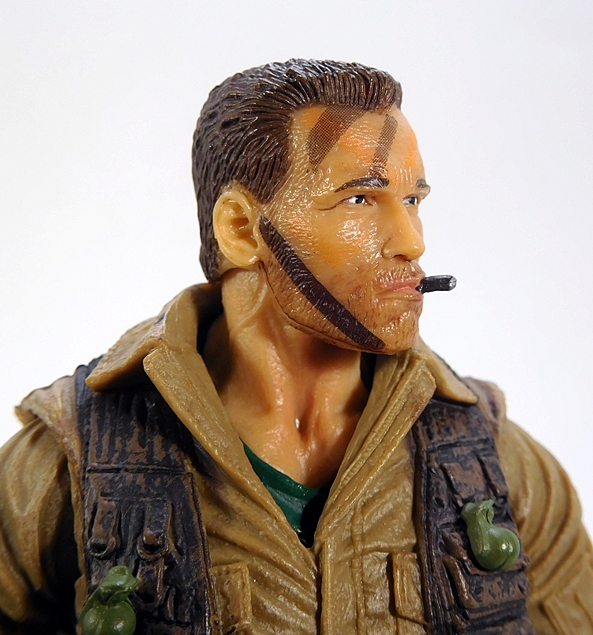 As for the portrait, well like I said earlier, NECA knows Arnold. They’ve sculpted him young and old, and everything in between and so naturally this is a great likeness. I’m not usually a big fan of this glossy, unpainted plastic for the head sculpts, but I don’t mind it so much here. It looks like he’s sweating his ass off, and that’s appropriate for the jungle setting. Otherwise, there’s plenty of detail in the facial features, as well as his stubble, and yes they even sculpted the cigar into his mouth. Lovely! The paint on the hairline is nice and clean and the camo striping on his face looks great. 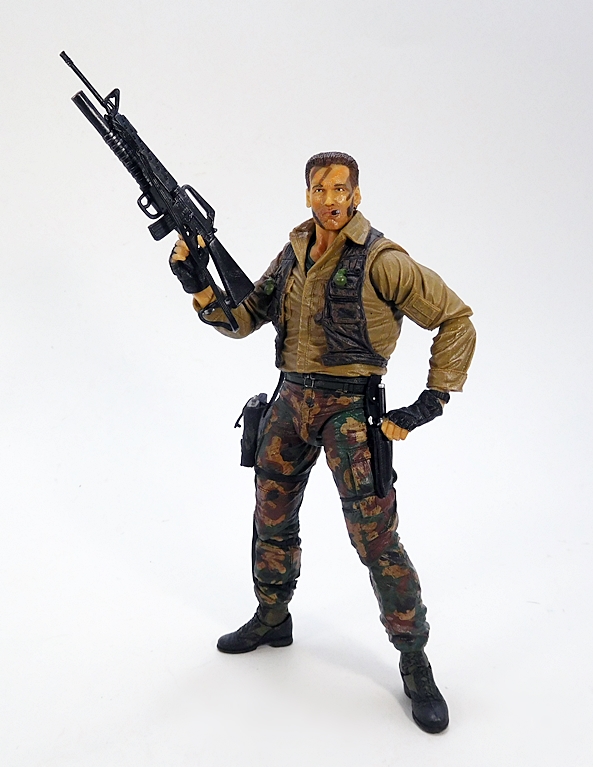 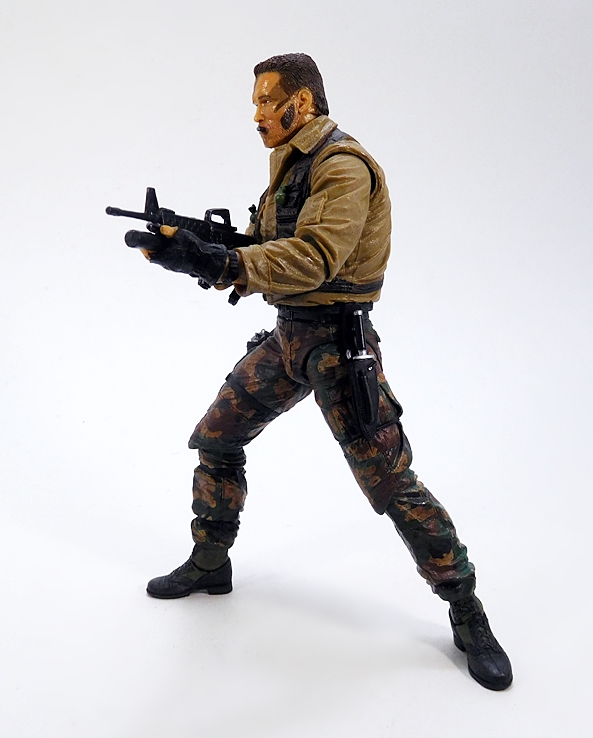 The articulation is the usual NECA fare with rotating hinges in the shoulders, elbows, wrists, hips, knees, and ankles. There’s a ball joint in the waist and another in the neck. I would have liked a little more range of motion in those elbows, but what we got is still plenty good.

As for weapons, let’s start small and work our way up. He comes with two knives, the smaller combat knife and the larger machete type. Both are beautifully sculpted with detailed hilts and silver painted blades. Neither of his hands are really designed to hold them, but I was actually surprised at how well they each looked in his gun hand with the trigger finger over the guard. Yes, they’re rather loose in his grip, but it works. 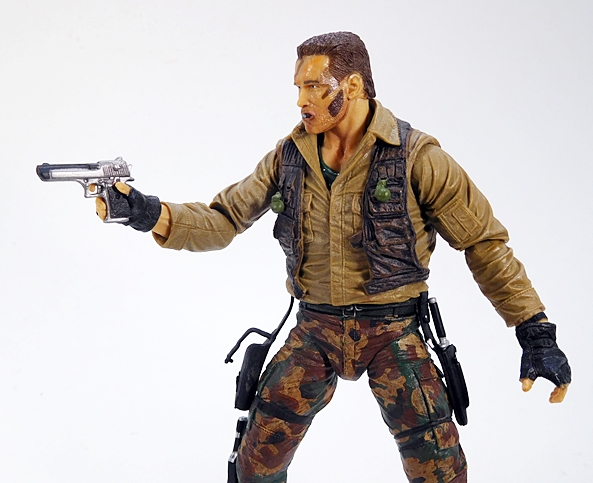 Next up, Dutch comes with his Desert Eagle. I just re-watched my Blu-Ray of Predator a few days ago and was surprised to find that Dutch never actually drew his sidearm at all in the film. He eventually loses it after he’s forced to take a swim. This is a pretty good sculpt, with both black and gray paint. 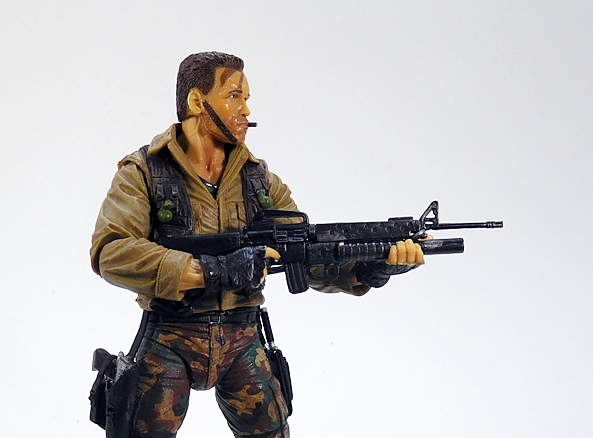 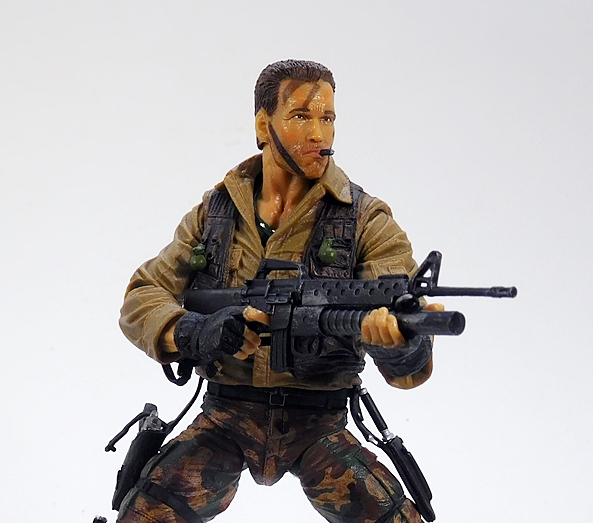 And last, but certainly not least is the AR-15 fitted with an M203 grenade launcher. Just like NECA knows their way around Arnold, they also know their way around weaponry and as a result this is a beautiful scaled recreation of the weapon carried by Dutch in the film. It has a bit of weathering to the finish and it includes a soft plastic carry strap so you can sling it over his shoulder. 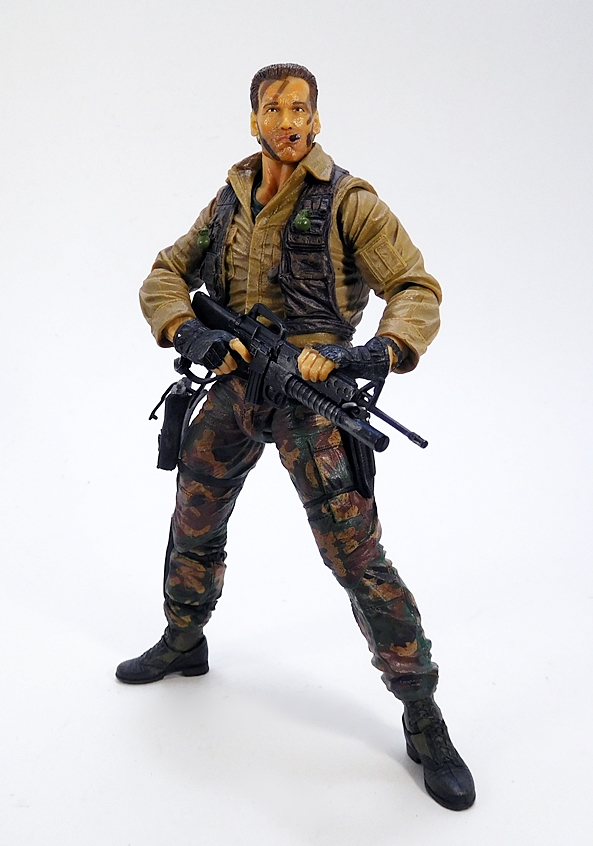 Dutch set me back about $25, which is a little more than usual for a regular NECA release, but a lot of retailers were really pushing to sell these as a complete assortment and goosing the price on the individuals just a tad. That’s OK. Considering all the craftsmanship and attention to detail that went into this figure, I’m perfectly happy with what I paid. You simply can’t go wrong picking up 80’s inspired action figures from the wizards at NECA and when the subject is Arnold Schwarzenegger, you know you’re going to be in for a treat. Indeed, I’m even starting to eye up the other two Dutch figures that I left on the table. But now I’m getting ahead of myself. In a week or so, I’ll double back and take a look at the Jungle Patrol Dutch!