I last visited with Diamond Select’s Muppets line back in May of last year when I reviewed the entire first wave. I liked what I got, but after that, I got cold feet and assumed a watch and wait posture toward this line. There were some delays and whispered rumors that the line might not be doing well, especially in light of the unending comparisons to the Palisades line. I was nervous about tossing more money at a second wave only to see it be the last. Yeah, I know, that’s backward logic. I should have supported it, but that didn’t go so well for me with the DC Icons line. Either way, we’re now several waves in, the line seems to be going strong and I’m paying for my procrastination by having to hunt down figures like Statler and Waldorf at scalper prices. Meanwhile, let’s check out another of my favorite Muppets and drummer for Electric Mayhem… Animal! 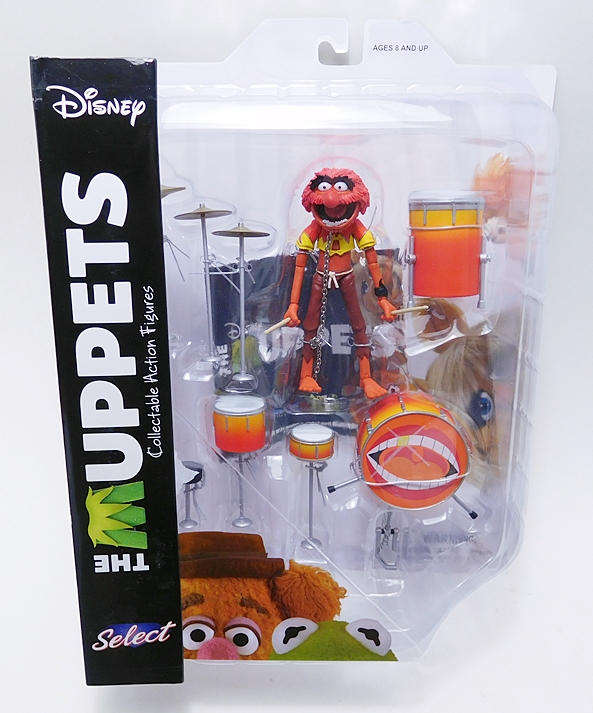 I’m still torn on the packaging for this line. In typical Diamond Select fashion, the package is absolutely huge and absolutely not collector friendly. It makes quite a statement in terms of presentation, it has some great character art on the side panel, and it shows off everything you’re getting in the package perfectly. On the other hand, it’s crazy to see how much trash it creates after you’ve opened it and how long it takes to take off all those twisty-ties.  And if you are a MOSC collector (or retail store, for that matter), these take up a lot of space on the shelf. But these figures have been so much fun, I couldn’t imagine not opening them, so let me get a fresh garbage bag and get Animal free of his plastic and cardboard prison. 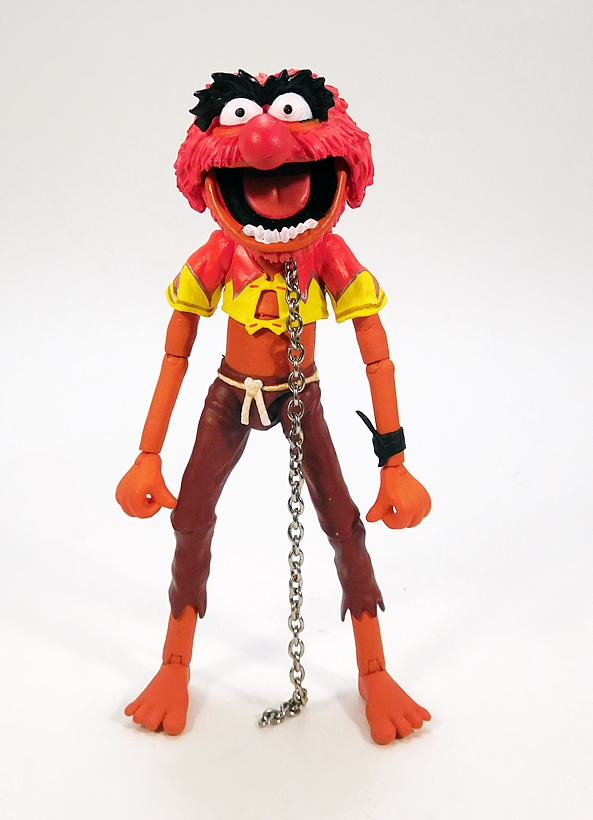 When it comes down to sculpt, DST seems to really know their way around The Muppets, and Animal here is no exception. All his crazy personality is beautifully captured here in plastic. His outfit consists of a hip and trendy red and yellow half-jacket with a pair of ragged cut pants tied at the waist. Call it Muppet Chic. The ensemble is topped off with his spiked collar and a real chain leash hanging down off it, long enough to touch the ground when he’s standing. The lanky proportions of the arms and legs are spot on, and it’s surprising how well he can stand on his own. 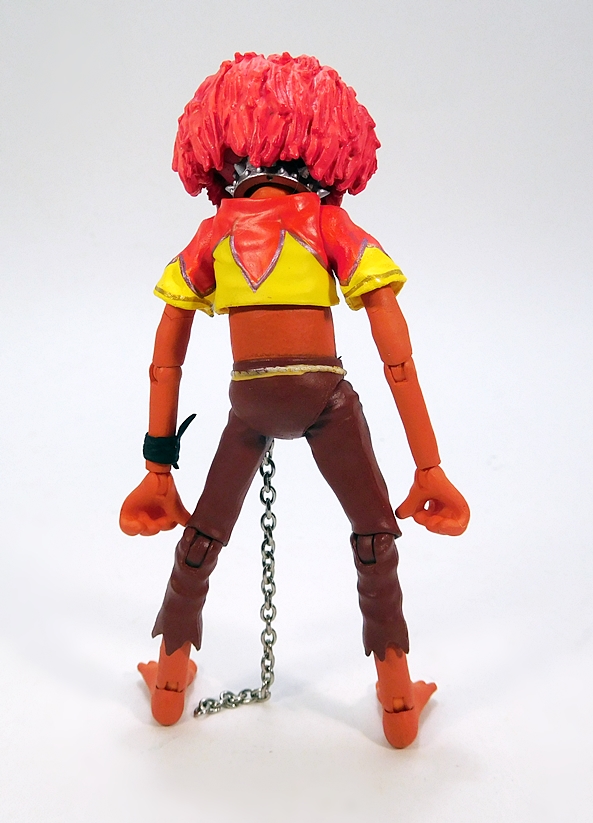 The coloring is really good and the quality of paint is fairly solid. His skin tone is just the right shade of orange, and while he doesn’t quite sport the same level of foam texture that the other company was able to achieve, it’s still impressive for this smaller scale. I really like the glossy finish used for his jacket that gives it a vinyl sheen. The paint application for his rope belt could have been a little cleaner, but I’m not going to make a fuss over it. 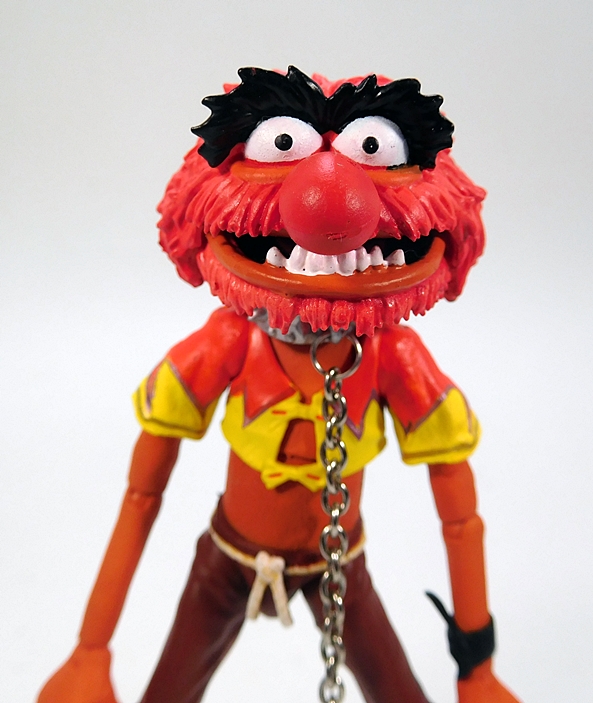 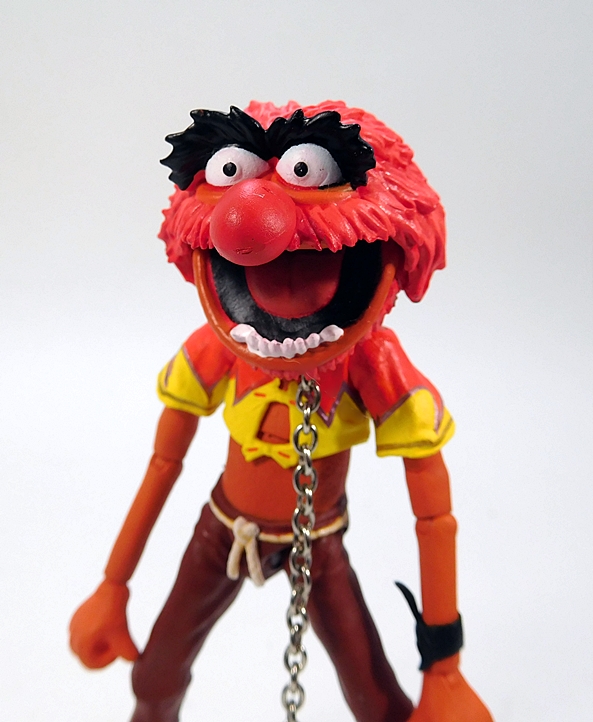 The head sculpt is definitely a winner. From the bushy eyebrows and crazy eyes to the sculpted fur that covers his face, this is undoubtedly the Animal that I know and love. The hinged jaw was a particularly nice treat, complete with painted tongue and adorable underbite. There’s a little slop of white paint around the teeth, but overall the paintwork on the portrait is respectable and clean. 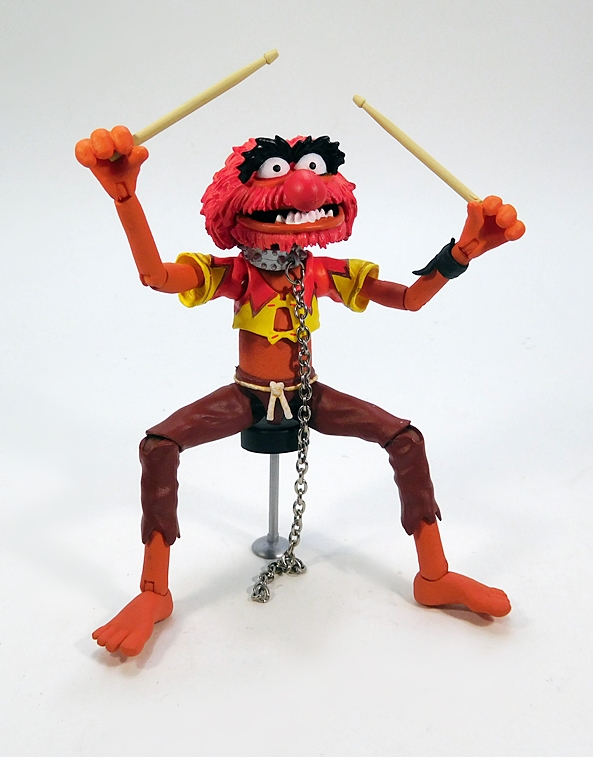 The articulation in this line has had its ups and downs, depending on the shape of the individual character. Ironically, the characters with the lankier arms and legs seem to do better and so Animal feels like he has more posing options than say Fozzie Bear. The points basically consist of a passel of rotating hinges. You get them in the shoulders, elbows, wrists, and knees. There are hinges in the ankles, and the hips and neck are ball jointed. A modicum of care is recommended when posing these figures, although Animal isn’t anywhere near as delicate feeling as Kermit. Animal’s hands feature holes in the grips designed expressly for holding his drumsticks. 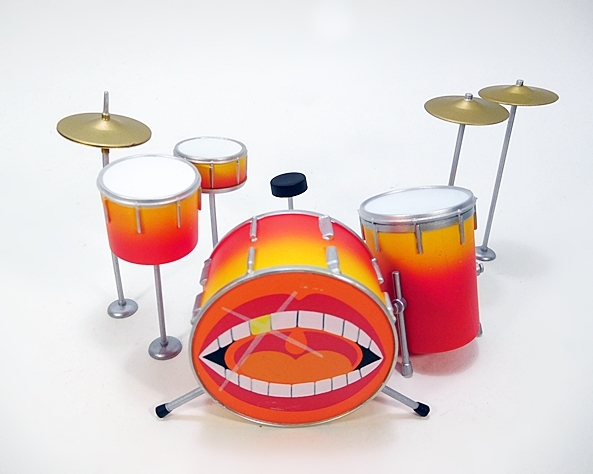 And that brings us to the drums! As great as Animal is, it’s the nine piece drum set that really makes this set shine. You get a bass drum, a tom tom, floor tom, snare, three cymbals, a bass pedal, and a drum throne for animal to sit on. The detail in the set is great, and I really dig the gradient yellow-orange-red deco on the drums. The bass drum also features the artwork for Dr. Teeth’s Electric Mayhem. There have been quite a few different pieces of art to grace Animal’s bass throughout the years, but I think this one was a fine choice for the set. I imagine it would be pretty easy to print off the other Electric Mayhem logos so you could swap them out on your display. 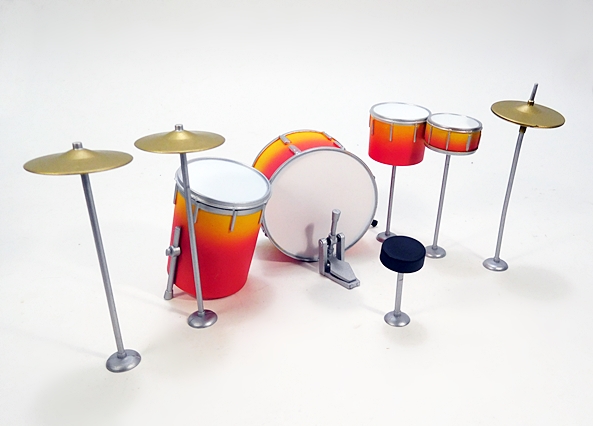 The only downside of the drum set is that the posts are rather frail and some of the pieces easily topple over. It would have been nice if DST could have used metal for the bases to help them stand, but we’re already getting quite a lot of stuff in this package, so I can understand why that might be cost prohibitive. Eventually, I’m going to just cut a piece of poster board and use blue tack to secure the pieces down. 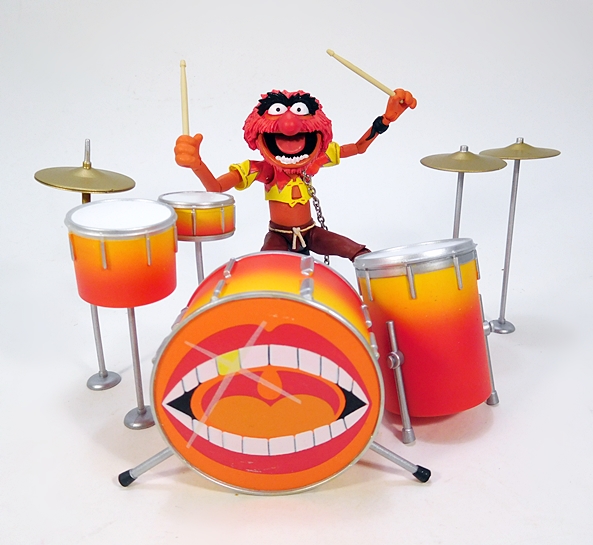 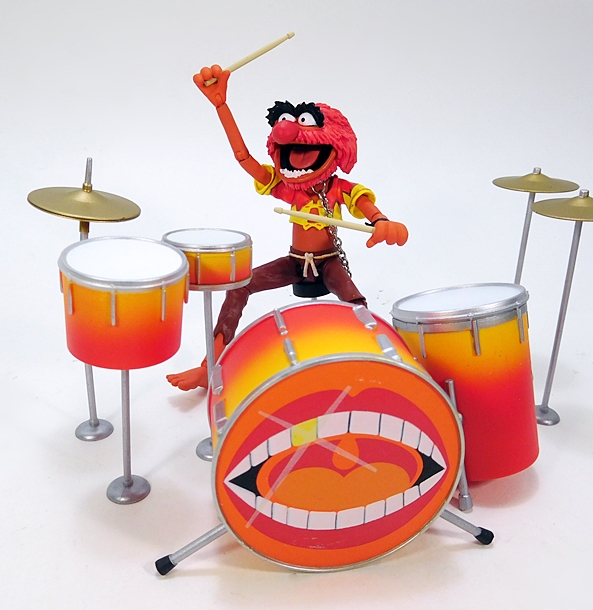 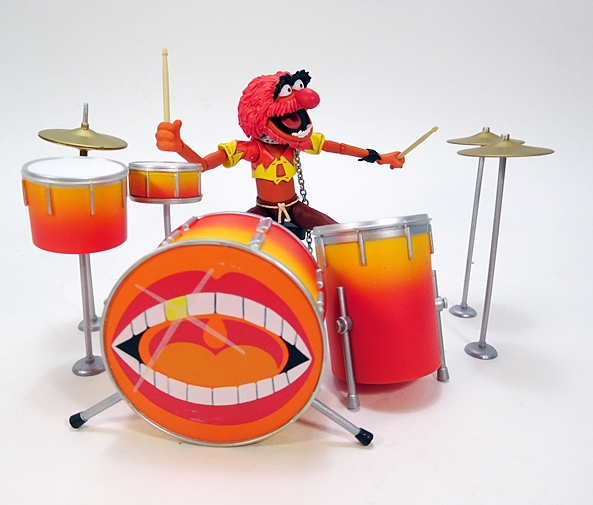 I really dig the importance that DST is placing in the accessories and set pieces for their Muppets line, and I think Animal and his drum ensemble is a great example of this line at its best. There probably aren’t going to be a lot of times where I call out DST over Palisades when it comes to The Muppets, but honestly DST’s drum set outshines what was included with Palisade’s version even if it is done at a smaller scale. 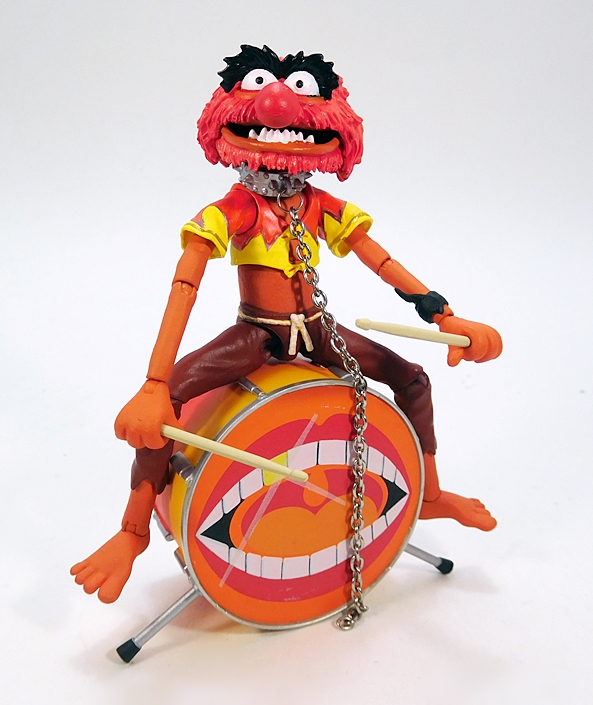 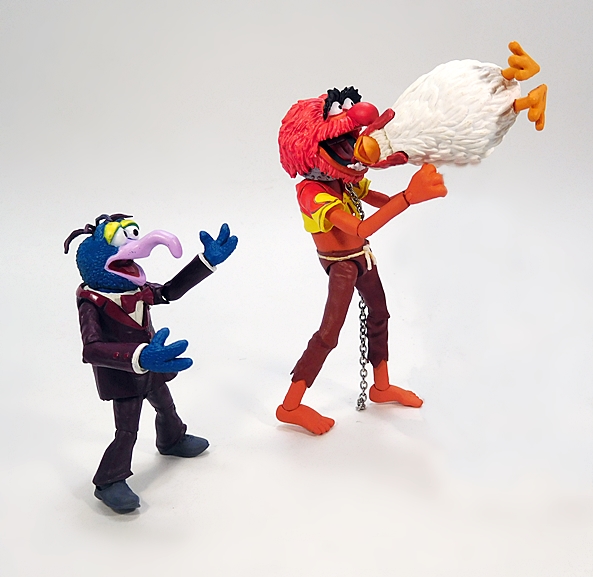 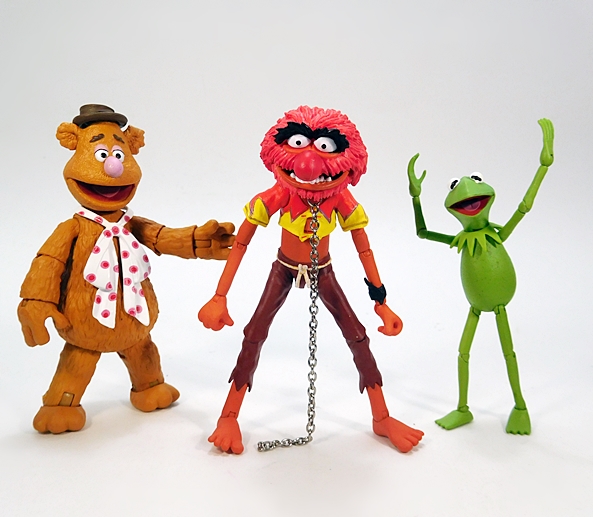 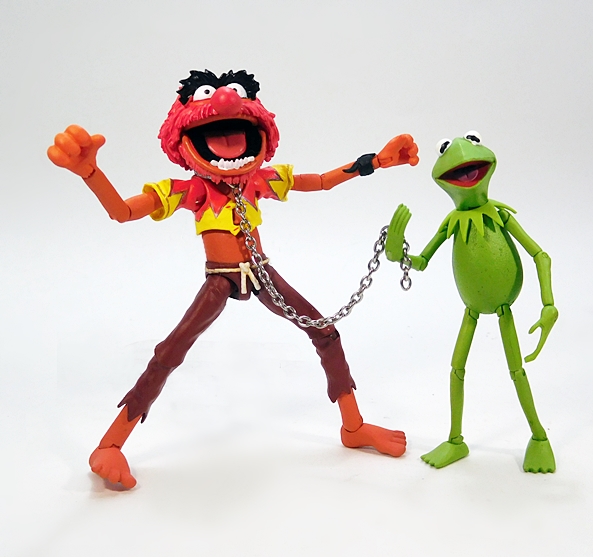 If I was wavering a bit after the first Series of figures, Animal here has put me back on track to believing in this line. I’m absolutely delighted with the way this set came out, and as importantly, I’m thrilled to see that DST is committed to getting all of Electric Mayhem out within the next couple of waves. My dedication to collecting The Muppets has been rekindled, so don’t be surprised to see a bunch more Muppet Mayhem in the coming weeks!