I’m not bringing back regular Wednesday content. Honest! I’m not. But I’ve got about a month before things get crazy for me at work again, so I thought I’d take advantage of it and try to get caught up. As a result, I’m doing TWO Star Wars Black Series reviews today: Hera from Rebels this morning and the Stormtrooper Executioner from The Last Jedi later tonight.

Hasbro has been killing it with their realistically styled 6-inch Black Series figures from the Star Wars Rebels cartoon. These have been among my favorite Black Series releases, despite the fact that I’m forever woefully behind on watching the series. I think I’m just going to have to grab the Blu-Rays and binge that shit one of these weekends. Still, I’ve been hoping against hope that they will at least get around to completing the crew of the Ghost and now we’re one step closer. So far we’ve had Kanan and Sabine, and technically you could add Ahsoka to that mix. Today I’m checking out Hera! 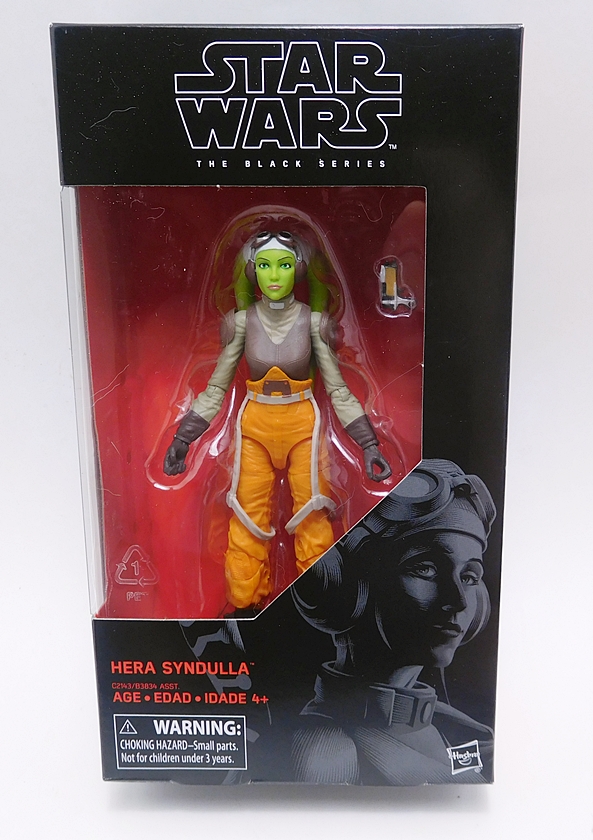 The figure may be pulled from Rebels, but the packaging here is branded just like all the rest of the Black Series in full monochrome glory. I’m not a big fan of the character art they went with here, but that’s been a sticking point with me for most of these releases. Then again I toss the packaging anyway, so I’m not going to get upset over it. I actually wound up ordering Hera from an online retailer a few days before finding three of her on the pegs at a local Target. Then I saw the paint was all over the place and got worried, but turns out the one I got is pretty solid. Anyway… I love Hera, I love me some lady Twi’leks, so this was a hotly anticipated release for me!

I’ve always been a little perplexed by Hera’s outfit. At first, I thought it was just a typical flight suit with the top zipped down and worn down around her waist. But the more I watched, the more I realized it’s like some kind of flight-suit overalls. Whatever the case, I like it. It gives her the unmistakable look of a pilot in the Star Wars universe, while not over encumbering her upper half. The flight suit portion is cast in orange plastic and suitably baggie and includes the typical straps that come down off her belt and encircle her legs. Above the waist, she wears a tan-green long sleeve shirt with a reinforced armor vest and shoulders. There’s a nice bit of sculpted detail in the armor pieces, including some scratches from wear and tear. Otherwise, this is a fairly simple outfit, very close to the CG model in the show, and it looks great in this realistic format.

Hera features a functional holster on her right ankle, and as you all should know by now functional holsters make me happy. Also, while I’m down there I might as well mention that she has extremely tiny feet. These can make her a bit of a chore to stand, especially when attempting action poses. 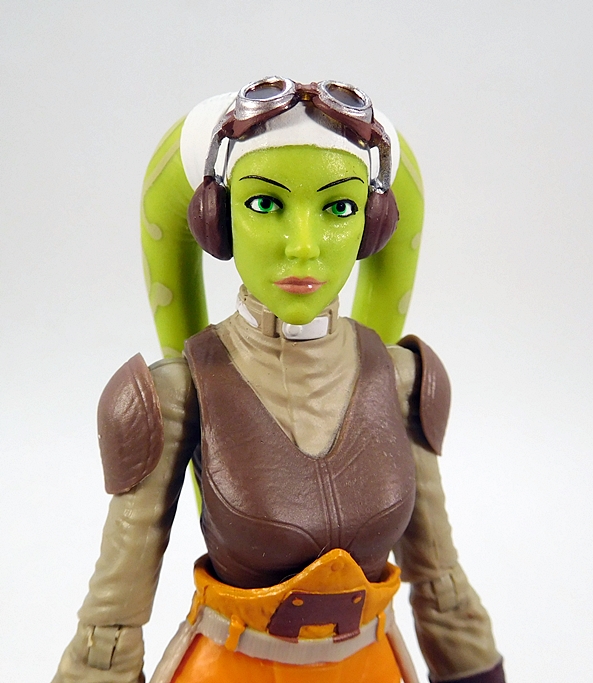 I couldn’t be happier with the portrait here. Hera’s face is beautifully sculpted and features a fairly neutral expression with just a hint of a smirk on her lips. The paint applications on her eyes and lips are crisp and perfect, as are the patterns painted on her tendrils. The hood has some sculpted ribbing and the goggles are actually sculpted as a separate piece and include tinted clear lenses, but they cannot be lowered over her eyes.

The articulation here is solid, with rotating hinges in the shoulders, elbows, and wrists. The legs have ball jointed hips, double hinges in the knees, swiveils in the thighs, and both hinges and lateral rockers in the ankles. She has a ball joint under her chest, and both a ball joint and hinge in the neck. 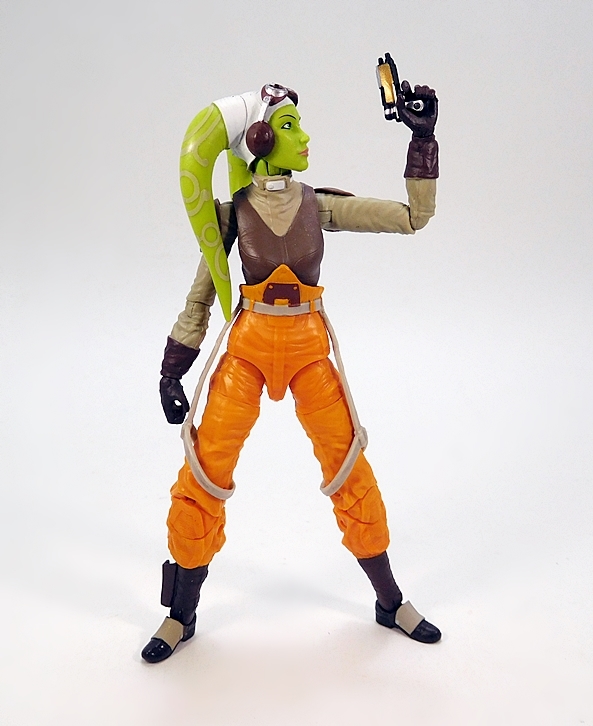 Hera comes with her little blaster pistol, which is a pretty unique design. It’s as ugly as sin, but it’s also discrete. I’d like to think she keeps it because it’s reliable and trustworthy and has gotten her out of more than a few scrapes. She can hold it in either hand, but her left hand is clearly sculpted with the trigger finger. I don’t remember her being left-handed in the show, and it wouldn’t make much sense to have the gun on her right ankle if she was, but I’m not about to get too worked up about it. 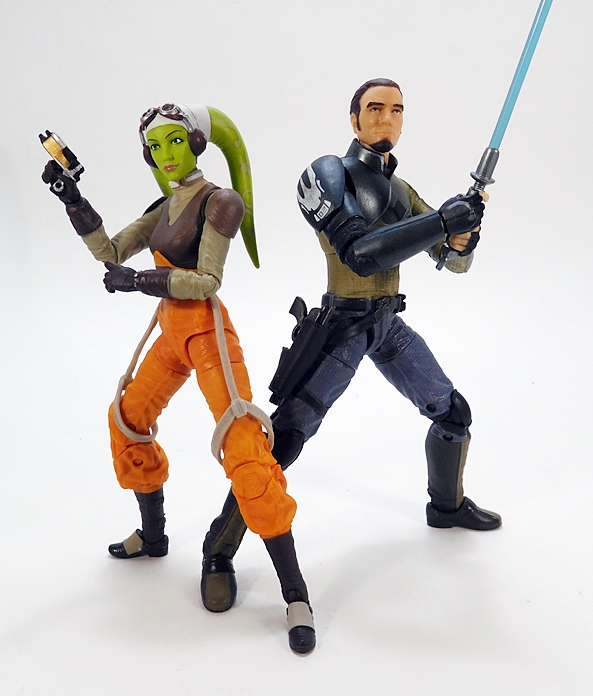 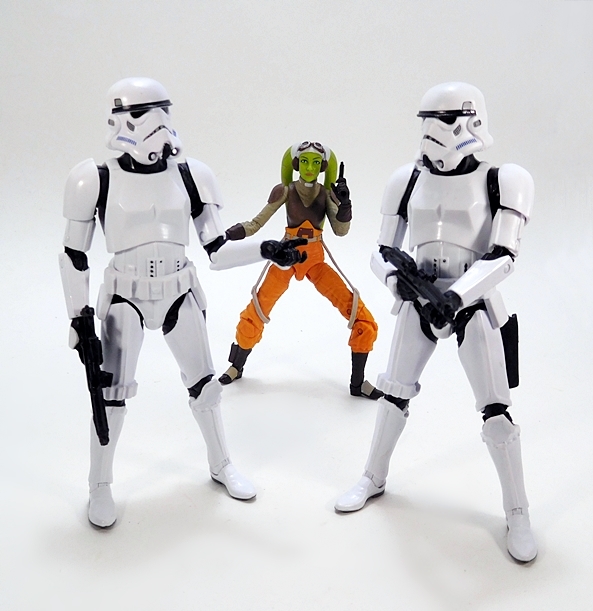 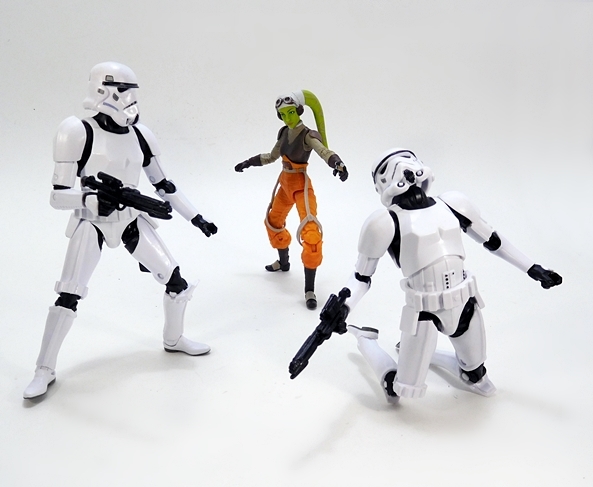 And here we are, another Rebels 6-inch Black Series release, and another excellent one at that! I could say I wish she came with some more stuff, like maybe a tool kit or an A-Wing helmet or something, but I’m still plenty happy with what we got. I’m also glad that Hasbro put the Stormtroopers back onto the pegs, because I picked up a couple more to go with her! It’s probably not a coincidence that two of the three Ghost crew left may be tough to do in the new style. I’m really curious to see what a realistically sculpted Ezra will look like, and I can’t even imagine what they’re going to do with Zeb. Hopefully we’ll get Chopper next.