As promised, I’m back with an extra-helping of Marvel Legends goodness on this Marvel Monday. Earlier today I looked at Spider-Man and tonight I’m looking at… Spider-Man! There are actually no less than three figures in this wave simply called “Spider-Man,” but of course they are all unique figures. This one is a comic-themed release and can be regular Peter Parker hosting the Uni-Power, or Cosmic Peter Parker from Earth-13, or simply Captain Universe, depending on which head you want to display him with. Ahhh, but I’m getting a-head of myself (HA!). Sorry. Let’s look at the damn figure…

Holy shit, look at that box! The packaging on mine got really chewed up, possibly literally. As if there are dogs roaming the warehouses in Amazon making snacks of the merchandise. But I care not. He was super cheap and I just toss the packages anyway. I do get a kick out of the fact that Cosmic Spidey is looking down like he’s ashamed of the state of his packaging. Well, let’s get him out of there and we’ll start out with the stock head. 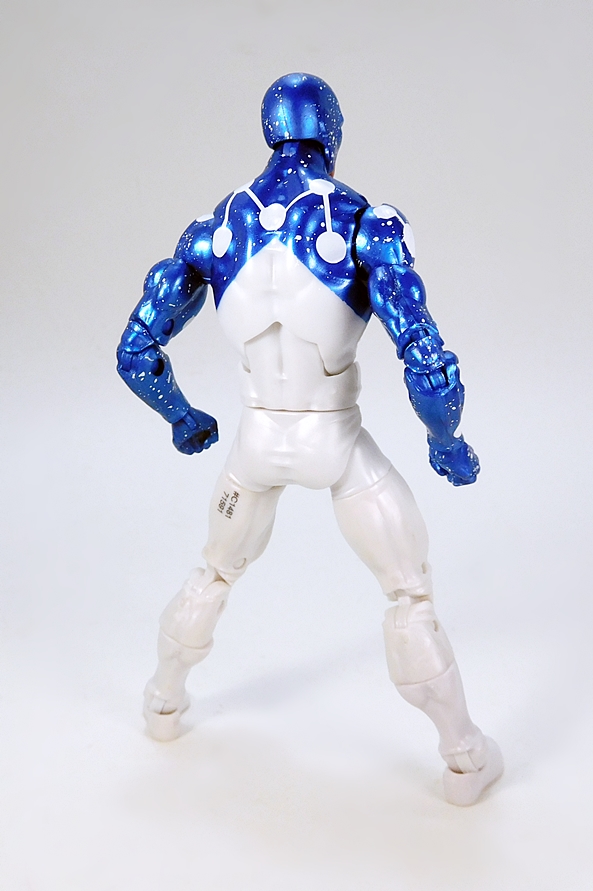 If you’re more of a casual Marvel fan, this figure might be giving you a little case of Deja Vous because the color palate is very similar to the Vance Astro figure we got back in the Titus Wave. Indeed, the lovely metallic blue paint appears to be the same, although the white here is comprised of a striking pearlescent white plastic. Overall I think the effect here is much better and absolutely gorgeous even if it does play havoc with my camera’s color balance. The connected circle patterns are neatly painted and he has some white speckling that looks great. He may be just a basic buck, with virtually no unique sculpting from the neck down, but the coloring here elevates that buck to something truly special. 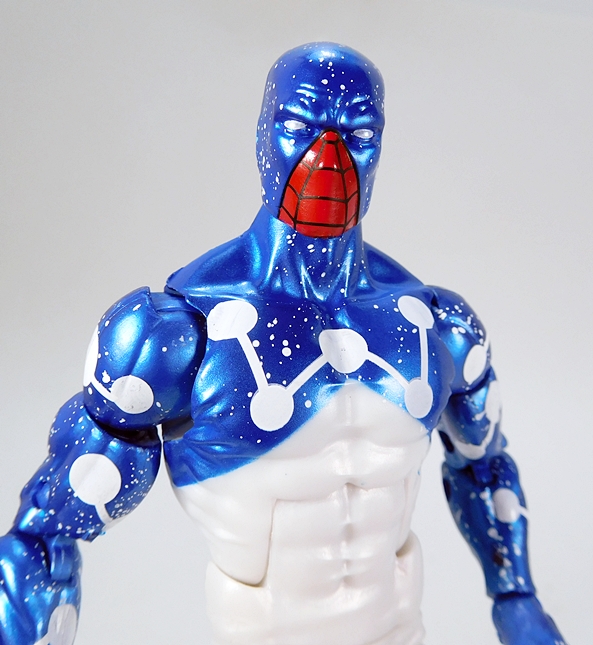 Indeed, Hasbro probably could have gotten away with just repainting the Vance Astro head for this one, but they didn’t. Now, I’ll be honest, I have very little memory of this appearance, other than Spider-Man was fighting some Super Sentinel and there was a follow up What If? ish about him actually keeping the Uni-Power and retiring as Spider-Man. I’m also not a huge fan of the look here, as it’s basically the Captain Universe cowl with Spider-Man’s mask appearing through the mouth hole. Meh, it’s OK, the paintwork is excellent, but I can tell you right now this is the head that will get the least display time. And by least, I really mean none. 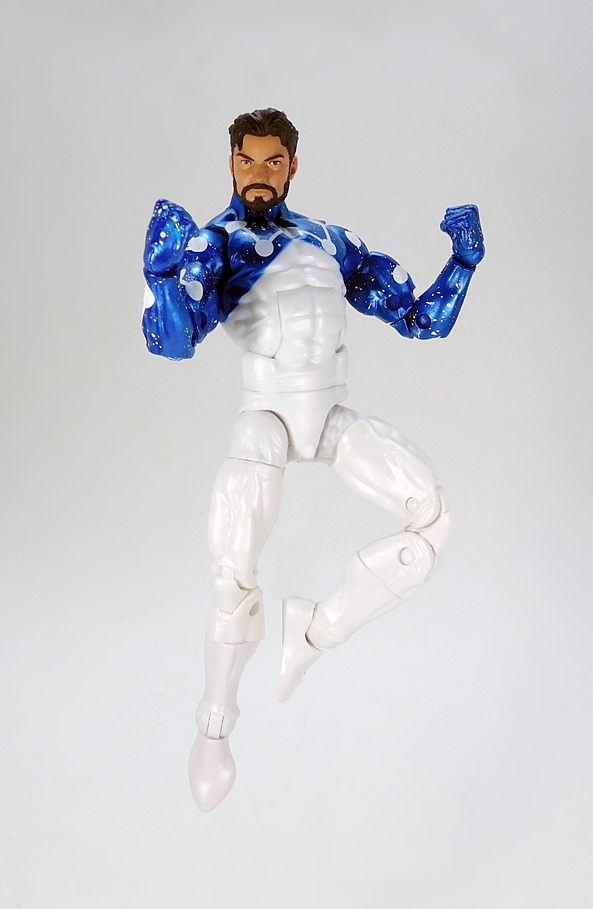 Next up, we have the Earth-13 Peter Parker head from Spider-Verse and oh boy did I love this scene. Uni-Powered Pete basically tells the Spider Totems to scatter and heroically proclaims, “I’ll handle this!” only to get his ass kicked by Solus, Patriarch of The Inheritors. It was a sobering experience for the Spider Crew who were quickly learning that nobody was going to be able to save them. Anyway, this is a great looking sculpt and it would definitely be the one I’d go with for my default display if it weren’t for…

Regular masked Captain Universe! Actually, I’m calling this one Ray Coffin and I can’t even tell you how stoked I am to have this figure. Captain Universe is a cool idea and all, but the fact that he originates from the Micronauts Universe raises his coolness factor in my book by a thousand fold. Now I can say I have a modern Micronauts figure on my shelf, and not those shitty ones Hasbro did for the SDCC Exclusive set. Needless to say, this is the noggin that I’ll be displaying 99% of the time. 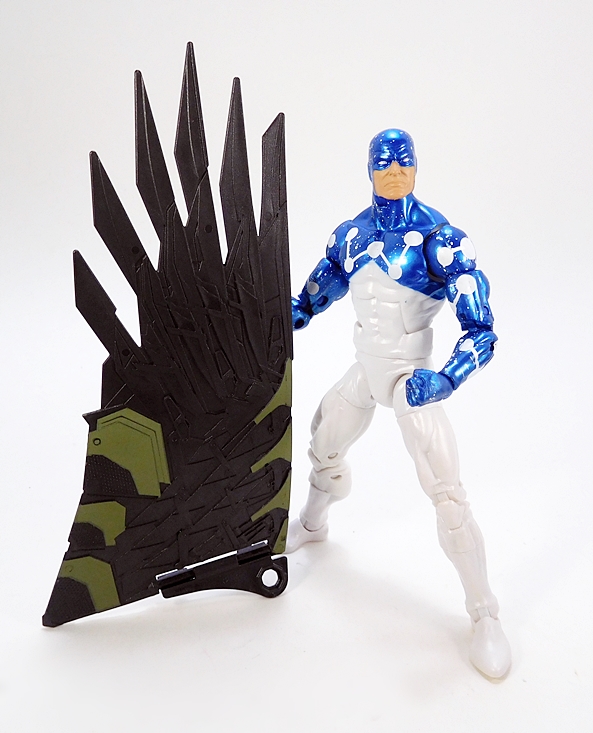 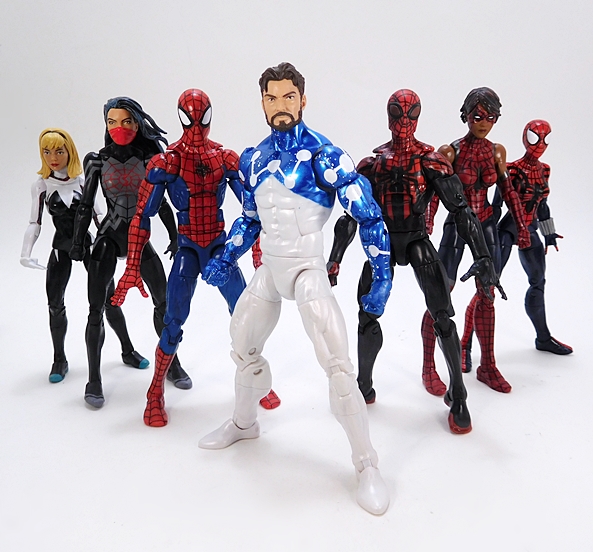 Hasbro could have easily just popped the stock head on this guy and made Captain Universe the cheap-o figure of this Wave, but I think it’s really cool that they dropped the two extra heads into the box as well. If this figure drops in price on Amazon like some of the pegwarmers out there, I can easily see myself picking up one more so I can at least get one extra for my Spider-Verse shelf. And with Spider-Man Noir and Spider-Punk both revealed, that shelf is getting more and more crowded!