If you follow me on Twitter than you probably know that I’m a big fan of Zenescope Comics. I started reading their flagship title, Grimm Fairy Tales, a while ago as a guilty pleasure and slowly got sucked into the wider universe of characters and other books until I had an entire shelf devoted to their floppies, trades, and a few limited edition hardcovers. Plus, since Marvel has forsaken me with their bullshit, I’ve been leaning on Zenescope a lot more lately as a new outlet for my comic book dollars. Sadly, there’s been precious little in the way of Zenescope merchandising, with the shining exception being a small assortment of Sixth-Scale figures from Phicen and Executive Replicas. I’ve already looked at Mercy Dante and Robyn Hood, Today I’m going back to their very first release: Liesel Van Helsing! 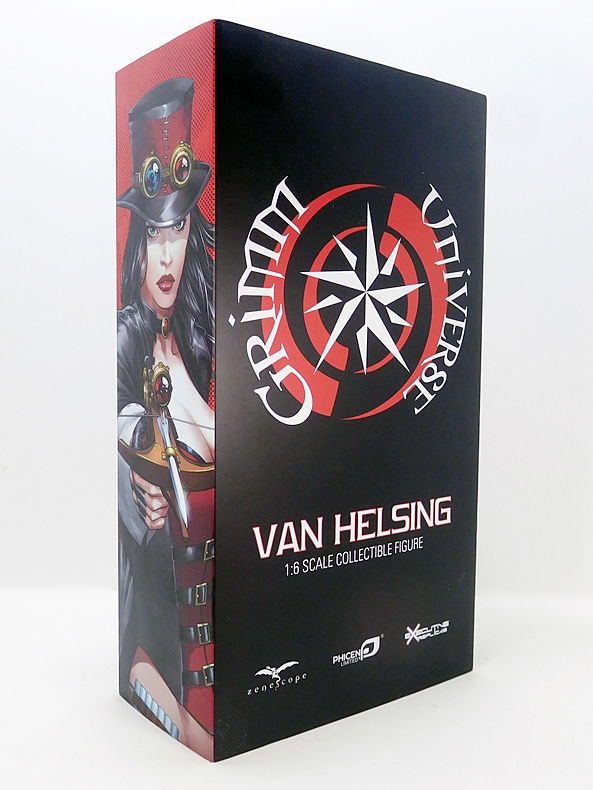 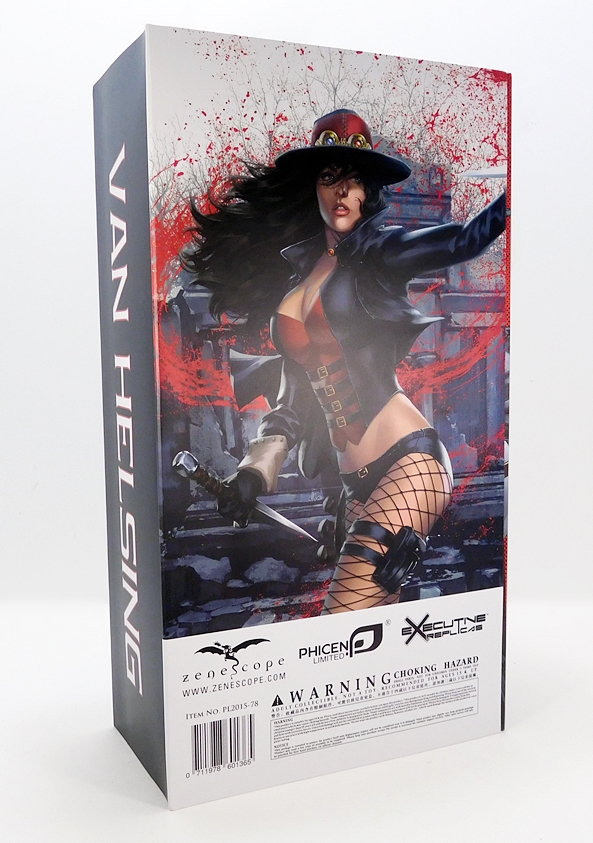 The packaging is still quite similar to the two followups: Robyn and Mercy. And the presentation here is first rate. You get a wraparound sleeve with the Grimm Universe logo and the figure’s name on the front as well as some wonderful character art on the back and side panel. The other side panel has the figure’s name so you can line these up on a shelf and still tell who is who. The high-quality box is black and textured with a magnetic front flap and a foam tray that contains the figure and accessories. The packaging rarely ever makes or breaks a collectible for me, but when you’re paying a lot it’s nice to get a premium presentation. This is definitely a lot more effort than Hot Toys has put into the packages for their recent releases, and I appreciate that, especially from such a small company.

And here she is all ready for action. Van Helsing features the ever amazing, and a little bit creepy, Phicen realistic super-flexible body. I’ve lost track of which particular model body this is, as they’re constantly making changes and improvements, but suffice it to say, you get a stainless steel skeleton wrapped in a shapely silicone muscle and skin, which feels squishy to the touch and only shows seams at the neck and wrists even if you were to strip them down. Oh yes… and enormous boobs. Because Phicen. And Zenescope. There isn’t a whole lot of set up required to get Liesel ready for display, but she does come with her trench coat off and getting it on is a MAJOR pain in the ass. Besides having to deal with the friction of getting the realistic silicone rubbing against the sleeves, you also have to pop her hands off and getting the hands off of the steel ball joints is frustrating. Once this jacket went on, there was no way I was taking it off again. The same goes for the accessory holding hands, so I’ll mention now that she does come with an extra pair of relaxed hands and a pair of fists, even though you won’t see them used in this review. Now… let’s take a quick trip around her outfit. 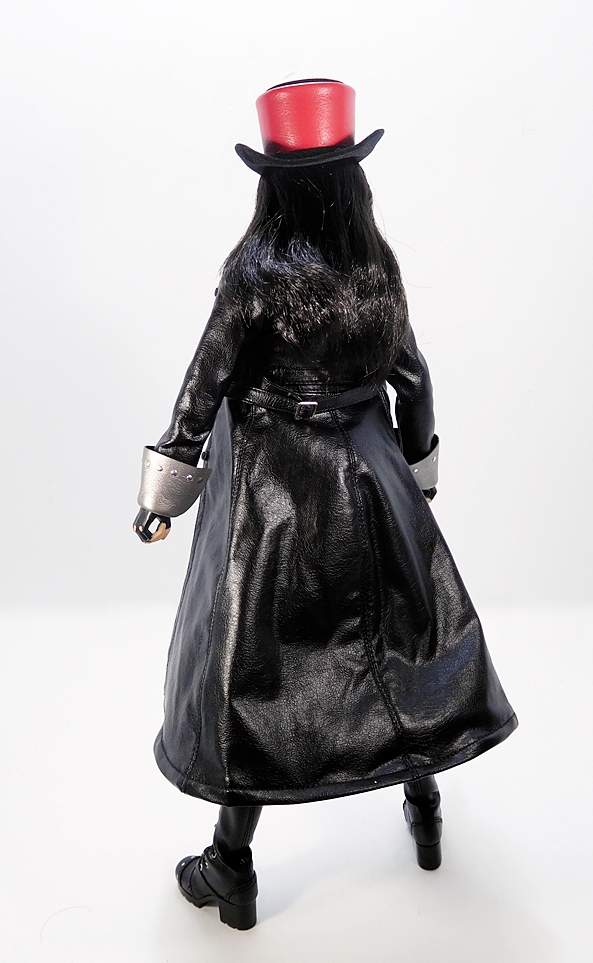 As a girl displaced in time, Liesel’s wardrobe has had several looks throughout her various appearances, but Phicen went for her most traditional and iconic 19th Century monster hunter garb. And might I say, they did a fabulous job with her costume. The troublesome trench coat is great once it’s in place and features a belt on the back so it can be cinched tighter and there’s a wire in the bottom so it can retain a flowing look for those action poses. It’s a cool blending of modern and vintage, with the big buccaneer sleeves to give it that hint of period attire. 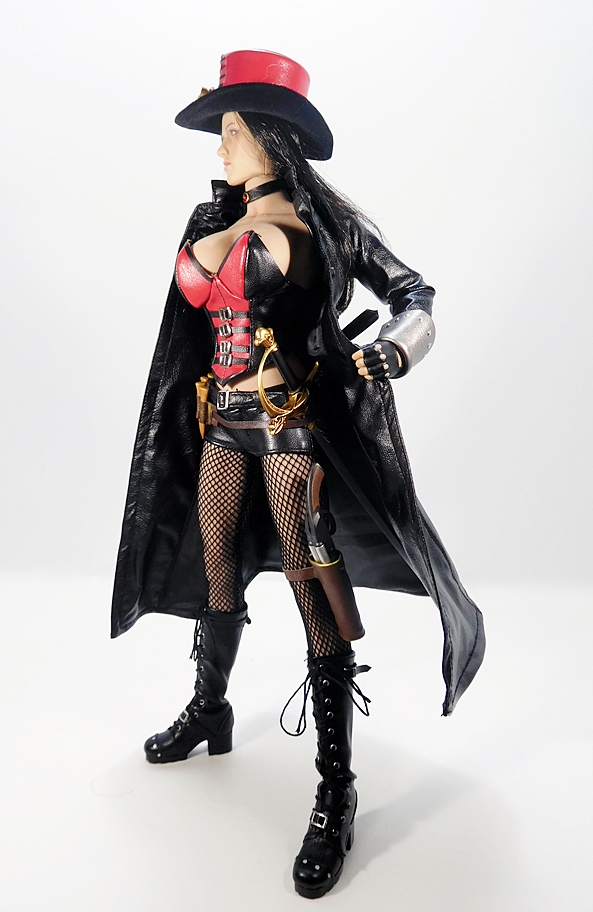 The red and black corset is made out of a similar leather-like material with four individual belts running across her tummy and two pointed half cups tasked with the momentous job of keeping her goodies in place. These can be a little frustrating because there is about a two millimeters difference between them doing their job and Liesel suffering a nip-slip. I had to do quite a few re shoots to keep this review at a PG rating. Moving further down, she sports a very scant pair of tight shorts some real fishnet stockings. The stockings are done very well, although you do still get some bunched up seams, which are probably impossible to avoid at this scale. 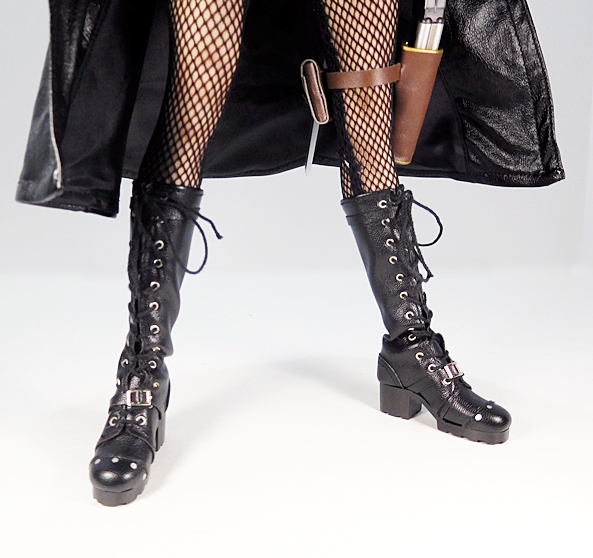 The high boots feature buckles running across the fronts and real laces running up to the top. I am going to presume that these are boot-feet, but I’m not about to unlace them to find out. 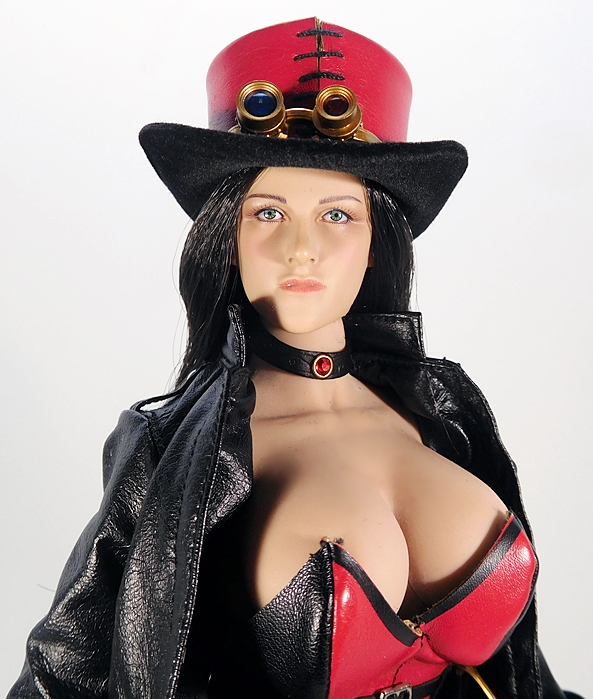 The head sculpt is fair but not exceptional. It’s a far cry from what we got for Mercy and Robyn. Those were sculpted specifically for those figures and definitely looked the part. This one appears to be one of Phicen’s generic heads, as I can see a lot of resemblance to some of their other boxed figure releases. Still, Liesel can look a little different from book to book depending on who’s drawing her, so I don’t think using this head was a total flub. Plus, this was their first release in this line, so I’m prepared to cut them a little slack. Besides, I think she has really pretty eyes. At least the long black hair is very much on point, and when you include the choker necklace and her trademark hat, it’s easy for me to tell who this is supposed to be, even if I were just seeing her from the neck up.

The hat is spot on to what she’s often wearing in the comics and is comprised of both leather-like material and felt. It holds its shape perfectly and it also includes Liesel’s rather distinctive glasses. These can be removed from the hat and worn over her eyes, but it’s not like she does that a lot in the comics, so I’m happy to keep them where they are.

Most of Liesel’s equipment can be worn on her person and she does possess some nifty monster-slaying tools, albeit none of the truly outlandish stuff she invents in the comics. For starters, she wears a brace of stakes on her right hip. She comes with five wooden stakes and five silver ones. I went with the wooden ones for my display because I liked the look of them a little better and I am a traditionalist. A better prepared monster hunter would probably mix them up for when you have to switch between dispatching vampires and werewolves on the fly. 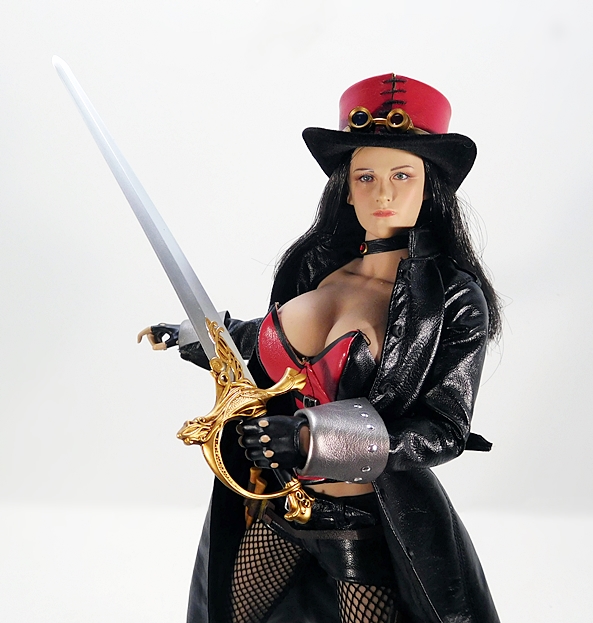 There isn’t a proper scabbard for her sword, but it can be easily thrust through the belt on her left hip and it looks good there. The sword features a short thrusting blade and a rather ornate hilt with a curved knucklebow and sculpted pommel. It fits perfectly in the intended left hand and the fingers are flexible enough so that it’s easy to bend them and get the sword in place. As is sometimes the case with Phicen’s accessories, the sword does feel a little flimsy in hand and the blade is a little bendy, but overall I think it looks great. 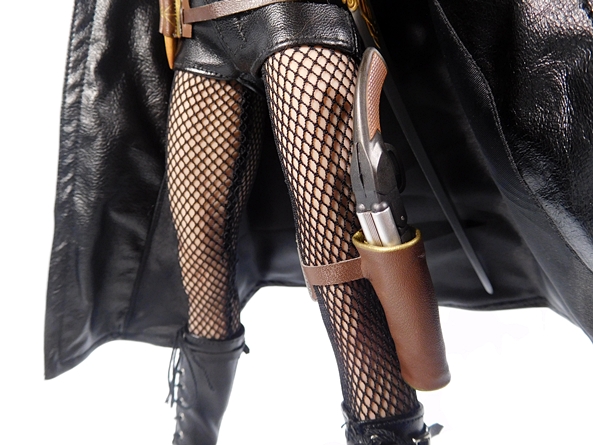 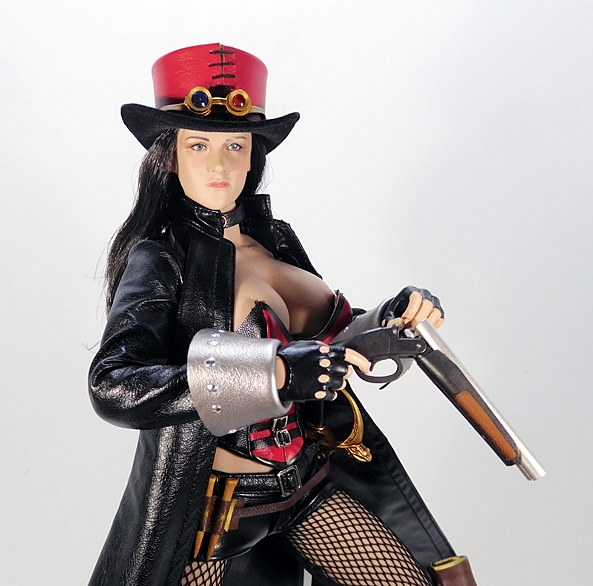 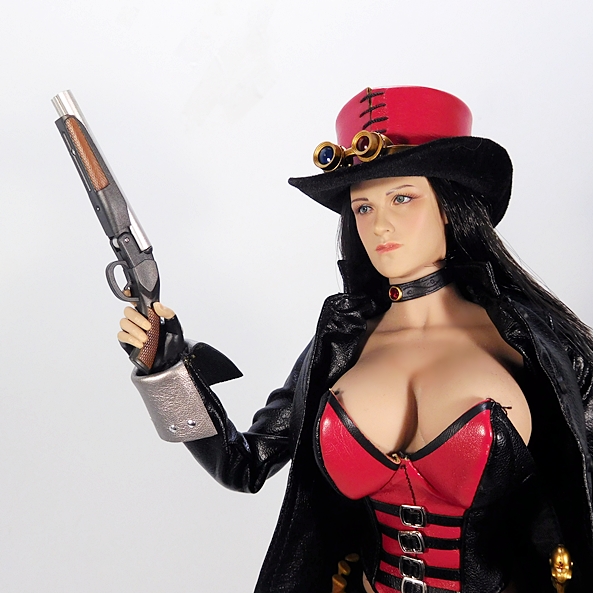 The strap on Liesel’s lower right thigh includes a holster for her shotgun and there’s an ammo pouch as well. And yes, she comes with two teeny-tiny extra shells to put in there if you want. The breech on the shotgun can be opened and there are two more teeny-tiny shells sculpted inside. The sculpt and finish on the shotgun is beautiful. It features checkered brown grips and a gunmetal blued finish with a stainless steel finish on the barrels. Her accessory holding right hand fits it perfectly.

Next up is her crossbow, which is painted to resemble wood with some lovely steampunk-looking fixtures and a scope. It’s also fitted with a string, which can be drawn back and hooked on the catch so you can load one of the five silver bolts into it. Liesel also comes with a quiver for the extra arrows and a hook to store the crossbow, but it’s designed to work with her when she’s not wearing her trench coat, and since I’m always going to display her with it on, it’s not a lot of use to me and it tends to stay in the box. 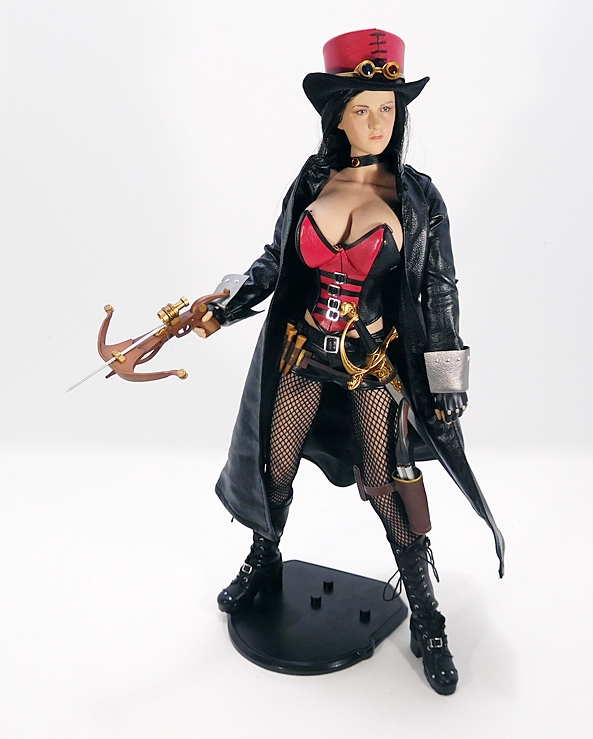 The final extra is a figure stand, which normally would be a no-brainer, but Robyn Hood didn’t come with one, so it’s not always a given when it comes to Phicen’s Sixth-Scale figures. Indeed, even my recent purchase from ThreeZero didn’t come with a stand, so I guess packed in stands aren’t as common as they used to be. Anyway, Van Helsing’s stand is identical to the one that came with Mercy. It has a base with a post that can hold the figure, but the post isn’t very helpful. The base, however, has thick pegs, which connect with holes in the figure’s boots just like a standard 3 3/4-inch figure. It’s an odd system to see in these larger scale figures, and the base isn’t anything special, but it works pretty well. 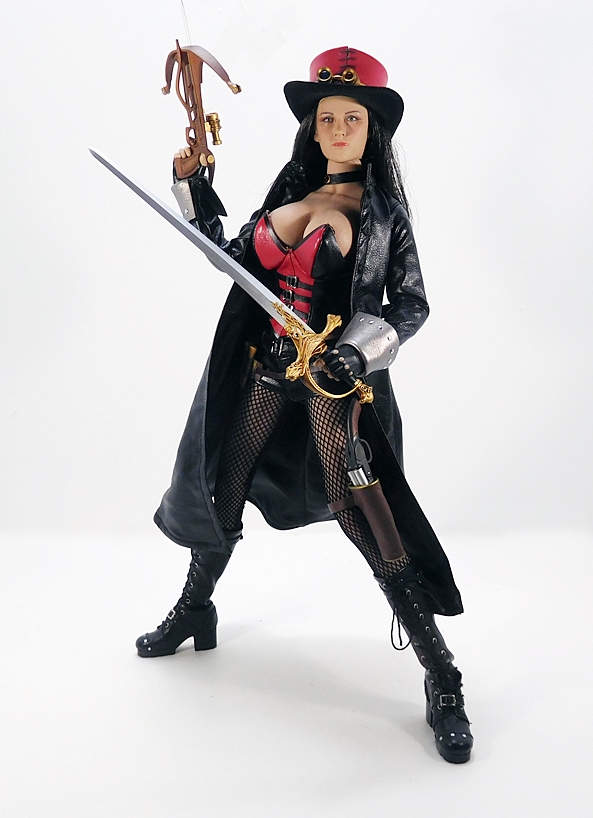 Liesel set me back about $150, which feels like a pretty good value in the current Sixth-Scale market, especially since the subject matter here is for a pretty limited audience. As much as I love the character, I can’t imagine her books sell more than 4,000 copies, so to get an action figure of this scope and quality based on her is a real treat. Not to mention that she comes with a lot of stuff, her outfit is carefully detailed, and the Phicen body provides endless fun for posing. I was also lucky to not have to pay a lot over her retail, since I started collecting this line late in the game and had to track her down. I eventually found her in the last but most obvious of places, Zenescope’s website, and I’m convinced I may have gotten the last one because she was removed from the site a day after I successfully placed the order!

On the downside, I’m not sure that the relationship between Phicen and Zenescope has much of a future. They showed off a Goblin Queen figure from Grimm Fairy Tales at one of the big Comic Cons a couple of years back, but it appears to have been quietly cancelled. They do have a figure due to ship any week now based off The Goddess of Death, Keres, from No Tomorrow and Grimm Tales of Terror, but they took a lot of liberties with the design of that figure to the point where it just looks like it’s loosely based on the character design. I don’t know that I’m going to pull the trigger on it. I’d like to support the line, but at this point I don’t buying that figure will save it. It’s a shame, because a release of Sela Mathers, Brittany Waters, or Belinda would have been fairly easy to do and my collection feels rather incomplete without at least having Sela on my shelf.