Howdy, folks! Thanksgiving may be behind us, but I’m always thankful for another Marvel Monday! After a brief Thor: Ragnarok-related detour last week, I’m finally back on track and continuing on with the Gladiator Hulk Wave of Marvel Legends. I’ve already checked out the MCU figures, and today I’m starting with the comic based figures and Ares!

The movie branding may be gone from the packaging, but this is still a Thor-themed wave. Ares shares a slot with Thor Odinson as one of the “Nine Realms Warriors” and this may indeed be one of the heaviest Marvel Legends boxes in all of those Nine Realms! Not only is Ares a bruiser, but he comes with a lot of stuff, including Gladiator Hulk’s massive hammer. Back in the day, Toybiz released Ares as a Build-A-Figure, but I never got around to completing him. I did, however, pick up Hasbro’s 4-inch Marvel Universe Infinite, or whatever they were calling it back then, Ares and that little guy remains one of my all time favorite Marvel figures in that scale. Can this release live up to that kind of pressure. 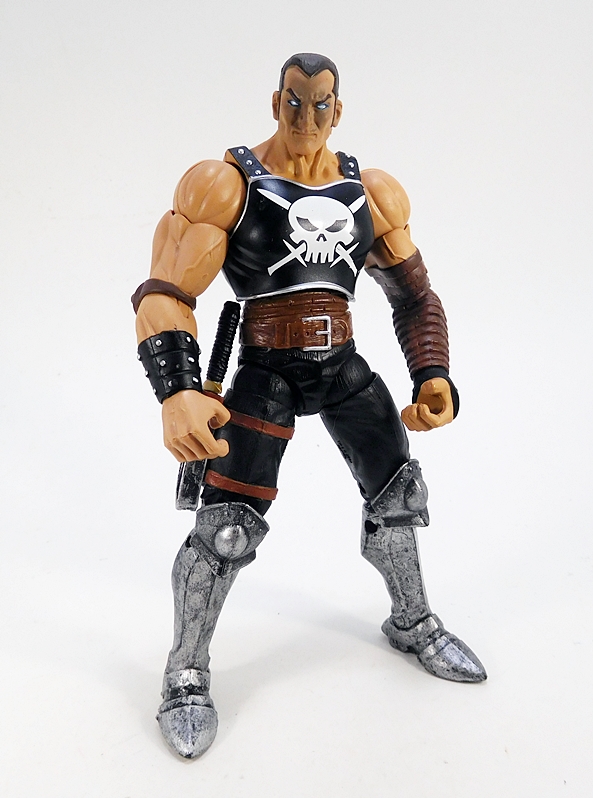 Hell yeah he can! Just check this guy out. This Greek God of War is a damn powerhouse and he looks fantastic. I do have a few quibbles about him, but we’ll save that for articulation talk. For now, let’s just bask in all there is to love here. For starters, the sculpting looks fresh and new and that’s always a treat in a line that makes use of a lot of recycled parts. The chest armor is sculpted as part of the buck and features simulated studded shoulder straps to hold it on, his mid section is characterized by sculpted leather and a wide belt, and there’s some nice texturing on the trousers. His right arm features a studded wrist bracer and spiked elbow pad, while his left has a segmented leather sleeve running up to his bicep and another one of those spiked elbow pads. Ares also features a functional sheath on his right leg to hold his knife.

And then you’ve got some excellent coloring! Ares’ black armor is dominated by the sharp Skull and Crossed Swords printed on his chest. You get some precise silver paintwork on the edges of the chest-plate, as well as the studs on his straps and wrist bracer, and again on his belt buckle. But the real star of this figure’s paint is his boots. No offense intended, but the gorgeous tarnished metal effect of his leg armor looks too good to be on a Hasbro figure.

I love the head sculpt, but ironically every time I look at it, I’m just reminded of DC’s Black Adam. I think it’s the chiseled facial features and the haircut. It’s not really a bad thing, but something I funny. Maybe Hasbro should keep this head sculpt in mind for after they buy out Mattel and launch DC Legends. Yeah, probably never going to happen, but I can dream. With that having been said, there’s a lot of personality in this face and I really dig his wry smile. 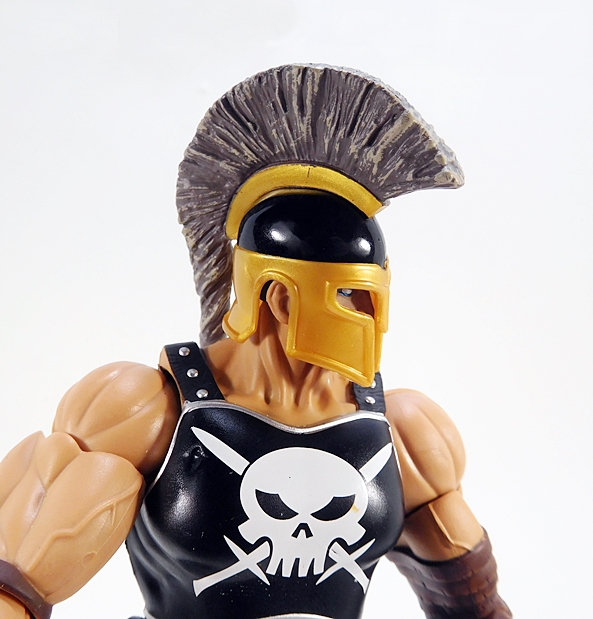 Of course, Hasbro even equipped him with a removable helmet. The helmet fits perfectly and looks great, although I’d argue that the bare gold plastic is the weakest part of this figure’s deco. The glossy black paint is a nice touch, and the bristles on the come have a cool wash added. 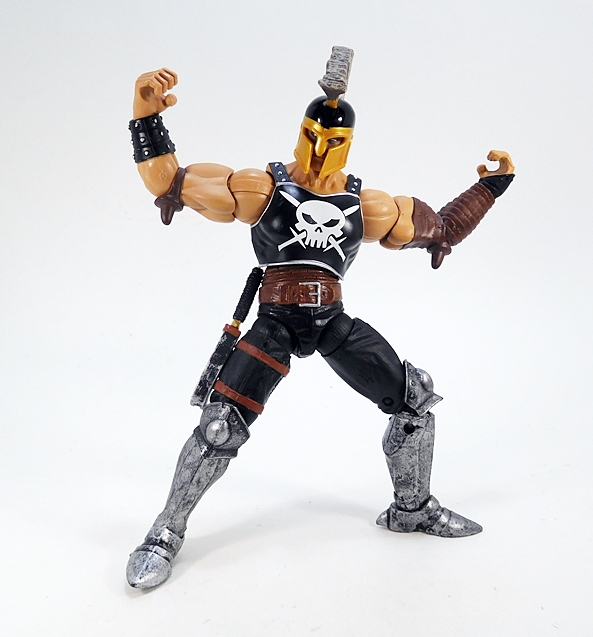 So let’s talk articulation, and here’s where the figure stumbles just a tad in a few places. The arms feature rotating hinges in the shoulders, elbows, and wrists, and has swivels in the biceps. I really would have loved to see double hinges in the elbows, because those elbows he has don’t have a lot of range. I can’t even get 90-degrees out of them. Plus, you don’t really need rotating hinges in the shoulders when you have a bicep swivel. The legs have those old fashioned ball joints in the hips. They work pretty well with the figure, but still look a little out of place. Below that, you get double hinges in the knees, swivels at the hips, and both swivels and lateral rockers in the ankles. The torso features a really nice ball joint in the chest. The neck has only a ball joint, and boy do I miss the additional hinge Hasbro usually tosses in there. Ares is perpetually looking down a bit.

In addition to Hulk’s arm and huge hammer, Ares comes with his own extra large sword and axe. The axe is a formidable looking weapon with a double edged head. It features some sculpted scrapes and scratches showing heavy wear and the edges are painted silver. The grip is segmented and Ares can wield it in either or both hands.

As much as I love the axe, I think the sword is the more impressive of the two weapons. It’s a pretty utilitarian design, with an elongated two-handed grip, a simple gold guard, and a massive blade with some nicks and cuts sculpted into the edges. My only complaint here is that Ares doesn’t have a loop on his back so he can wear it when he’s not using it. 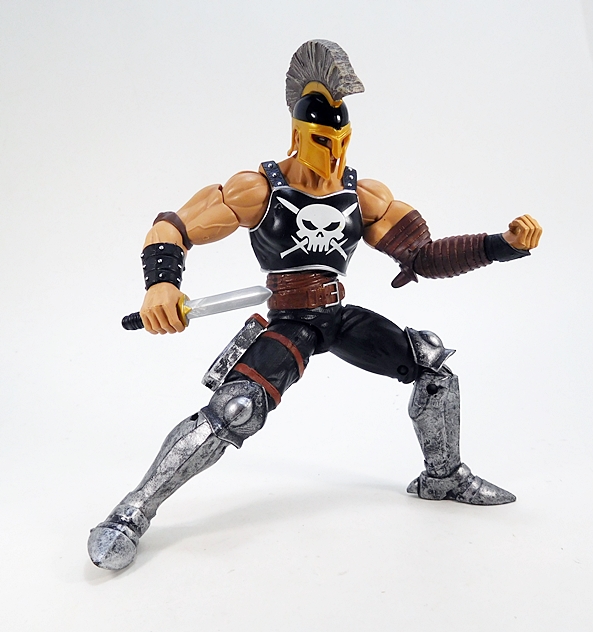 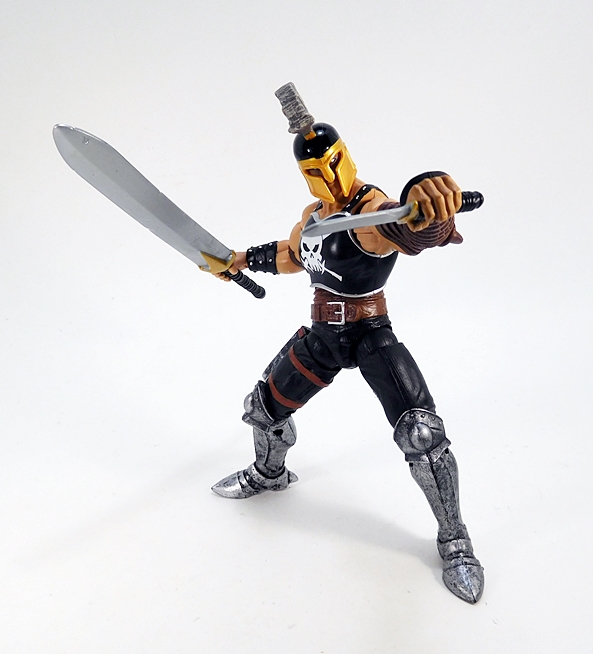 And finally, Ares also has a dagger in his scabbard for when he grows weary of simple butchery and wants to get in close and do some fine cutting. The dagger is painted and sculpted to match the sword pretty well. 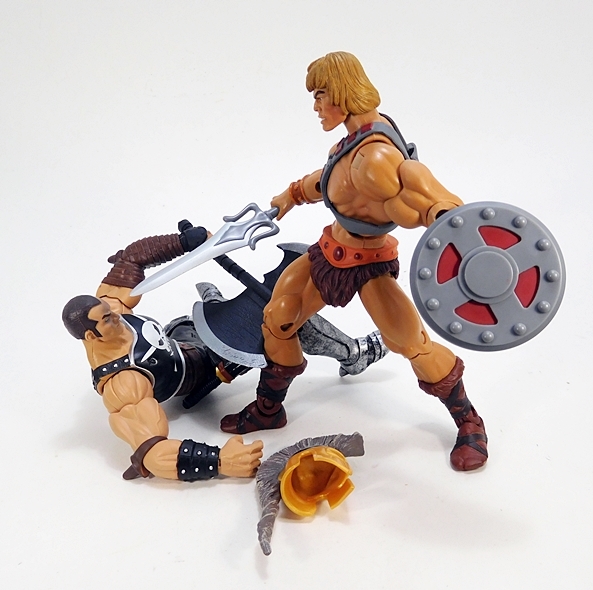 Oh yeah, it’s also worth mentioning just how perfectly Ares fits in with the Masters of the Universe Classics figures. Hey, that’s good to know for when Hasbro buys Mattel and they launch the MOTUC Legends line and OMG, I KNOW NONE OF THIS WILL EVER HAPPEN, I’M JUST KIDDING!!! Oh, and don’t worry, the skirmish depicted above was just a misunderstanding based on Ares’ choice of chest armor. They eventually cleared everything up and had laughed it off over a couple droughts of Eternian Ale.

Ares is one of those figures that I would wholeheartedly recommend even to collectors who aren’t into Marvel characters or Marvel Legends. He’s just a beautifully done figure with some great accessories and he’s loads of fun to play with. Sure, some tweaks to the articulation would have been welcome, but Ares is a freaking tank of a man, so the fact that he isn’t super agile is probably understandable. With how solid the MCU figures in this wave have been, it’s nice to see that Hasbro is maintaining that standard with the comic based figures too. Next week, I’ll check out Thor Odinson!