Hasbro has been rolling out their new Power of the Primes line at retailers this past week, and yes I have already picked up the first wave. But, I’m not ready to give up on Titans Returns just yet. Maybe next week I’ll start busting into some of those Deluxes. For now, I’m checking out Six Shot, a Leader Class figure that I would have probably skipped if I didn’t come across him at half price. I know, that’s not exactly a ringing endorsement, but let’s see if this big bastard can surprise me. 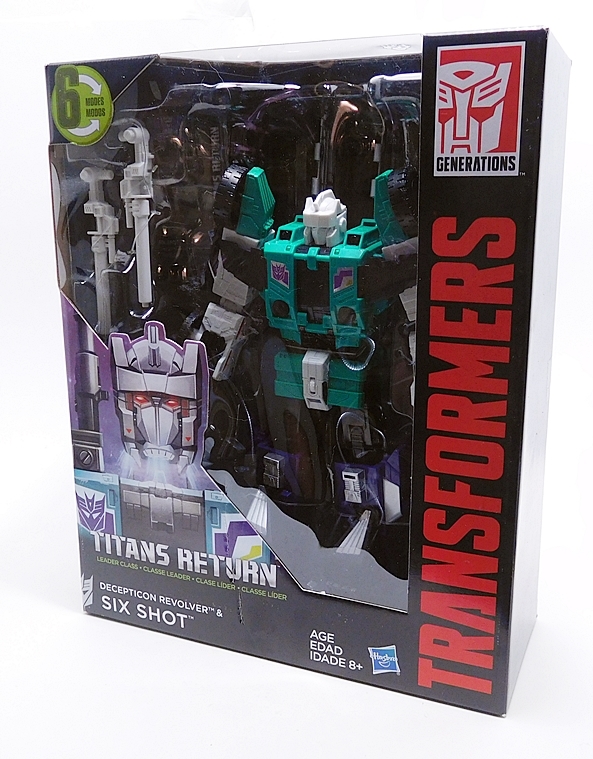 Six Shot and I do not have a history together. His original toy was released pretty late in the game, when I was around 15 and just not into toys anymore. Yeah, it sounds crazy, but it would take me another 15 years and a healthy amount of disposable income, to come back around to buying toys again. But even if I wasn’t taking a toy-buying sabbatical back in 1987, I don’t know that I would have been interested. I’m just not all that into the law of diminishing returns that tends to apply to Transformers with more than two alt modes. And so with that context being laid out, let’s open this beast up. As a Leader Class, Six Shot comes in a nice big window box and packaged in his robot mode, and in this rare occasion I’m going to start there before working my way through his various alt modes.

And yes, I know I’m in store for some pretty iffy alt modes, but let’s first take this time to enjoy how great this robot mode looks, because I think it’s going to make up for a lot of those sins. I can feel the G1 styling coming off this guy in waves and I love it. He’s big and his design hails from a time when robots weren’t ashamed of their boxy bodies. It doesn’t look like Hasbro tried to reinvent him or ultra-modernize him. They just rebuilt him with better articulation, improved proportions, and better sculpted detail. For fans of the original, all the points are still there. He’s got wheels and treads mounted to his arms and beautiful wings rising up from behind his back, not to mention chest wings! There’s a decent amount of sculpted detail to the body, including some panel lining and details intended for his many alt modes. There’s also a delightful generic nature to his robot mode that doesn’t give away much about what he’s going to turn into. Wings? Wheels? Treads? Holy shit… is that the undercarriage of a wolf head hanging off his ass? We’re in for quite a ride!

The coloring is really tight too and a damn near perfect homage to the original toy. You get that distinctive green plastic for the torso and upper shoulder pylons, the white for his arms, the purple for his lower legs, and the rest all filled in with black. The wings on his back are painted with that gorgeous silver that Hasbro has been using lately, and also includes some green and purple paint hits. There are some foil stickers too, and unlike some of the other stickered figures in Titans Return, these aren’t placed in areas that are likely to cause problems down the road. Sure, all stickers eventually peel, but these look like they have a chance to go the distance. 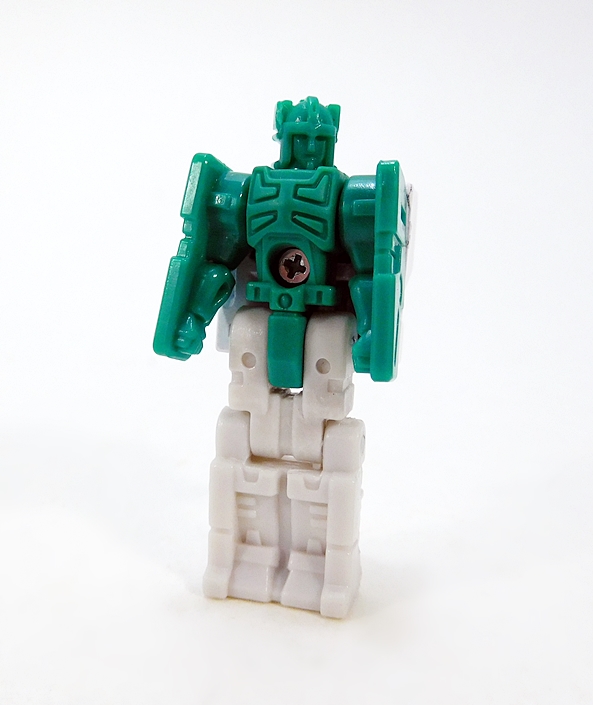 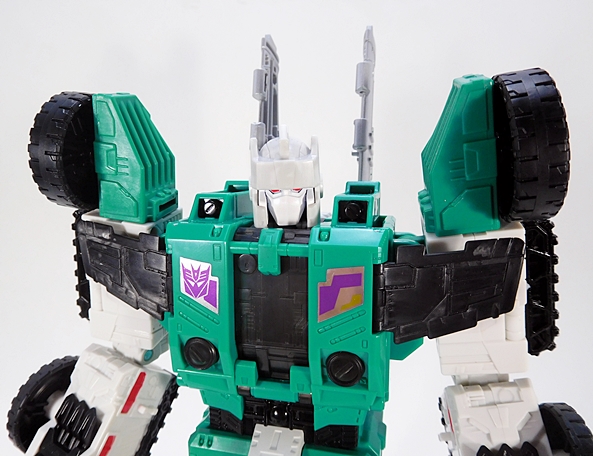 Six Shot’s Titan Master is called Revolver, which is a perfect name for him. He’s a pretty typical little HeadBot and mimics Six Shots green and white color scheme. There’s no other paintwork on him and he features the typical robo-noggin articulation with a swivel in the neck, ball joints in the shoulders, and hinges in the hips and knees of the fused legs. Also like the bigger Bots in this series, Revolver’s head mode sits inside a larger helmet to help him scale out for the larger robots, but still make him workable on the Deluxe Class figures. As for his head mode, it’s all white with red eyes and a big mouth plate, and as cold and featureless as ever.

Six Shot comes with twin rifles, which can fit into each of his hands. It’s worth mentioning that these are a really tight fit. His articulation allows for some fun action poses, but since he lacks ankle articulation, or really ankles of any kind, he can look a little clunky in some of those poses. Yes, the chest wings do get in the way of his shoulder articulation, but you can hinge them out to move them out of the way. Likewise, his pelvic flaps are also hinged so as not to impede that hip articulation.

You can also combine his guns together for when you want to make a stronger statement. Dual wielding Six Shot is definitely a more iconic image for me, but I kind of dig the way this combined gun looks. OK, so we lingered long enough on what an awesome looking robot Six Shot is. Let’s move on to those alt modes. 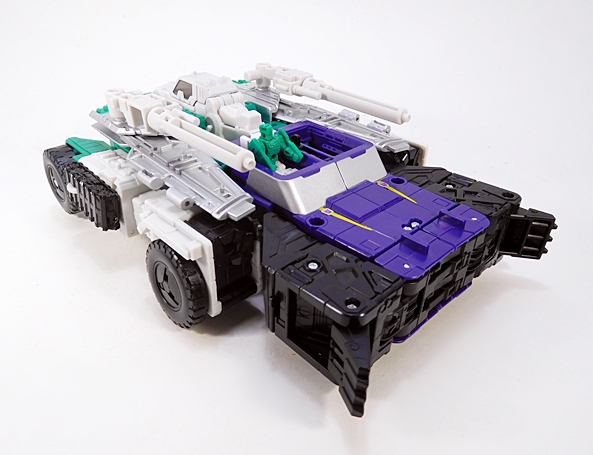 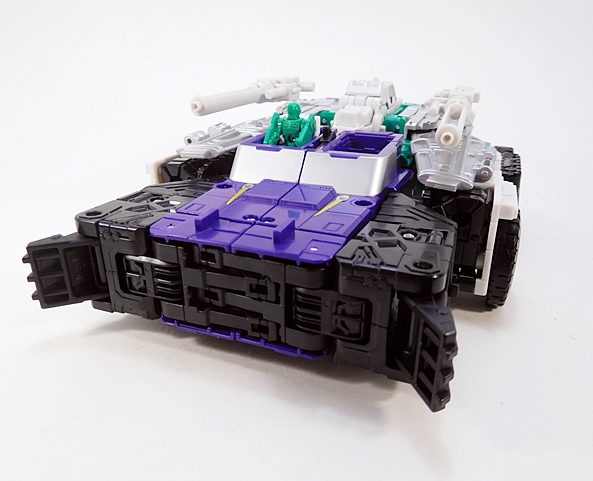 First up is the truck and it’s not too bad. It has a clearly defined purple cab with silver windshields, a very boxy front and two angled pieces that look like a snow plow or maybe some kind of ramming scoop. It’s kind of weird how the drivers sit in the open cabin area, but at least I can tell what they were going for here and I don’t hate it. It hints at some Earth truck designs, but it works best as just a squat Cybertronian transport. It rolls pretty well on four wheels and there are a few different places you can put the guns.

When viewed from behind, it can get a little confusing as to which is the front and which is the back, because there’s a little driver cabin facing the back as well. Honestly, it looks just as good driving this way as it does the other. Indeed, if you point the guns to the back, you can practically make a new mode out of this. A big part of that is because the back of this truck mode is pretty close to the front of the tank mode, so let’s check that one out next.

I don’t know that the word tank really describes this thing. It’s more of a general attack vehicle. Like the truck, it’s not too bad. It would have been cool if they could have had the top pieces open up to reveal rocket packs or something. This vehicle kind of reminds me of a cross between some of the Transformers: Cybertron designs and Transformers: Animated Blitzwing’s tank mode.

The driver’s cabin can open and Revolver can sit inside. There are also some pegs scattered around so you can load it up with other Titan Masters before sending it into battle. In all fairness, I can’t say this thing is all that much worse than Broadside’s jet mode, and he was just a Triple-Changer not a Six-Changer. I’m going to give this one a pass too. The truck and tank modes take care of the land-based vehicles, next we take to the seas with the submarine mode.

Yes, this is the submarine mode.. I’m stating that clearly up front because there’s absolutely no reason that any sane person would come to that conclusion without being told first. This mode can also be termed a goddamn abstract leap of faith. Now, I’m willing to cut Hasbro a little slack on this, because it’s really just G1 Six Shot’s pistol mode turned upside down, but you can’t go around making robots turn into guns in this day and age. That would be crazy and irresponsible. Now, I know what you’re thinking. Doesn’t Hasbro sell Nerf guns that look a lot more like real guns than this stupid thing. Guns that actually shoot projectiles and are called guns? Stop trying to apply logic to the situation. There’s definitely a double standard going on. Let’s just accept that and move on. Anyway, this mode is crap, but I’d probably be a lot cooler about it if it weren’t so blatantly obvious that the front is just the truck mode with guns stuck on the front, and if there were some way to reconfigure the clearly visible wheels on the back into some kind of propellers by just having them point to the rear. Next up, we take to the skies with the Space Cruiser mode. 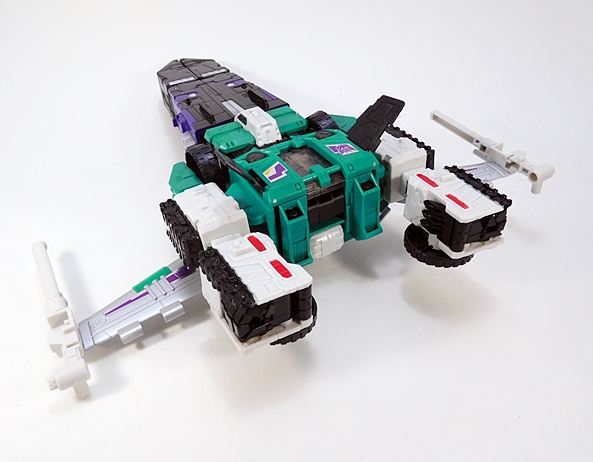 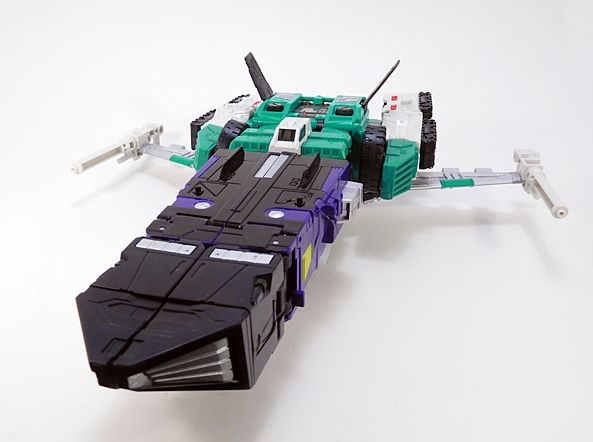 The space cruiser mode is really solid, and definitely my favorite of all of them. This mode alone justifies Six Shot as a Transformer to me. I dig how the front portion looks like it could be a carrier deck for receiving fighters. There’s a tiny cockpit in the center, but the actual cockpit is behind that where Revolver can sit inside the translucent panel. Or, you can keep him as the head and just fold the helmet inside to get it off the back of the ship. There’s a single fold down landing gear to help this thing stand, and the guns tab into the ends of the wings to give it some added firepower. OK, that leaves us just one mode left, and I saved the best for last. 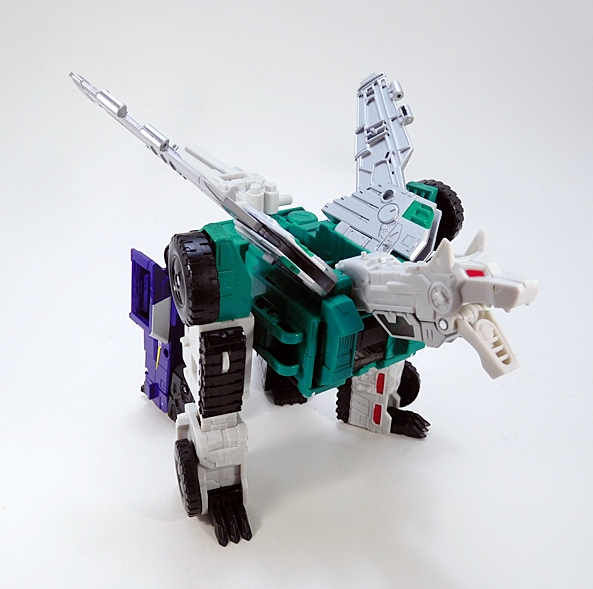 Just kidding, it’s the Winged Wolf mode! This mode is not only crap, but it makes me really angry, and I’ll tell you why. The other modes may have been so-so, but they more or less incorporated generic components into them to make them work. It’s almost like they’re just ancillary fan modes that the designers were able to come up with in order to make Six Shot a Six-Changer. In this case, they literally sculpted and added a wolf head just for this goddamn terrible mode, so there’s no excuses. What I’m trying to say is: THIS IS ARGUABLY THE MOST INTENTIONAL MODE SIX-SHOT HAS AND IT LOOKS AWFUL! Not only does it look bad from all angles, but from the side it just looks like the robot mode bending backward with a dick gun and a wolf head coming out of his chest. Yes, this mode triggers me. Sorry, but I can’t help it. 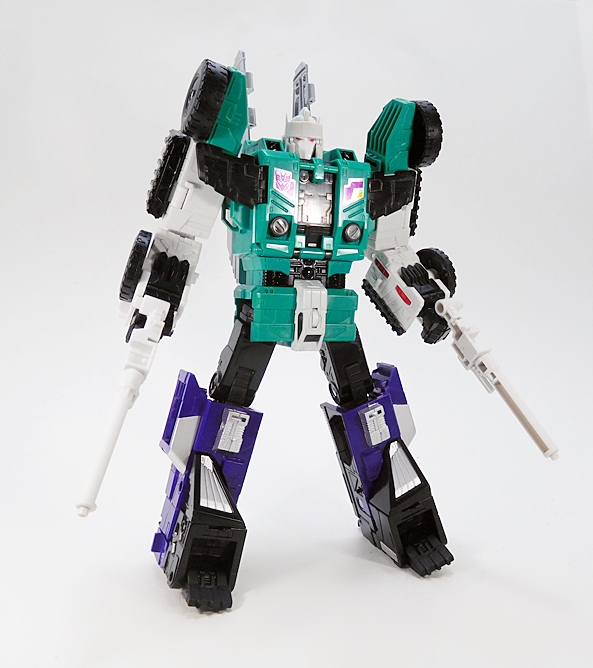 In the end, Six Shot does not change my feelings toward Six-Changers, but I don’t want to end this review on a sour note. There is undeniably a lot to love about this figure. In fact, I think Six Shot is arguably one of the most faithful G1 updates that Hasbro has ever done, and that alone is worthy of celebration. The robot mode looks great, has fun articulation, and while his alt modes are understandably a mixed bag, they follow those of the original toy almost perfectly. I have to imagine that anyone who has fond memories of Six Shot as a kid is going to absolutely adore this figure… even his goofy and f’ugly Winged Wolf mode! Granted, that’s not me, and I still think I would have ended up skipping this bot at full price, but at the $25 that Amazon was blowing him out for, I can’t say that I’m sorry to have picked him up. If nothing else, he’s another big bruiser to add to my Decepticon shelf, and he looks mighty fine towering over the Deluxe Class figures.