Welcome to another Double Feature for DC Friday! And after some spotty weeks without new DC content, it feels good to be doing these again! Last week, I knocked out the first half of the DC Multiverse Ares Wave with a look at Diana and Hippolyta. Today I’m going to finish up the four figures needed to build the C&C figure by opening up both Wonder Woman and Steve Trevor! 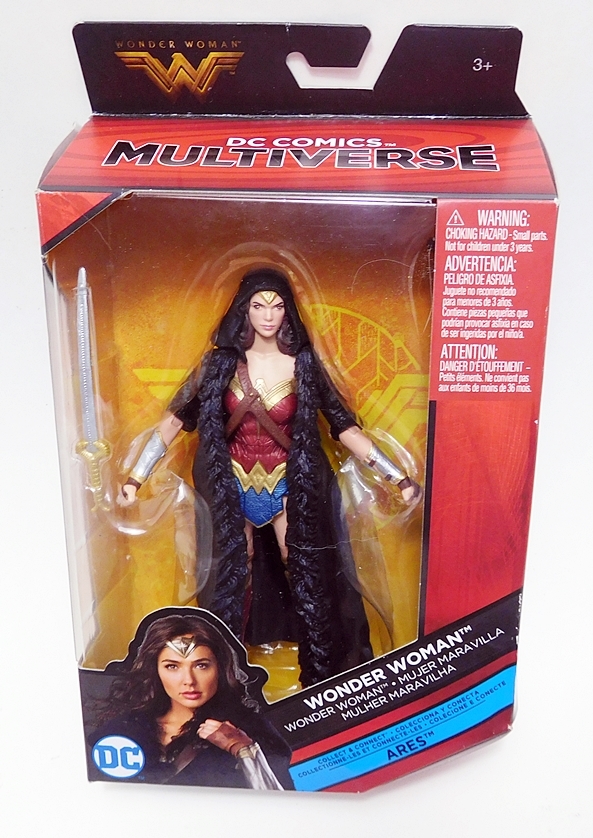 And here’s Wonder Woman in the box, and I’ll go ahead and point out the obvious by saying this is Diana wearing her black cloak over her costume. It’s a look that she adopted for some very specific sequences in the film and it’s probably not the iconic look that most fans and collectors are looking for. There is a more traditional version (sans coat), but oddly enough that one is a Toys R Us Exclusive and is not necessary to build Ares, but does come with some optional extras. And yes, I will be looking at that figure, as well the other TRU Exclusive of the wave, Menalippe, next week. For now, let’s get Diana out of her box and check her out. 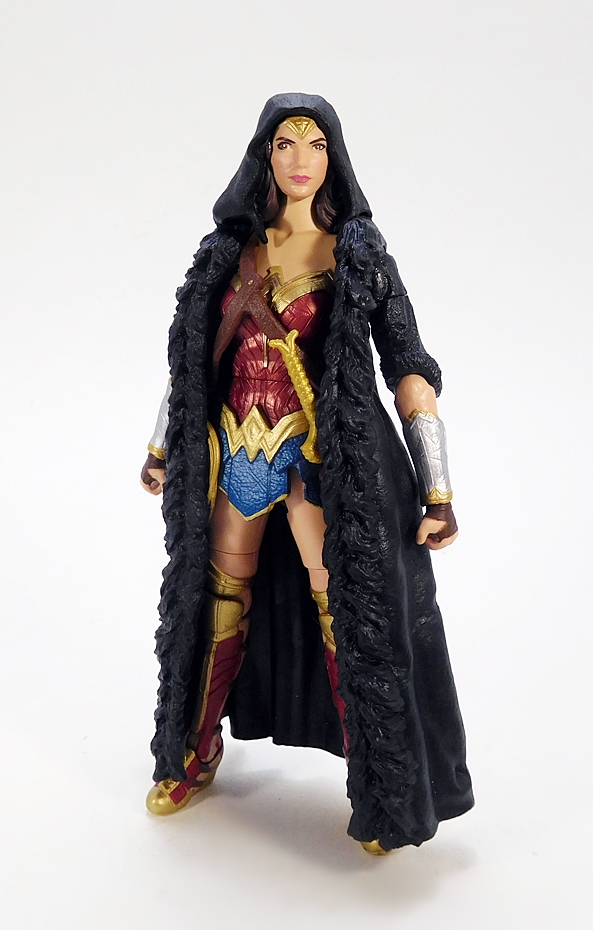 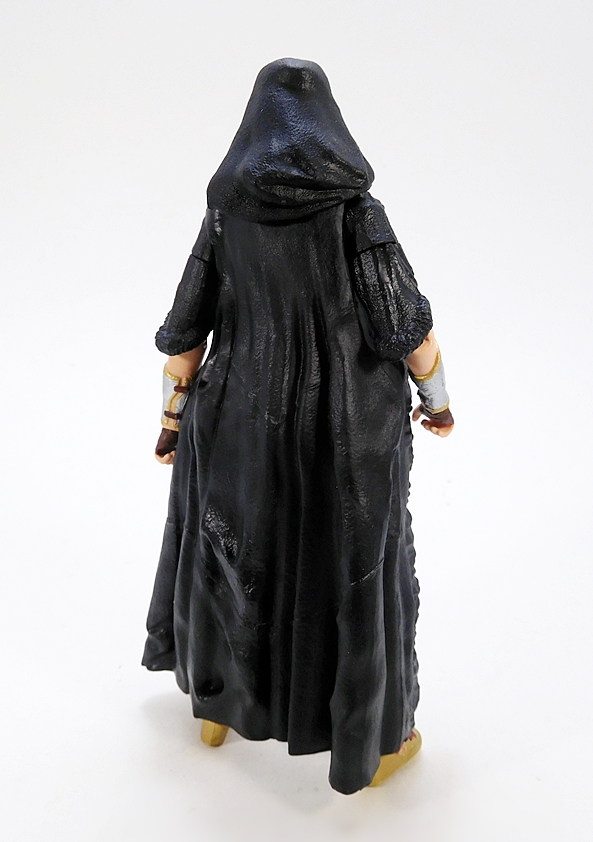 While I don’t own the Multiverse Batman V Superman Wonder Woman, this one looks like this is a re-sculpt of that previous release. She’s been fitted with a soft plastic sleeveless coat, and her arms have been sculpted with sleeves on them to resemble part of the jacket. It looks good, I like the sculpted fur fringe, although it does cover up a lot of the beautiful work they did on her rather iconic outfit underneath. And damn, it is a beautiful outfit, with plenty of detail, and some snappy red, blue and gold paint. I’ll actually save some of that gushing for when I review the TRU Exclusive version. 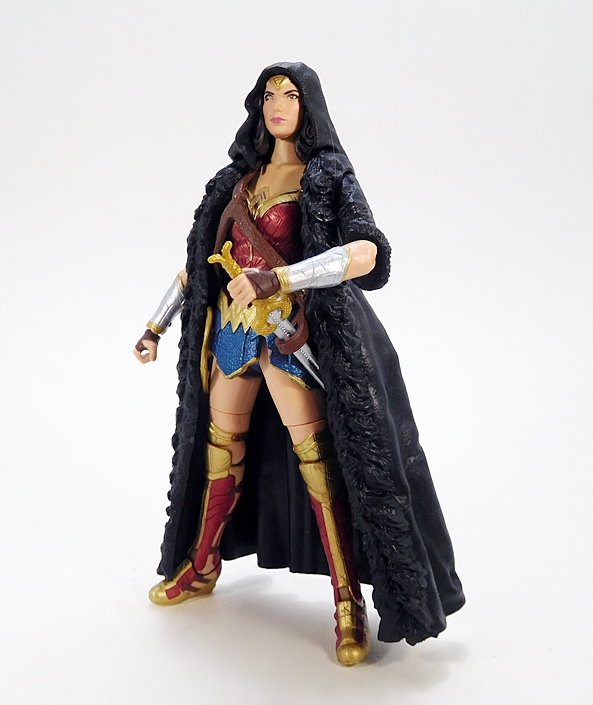 Diana also sports the shoulder strap, which is sculpted from a separate piece of soft brown plastic and features a loop for her sword and her lasso. The lasso loop works well and pegs into place securely, although the sword loop pits the sword against the cloak, making it a difficult fit. And while I appreciate the ability to store her equipment, I do wish this rig was removable. Alas, it’s permanently attached to the back of the figure. Some deft work with a razor could probably get it off of there, but I think I’ll keep it. 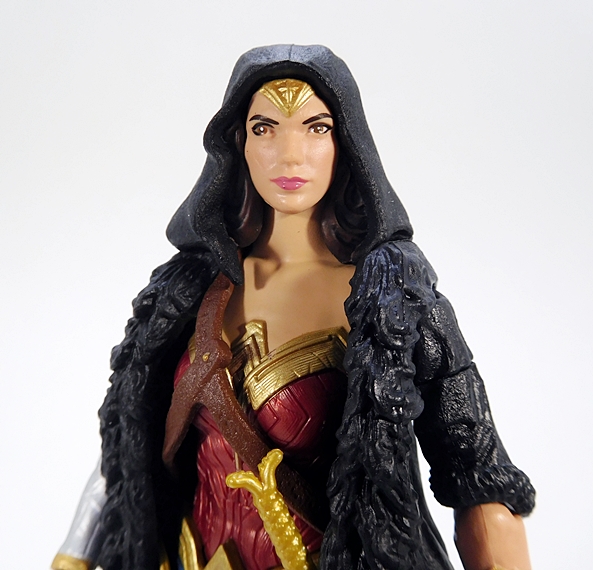 The head sculpt is also unique to this figure, as it features an integrated and non-removable hood. It looks good and allows her to still have working neck articulation, while still convincing me that it’s supposed to be part of the cloak. The overall portrait is OK, but it’s certainly not a great likeness for Gal Gadot. I can see a little of her in there, but it’s fleeting. Also, they seem to have missed the white paint on my figure’s right eye. I’d argue that such lofty goals as good likenesses are too much to expect from a 6-inch mass market line these days, but then I look at some of Hasbro’s MCU figures in Marvel Legends and realize that solid likenesses can be done at this scale and price point. You just have to work harder at it, Mattel. 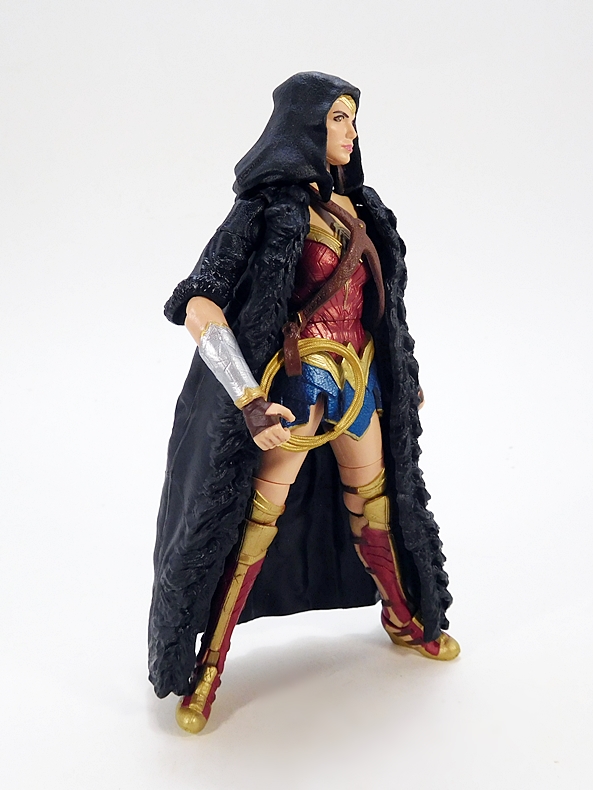 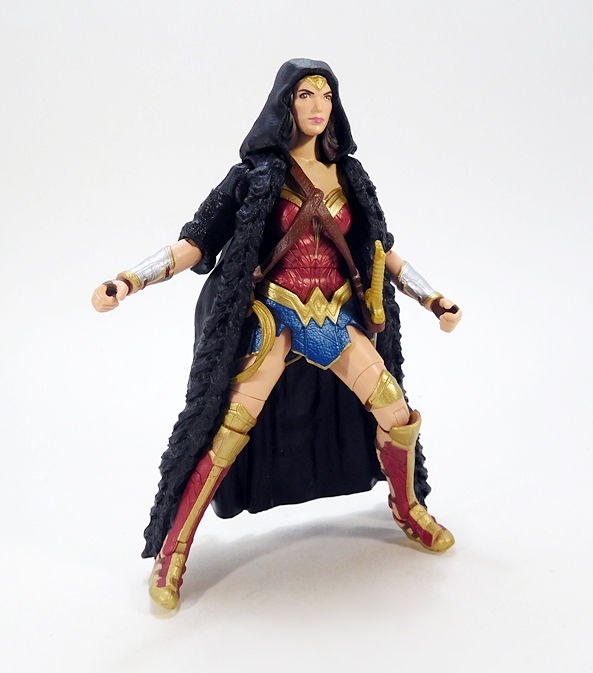 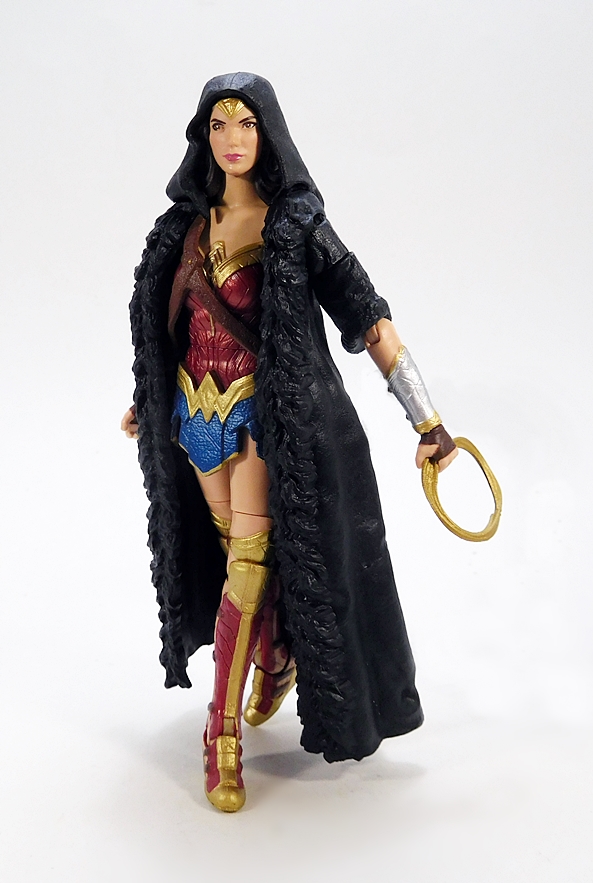 As for articulation, this wave has been really consistent with the different points, meaning that it’s all the same points we saw last time with Diana and Hippolyta. The arms feature rotating hinges in the shoulders and elbows, with swivels in the wrists. The legs have rotating hinges in the hips, swivels in the thighs, and hinges in both the knees and ankles. There’s a swivel in the waist and a ball joint in the neck. On the downside, the sculpted jacket sleeves restrict the range of motion in those shoulders just a bit. I was sort of able to get the Diana figure to cross her bracers, but that ain’t happening here. 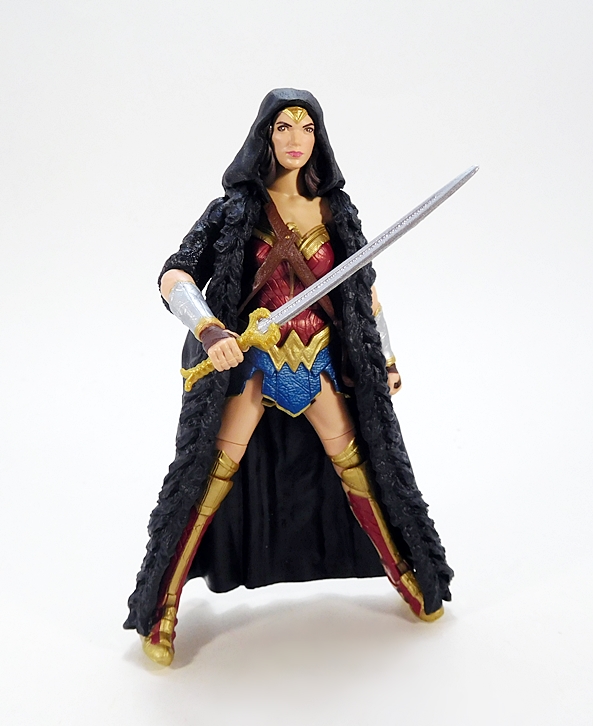 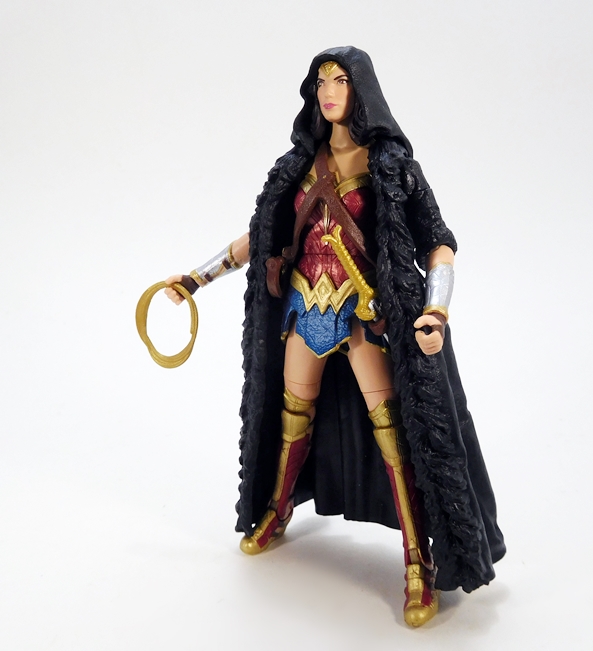 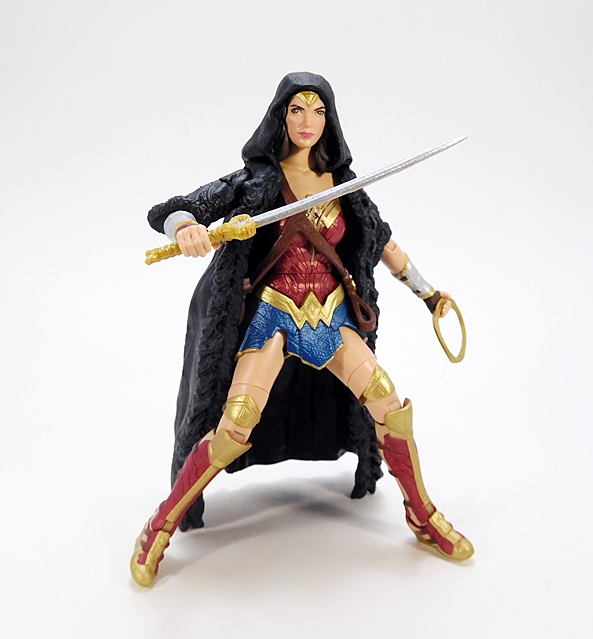 As already mentioned, Wonder Woman comes with her sword, The Godkiller, and her Lasso of Truth. The lasso is more or less the same accessory we got with Diana. The sword is similar a similar sculpt to the one bundled with Diana, but features several notable distinctions, including the pommel crossguard and blade. She can hold either accessory in either hand. 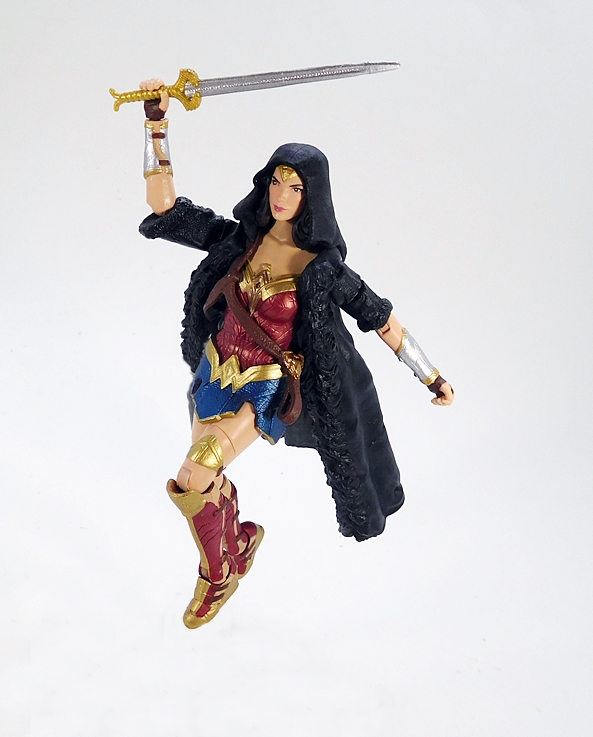 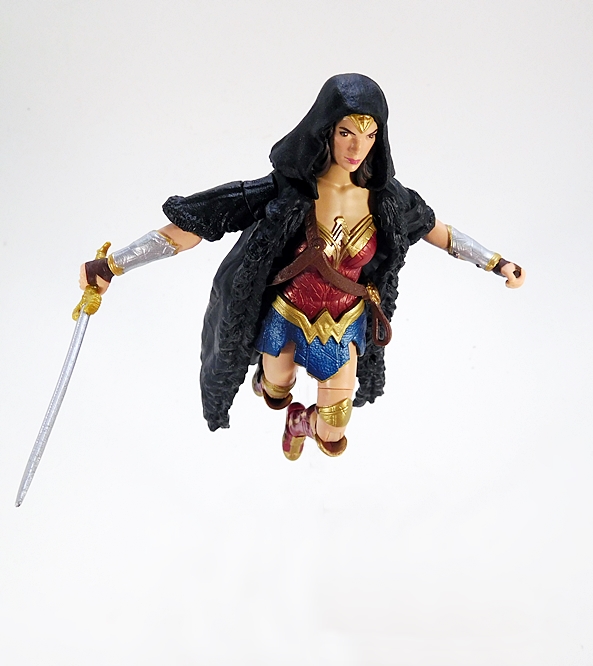 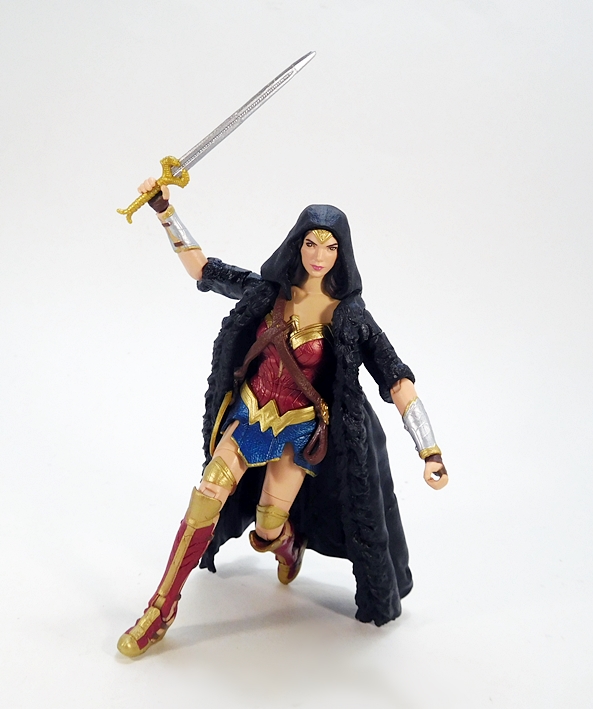 And so this wave continues to give me hope for the DC Multiverse line, where previously I had none. As I’m sure I said before, there’s still room for improvement, but compared to some of the garbage this line has churned out in past waves, figures like this one are definitely steps in the right direction. Mattel obviously invested some effort into the sculpt and paintwork, and if you want a figure of Diana that is very specific to her first solo movie, than this cloaked version definitely fits that bill. Coming up next… Steve Trevor!