The morning has slipped away and Star Wars Weekend is drawing to a close. I’ve got just a couple more updates to do, and seeing as how I did this as a lead up to The Last Jedi releasing at the end of the week, it seemed only right to squeeze one more batch of figures from the new film. Luckily, I stumbled upon a piece of the most recent wave just a few days ago with “Island Journey” Rey, General Leia, and DJ, and I snapped them up. I was hoping to get the second version of Luke in here as well, but it just wasn’t in the stars.

I’ll say once again how much I love the packaging for this line. The character art is great, the white and red deco looks clean and sharp and is no doubt a reference to the Red Dust that we see on the planet Crait in the trailers. And in just under a week these won’t be mysteries any longer! The packages also remind us that all of these figures are compatible with the Force Link device, but having had some hands-on time with one, I doubt I’ll be buying it when they hit deep clearance. OK, let’s get on with the figures, and I’m going to start with Rey! 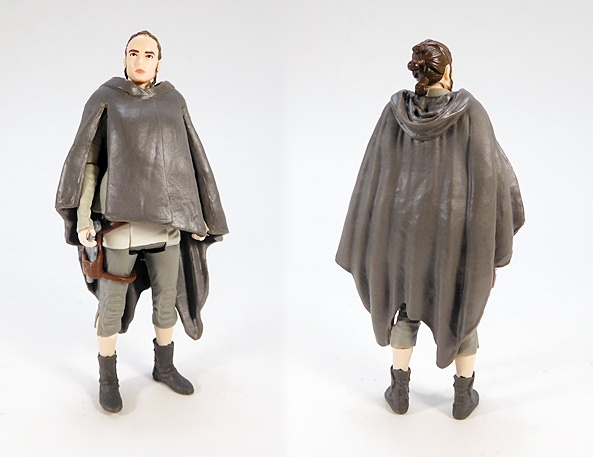 This version of Rey is dubbed “Island Journey” so it’s safe to assume she’s wearing this on the island where she finds Luke. She comes wearing a soft plastic cloak with the hood sculpted down her back. It’s more than a little bulky and none to flattering as a fashion statement. There are cut-outs so she can raise her arms while she’s wearing it. Also since the front of it ends at her belt, she can technically still sit down in it, but the back hanging down to her ankles means, she can’t wear it while sitting in a vehicle. Thankfully, this plastic garment is also removable, so let’s pop her head and see what’s going on underneath!

And we have is more or less Resistance Rey from The Force Awakens, which I just looked at a couple of reviews ago so I’ll spare you all the details again. The new deco features the pants and jacket going from tan to more of a two-tone gray, and her tunic underneath is more cream colored than light gray. Her boots have also gone from brown to gray. I’m going to go out on a limb and presume that this is meant to be the same outfit that she wore at the end of TFA, but for creative reasons, they switched up the palate on it. I actually approve of the change, because I felt it was weird how Rey would choose a new outfit that matches the coloring of her Jakku robes almost exactly. No one is that is that crazy about tan as a color. I don’t know what to tell you about the head sculpts. They keep changing them up, but they never really hit it right. 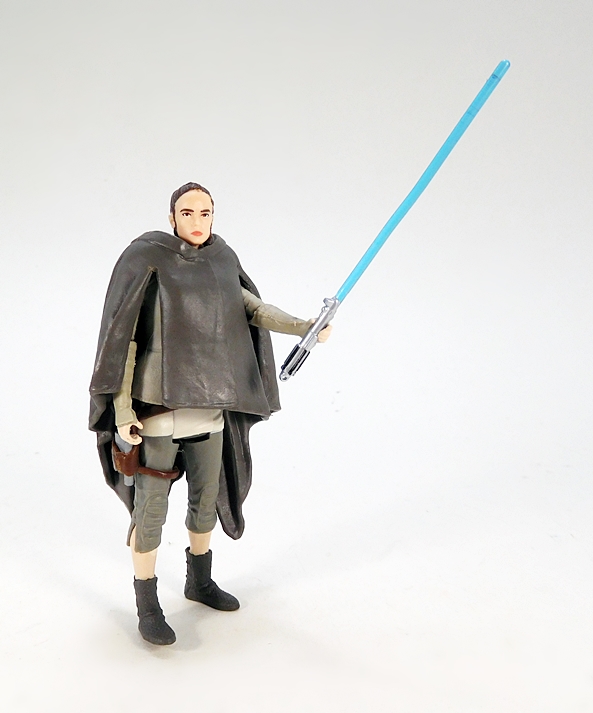 In a surprise to absolutely no one, Rey comes with her blaster and Luke’s lightsaber. The blaster is the same one that Han gave her in TFA and we’ve seen several times so far. Both Hasbro and Rey are sure getting their mileage out of that little gun! She still has a functional holster to store it in and she can also hold it in either hand. The lightsaber is the same too, with a permanently ignited blade. This version of Rey is the first figure in the line that I feel I could have skipped and not really missed out on anything. Not terrible, but not really worth hunting down, in my opinion. Truth be told, I was just so excited to find her in the wild, that I never thought twice about whether she was worth picking up. Moving on to General Leia…

I was rather surprised to find General Leia swinging on the pegs, because the distribution here often sucks and for a while everyone seemed to be hunting her. Obviously, this is not what I think of when I think of a General’s uniform, but rather stately robes that better promote her as a Princess or someone of high political importance. That having been said, it’s a pretty nice sculpt, with texturing on the outer cloak, and a little gold paint on the end of her right sleeve. I also actually think the likeness for this one is pretty good.

And the cloak is easily removable, by just slipping it off through the arm holes. Although I can’t say why I would want to do that, because it looks great on her.

Leia also comes with a blaster pistol and it looks like the design is trying to mimic the one she had in A New Hope. I’ll actually be surprised if she winds up brandishing a weapon in The Last Jedi, but like I said in an earlier review, I’m never going to quibble over getting an extra gun with my figures. Alright, let’s turn our attention to the last figure, DJ.

In a Universe of some pretty creative names, DJ is not one of my favorite Star Wars character monikers. I’ll hate it even more if he winds up actually being a DJ and that’s what they call him. Yes, this is the one of those figure based on a character that we know little about, and that’s a wonderful thing. I have such fond memories of that magical time speculating about Star Wars figures and what their characters will be like in the movie. For example, Squid Head was a high profile Rebel spy who was the centerpiece of all my old Star Wars adventures until I finally saw the movie and he was hardly in it. I didn’t even spot him at all until Return of the Jedi hit VHS and I could really scrutinize the scenes. Ah, but DJ is played by the always awesome Benicio Del Toro, so I’m sure he’ll be a character of some consequence. For now all we know is that he’s based in the City of Canto Bight on the planet Cantonica. 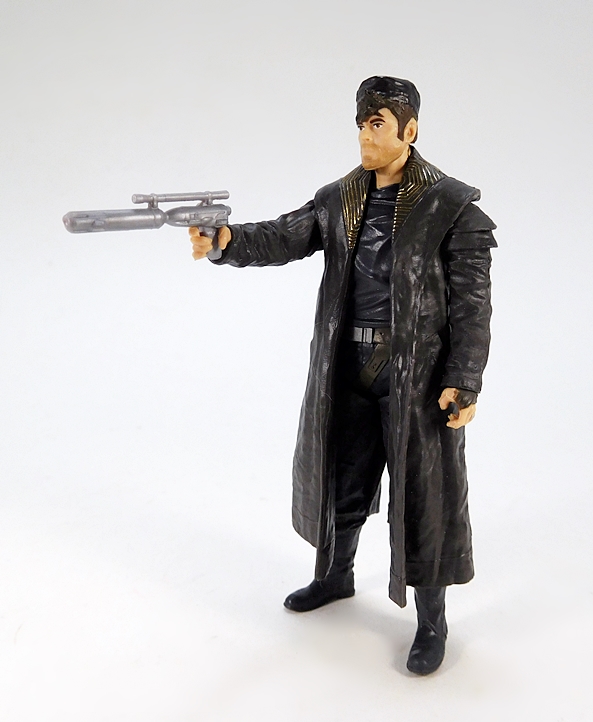 I’m talking a lot about the character because I don’t have a lot to say about the figure. He’s cool figure, but nothing outrageously exciting. He features a long trench coat with plenty of sculpted detail and some nice gold line-work on his lapels. The likeness is non-existent, but if it’s any consolation, he does come with a blaster to make up for it. Seriously, I got nothing else. I’m hoping seeing the movie will make this figure more interesting to me. 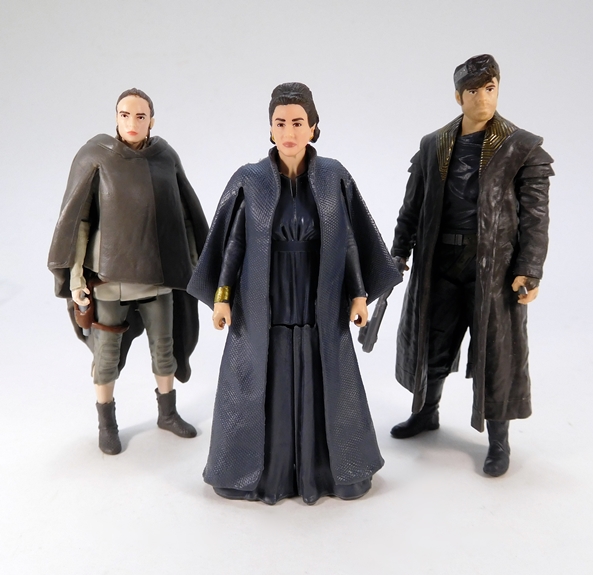 So, these are all solid figures, but so far this wave doesn’t have the wow factor of the first wave. General Leia is definitely the stand out favorite of this trio and I’m glad to see her getting a figure this time around. Did she even get one in The Force Awakens? I can’t remember, but if she did I never came across it. Second place would be a toss up between Rey and DJ and I’ll give DJ the edge just because he isn’t a repaint in a smock. I should point out here that I’ve picked up a few more figures and vehicles from The Last Jedi this weekend, so I may have to extend this to next weekend and check out some of that. Ah, but I’m getting ahead of myself, and I still have one more review to go before I can put this weekend marathon to bed.