I’ve got one more vehicle to squeeze in today and if you haven’t sensed an overpowering theme of Rogue One this weekend, then surprise… it’s from Rogue One. What can I say, other then I loved this movie and picked up a lot of the toys, not least of all this spiffy new TIE Fighter. And it felt good, because poor reviews and high prices kept me away from the X-Wing and TIE Fighter from The Force Awakens. Suffice it to say, I’ve been jonesing for a new iconic starfighter and I was hoping this was going to be it!

The TIE Striker comes in a mostly enclosed box with a little window to show off the included TIE Fighter pilot figure. You get some exciting artwork on the front showing the ship in action and plenty of pictures of the actual toy on the back. And if you didn’t notice the Nerf logo, then you should be prepared, as this is indeed one of them Nerf Ships. I actually get a kick out of the way they incorporate the Nerf gimmick into the artwork and manage to still make it look cool. The toy does require a bit of assembly, including snapping the bottom piece onto the hull and locking both wings into their sockets. And while the box is technically collector friendly, once together this ship is not really designed to come apart again, and it sure isn’t going back into the box. Let’s start with a quick look at the figure. 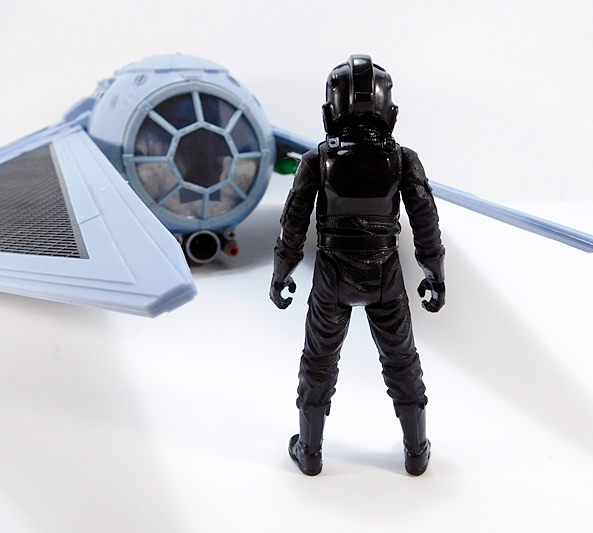 I’m tempted to just say, if you’ve seen one TIE Pilot then you’ve seen them all, but I don’t want to dismiss this figure so quickly, because it is extremely well done. The sculpt is crisp and detailed, especially the helmet and the control box. You also get some nice texturing and rumpling to the flight suit. Obviously, he’s mostly black, but you do get a mix of matte black for the suit and glossy black for the boots, gloves, helmet, and vest pieces. The paint is overall very good, particularly on the chest box and the belt. The only place this figure disappoints is that the Imperial insignia on his helmet are not even. I had a similar issue with my 6-inch Black Series AT-AT Driver and it’s pretty damn frustrating. Doubly so here, because the figure came with a vehicle, so it isn’t as easy to just pick up another one on card. 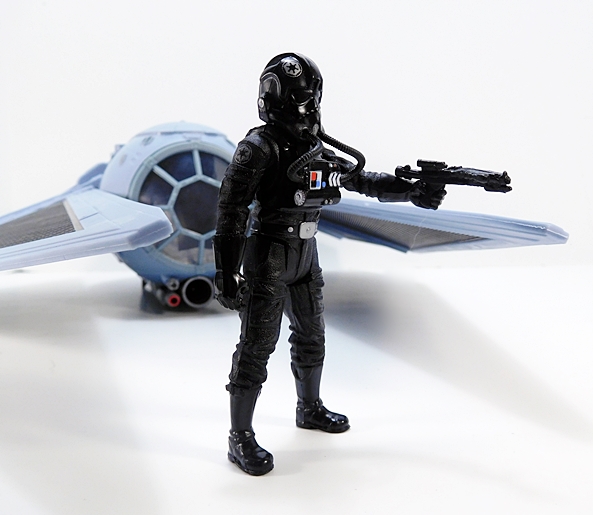 The TIE Pilot does come with a standard E-11 Blaster. He can hold it in either hand, but there’s no holster for him to put it in. That’s all I have to say about this guy. If it weren’t for the insignia slip up, he’d be absolutely perfect. Moving on to the ship itself..

The TIE Strikers are experimental fighters designed to specialize in atmospheric operations and feature two wing configurations to make them more effective at their job. The above position shows the fighter with its wings locked into the regular flight mode. I have to say that straight out of the box, I was impressed and surprised with the quality of this toy. Having handled Hasbro’s fighters from The Force Awakens and experiencing the X-Wing’s tiny size and floppy guns, and the First Order TIE Fighter’s easily warped panels, I wasn’t expecting anything decent here. As it turns out, this is TIE Fighter that can hang with the best of them. The ship has a great heft to it, and measuring at 17-inches long, it probably isn’t perfectly scaled to the 3 3/4-inch figures, but it still feels satisfyingly large. If you know what it’s like to swoosh around Hasbro’s TIE Interceptor, then you’ll have a good idea what to expect with this baby in hand. 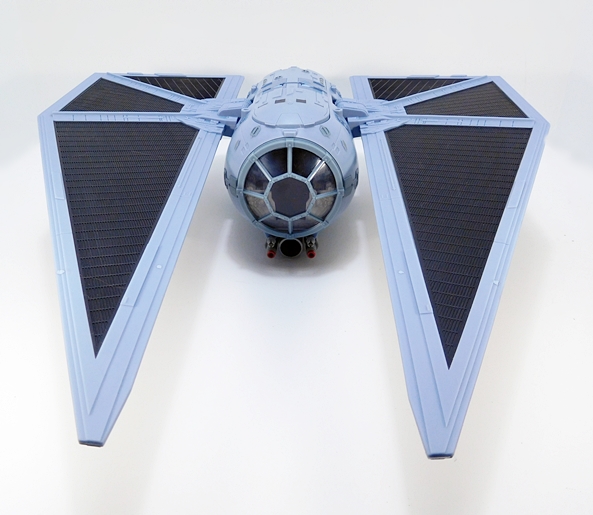 As for the sculpt and detail, you get plenty of panel lines, hatches, vents, and other bits and bobbins scattered about the hull. The wing panels feature that familiar black textured grill pattern seen on the other Hasbro TIE fighters. The wing panels do have a little flex to them, but not enough for them to warp easily, and mine came straight right out of the box. Now, if I were going to be storing this thing in a tote for a while, I’d take some precautions to make sure they lay flat, but otherwise, I don’t have any worries about wing warping. The front canopy is clear plastic with a sculpted framework.

When the wings are locked in the cruising position, all you have to do is flick the switch on the back to spring them down into the attack position. Yes, if you want to put them back up you have to do it manually. 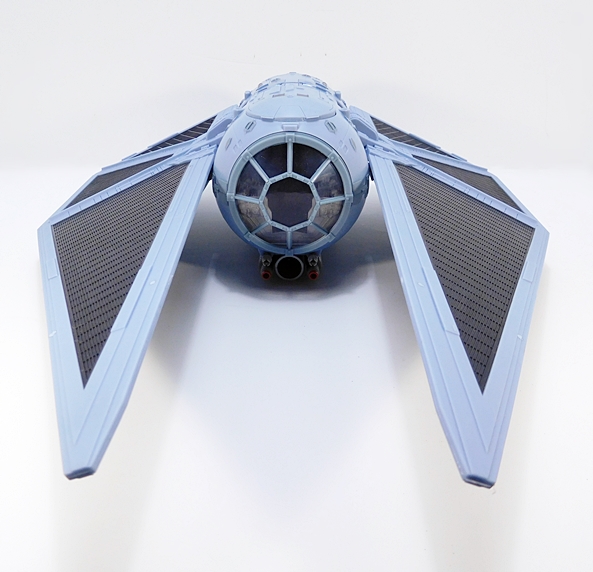 The bottom of the craft has sculpted points to make contact with the ground, so the TIE Striker can be displayed in a landed position with the wings up or down.

Despite the elongated, pill-shaped body of the hull, there’s only room for one figure in the cockpit, and I’m pretty sure these were also one-seaters in the film. The cockpit features a lot of great detail in the sculpt, including the chair and all the instruments and controls flanking the pilot on both sides. It seems like there should be a control stick or steering column or something in there, but what we got still looks pretty damn good. 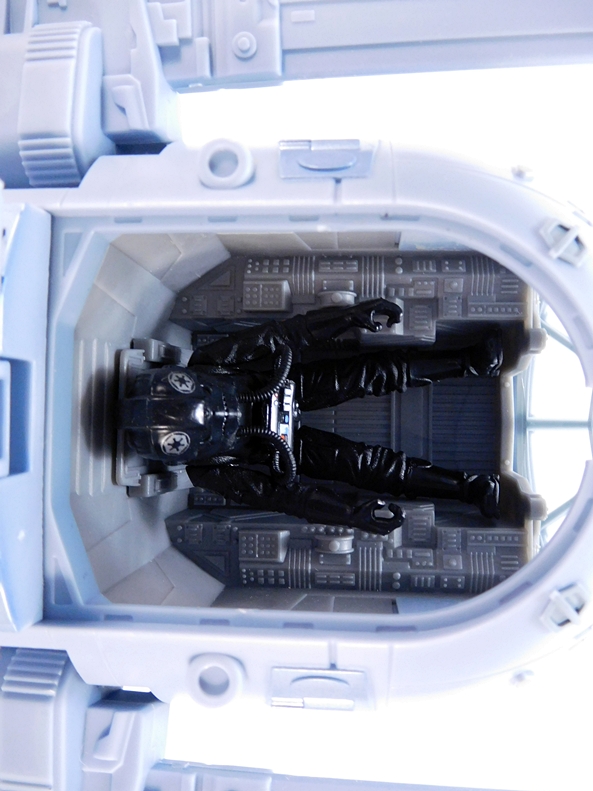 The cockpit offers plenty of room for the figure to fit in there comfortably. That may seem like a silly thing to have to point out, but I remember some of the ships from The Force Awakens had issues fitting the figures inside, and we’ll also see the same issue on at least one of The Last Jedi ships when I get around to reviewing it.  You also get a little notch on the top of the cockpit hatch to store the pilot’s gun. OK, I’ve put it off long enough… let’s flip this baby upside down and talk about Nerf! 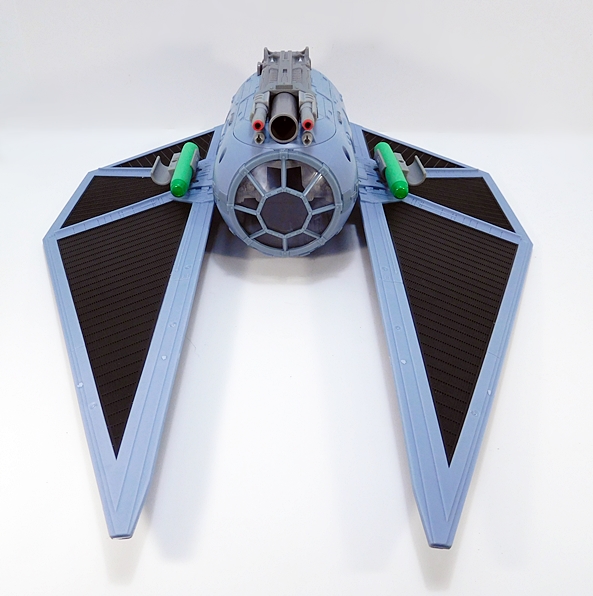 In theory, I think the concept of putting firing Nerf darts on the ships is a noble one. It definitely adds play value, and I can see it adding a lot of fun to the dynamic of swooshing these around the room and dog-fighting with another Nerf equipped fighter. But my cardinal rule of toy gimmicks has always been that the gimmick shouldn’t be a detriment to the toy itself. Easy enough… make the Nerf guns detachable, right? Well, Hasbro didn’t do that. Now with all that having been said, the Nerf gimmick does not really spoil this toy for me at all.

The Nerf cannon doesn’t look too out of place on the TIE Striker, and I can just write it off as being the Proton Bomb Launcher that’s supposed to be equipped on these fighters. Of course, you also get clips on the bottom of the wings to hold additional Nerf darts. These are a little more of an eye sore, but they still look like they could be the normal type of bomb payload you would see on a real aircraft. I actually think they look better with the Nerf darts in them acting as Proton Bombs. Would I rather they left this out? Yup. But I’m not going to let it ruin what is an otherwise lovely toy.

I seem to recall the TIE Striker originally retailed around $40-50. That seemed like crazy money, especially in light of how disappointing The Force Awakens fighters were. Now that I have it in hand, I can at least say it feels like it’s in the right ballpark, because I don’t think the TIE Interceptor was much cheaper back when it was released, and the two are quite comparable in size and quality. And whether you like it or not, you have to figure that the Nerf gimmick is upping the price a bit as well. Granted, I picked up this baby on Amazon for $16, so my sense of value is going to be a hell of a lot more favorable. The bottom line, this toy feels like a return to the quality of the good old days, and it deserves a place on the shelf with some of the better fighters that Hasbro put out over the years.

And that’s going to wrap up this 5-POA Star Wars Weekend. It felt good to get a chance to pull out all of these figures and toys and finally give them their due here on FFZ. Granted, I didn’t get to cover everything I wanted to, so I may very well be extending this thing into next weekend, but on a much smaller scale as I pick up the odds and ends that I still want to look at. But for now, I’m wiped and I still have to do a couple write ups for tomorrow’s Marvel Monday, so I’ll see y’all tomorrow.

4 comments on “Star Wars Rogue One: TIE Striker by Hasbro”