Here’s Medusa in the package and it is appropriately branded for The Inhumans. I made a vow to get through this review without once mentioning how awful The Inhumans TV Series was. But seriously, did you see that mess? Holy shit! I’m so glad they cancelled a proper MCU-based movie for that steaming pile of garbage. Maybe Disney will let a few more phases go buy before they pretend the show never happened and green-light the movie again. Or now that they own The Fantastic Four, they can just work them into that movie. What? The toy? Oh yeah… Anyway, this is actually the first one of these exclusives that I’ve seen with a sticker denoting it as such. Is that a big deal? Not to me, because this package is about to get shredded into compost. Seriously, I’m an animal when I open these things.

From the neck down, Medusa is about as straightforward a figure as they come, as virtually her entire costume is achieved through paint, and not even much of that! You get the standard shapely female buck, cast in purple plastic with metallic purple paint applications for her boots, gloves, and the collar round her neck. She features the spell/power-casting hands, and the only original sculpting here is the belt that hangs on her hips. Now keep in mind, I’m not really complaining, the costume works perfectly for the character. 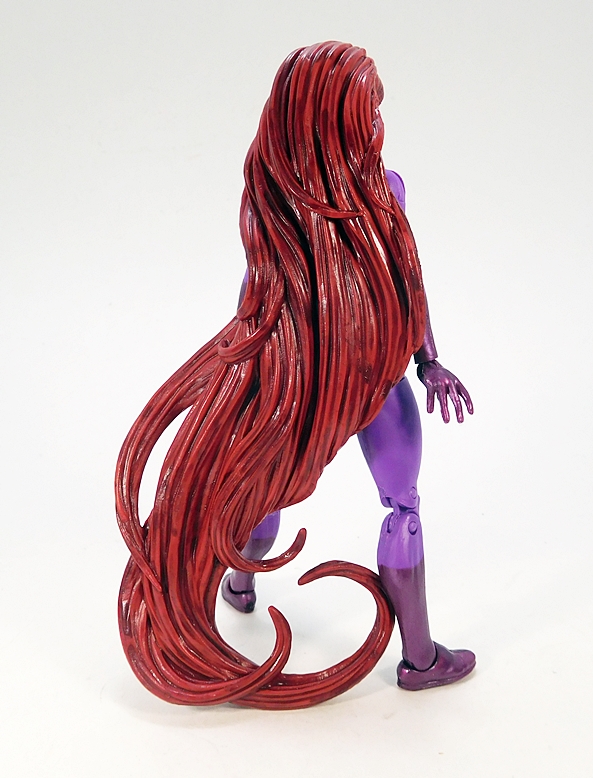 Of course, there’s plenty of new sculpting for the head, and that’s thanks to the cascade of hair that flows down her back. She’s got a pretty face with neatly painted eyes and lips. The metallic purple mask on mine is a little uneven, which is obvious on close ups, but it’s hard to tell with the figure in hand. The hair sculpt is especially well done, and that’s a good thing, since it is Medusa’s defining feature. There’s a lot of definition to the groups of strands, and I really dig the way it flows and swirls all the way to the ground.

Articulation here is the same as we’ve seen dozens of times over with this female buck. It includes rotating hinges in the shoulders, elbows, and wrists. The legs have ball jointed hips, double hinges in the knees, hinges and lateral rockers in the ankles, and swivels in the thighs. There’s a ball joint under the chest and both a hinge and ball joint in the neck. Obviously the mane of hair takes its toll on the neck articulation, but it mostly just restricts her from looking up. Some of the early pictures I saw of the figure worried me that she would always be looking down, but I’m happy to see that’s not the case it all. 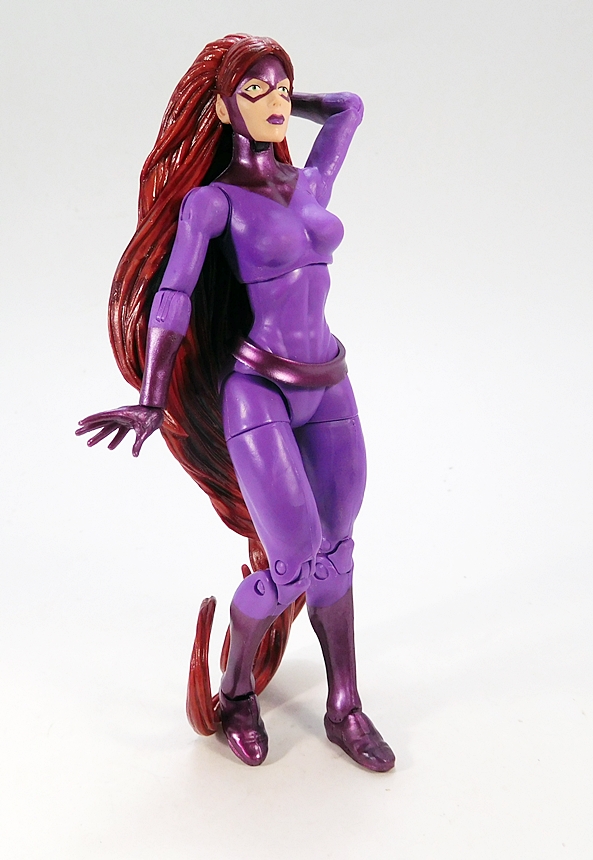 It would be fair to say that I’m not blown away by this figure, but she’s certainly a fine treatment of the character. I’m not sure if Hasbro sold the idea to Walgreens back before the TV series hit, but whatever the case, it’s nice to get a solid comic version of Medusa, especially with Black Bolt following close on her heels as part of the MCU Black Panther wave. It’s a big plus too that these exclusives seem to be pretty easy to get. Indeed, the Walgreens around the corner always has plenty on the shelf. I may have to hunt down regular Legends releases, but these exclusives are never a problem.