The Last Jedi hit theaters at the end of last week and I’ve come to the conclusion that I’ll need to see it again before I can solidify my opinions on it. Oh, I enjoyed watching some of it, but I’m still on the fence over whether it was really my cup of tea. There were a couple of cringe moments for me, I thought the structure was weird, and it didn’t feel like there was any point to a lot of it. But seeing it has at least whetted my appetite to look at some more Star Wars toys! I already did a weekend marathon of Star Wars reviews, which included a look at some of the 3 3/4-inch figures from TLJ, and today I’m opening the 3 3/4-inch scale Resistance Ski Speeder!

It may have been more accurate to call it a Rebel Ski Speeder, but maybe that’s just me nitpicking. The vehicle comes in a pretty good sized box with some exciting artwork on the front and a big advertisement for the Force Link unit. The box is mostly enclosed, except for the little window that shows off the included Poe figure. There is a little assembly required, but nothing too difficult. You just plug the mono-ski into the bottom and the stabilizer boom into the side. There are also two missiles to load into the front. There are no stickers to apply, and since the vehicle is designed to work with the Force Link, there are no batteries required either. I’ll also note that it is possible to disassemble the Speeder and get it back into the box, which is always a plus for me. Let’s talk about the figure first! 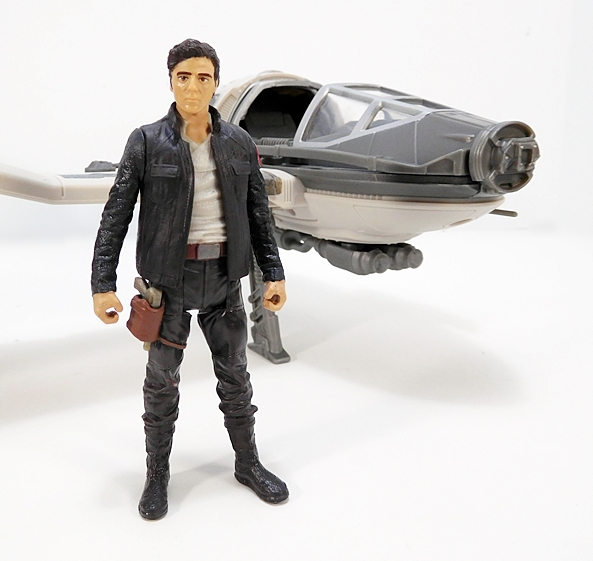 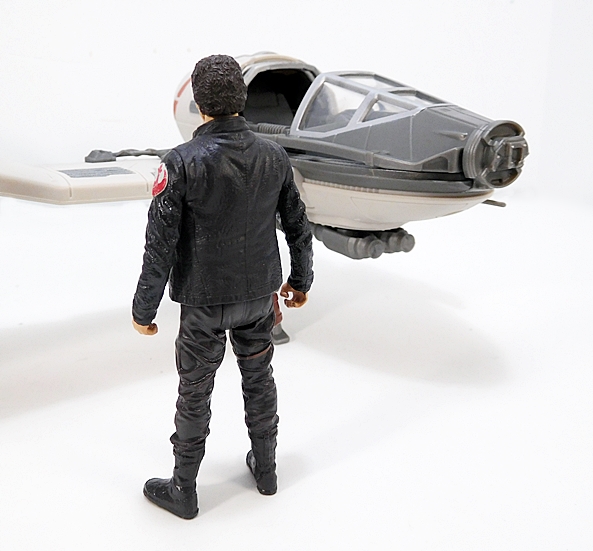 Captain Poe Dameron features the costume that he wore for most of the movie. So as great as the X-Wing Pilot version is, this one is kind of a must have too. And it also happens to be an excellent figure as well! Poe features a simple jacket, trousers and boots, with a white undershirt and a broad belt. There’s also a functional holster on his right hip with a thigh strap and a bold Resistance emblem patch on his left shoulder. When it comes to costume design, this isn’t a complex figure, but it’s a fantastic sculpt with plenty of detail and a pretty solid likeness for this scale as well. After the terrible 3 3/4-inch  X-Wing Poe from The Force Awakens, Hasbro is really doing the character justice this time around.

Poe comes with two accessories, a pistol and a communications headset. Both are cast in the same gray plastic. The headset fits him pretty well and he can hold the gun in either hand. It also fits snugly in the holster. When I get to how much I paid for this vehicle, you’ll see why it was practically worth it for this figure alone. Alright, let’s move on to the main attraction. 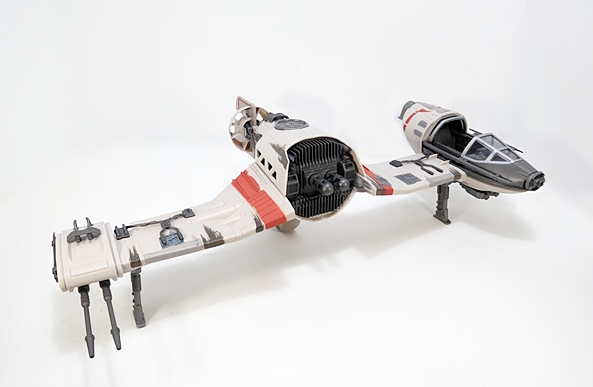 And here’s the Ski Speeder all set up and waiting for action. The Speeder has two folding sets of landing gear, which along with the retracted mono-ski, will allow it to rest on a flat surface and helps a lot for when you want to display it. Comparisons have been made between this design and the B-Wing, and there’s certainly some similarities in there. Of course, this vehicle is meant to operate only along the surface of a planet, so there’s no gyroscope in the cockpit, nor is there a fully enclosed canopy. It’s a decent sized vehicle, measuring just over 17-inches across and it has a satisfying heft to it as well. 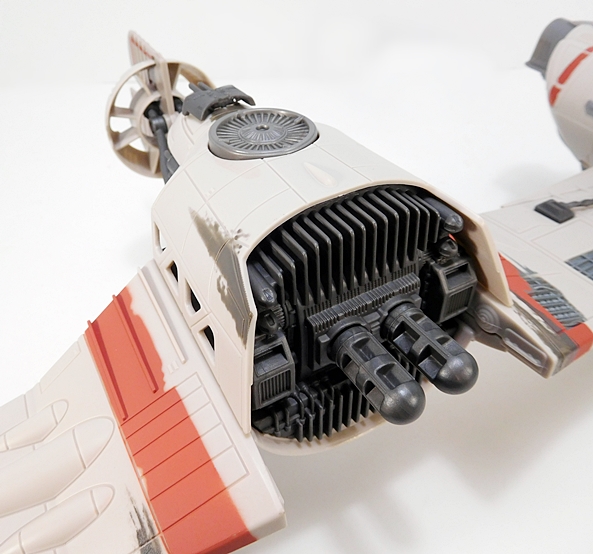 They’re is some really nice detail on display here, both sculpted directly into the hull as well as from some extra bits added on. The mid section has a dark gray plate with a grill and the back features a short, stubby tail with a circular turbine and a rudder fin. This is also where the two missiles are loaded. The mono-ski features a pistol-like grip with a trigger, so you can whoosh it around the room and pull the trigger to fire the missiles. And they do fire with a decent bit of power to them. The gray disk on top of this mid section also activates one of the other play gimmicks. By pressing it down the stabilizer boom will eject from the rest of the Speeder to simulate battle damage.

The stabilizer boom features some attached wires, pipes, and brackets all cast in dark gray. You also get two long and thin blasters protruding from the front of the end piece. The vehicle does not feature a lot of paint, but there is some dry-brushed weathering as well as some fading to the red stripes. It’s not the most realistic deco, but when combined with the two-tone gray plastic pieces, there’s at least a nice variety to the coloring here.

The cockpit section definitely features the most detail and looks really good. It looks like there’s another big blaster slung low on the outer side of this module and there’s also a very small blaster cannon, like a chin gun, that can pivot left and right. The canopy features clear plastic windows and a silver painted frame. 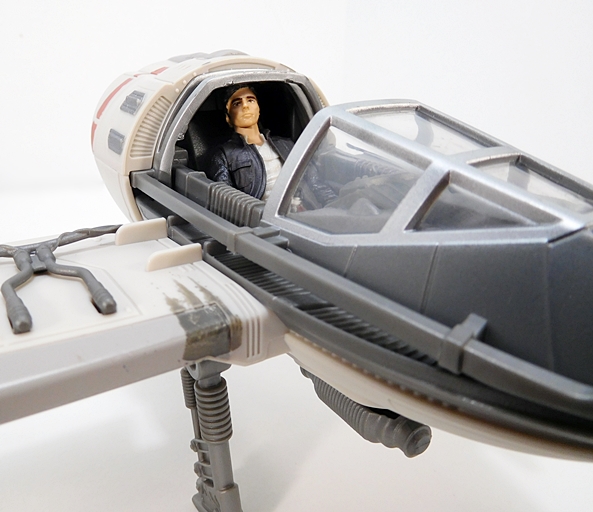 The cockpit is big enough to fit the figure, but getting his head to clear the back canopy frame is a little difficult. Or I should say that it’s getting it to clear when taking him out is the real challenge.

The mono-ski is hinged with a spring so that as soon as you lift the Speeder off it will snap down into place and drag as you skim it across the carpet, table, sofa, or any other salt laden surface. Fold up the landing gear and you’re all ready for flight! The gun-style handle is perfectly designed for play without really looking too out of place. 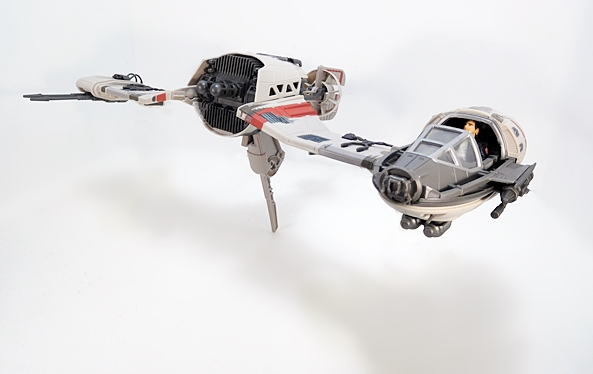 The Ski Speeder debuted with an MSRP of around $30, but it’s dropped pretty quickly and I was able to grab this one for $15. It’s a great recreation of a pretty cool and unique design, and as far as Star Wars vehicles go, that’s all everything I’m looking for. The size of the craft made it a perfect fit for Hasbro’s current price-point model, so much so that I’m 99% sure it’s the reason they were thrown into the movie, although the whole sequence was still pretty cool in its own right.  If there’s a downside to The Last Jedi and its toy potential, it’s that I don’t think we’re going to be seeing many vehicles from it. I was hoping we might get a new TIE Fighter and X-Wing, made a little better than the versions we got for The Force Awakens, but I don’t think that’s going to be the case. The Resistance bombers were damn cool designs, but probably too big for 3 3/4-inch scale. I may still pick up the A-Wing, but the Canto Bight police vessel will have to drop quite a bit before I consider it. Then again, it is the only way to get that figure. Hmmmm.