Welcome to the last review of 2017! Now, I know what you’re thinking, “What happened to the rest of the DC Multiverse Justice League Wave that you started last week?” I’ll come back to it, don’t worry. But I wanted to squeeze at least one of the new wave of DC Bombshells figures in before the end of the year, so I decided to take a detour. Also, I loved the first wave of these figures so much, I couldn’t wait any longer before opening one of these ladies. And since last week was all about Aquaman and Mera, let’s keep the ball rolling with Bombshells Mera!

If you’ve purchased any DC Collectibles figures in the last year or so, this packaging should be familiar. It’s more or less the same style used for the first wave of Bombshells, as well as the DCTV figures, and the other Designer Series releases. It’s not the most exciting presentation out there, but I do like it a lot. The large wrap-around window offers a great look at the figure inside and the design is clean, simple, and the box is collector friendly. It also features character art on the side panel so you can line them up on a shelf and each character is numbered, with Mera being #7 in the series. Let’s get her out of her aquarium and check her out! 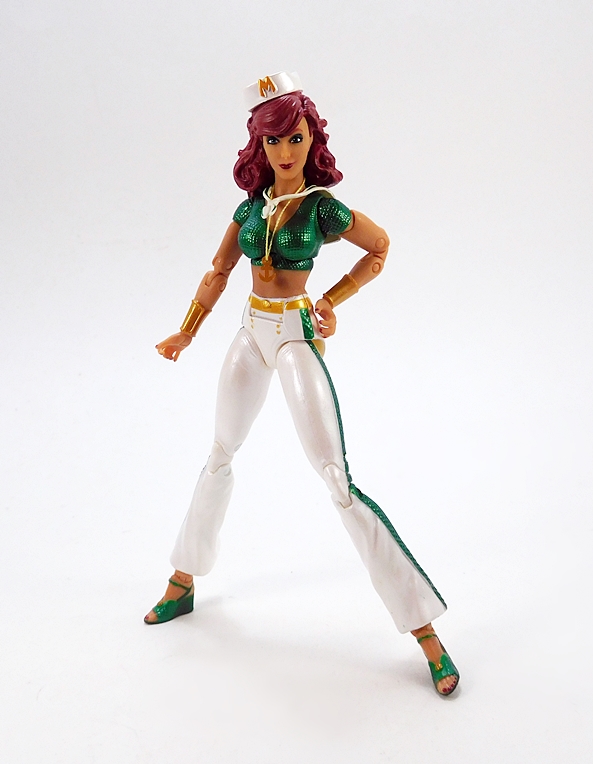 Wow, this figure looks great! But before I start gushing, I’ve got to report that her left foot broke off at the ankle just from being taken out of the tray. What the hell, DC Collectibles? You’ve been doing a lot better with this kind of QC stuff, but clearly you haven’t slain all your demons yet. I was easily able to glue it back on, but obviously at a cost to that ankle’s articulation. Of all the places the figure could break, that was probably the best scenario, but it’s still unacceptable to have it happen simply by removing the figure from the tray. We’re not off to a good start, but let’s see if Mera can redeem herself.

The Bombshell makeover puts Mera in a vintage style sailor outfit, which is very appropriate for this Chickie of the Sea. Her cut-off top is sculpted to resemble the scale armor she’s often depicted as wearing, and painted with a beautiful metallic green. She also has a sailor pearlescent white sailor scarf with a green stripe and a golden anchor pendant hanging around her neck by a string. I thought that was a really nice touch. 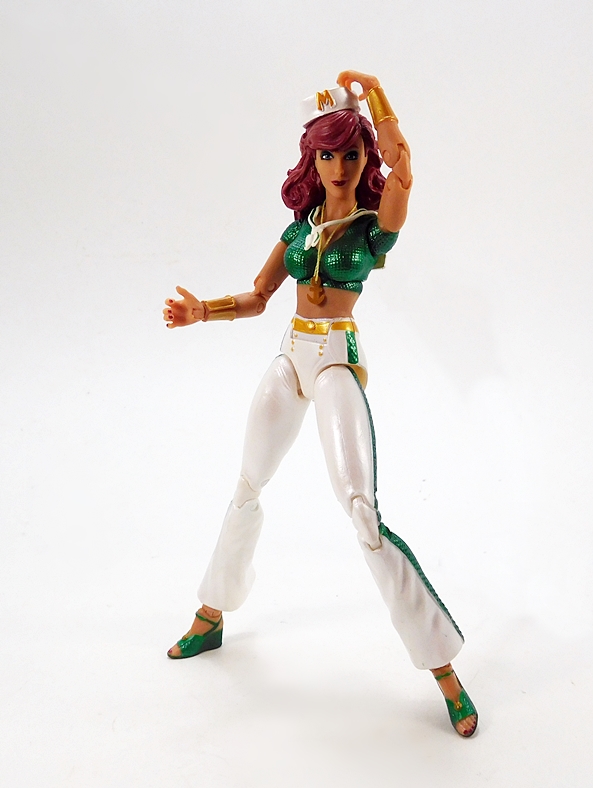 Below her exposed midriff, she sports a pair of pearlescent white flared slacks with green scaled stripes and a gold belt, as well as a pair of shoes sculpted and painted to match her top with the same green scales. The outfit is rounded out with a pair of gold wrist bracers and a chic white sailor’s cap with a gold “M” on the front. Both the sculpt and coloring on the outfit are top notch, making this one great looking figure. You also get some really nice subtle paint applications like the gold on her shoes and the red nail polish on her fingers and toes.

The portrait is no slouch either. Mera sports a pretty face with some clean paint apps for the eyes and mouth. She also has a copious coif of red hair done up in vintage 40’s style. I’ll note here that I really like the matte plastic that DCC uses for the skin tones on these figures. It looks appropriately warm and soft and much better than the usual paint we sometimes see on some of the other companies’ 6-inch scale figures. 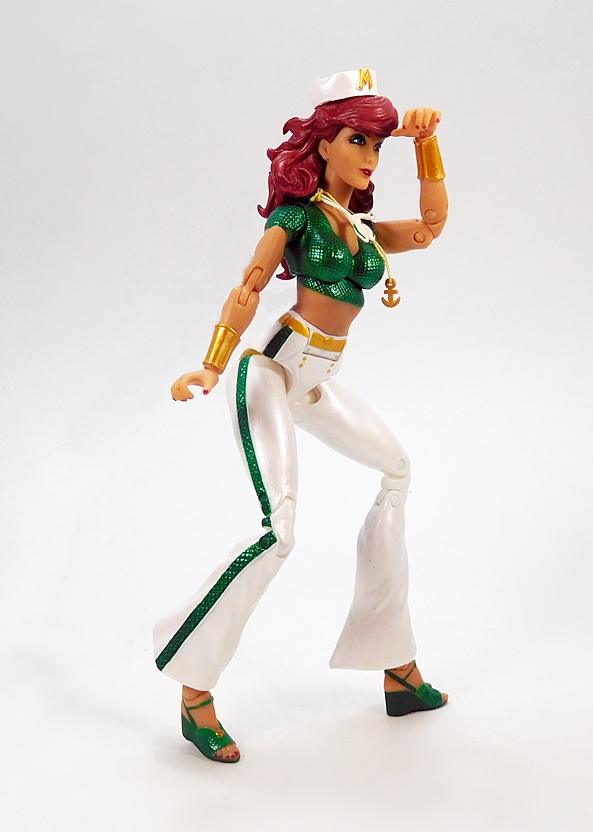 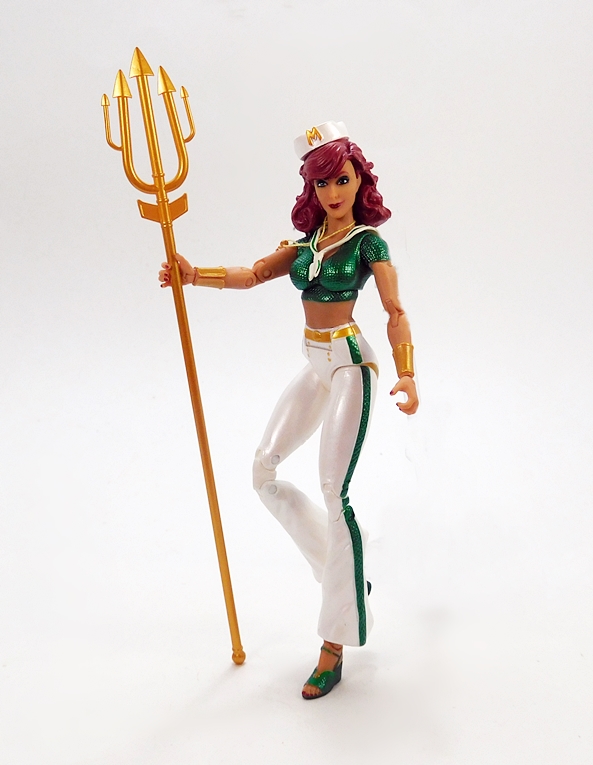 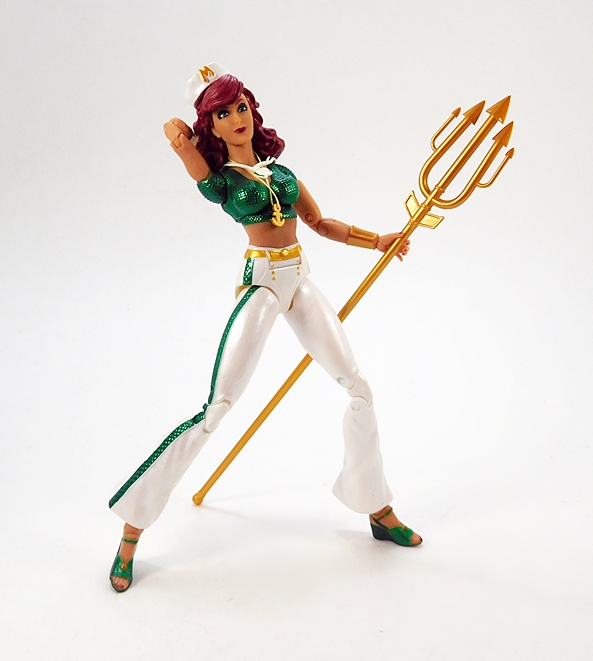 And you know what else is missing? Almost all the extras. The first wave of figures all came with multiple pairs of hands and in most cases multiple accessories, which really added to the fun factor. Mera comes with no extra hands and just one accessory: Her trident. Cutting the extra hands here is particularly egregious because the ones she comes with don’t really hold her trident well at all. I would have really liked some fists, relaxed hands, maybe a saluting hand. It sucks when a company sets expectations for an initial wave of figures and then lowers the bar for the follow up. And while I won’t swear by it, I’m pretty sure the promo images for this wave showed extra hands. 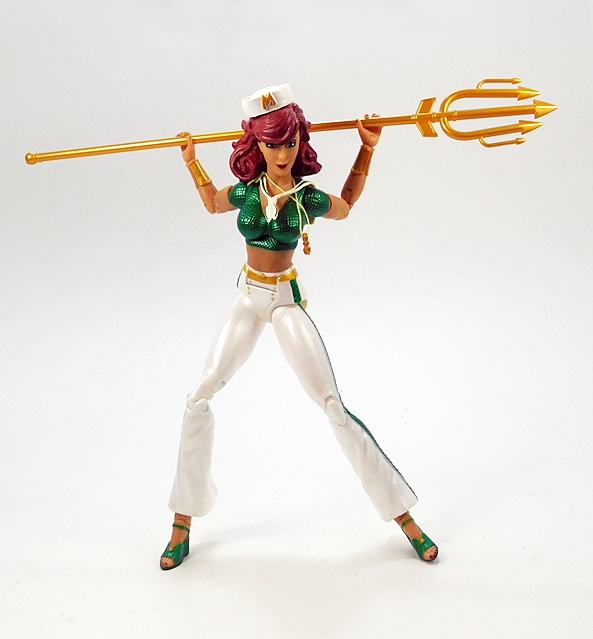 The trident is a welcome accessory, although it is fairly simple though. It’s cast in a rich gold plastic.

With how amazing the first wave of Bombshells figures was, I did not expect Wave 2 to begin with disappointment, but that’s the word that best comes to mind. Now, to be clear: Mera is a beautiful figure with a terrific sculpt and some great paintwork, but with breakage right out of the box and cutbacks in both the articulation and the accessories, I’m sad to see this line is not dedicated to living up to the standards set by the initial four offerings. Am I sorry I picked up the second wave? Nope. I love these designs, and I’m happy to get the opportunity to add them to my collection as action figures. But that doesn’t change the bitter feeling of the cutbacks. The irony is that I actually picked this figure to review today because I wanted to end the year with a sure thing, and it kind of backfired on me. Granted, it’s possible that the only way DC Collectibles could go through with a second wave of Bombshells figures was to cut costs, but from what I’ve seen the first wave seemed to have sold rather well.

And that’s a wrap for me and 2017! Next week will be gobbled up by the canned content of my Annual Favorites & Disappointments lists, which I’ll be wrapping up and scheduling over the weekend. FFZ will then go on autopilot, but I’ll most definitely be around to reply to comments. Thanks, Toyhounds! I’ll see you on the other side!