It’s time for another Transformers Thursday fueled by the Power of the Primes! If you’ve been following along with my previous PotP reviews than you already know that this line has been a little hit and miss with me. But one thing it’s doing pretty damn well is the Legends Class figures, so let’s check out another one today. And if it isn’t an honest to Primus homage to G1 Beachcomber! “Ooooh, my. Booboobadooboo… this is gonna be paradise!” 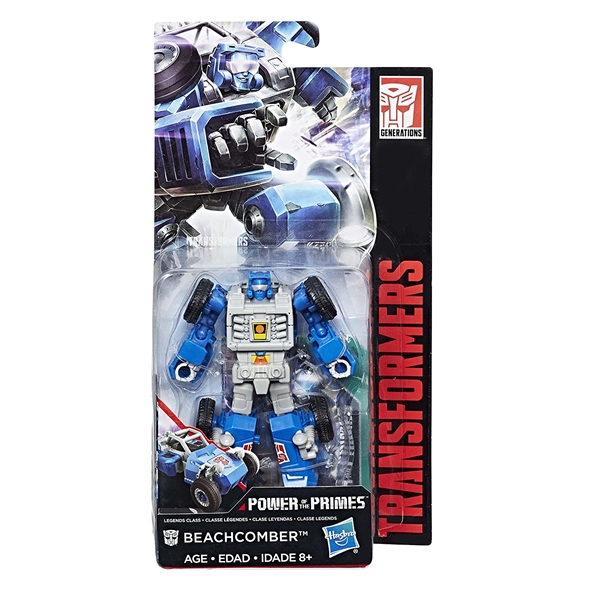 Everyone’s favorite Cybertronian Tree Hugger comes on your typical PotP card with some truly bitchin’ character art at the top. As far as I know, the last time Beachcomber got a figure was back in the Generations line around 2008. That one was also a Legends Class, but I only owned the repaint, Sandstorm. In fact, the last Beachcomber figure I owned was that giant futuristic dune-buggy from the Energon line. Needless to say, I was pretty excited to get this figure in hand. He comes packaged in his robot mode, but as usual, let’s start with his alt mode. 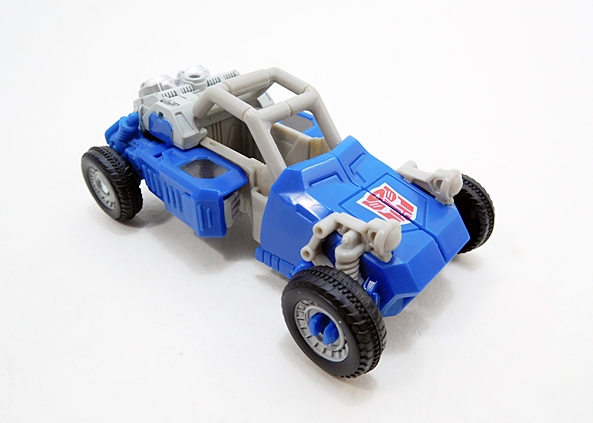 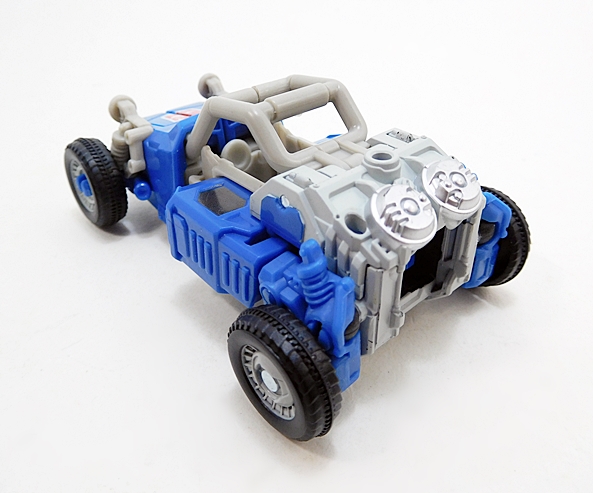 And it is indeed a good old fashioned blue and gray dune-buggy! There’s just the right amount of detail in the sculpt, which includes shock absorbers on the front and back wheels, headlamps, and some panel lines and further detailing on the running boards. You also get a little basic detail in the driver compartment, and some great looking treads on the plastic tires. The coloring is largely achieved through the blue and gray plastic, although the back engine area is painted gray and the two circular components are painted silver. There’s also a nice big Autobot emblem printed on the hood and bisected by the seam. I’ll admit that a few more paint hits would have been welcome, like some yellow on the headlamps and maybe some black for the driver cage, but I’m still pretty pleased with this little buggy. 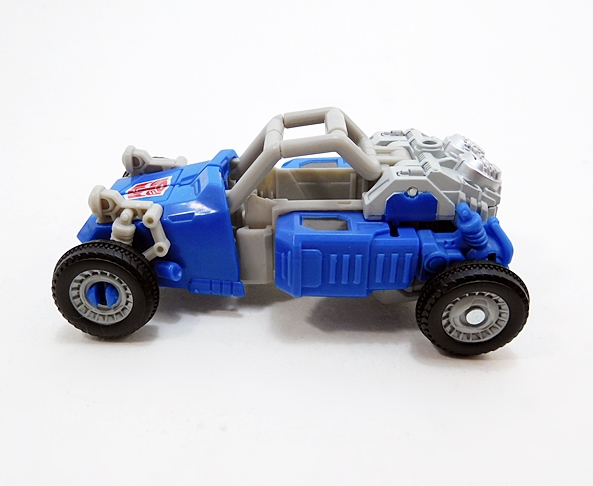 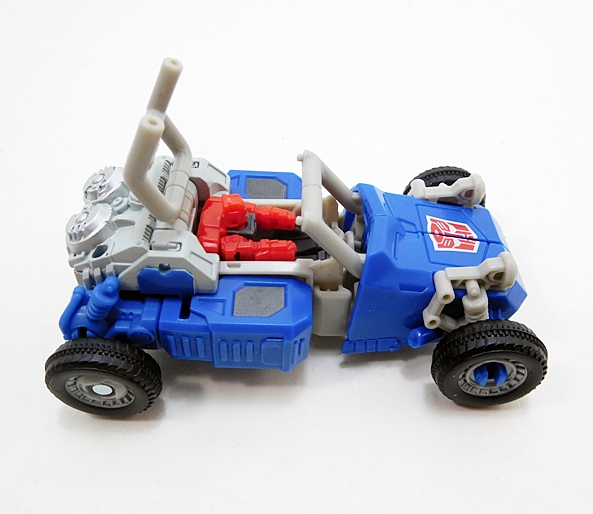 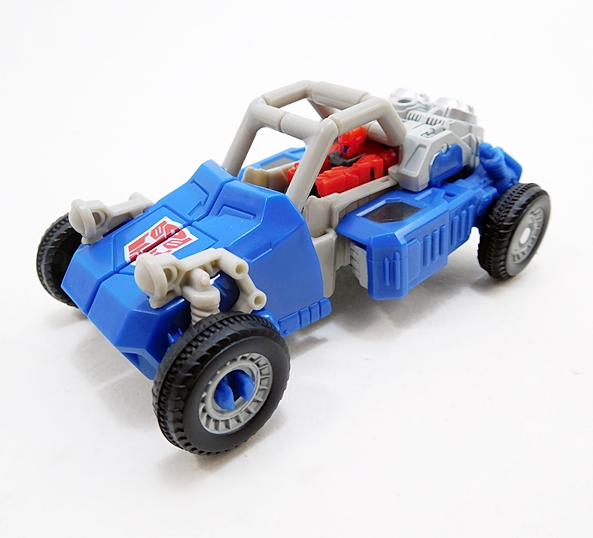 As with most of the Legends Class vehicles lately, you can fit a Titan or Prime Master into the driver seat, in this case simply by disconnecting the bars to the driver cage and angling them back. 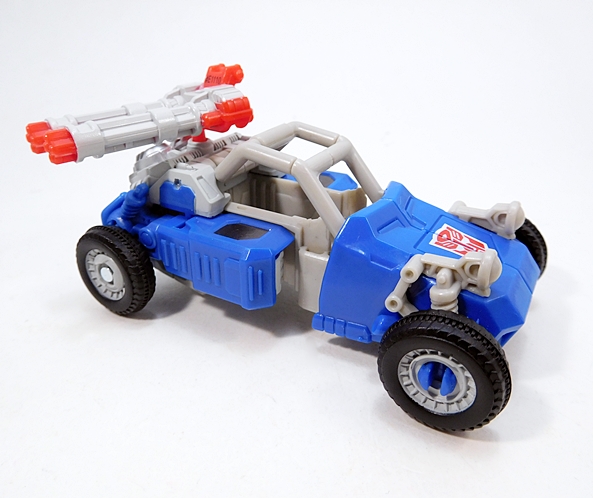 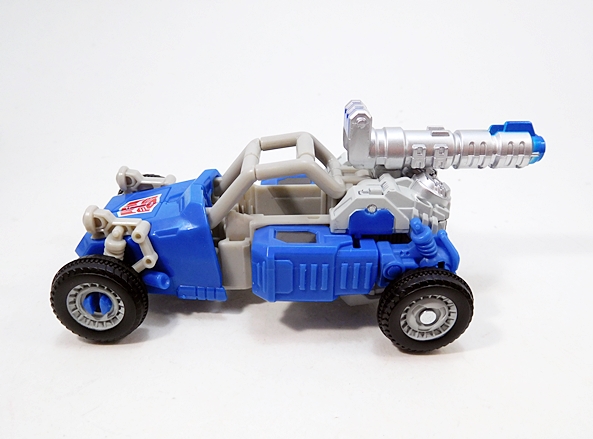 It’s also worth noting that the socket near the engine area can fit the weapons from the Prime Masters’ Decoy Armor. It may be a little odd to see the peace-loving Beachcomber toting around extra firepower, but somebody’s gotta save that pristine Golden Lagoon from the Decepticreeps! 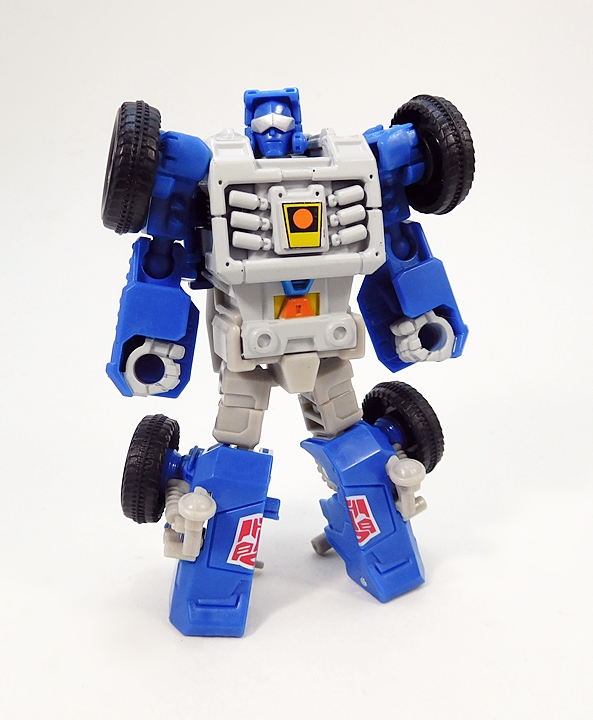 Beachcomber transforms pretty much exactly like the old days. The legs fold out from his hood and the arms pull out from the sides. Compact the torso and you get your head reveal, and the results are superb! You get the same wheel placement on the shoulders and lower legs, a sticker on the chest similar to the original toy, and some blue, yellow, and orange paint on his abs to match the other sticker on the original. I also really dig the sculpted piston design in his chest. Some additional gray paint is used to pick out his fists. This guy looks absolutely amazing. 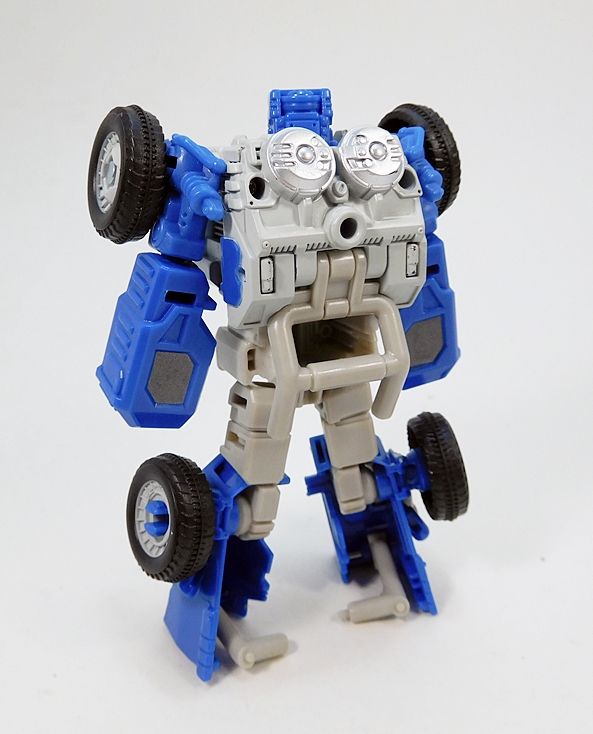 He looks damn spiffy from the back as well. Sure, you get a little of that hollow leg syndrome, but I’m willing to accept that in these Legends Class figures. I love how two of the cage bars form heel spurs, and the rest of the cage folds neatly down and close to his back. The positioning of the two silver drums on his upper back looks great as well. 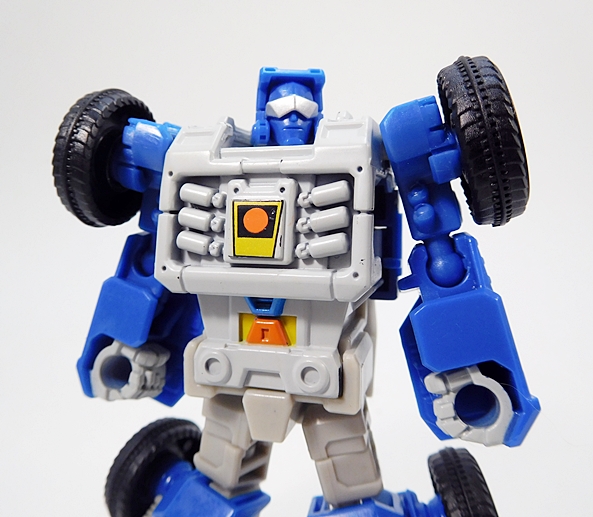 The only thing this figure needs to round out the homage was a great head sculpt, and he’s got that too. The pronounced silver visor rests above a pretty human-looking face, which matches his Sunbow design spot-on. I can practically see him pursing his lips and whistling to the birds! 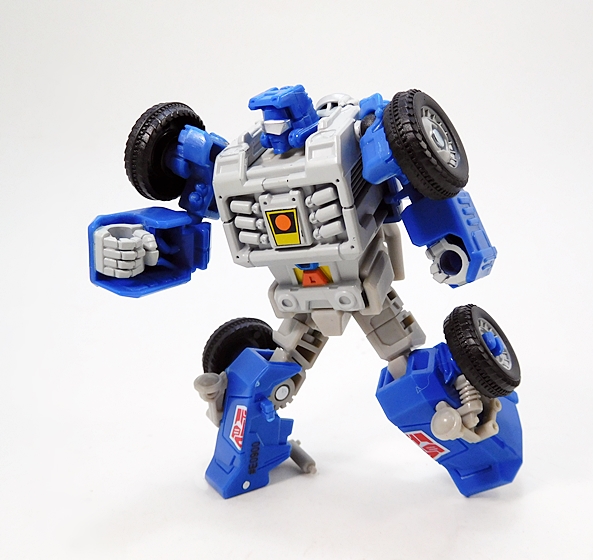 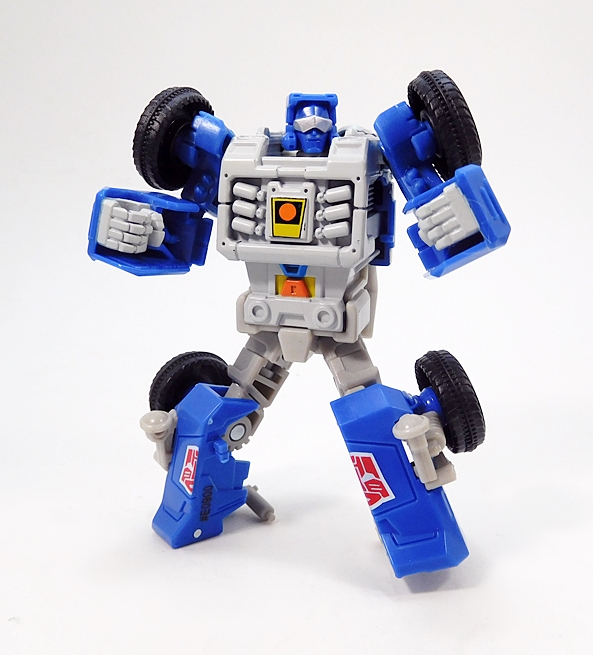 The articulation here is pretty much what I’ve come to expect from these Legends Class figures. That includes ball joints in the shoulders, elbows, and hips, hinges in the knees, a ball joint in the neck, and much to my surprise, this little guy actually has swivels in the thighs! 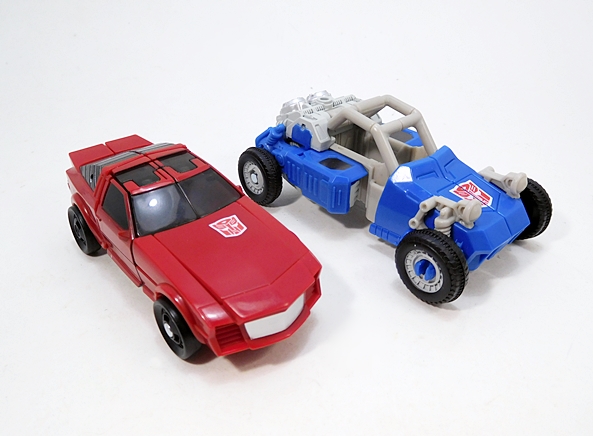 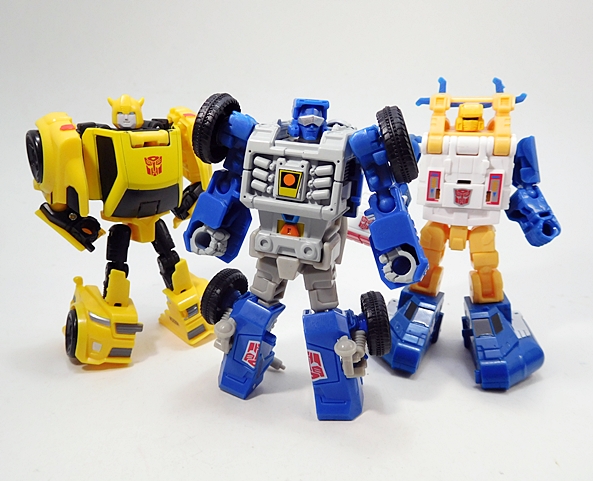 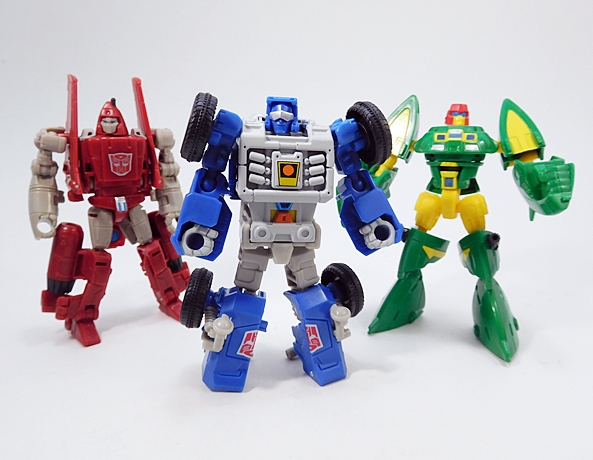 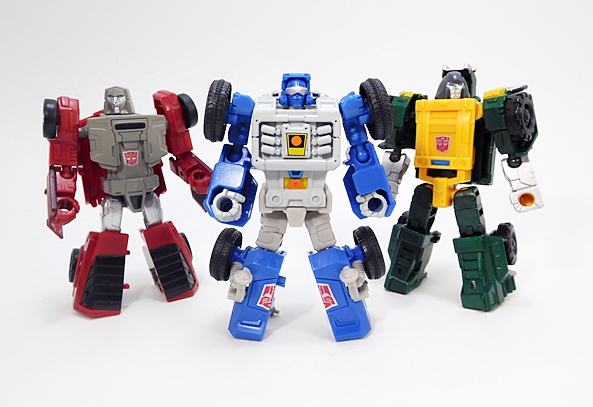 Beachcomber fits right at home among some of the more amazing Legends Class G1-homages we’ve been getting in the Titans Return and now the Power of the Primes runs. Everything about these little fellas make me smile, but Beachcomber scratches that special itch, because this really is the first decent official version of him we’ve had in ten years, and even that one wasn’t all that amazing. Part of me would still have liked to see these guys get the Deluxe treatment, but then there’s something so appropriate about the old Minibots getting to keep their smaller and simpler stature. Either way, there’s no doubt in my mind that Windcharger and Beachcomber rank in as my two favorites of the PotP lines so far.

One comment on “Transformers “Power of the Primes:” Legends Class Beachcomber by Hasbro”