It’s DC Friday again, and after a few detours it’s time to get back to checking out the second wave of DC Collectibles’ Bombshells figures. If you’re just joining me, these are action figures based on the original statue designs DCC has been putting out for the last couple years. The DC Bombshells have become super popular and have not only spawned merchandise from other companies, but also their own comic book series. I absolutely adored the first wave of these figures, but the first figure I reviewed from this new wave, Mera, left me a little cold thanks to cutbacks in accessories and articulation, not to mention a joint breaking right out of the box. Let’s press on and see how Hawkgirl turned out.

There’s really nothing new to say about the packaging. This is the same style box we’ve seen across most of DCC’s Designer Series figures with the angled edge on the window and some nice character art on the side panel along with the figure’s number in the series, in this case Hawkgirl is #6. The presentation here is nice and clean, and everything is collector friendly, but I can’t help but notice a lot of empty space on that tray. Uh oh… looks like the accessory cut-backs continue!

And here’s Hawkgirl out of the box! I’m not sure exactly what they were going for here in terms of design. That famous first jetpack flight of the Bell Rocket Belt was in the early 60’s so it’s a little too late for the Bombshell’s era. I’m going to go with a vintage Buck Rogers or maybe a Rocketeer kind of vibe. Whatever the case, I like this design a lot and I came damn close to buying the statue even after I had sworn off collecting them because of lack of display space.

Hawkgirl features a green jumpsuit, with the top unzipped and hanging down around her waist and legs, exposing her rather tight yellow tank top. The lower half of the jumpsuit effect is achieved simply with paint, while the top half is sculpted separately and attached to look like it’s hanging off of her. She also wears a pair of long gloves and tall brown boots with yellow trim and sculpted and painted laces. Some nice little touches include the subtle wing motifs etched into her boots and the elastic cuffs on the loose, hanging sleeves of the jumpsuit. The paint on this figure is pretty solid, but then that’s been the case for this line from the beginning. Granted, there isn’t a whole lot of complex brush work going on here, but the yellow on the boots is pretty sharp, as are the stripes on the legs, and they even painted the buckles on the boot straps with a little gold paint. Likewise, the tiny buckles on her shoulder straps are painted silver, and the silver on the helmet looks great. There is a stray spot of red paint on her nose, but otherwise no complaints here. 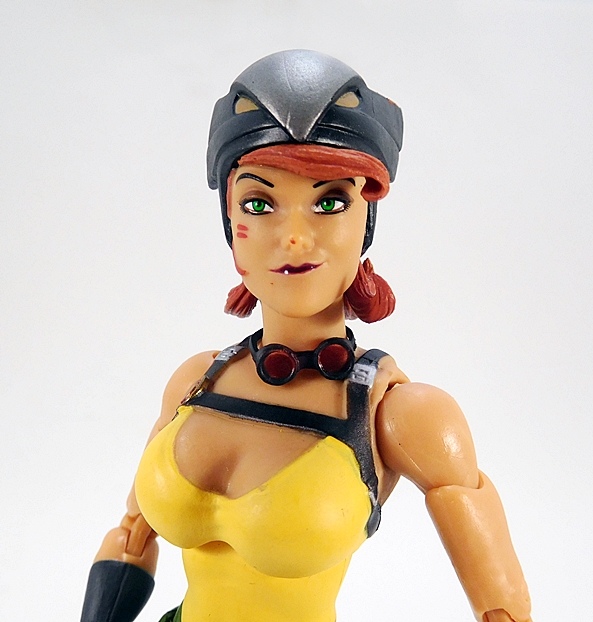 I really dig the portrait here a lot. Hawkgirl is wearing a wry smirk that gives her a lot of personality. She wears a very familiar hawk-styled helmet, and they did a nice job sculpting the patches of her red hair that spill out from under the tight-fitting helmet. She has a loose pair of goggles hanging around her neck, and the shoulder straps for the jetpack rig are part of the sculpt, so they’re present whether she’s wearing the pack or not. I do wish they could have worked out a way to make her blowing a bubble an option, as that was such a distinctive aspect of the statue, but I guess it wasn’t to be. Before we talk articulation, let’s get her suited up to fly! 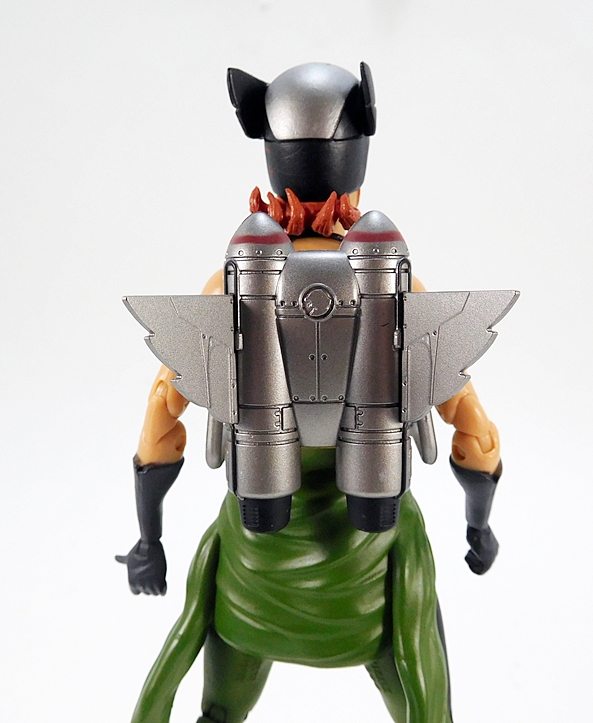 I already griped about the accessory cut-backs being a trend in this second wave of Bombshells, and yes the jetpack is the only accessory included here. Gone are the extra hands and various extra bits of fun. In the case of Hawkgirl, I’m almost willing to look past it, because the jetpack uses a little more plastic than your average accessory. It attaches simply to her back via two pegs, but getting the control arms into her hands is a little scary because they are pretty fragile. The pack itself looks pretty good. It has an appropriately retro design with some sculpted panel lines and a pair of wings to follow through on the Hawkgirl theme. There are some red rings painted on the twin cones and the thrusters are painted black. The control arms feature painted wire snaking around them, and the hand grips have red thrust buttons on the tops.

The articulation is overall pretty good, especially when you consider some of DCC’s other offerings. The arms feature rotating hinges in the shoulders and wrists, swivels in the biceps, and double hinges in the elbows. The legs are ball jointed at the hips and double hinged at the knees. The ankles have both hinges and lateral rockers. There’s an ab crunch hinge, but it’s all the way down near the waist, and also a ball joint just under her chest. Finally, the neck is ball jointed. I do still miss the swivels in the thighs, and while I appreciate the torso articulation, you still can’t get her in a decent flying position where she’s looking up, but she can do some pretty good hovering poses. Also, while it’s a shame I have to mention it as a plus, I was happy not to have any joint snapping issues here. All of Hawkgirl’s articulation was smooth right out of the package.

After a dodgy start with Mera, Hawkgirl here goes a long way to rekindle my hope for this second wave. Sure, removing the thigh swivels still pisses me off, and even with the jetpack, I would have still liked a few more extras in the box. I can’t help but think that if this figure shipped in the first wave, she would have had an extra pair of hands, maybe an alternate bubble-blowing head, or at least some effect parts for her jetpack. That having been said, she’s still a lot of fun to play with and I was happy to not have any QC issues with this one. But best of all, I can finally stop feeling remorse over not picking up the statue, because at least now I have Bombshells Hawkgirl  in my collection as an action figure.