It feels like forever ago that I wrapped up the Gladiator Hulk Wave of Marvel Legends, but I took a few detours afterwards and now I’m ready to jump back in to a new assortment. With Black Panther hitting theaters soon, I was really tempted to dig into the Okoye Wave, but then I thought it would be more fun to look at those figures after having seen the film. So let’s go back in time to last year and kick off the Man-Thing Wave with Daredevil from the Netflix Series! 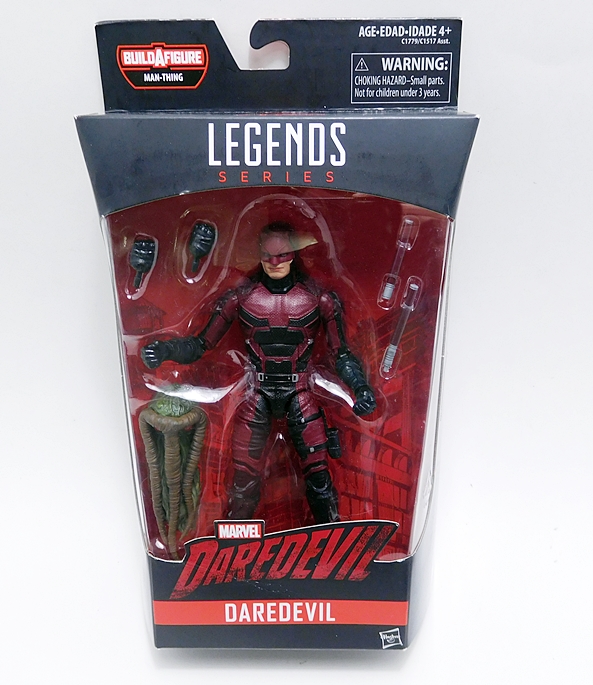 While Man-Thing and a couple other figures may have little to do with it, this majority of this wave, four figures to be exact, belongs to the various Netflix Marvel series. And really, I can’t express enough how happy I am to see these versions of the characters getting immortalized in 6-inch plastic form, because now they can co-exist on my shelf alongside their MCU allies. I’m kicking things off with Daredevil because his was the first series, and he remains my favorite character among the Netflix Defenders. Plus, after already reviewing the Hot Toys version, I’m super curious to see how Hasbro’s smaller version turned out.

While it’s sometimes hard to tell on screen, The Daredevil suit offers plenty of opportunities for detail, and Hasbro really stepped up here. The black and red areas are clearly distinguished by sculpted lines and the texturing is quite well done. There’s a really great sense of layering that makes the suit look almost convincing enough to be made of separate pieces laid onto the buck. The scalloped motif on the forearms and lower legs look great and you get some nice sculpted detail in the boot laces and even the stitching in the gloves. Neat silver paint hits punctuate the various buckles and catches and I like the use of both matte and gloss black. It really looks like Hasbro did their research when sculpting this guy and poured a lot of love into him. Truth be told, I’d like to see a little less black used on the design, but that might be something the creative team is saving for Season 3. 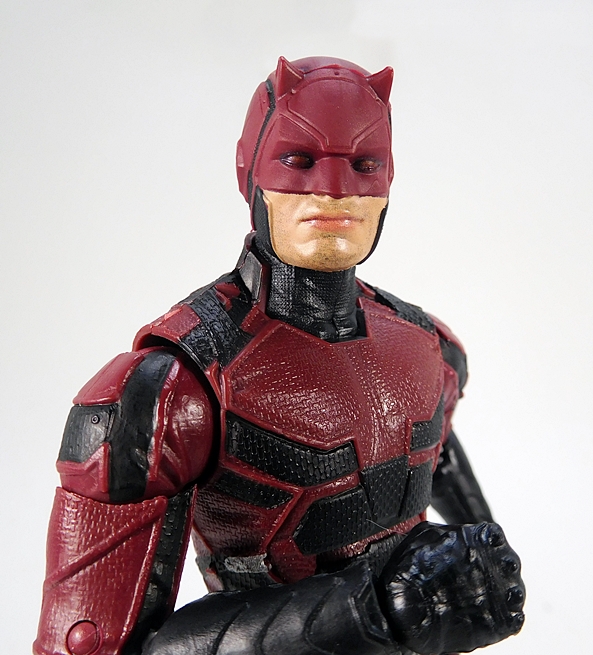 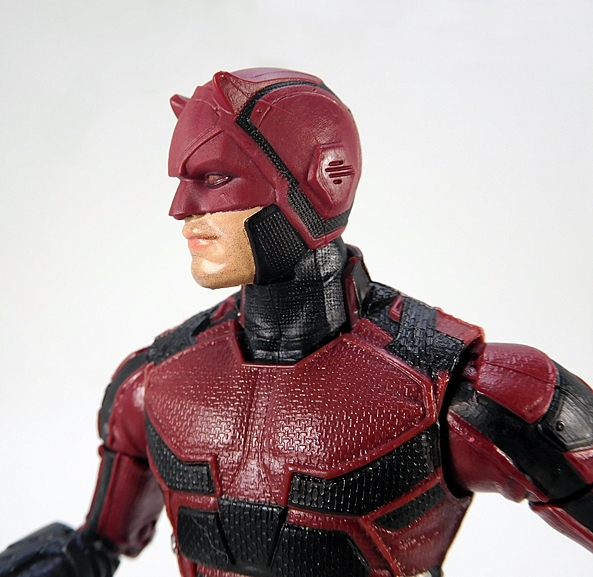 The head sculpt is solid is a bit more of a mixed bag for me. I think the mask looks every bit as good as the rest of the costume. You get more of that great texturing on the neck as well as the exposed black mesh areas between the helmet. The contours of the mask and horns are fantastic and I really dig that they put the little slits in over the ears. They even used a little gloss for the eyes to reproduce the creepy reflective effect they give off in the show. If the portrait stumbles a bit, it’s in the lower half of Matt Murdock’s face. I really don’t see a lot of resemblance there and the paint lines between the skin and the mask on mine aren’t as crisp as I would have liked. Granted, it’s challenging enough to do a good likeness in this scale and price point, and I imagine it’s doubly so when just doing the bottom part of the face. Still, I think what we got is solid, and I don’t want to pick at it too much.

Daredevil includes a set of holsters for his batons, and it isn’t lost on me that these actually work better than the ones on the Hot Toys figure. There they were too snug to insert the batons, but here they fit great and are easily removed. The batons themselves can be connected together into one longer truncheon via a peg. You also get two pairs of hands: One set of fists and one set to hold the batons. 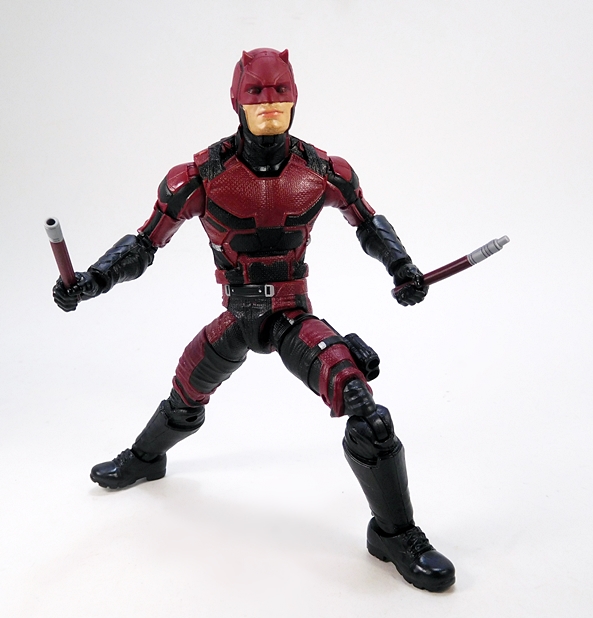 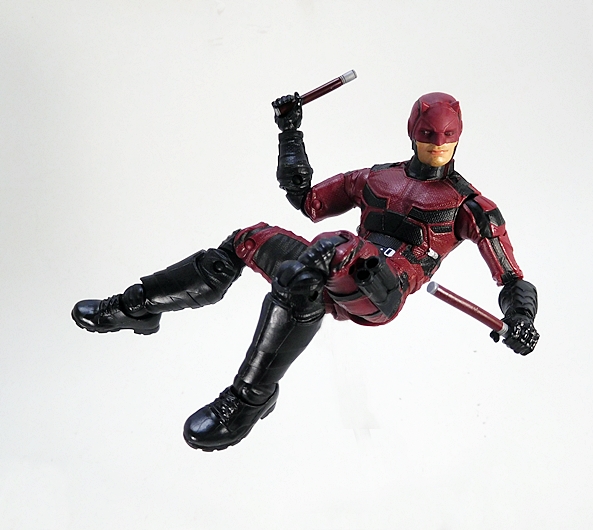 The articulation here is very good. The legs are ball jointed at the hips, have double hinges in the knees, and swivels in the thighs. The ankles have both hinges and rockers. The arms have rotating hinges at the shoulders, hinged pegs at the wrists, swivels in the thighs, and double hinges in the elbows. The torso has a swivel at the waist, an ab crunch hinge under the chest, and the neck is both hinged and ball jointed. Oddly enough, the feet are actually pegged into the legs, which is something I don’t recall seeing too often on my Marvel Legends figures. 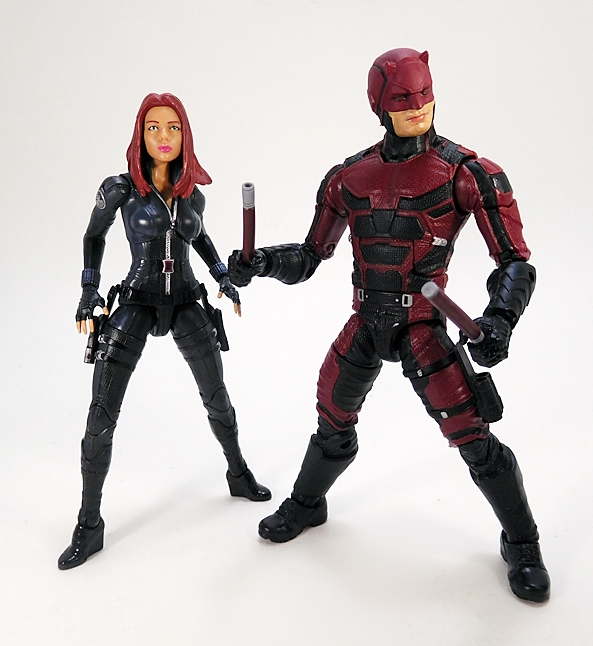 I’ve been hoping for a Legends Daredevil from the Netflix Series from the very beginning, and while I think there’s a little room for improvement in the face sculpt, the figure still turned out pretty great. The detail and paint on the suit alone really carries the day and the articulation makes him a lot of fun to play around with. A second set of batons with the cord attaching them would have been pretty cool, but as he is this is still a great figure to kick off the new wave with. When this assortment first hit, it looked like they were going to be really hard to get, but eventually things cooled down and I was able to get Daredevil, and the entire Netflix team, off of Amazon for around $15 a pop. Not bad at all.