Welcome to another Anime Saturday! I’m a little bummed out today because my vacation is coming to a close, so I’m drowning my sorrows this morning in coffee and opening up a new figure to cheer me up. It’s been a little while since I dipped my toe into that sweet, sweet pool of Kantai Collection prize figures, so it’s time to remedy that by unboxing another one of Taito’s lovely Fleet Girls. This time I’m checking out the Akizuki Class Destroyer, Teruzuki! This is the “Moon Viewing” version which is sort of akin to the “Day Off” figures, some of which I’ve looked at before. I’ve actually been on the hunt for SEGA’s Super Premium version of Teruzuki, as that one is all geared up, but I have yet to find a domestic source for her. In the meantime, I wound up buying this one just to get her in my collection. And also because Taito usually does some really nice work with these figures. 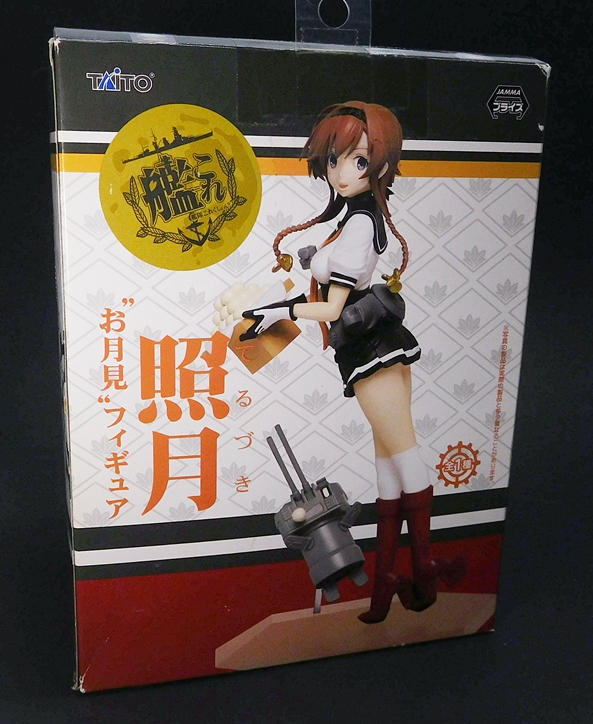 Teruzuki comes in a fully enclosed box with some shots of the figure on the front and side panels. It’s an attractive enough box, but these things are so flimsy that they’re usually pretty rough by the time they get to me. This one was even wrapped in plastic and it still took a pounding. The only English on the box is on the top and bottom panels where it has the figure’s name. You get the ubiquitous JAMMA logo in the upper corner and there are perforations to make handles on the sides.

The back panel of the box shows her paired up with her sister-ship, Akizuki. These two Fleet Girls are sold separately, but they’re actually meant to be displayed together. Inside the box, you get some extra bits of reinforcing cardboard and the figure is wrapped in plastic with a little minor assembly required. And as always, these figures are scaled at about 8-inches or so. 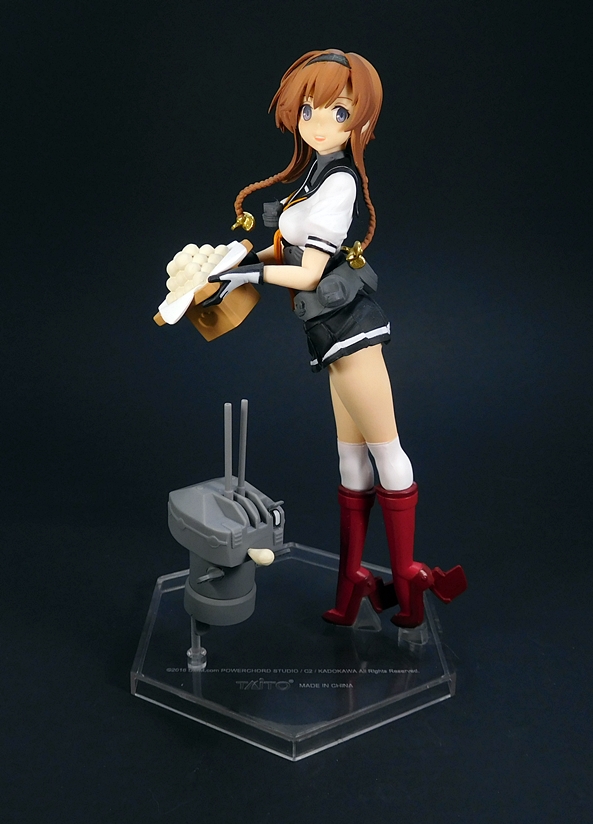 And here she is all set up and looking adorable. I really dig the pose here. Teruzuki is leaning forward and proudly offering up a box of Dango, which as I understand it are like sweet dumplings and are often enjoyed at the Otsukimi, or Moon Viewing Ceremony. Her sailor uniform is pretty typical stuff with a short pleated skirt, black with white stripes and a white top with a black collar with white stripes to match the skirt. She also has a bright orange neckerchief to add a little color to the ensemble, and it’s secured below her collar with her Anti-Aircraft Fire Detector. What a great little detail! Her outfit is rounded out by a pair of white knee socks and tall red rudder boots.

From the back, we can see that despite this being a leisure figure, she still has her arming mount on the back of her waist. One of the reasons I really want to get a regular version of Teruzuki is because her gear includes a really cool and distinctive pair of drum magazines that she wears on her thighs. 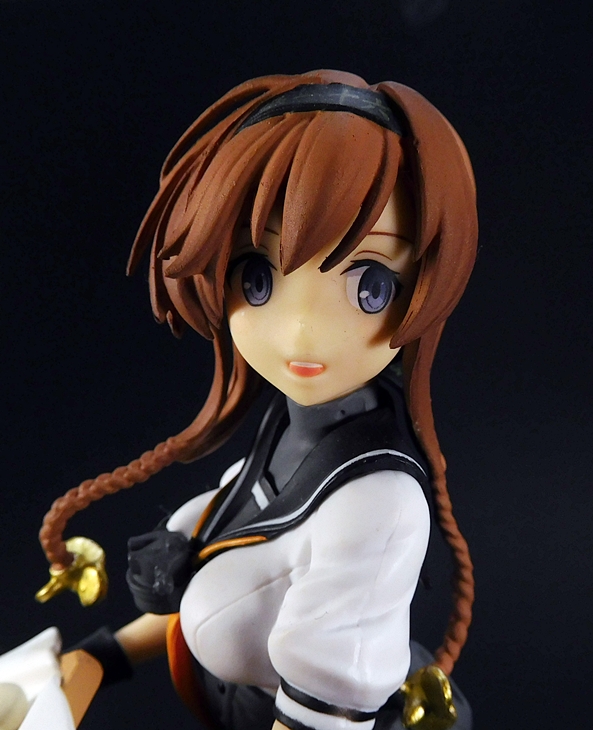 The portrait is nice and simple. Her blue eyes are printed looking off to the side and she’s offering a little smile. I love the golden propellers at the ends of her pigtails. Her headband is also marked “61” in Japanese, as she is part of the 61st Destroyer Division.

Her mound of tasty Dango are neatly stacked in a pyramid with white linen unfolded to display them. If anyone out there knows how to make Dango, be sure and send me a batch because they sound delicious. 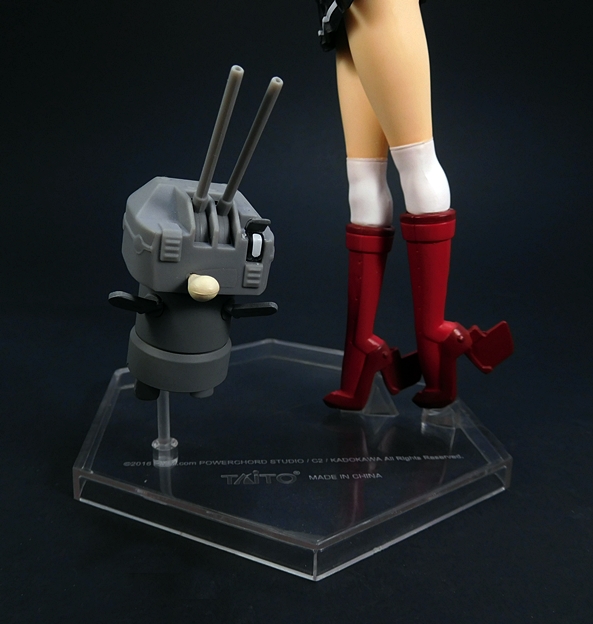 Like the fan favorite Fleet Girl, Shimakaze and her Rouchouchan, Teruzuki is accompanied by her own adorable little sentient gun turret, in this case referred to as Chou-10cm-hou-chan. This little guy is mounted on a ball jointed post and hovering over the base, so you can position him whichever way you like. The guns are articulated and he has one view port closed to make it look like he’s winking. He also looks like he’s sucking down a Dango, probably the one missing from the top of the pyramid. As you can see the base is a simple clear plastic hexagon and Teruzuki is positioned on it so the flat side behind her can sit flush with the opposite side of her sister ship’s base. There’s no name inscribed, which is fine by me. Taito doesn’t tend to put the girls’ names on the bases.

And here’s a shot of her with Taito’s Battleship Yamato “Day Off” figure, just to show that they scale really well together. The OCD in me wishes they would stick with one style of base, but I guess they each have their merits. Also… So much food being served… now I’m hungry.

It’s been a while since I bought this figure, but I seem to recall her being a whopping $13 shipped off of Amazon. Honest, folks. I don’t get any kickbacks from mentioning Amazon, but it really is a great place to grab some of these figures. Anyway, I really like Teruzuki a lot. Taito continues to deliver some especially sharp sculpts and clean, vibrant paint for figures in this price range, and all with a wonderful attention to the character’s personality and appearance. Naturally, I picked her up with the “Moon Viewing” version of Akizuki, and I’ll be checking out that figure next Saturday, as long as time permits.