It’s time to start in on an all new wave of Marvel Legends, and hey, look at that! I’m actually getting to the Black Panther Wave while the movie is still in the theaters! But collecting Marvel Legends is like fighting Hydra, complete one wave and two more take its place. I still haven’t opened or reviewed the Sandman Wave, and I haven’t started buying the new Deadpool, Spider-Man, or Infinity War Waves. And I am most definitely not complaining, Hasbro. Keep ’em coming! 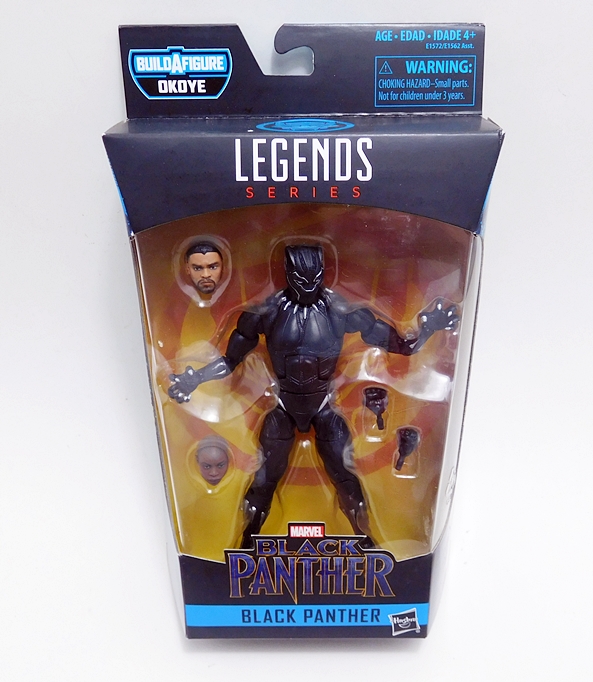 Yeah, I called this the Black Panther Wave, but only half of the figures, plus the Build-A-Figure, are from the movie. There are also three random comic-based figures tossed in, and only one of those has me excited, and no it’s not the half-naked Namor! I know we’re getting Everett Ross in a two-pack, but no Klaw or Shuri? That’s just unforgivable. Anyway, the packaging is the same old thing with some nice branding on the front to tie it into the film. Let’s take a look at the figure, and I’ll do some comparisons with the Civil War version along the way. 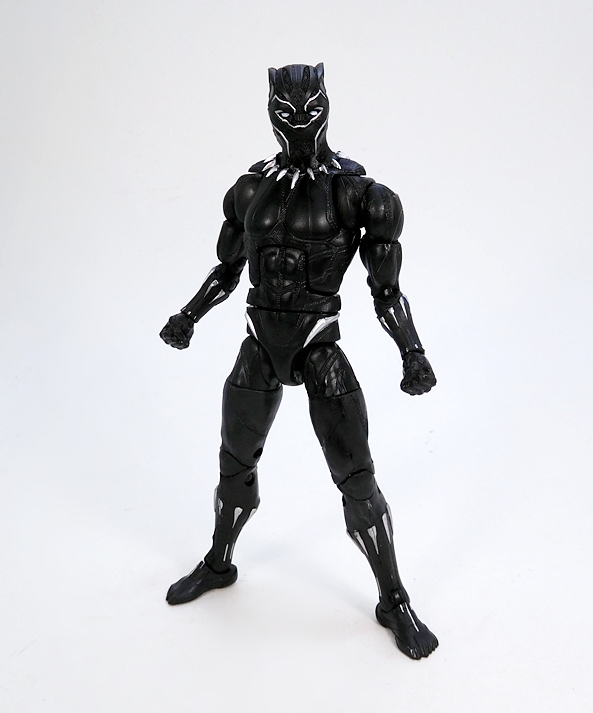 Appropriately enough, the new suit features an all new sculpt, so don’t go thinking Hasbro cheaped out on this one. Honestly, they probably could have and I wouldn’t have noticed the difference until the movie hit Blu-Ray and I could really scrutinize the design. Indeed, getting these two figures side by side is the first time I’ve really taken the time to look the changes made to the costume. I was surprised to find so many differences. The sculpted lines in the costume are all different patterns and the new costume doesn’t feature quite as many of them. But the most obvious difference for me is in the necklace, which is a lot simpler.

The coloring is the same matte black with silver accents and Hasbro did a nice job on the little bit of paint that’s here. All the silver apps are nice and clean on my figure. The new costume has some rather aggressive spike-like bits painted on his gauntlets, whereas the old look just had a painted border at the edges. You get more of those silver spikes around the tops of his his boots, where the older costume had none. All in all, there’s a little more silver on this release and it’s more of a pure silver, whereas the older figure was more of a silver-gray.

The masks are quite different too. I think the old one looks a lot more severe. The silver lines that converge on his brow make him look a lot more aggressive to me, as do the points on the ears. The new head is a little more rounded. If you were to ask me to choose a favorite between the two, I’d be leaning toward the Civil War release, but they both look great, and in the end it’s just a matter of taste. 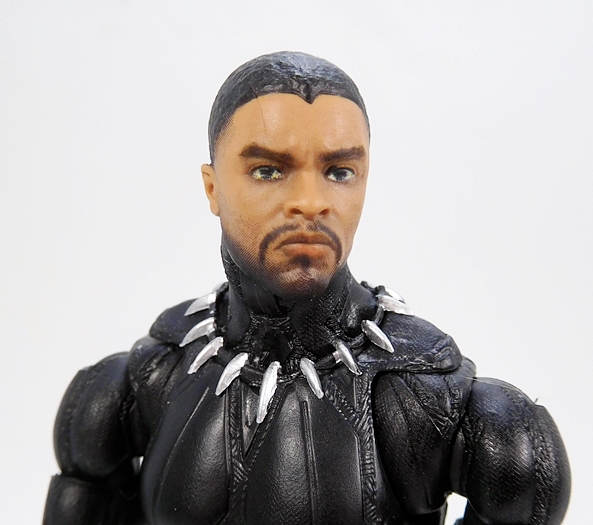 You also get an unmasked head, and holy shit, if you ever want an example of Hasbro being a company looking to improve, just check out this two years of progress. I remember being rather favorable toward the head on the Civil War figure, but oh boy does it look dated compared to this one. The likeness to Chadwick Boseman is very much on point. If I’m going to nitpick, I think the hair could have been done a little better on the new figure. It’s a little too precise and has a painted on look to it. But still, overall, this is a fantastic new likeness. I really hope they can start bringing this kind of portraiture to the Star Wars Black Series at some point in time.

In terms of articulation, you get all the same points in the Civil War version. That means the arms have rotating hinges in the shoulders, double hinges in the elbows, swivels in the biceps, and hinged pegs in the wrists. The pegs in the wrists allow you to swap hands, between fists or attack hands. The legs are ball jointed at the hips, double hinged at the knees, and have swivels in the thighs. The ankles feature both hinges and rockers. There’s a swivel in the waist, an ab crunch under the chest, and both a hinge and ball joint in the neck. So what’s the difference? Hasbro upgraded to the lateral hinges in the shoulders, and that’s pretty damn cool. 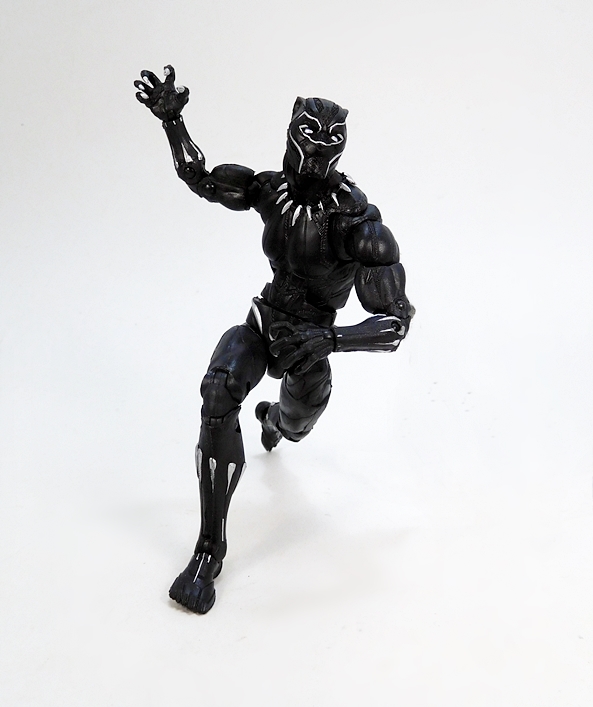 Apart from the extra hands and head, T’Challa doesn’t come with any additional accessories, and that’s fine. I can’t really think of anything he’s missing.

If I had missed out on the Civil War release, I’d be very content to have this figure representing the MCU Black Panther in my collection. Yes, aesthetically I gave the edge to the previous one, but this is still a beautiful figure and the added articulation makes it all the more fun to play with. Not to mention the unmasked head is a huge improvement. Initially, I wasn’t really sure we needed another Black Panther figure so soon, but this release proves me wrong. On the next Marvel Monday, I’ll check out Killmonger!