As promised, Tuesdays in March are going to be all about Masters of the Universe Classics, as Super7 shipped out their first Collector’s Choice Wave a couple of weeks back and I am pretty excited to keep tearing into these. Last week I opened up evil slaver bastard, Lodar. This week I’m checking out the only one of the Heroic Masters in the wave, Hawke, the “Heroic Feathered Fighter!” Um, really? Did you even watch that episode?

Ah, it feels so good to be seeing this packaging again! Super7 may be running the show now, but they’ve kept the packaging 100% faithful to the Matty Collector style. I still get a warm and fuzzy feeling every time I get ready to open one of these. I know some folks were miffed that Super7 didn’t move to a collector friendly package, but I’ve been ripping these things open for years now, and I’m not about to worry about that now! They also brought back the bios on the backs of the cards, which I certainly appreciate, because I know next to nothing about some of the characters in this wave. Of course, you don’t need to be a He-Manologist to recognize that Hawke is an Avionian. Oh yeah, and the bio declares that she’s also Stratos’ sister. And supposedly, she was under some kind of spell when she did all that betrayal shit, so I guess it doesn’t count. 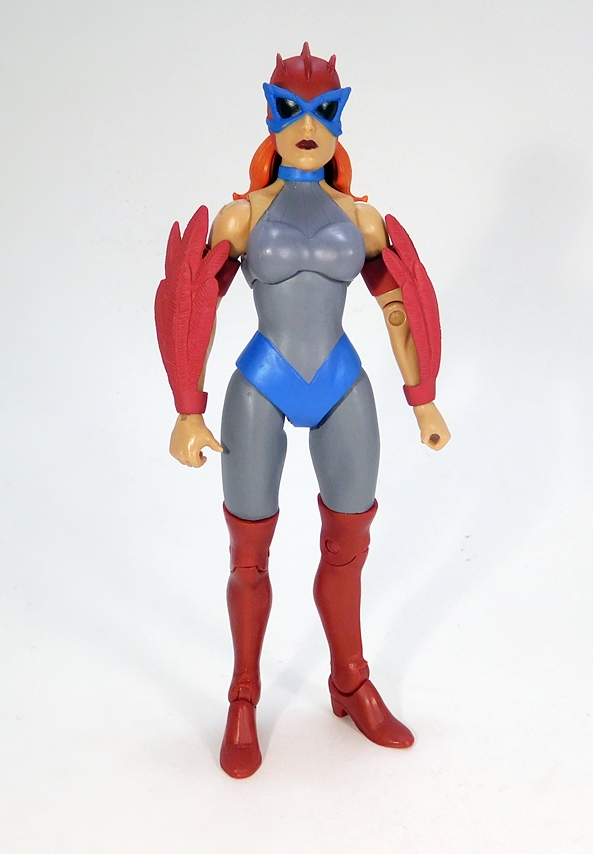 While Hawke is part of the Collector’s Choice assortment, she would also fit right in with the Filmation figures. She appeared in the episode “Betrayal of Stratos” and oh, boy did I hate her voice. She was also a pretty horrible person. The figure adopts a simple sculpt to match the Filmation design and does a great job of it. Just like her animated counterpart, her costume features a sleeveless gray bodysuit with blue birdy-panties and maroon thigh-high boots. The only real sculpted detail on the whole outfit are the cut lines radiating down from her neck to her chest. Like I said, she’s simple, but she looks good and I do dig the combination of colors.

As an Avionian, Hawke features wings on her arms with sculpted feathers. These are attached to the bracelets on her wrists, and she has matching bands around her biceps. Much has been said about Super7’s female figures and how their hips are awkward. I haven’t been following HipGate too closely, but I’m pretty sure it involved this figure and the Filmation Teela. I also recall them saying they fixed it. Well, I’m not sure if it’s the same issue or not, but Hawke has a pretty wide thigh gap. I’m told that there are women out there who would kill for that kind of thigh gap, but in this case, I think it makes the figure look a little strange when standing. On the other hand, it’s not so much a problem when she’s in an action pose, so it didn’t take me too long to get over it.

I like the head sculpt a lot, as it’s basically a female version of Stratos, thankfully without the weird Amish-birdman beard. She has the very iconic Avionian goggles, a helmet with three crests running down the top, perfectly painted lips, and a short coif of reddish-orange hair spilling out the back of the helmet. There’s a little paint rubbed on my figure’s goggles just above her right cheek, but I really didn’t even notice it until getting in close with the camera. The head does sit pretty low on the neck and this obscures the neck entirely when viewing the figure from the front. Still, all in all it’s not a bad head. But wait… there’s more!

Hawke also comes with an extra head, which I believe is supposed to be Stratos’ wife, Delora. It’s pretty much the same head sculpt, but with longer blonde hair spilling out the back of the helmet. I think I may actually display the figure as Delora, because Hawke was such a lying, scheming, traitorous bitch in the cartoon. Maybe if she came with a cage, I’d keep the Hawke head on and put her in it. I hear the bird people have a thing about cages. 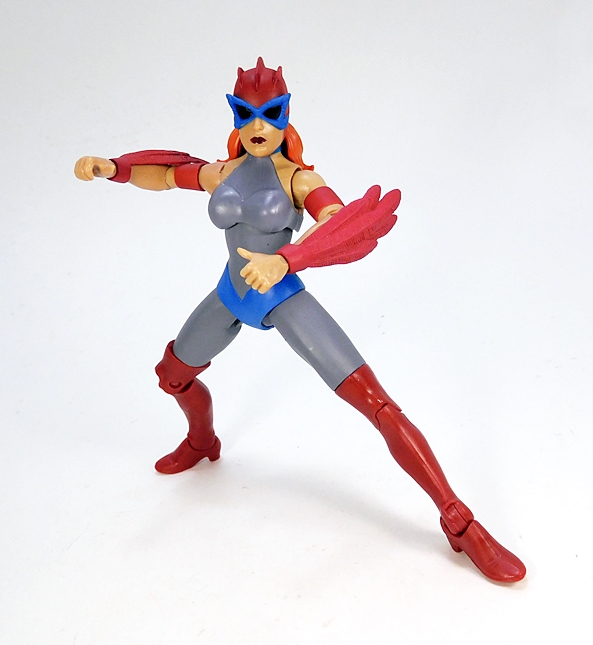 The articulation is similar to what we’ve been seeing in the Matty MOTUC figures, but with one huge difference that I neglected to mention in my Lodar review, and that’s the hinged wrists. Otherwise, she has rotating hinges in her shoulders, bicep swivels, and hinged elbows. The legs are ball jointes at the hips, have swivels at the tops of the boots, hinges in the knees, and both hinges and rockers in the ankles. There’s no waist swivel, but she does have a ball joint under her chest and the neck is ball jointed. But don’t expect to get much movement out of the neck joint. Between the sculpted hair and how low the head sits, it’s not much use. Also, my figure feels a bit more loosey-goosey than most of the other MOTUC figures in my collection. I didn’t have a problem with Lodar, so maybe this is just an isolated problem. She can stand and pose well, but it still feels like there’s too much play in some of the joints. 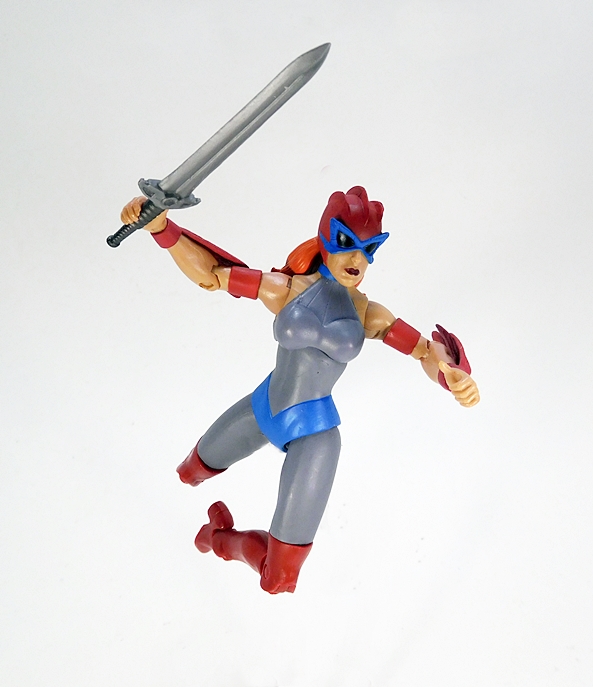 In addition to the extra head, Hawke comes two weapons. The first is her sword, which is a really cool and classic design. The hilt features a detailed sculpt with a ribbed grip that almost looks like it’s made to extend and contract for single or two-handed fighting. It has a short crossguard and a rather stout blade. It’s a pity there’s nowhere that she can wear it.

The other weapon is a gun, some kind of smokescreen gun, I think, which I’m not crazy about at all. It’s a weird and awkward design and she can’t really hold it all that convincingly. It does have a leather-like carry strap, which seems like it might be a first for Masters Classics. I think I’ll stick with the sword.

I think I was looking forward to Hawke the least out of this assortment, so I can’t really say she disappointed me. She’s not a bad figure, but there’s nothing about her that really blows me away either. Super7 did a nice job recreating the Filmation look and the extra head is a nice bonus, but there’s just a few too many little nagging things about this figure that keep her from being a homerun. I’m still happy to add her to my collection, and I’m pretty confident that she’s going to be the only underwhelming figure in the wave. But I guess we’ll test that theory next Tuesday as I open another figure in the assortment. 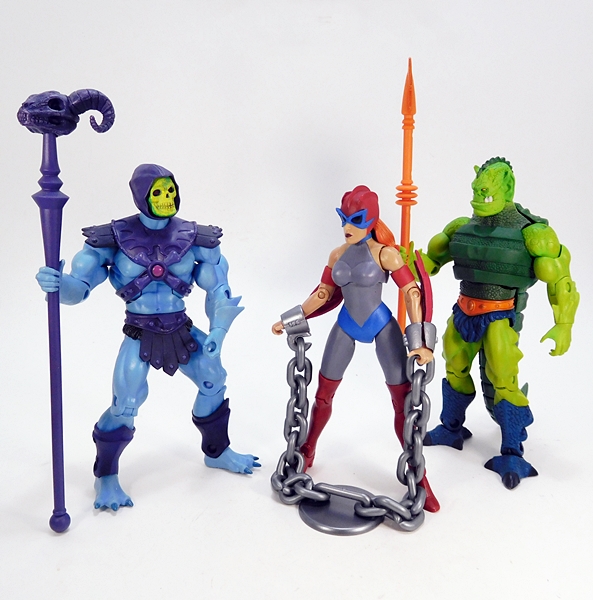 Hawke: “But why, Skeletor? I got you the Egg of Avion!”