While I may be almost caught up on Mythic Legions, I’m still swimming in Vitruvian HACKS figures, both from Series 1 and 2, that are waiting to be opened and reviewed, so I thought I’d end the week dipping back into the fantasy-inspired Series 2 with the last figure I have to review from the first wave. Let’s check out the Male Orc Conqueror!

As always, the regular HACKS releases feature a colorful portrait-orientated card with a plastic bubble and overlay that hugs the sides and allows for the best of both worlds: A traditional carded look, while still being totally collector friendly. BFS hasn’t messed with this presentation since Series 1 and I hope they never do! And just look inside that bubble! This guy comes packed with a ton of stuff, making him feel more like one of the Ultimate Exclusives from Series 1, than a regular release. If you read my review on the Knight of Accord, you’ll have a good idea about what to expect here, as this fellow is basically the Orcs answer to that figure, with the same types of extras. I’ll note that the word “Male” doesn’t actually appear on the card, but BFS has used it in their catalog listing to distinguish it from the Female Orc that followed.

Here’s Mr. Orc out of the package and stripped down to his bare essentials. Unlike the Series 1 figures, which featured separately sculpted outfits, the bulk of the Orc’s outfit is sculpted as part of the buck. This includes the chest and back plate, which has a cool hammered metal finish, sculpted olive green trousers, and the basic boots. Articulation, however, remains unchanged from the Series 1 figures, and while I would really like BFS to add swivels in the thighs, what we get here is still plenty good. 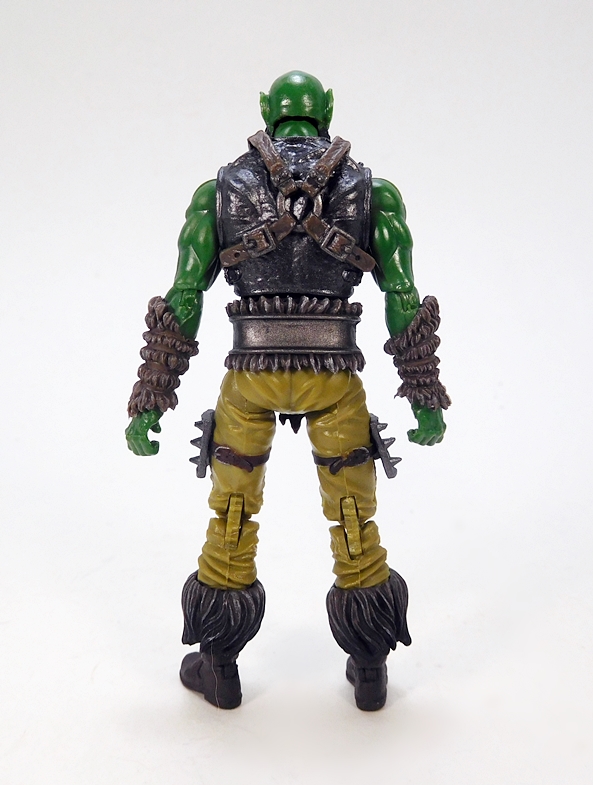 Additional separate pieces provide his wide belt with sculpted fur and the large medallion belt buckle, the wrist wraps, and the furry fringe at the tops of his boots. There are also two spiked plates that tab into the slots on the sides of his legs. The chest harness is also a separate piece. All the detail here is quite exquisite for a figure in this scale, right down to the tiny sculpted buckles meant to hold on his thigh straps. And while the colors on the outfit tend to be drab, the green skin adds some flash to the overall deco and the steel paint for the armor looks quite nice. 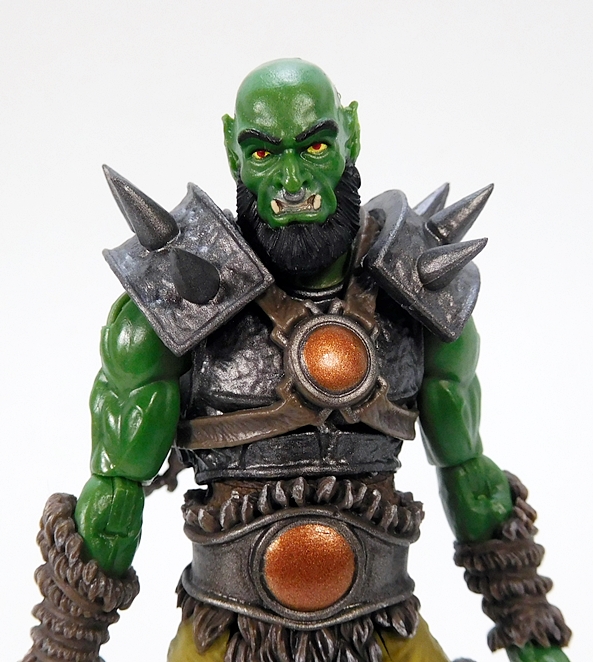 There’s also a pair of spiked shoulders that can be pegged into place and a fur half-cape that an go with them. The shoulders stay on securely, and be careful about those spikes, because they are sharp!

You get two head sculpts to choose from, which is very welcome, because rather than representing a single character, this figure is meant to be customized in different ways to build your Orc army. The stock head features a full beard, as well as great little details like the nose ring and the protruding lower teeth. The alternate head is clean shaven and without the nose ring. Both feature some very sharp details, particularly in the pointed ears. The paint is overall pretty sharp and clean, although my bearded had has a slightly wonky eye. It’s nothing too bad, but if you happen to be picking up this figure at a convention, you might want to check out the eyes before buying. 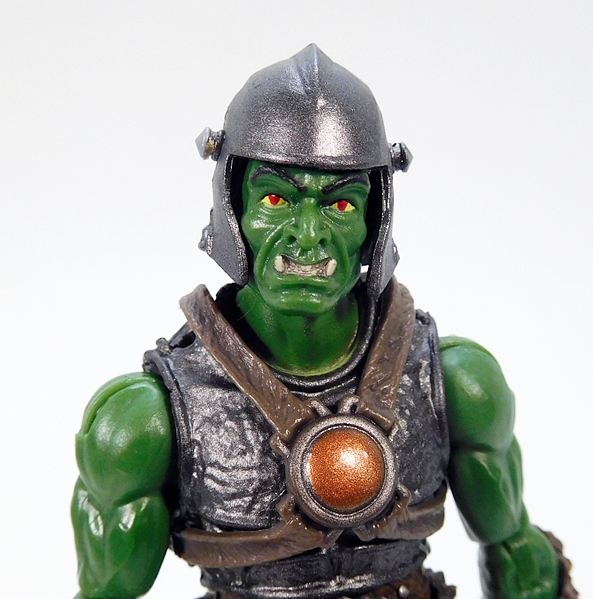 In addition to having two heads to build off of, you also have a number of helmet combinations to work with. First off, you get an open-faced helmet with knobs on the sides to attach one of the two face-plates, and also works quite well as a helmet all on its own. This system works the same as it did for the Knight of Accord, which is to say it doesn’t work all that well. The masks have holes that are supposed to peg through the knobs on the mask, but the ends of the knobs are too big for the holes. Also, the holes on the mask are located near the edges and I’m afraid if I force them, I’ll tear the edge of the mask. As a result, these will hold onto the helmet fairly well in an opened or closed position, but they won’t hinge up and down as intended. 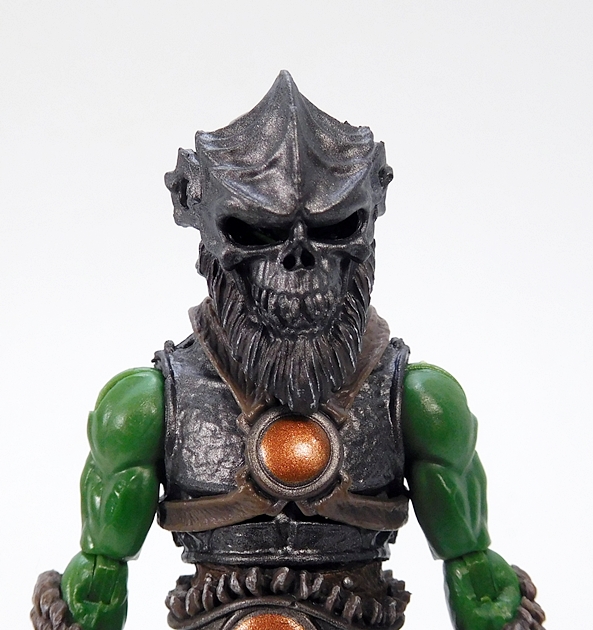 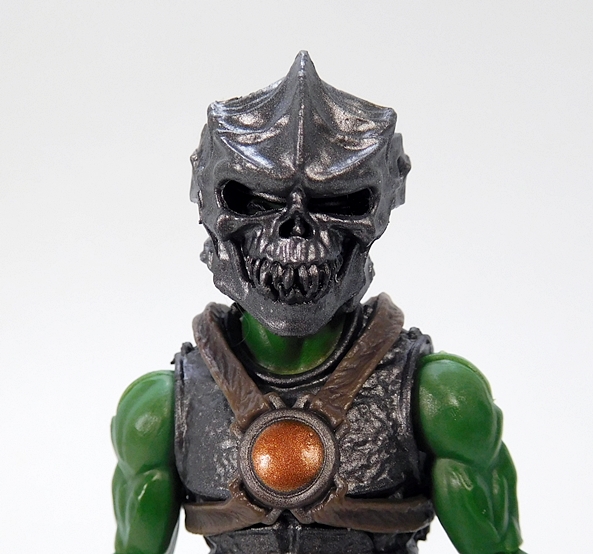 Both of the masks are beautifully sculpted and look very Klingon to me with those stylized forehead ridges. Indeed, they look so damn Klingon, I’d be surprised if that wasn’t the intention. Both of the masks have a skull vibe going on, designed to strike fear in the hearts of all who cross blades with them. One features a fully sculpted beard.

The other piece of headgear is a full helmet with some rather sinister looking wings and cheek-plates. This piece is sculpted with the same hammered finish seen on the chest armor, and a mohawk of nasty and crude looking spikes. I like the design of this helmet a lot, but I also think it would fit more on an evil knight than it does on an Orc. If I do wind up troop building some of these guys, I’ll definitely reserve this helmet for the leader. And speaking of troop building, between all these different helmets and the two heads, you could probably buy a half-dozen of these Orcs and have no two look alike, and we haven’t even come to the weapons yet. So let’s talk weapons! 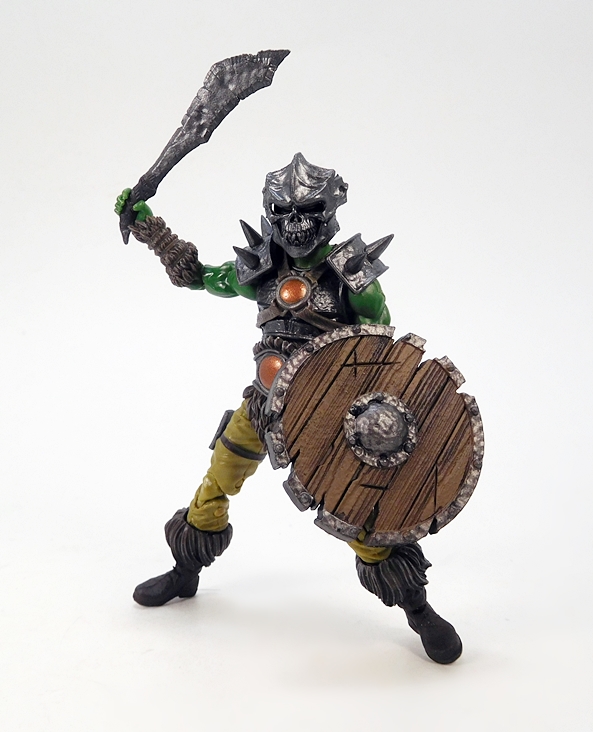 The Orc comes with a sword and shield, and each of these are wonderfully crude weapons certainly befitting of a savage Orc. The sword looks like someone took a farming implement, gave it a couple of wacks with a blacksmithing hammer to shape it into a something a little more befitting of butchering manflesh and handed it out to the next Orc in line. It’s jagged and primitive edges give it the no no nonsense look of a cleaver for the rank-and-file soldier and that’s pretty much perfect for this guy. The blade’s finish has a nice metal sheen to it and the grip features a sculpted wrap that looks like it’s meant to be animal hide.

The shield is without a doubt the showpiece of this figure’s accessories, as it is nothing short of a masterpiece. It’s a circular type with sculpted wooden planks, which have seen better days. They’re riddled with slash marks and have whole pieces taken out of them from the rigors of battle. The edge and center are sculpted to look like hammered metal, and they too have some pretty major wear from use. The attention to detail is every bit as strong on the inside as on the outside, where you get reinforcing metal strips bolted across. The shield is held using a simple grab bar, which has a beautiful woodgrain finish painted onto it, and there are also some loops, which could be used with a string so the Orc could wear the shield on his back. 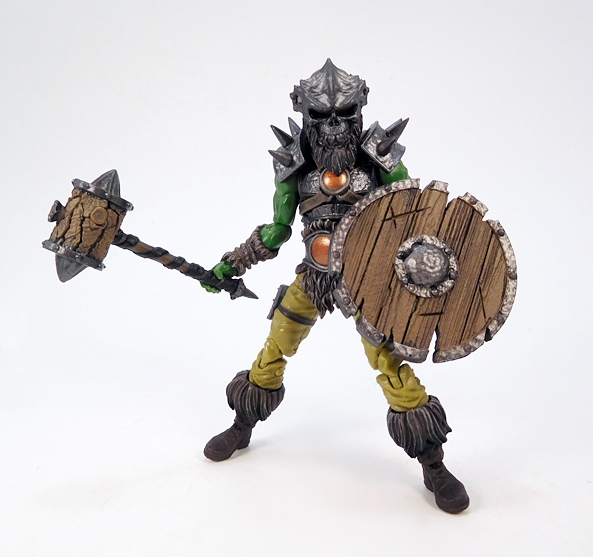 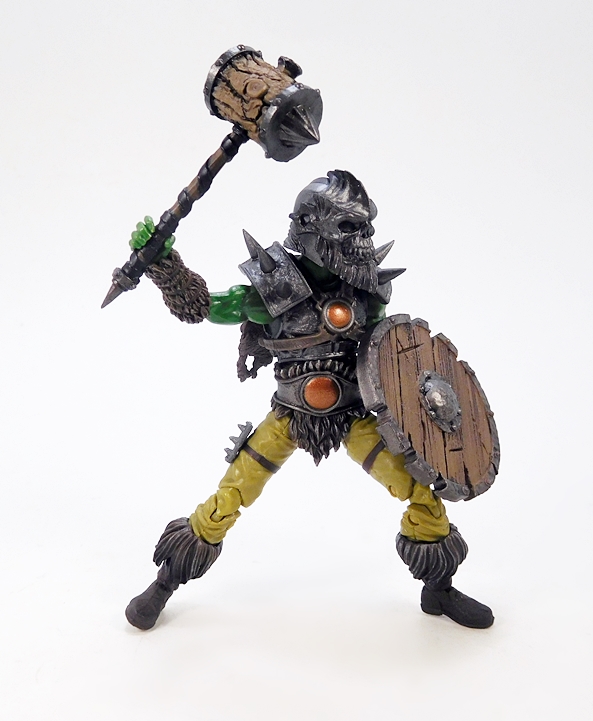 If swords aren’t your thing, the Orc Conqueror also comes with this nifty battle hammer, which looks like a cross-section of a tree with metal spiked caps on the ends and a pole stuck into it. It’s crude, it’s vicious looking, and the detail is off the charts. The bark on the tree-section is beautifully sculpted and painted and the hammered-spiked caps feature sculpted rivets. The handle has a sculpted wrapped grip, and there’s another spike at the end of the shaft. This thing is the perfect Orc weapon, it looks devastating, and I only wish the shaft were a little longer so he could better wield it using both hands. 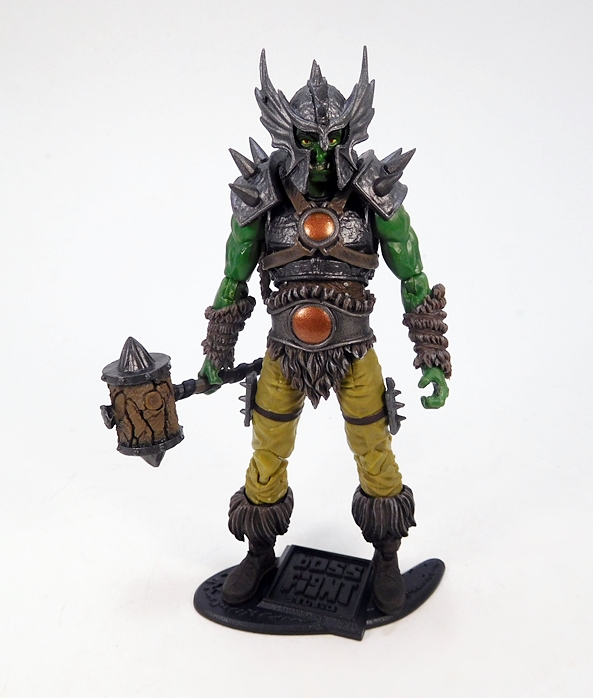 Finally, the figure comes with the usual black Boss Fight Studio stand. These are always a nice bonus, but the figure stands fine on his own, so it’s not necessary, unless you’re setting up all your figures for display and don’t want to risk them toppling into an avalanche. 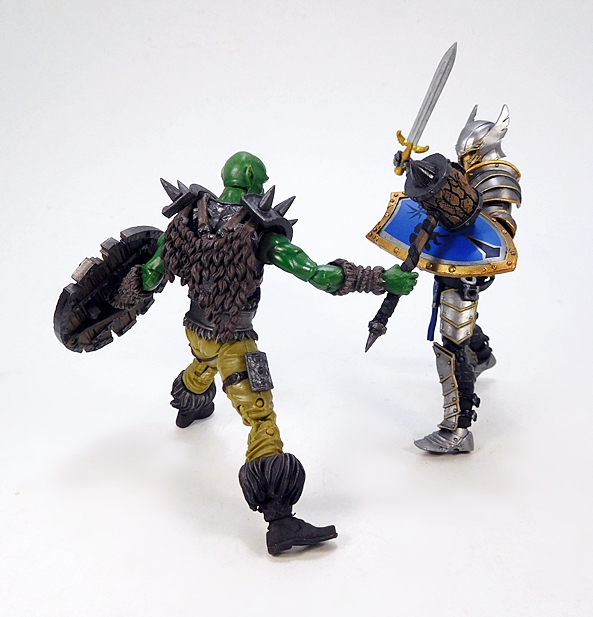 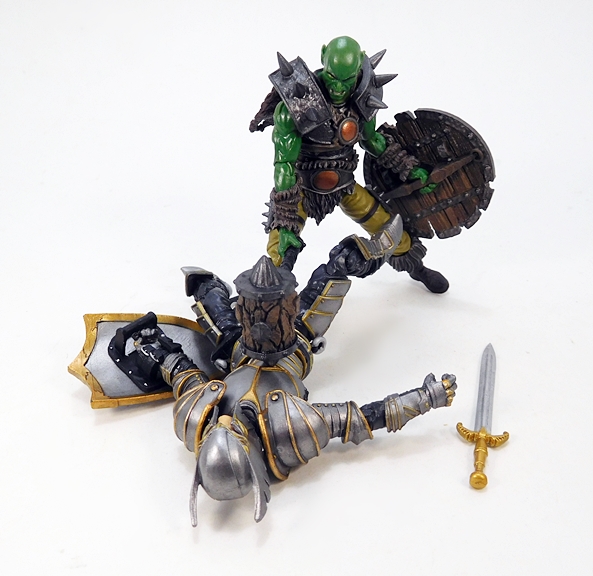 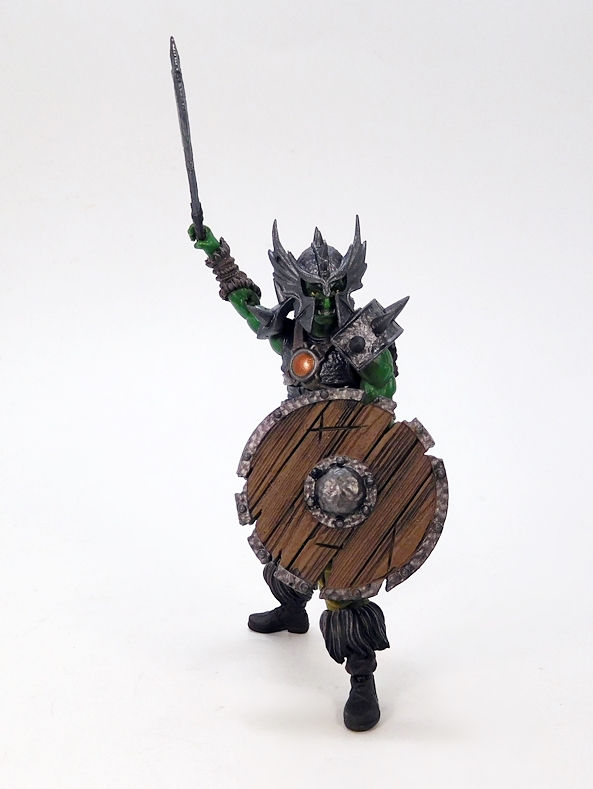 The Conquering Orc makes for another great addition to the Vitruvian HACKS Fantasy Series. There’s no denying that the folks at BFS put a lot of love into this guy, from his head sculpt to his outfit and weapons. The attention to detail is superb and the options for display are many. I could easily pick up four or five of this figure and outfit them as a squad of unique looking Orc soldiers. But of all the things to love here, I think my favorite is the fact that this figure looks like someone took one of my beloved old AD&D miniatures and gave him articulation and removable accessories. I have to imagine that’s exactly the feeling they were going for, and it’s exactly the sort of thing which will keep me coming back to collect all this line has to offer.