Since I’m swimming in Marvel Legends, I didn’t want to take up Marvel Monday with a non-Legends item, so I thought I’d end the week by checking out my new Marvel Gallery statue. If you aren’t familiar with these pieces, the Gallery line grew out of DST’s Femme Fatales series. These are roughly 9-inch scale PVC statues, and DST has been pumping out a lot of characters from both the Marvel and DC Universes. A couple of Marvel Mondays back, I reviewed Marvel Legends Gwenpool and lamented the fact that they didn’t include an unmasked head, but when I found out that DST released an exclusive unmasked version of their Gallery statue, I decided to go ahead and add it to the collection. The unmasked version was a GameStop Exclusive, and to be honest, I don’t get why GameStop is getting exclusives on this comic book stuff. Although the last time I was in one, it looked like the toys and collectibles were beginning to overtake the games. Either way, I actually picked this one up online through Think Geek. 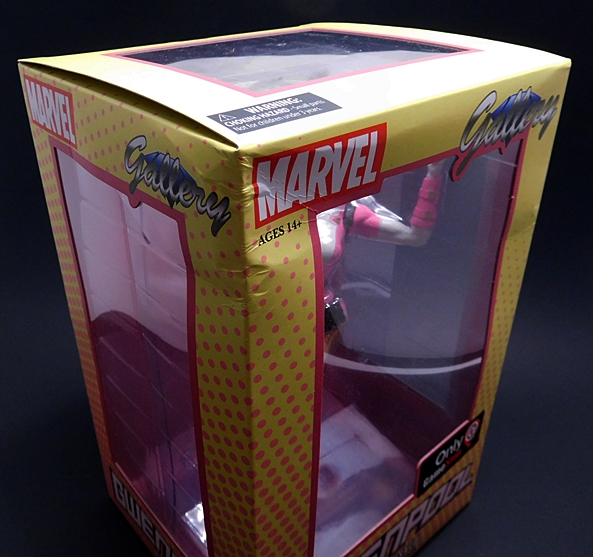 UH OH… This is the first time I bought anything from Think Geek’s website and that giant crunch to the corner of the box signifies that this will also be the last. They threw the statue in a box, dropped an airbag in it, and kicked it (possibly literally) out the door. The shipping box was perfect, but the statue box got crunched because there was insufficient packing. Can’t blame this one on the courier. I suppose it’s possible it was like that before they shipped it, but I’d consider that scenario even worse. Look, I’m not a real stickler about the condition of packaging. If I get a damaged Marvel Legends box from Amazon, I’m not going to cry about it. It’s a toy and it’s the cost of (usually) getting the item below retail cost. But when you’re a company that specializes in selling collectibles, like Think Geek is, you have to do better than this if you want me to do business with you.

Anywho, the packaging is exactly what you would expect from DST’s prolific Gallery series. The statue comes in a window box with windows on the front, top, and both sides to let in plenty of light, and Gwen is suspended inside between two clear plastic trays. As always everything is collector friendly. The box itself has a yellow and pink pokadot deco with a pink interior to tie it into the character. In the past, DST’s exclusive declarations have been pretty understated. Sometimes the retail exclusives have a sticker, while the convention exclusives just have a piece of foil tape with the limitation. In this case, the GameStop Exclusive is called out on the box itself, both front and back, and “Unmasked” has been under her name. Otherwise the deco and presentation is the same, and I’m still not sure why DST has started calling these “Dioramas” but it’s not really important. Let’s get Ms. Poole out of the box and check her out! 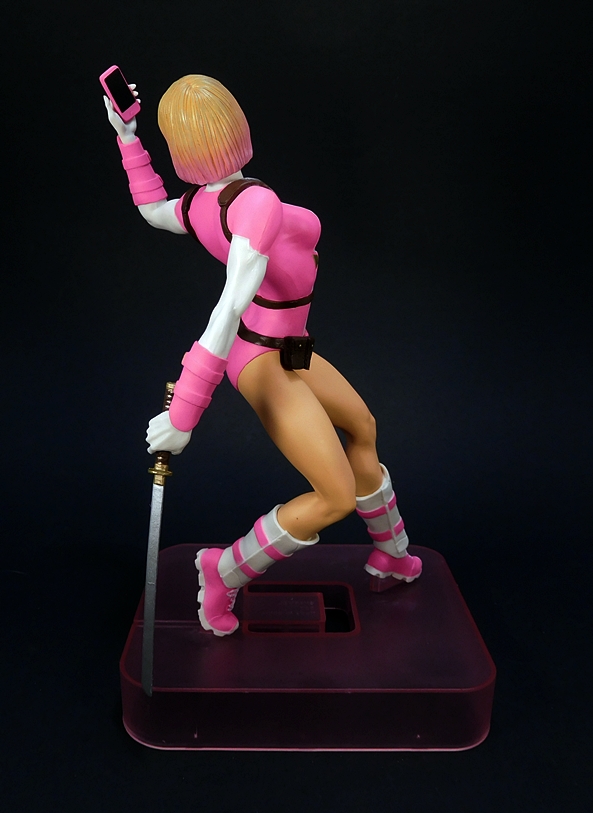 Gwenpool strikes a rather dynamic pose as she stands up on her toes, legs bent, as if she’s running towards a fight… and naturally, she stops to take a selfie, because that’s what all the young “hip” Marvel heroes (and anti-heroes) do these days. Most of the time it annoys me to no end, but here it just seems to fit the character well enough to not bother me. The pose does a wonderful job of accentuating Gwen’s curvy form, especially with the way her back is arched. What’s more, this is a pose that doesn’t rely on any specific “sweet spot” and looks great from a number of angles.

As is always the case with DST’s Gallery statues, every detail of the costume is part of the sculpt, even the lines where the pink and white meet. A lot of companies would have been content with just using paint, and that’s something I really enjoy about DST’s work on this line. You also get some particularly fine sculpting for her muscles and cool little details like the treads on her sneakers. I do wish they had added some vertical cuts to show off her knitted socks and distinguish them from the smooth shin guards. Oddly enough that’s something Hasbro did on their 6-inch Legends figure, but was omitted on this statue.

The quality of the paint application is pretty solid. The pink is smooth, as are the flesh tones in her legs. The brown leather on her belts and pouches have a rich, brown leathery look to them and the tiny buttons and buckles are all neatly painted bronze. Rather than being pure white, the white is a bit more of an eggshell color and has a little gloss to the finish, whereas the pink is matte, making for a subtle, but attractive contrast. They did a particularly nice job painting the laces on her sneakers. Overall, some of the lines could have been sharper, but there’s certainly nothing here that’s unacceptable for a statue in this price range. Quite the contrary, I’ve seen worse paint on more expensive pieces. 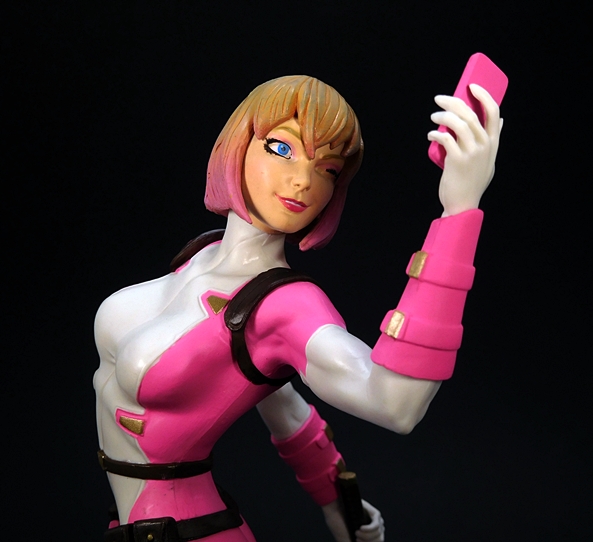 The portrait is certainly on point and again, most of the paint here is sharp and clean, particularly on her open eye and lips. I like that they didn’t go overboard on the smile. Yeah, Gwenpool is often depicted grimacing like a psycho, but I think what they did here works better with the context. The sculpted hair is a little thick, but I think it looks OK, and the way it frames her face gives it a nice sense of depth. The pink highlights in her hair look good, but I think the blonde could have been more blonde. Aside from that, my only real nitpick here is the winking eye, which from certain angles looks like she got punched and it’s swollen shut. Fortunately, there are plenty of options to display the statue where it isn’t all that prominent. 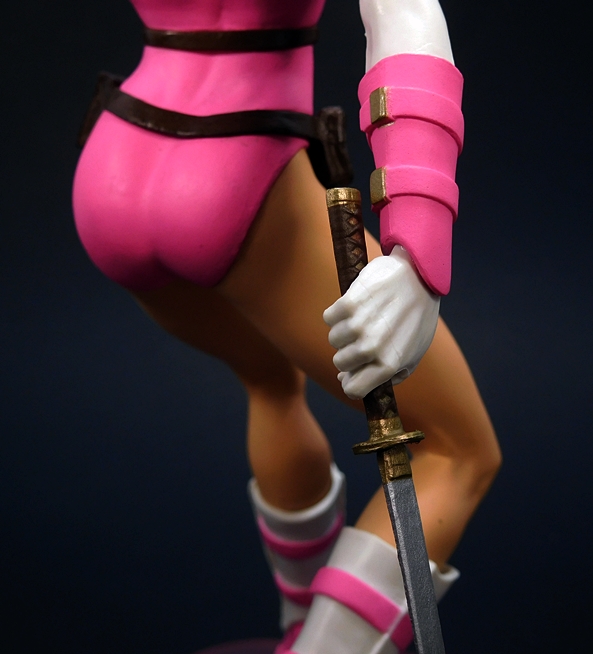 The cell phone in her left hand is pretty simple, as it’s got a pink case and a black screen. It’s a shame that DST didn’t run off a sticker with Gwen’s face to put on the screen, but it’s no big deal, since the screen won’t be visible with the way I’m going to display her. Her right hand is clutching her katana, and while the statue does come holding it, the sword is a separate piece. The hilt sculpt and paint are both very well done. I should compare and see if this piece was reused from the Lady Deadpool Gallery statue. 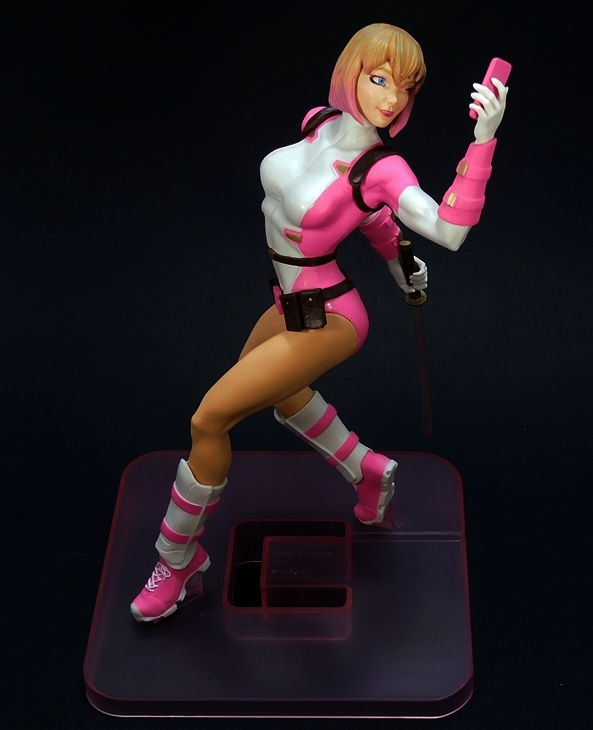 For the base, DST went for a semi-transparent pink “G” done in a block letter style. This works fine, although I do prefer displaying the statue from an angle that has the “G” slightly askew. If memory serves, this isn’t the base that they were going with when they first solicited the statue, but I’m fine with it.

If you’ve been kicking around FFZ for a while, you probably already know that I absolutely adore DST’s Gallery series, and Gwenpool here is a perfect example of why. This line is all about quality work and good value, and after adding over two dozen of these to my collection, I’ve only been let down by a couple. Unfortunately, I’ve had to reel myself back in a bit, because my collection of these has been getting out of hand and quite frankly I ran out of space to display them a long time ago. Gwen here set me back $40 for the Exclusive, and about $10 of that was shipping, so I certainly can’t complain about the price. I would only recommend that if you’re in the market for her, you hit up some GameStops and try to find her on the shelf. Not only will you be able to check the paint, but you can avoid having Think Geek send you one with a crunched box. She is up on Amazon right now, but at around $55 she’s going for a premium.

One comment on “Marvel Gallery: Gwenpool (Unmasked) by Diamond Select”