How many waves of Marvel Legends am I behind now? I think it’s like four or five, but I’m trying not to actually look because it’s only going to depress me. These figures seem to be selling really well here, because I keep finding remnants of the more recent waves on the pegs. Hopefully that’s making up for the tons of figures from the first Guardians of the Galaxy Wave that got re-ordered for the second movie and are clogging up the clearance endcaps at my local Target. Anyway, you might say I got lucky on my last trip through and found a lone Domino swinging on the pegs amidst some pieces of the Thor: Ragnarok Wave. And since I just bought my tickets for Deadpool 2 on next Thursday, I’m pretty pumped to look at some Deadpool content.

Domino is part of the second Deadpool-inspired Wave, which is obviously cashing in on the new movie, without actually including any movie-based figures. Part of me is sad that we aren’t seeing any movie figures, but then I see the great comic-based characters we are getting and I don’t mind so much. Also, Hasbro is using this wave to give us a huge Sasquatch Build-A-Figure, and that certainly cheers me up! And as someone who has always crushed hard on Domino, I was thrilled to see her included in the assortment! 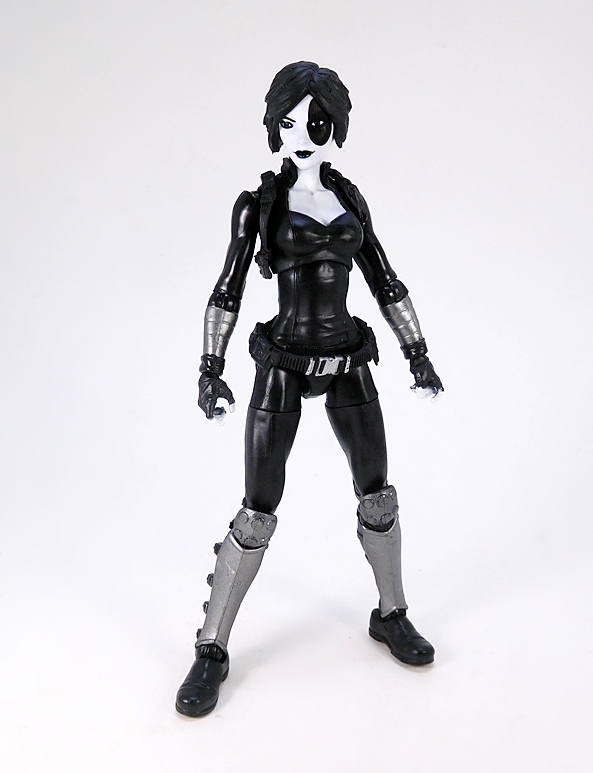 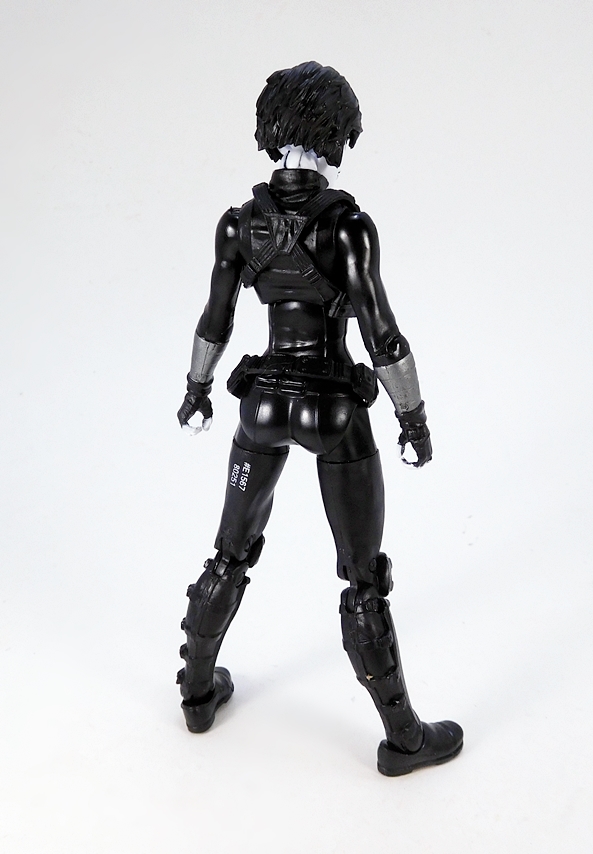 And here she is! Domino comes all decked out in her tight 90’s-era black cat suit and looking absolutely fabulous. There are any number of previous female Legends that Hasbro could have raided for this buck, but with the figure in hand, I’m not recognizing any of them. Granted, I’m not the best person at spotting recycled parts, but I do believe what we have here is a new sculpt. The nearly all black buck features some subtle details, like the tailoring seams in the suit, and some not so subtle like the knee and shin armor and arm bracers. She also has sculpted straps and buckles holding on the leg armor and a belt sculpted onto the buck. Additionally, Domino comes with two separate sculpted pieces, a very detailed belt that hangs on her hips, and a shoulder rig, that doesn’t seem to serve much of a practical purpose, but definitely adds to the figure’s aesthetics. As one might expect from the character, there isn’t a lot in the way here of coloring. What you do get is some silver paintwork on the leg armor, bracers, and belt buckle. Her hands also feature finger-less gloves with the exposed fingers painted on.

The head sculpt is definitely a big win for the figure. The face sculpt is very pretty and captures so much of what makes me so smitten with Neena. The short hair is sculpted from a separate piece to give that extra convincing bit of depth in the way it frames her face. She has her trademark black spot around her left eye and some dark electric blue paint for her lips and pupils. This is a great looking portrait! 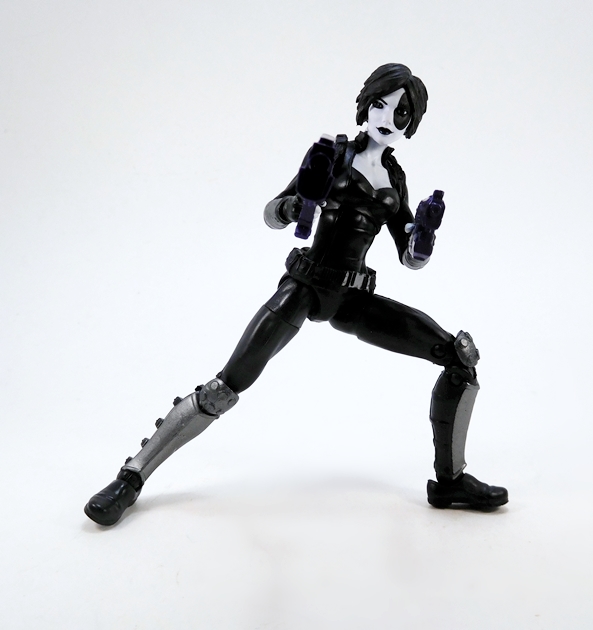 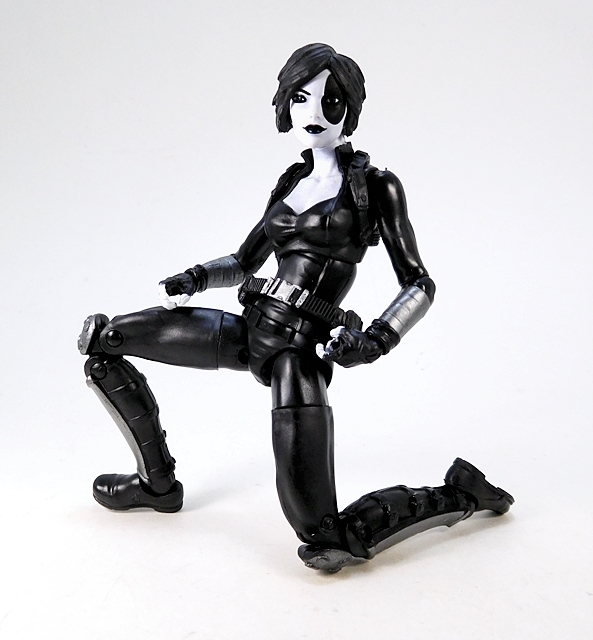 Articulation is the only place this figure falls short, and I mainly say that because Hasbro still refuses to give the Legends ladies double hinged elbows. Sometimes it’s not a huge deal for me, but I really wanted them here on Domino. The rotating hinges allow for the arm to bend 90-degrees at best. Serviceable, but at this point, it’s just not fair that the dudes are getting the better elbows and the chicks are getting the shaft. Otherwise, the arms feature rotating hinges in the shoulders and wrists, and no bicep swivels. Grrr. The legs are ball jointed at the hips, have double hinges in the knees, and swivels in the thighs. The ankles have hinges and lateral rockers, there’s a ball joint under the chest, and the neck is both hinged and ball jointed. 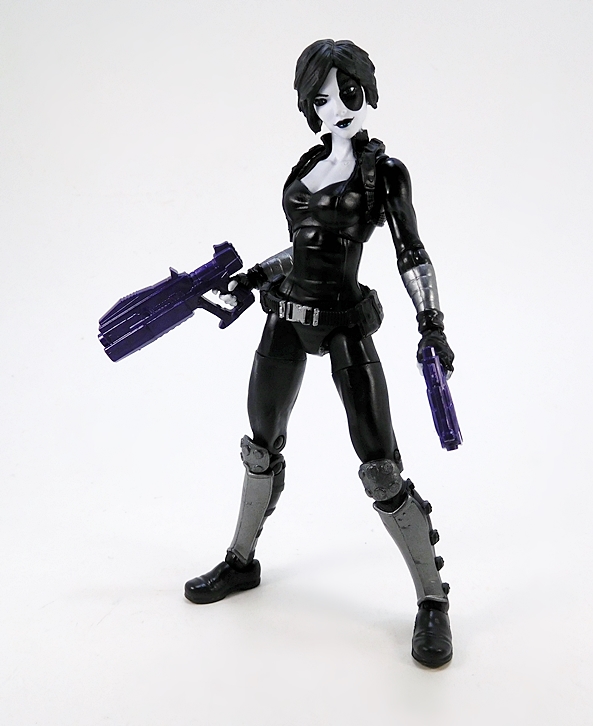 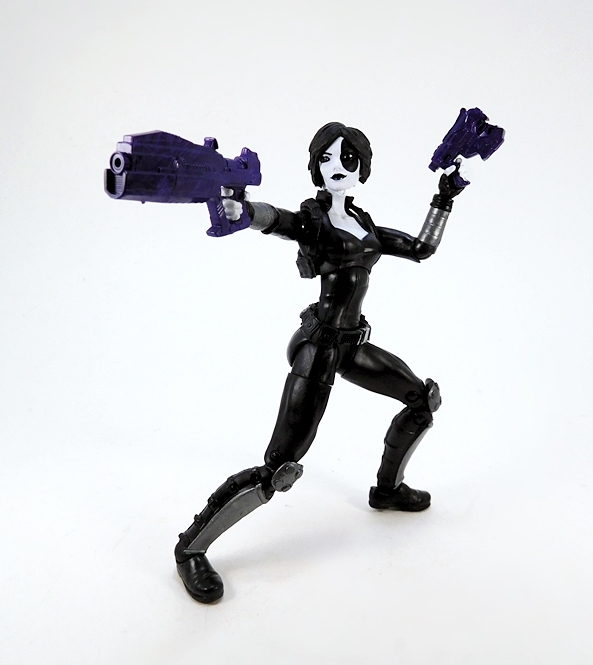 Domino comes with two weapons, both of which are very purple and very sci-fi-y. Neither of these things would have been my first choice. I would have much rather had some realistic guns cast in black or gray, but these aren’t terrible. The sculpts do have a lot of nice detail to them. Unfortunately, she can’t hold the pistol terribly well and it tends to droop a bit in whichever hand I put it in. Also, it would have been nice to give her a way to wear these, or at least the pistol. A hip peg on the belt and another on the back of the shoulder rig would have been most welcome. 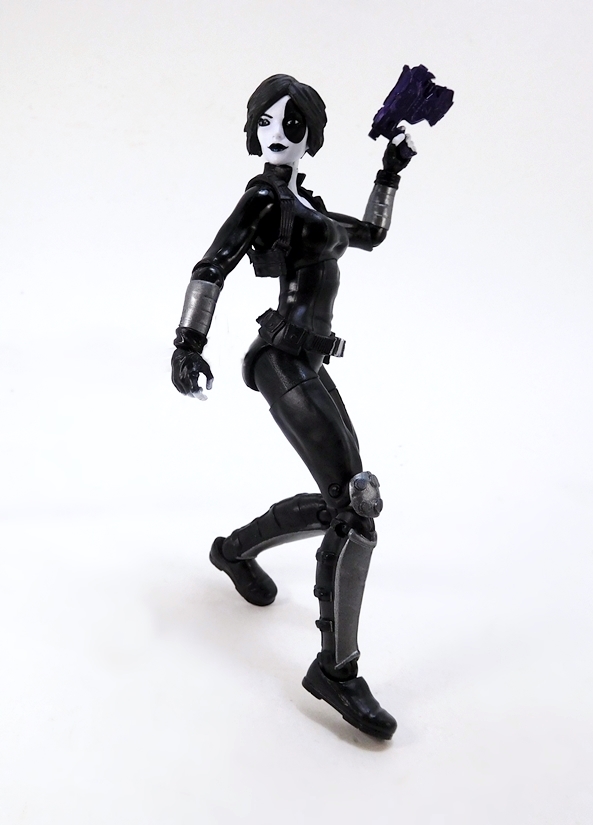 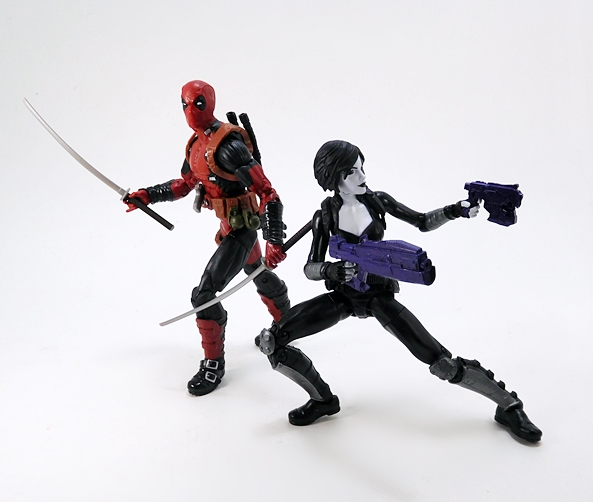 Nitpicks aside, I am absolutely in love with this figure, which most certainly was not a given. When I dig a character as much as Domino, I’m always afraid of being disappointed when that character’s figure rolls around. Sure, the elbow articulation is a sticking point with me, but that’s been the case with a lot of the Legends gals, so I’m not going to single out Domino over it. Truth be told, when it comes to everything else, I think they really nailed this one, so much so I’m thinking of picking up a second just to keep boxed. I’m excited to see what Zazie Beetz does with the character in Deadpool 2, but from the little snippets I’ve seen of her in the trailers I’m not too worried.