If you follow me on Twitter, then you know I was Tote Diving a bit last week, looking for stuff that I didn’t need to free up some space. It was largely unsuccessful, because most of the stuff went back into the tote, but I did find a few items that are going to be leaving my collection. One of them is Optimus Primal from the Transformers Universe line, and since I never reviewed him here, I thought I’d remedy that before he goes off to another home. Besides, there hasn’t been a lot of Transformers content around here lately, so I’ll take every chance I can get. So, let’s dial the Wayback Machine to 2003…

And here’s a really old picture of him in his box. Universe was a strange line, populated entirely by repaints of existing molds, sometimes introduced as new characters. The fiction for the line suggested that these were characters being pulled together from all ends of a Transformers Multiverse. In some cases it brought back toys that had been off the shelf for a while, like Primal here or the Machine Wars version of Starscream as King Atlas. It was a cool idea, and if Hasbro had stuck with using the older toys, it could have been something special. Unfortunately, it tended to favor repaints of a lot of recent releases, and as a result, I don’t think this line really reached its potential. Let’s start with Primal’s gorilla mode!

When it comes to Beast Wars, I was a big fan of the show but only dabbled in the toys. This is actually the first time I’ve owned this particular mold and I was pretty surprised by how much I liked the gorilla mode. Sure, it’s got lots of seams and exposed hinges, and stuff like that, but it’s still a decent looking and most of all fun toy. The sculpted fur is pretty well done and the face has a lot of personality, making Primal look like he’s about to put a Predacon’s head through the nearest wall.

This is a complete recolor of the original toy, so even the plastic used for his gorilla body is different. Here it’s more of a chocolate brown, where as I believe the original was darker brown. You also get some green in the upper arms and upper legs. The gray and white parts from the original toy have been replaced, and I think all in all this deco looks quite good. There are some areas of exposed yellow plastic, but they’re not very prominent, at least not in the gorilla mode.

There’s a lot more paint on the head and face this time around. What was orginally just a gray face, blue eyes, and white teeth has been jazzed up with some white and silver paint that starts around the eyes and runs up the top of his head and down the back. The red around the eyes is unevenly applied, I presume intentionally. He’s got yellow eyes, a tan mouth and nose, and white teeth. I like the paintwork here a lot, and I’d argue that it looks a lot cooler than the original, but given my druthers, I would have been just as happy if they offered this level of paint detail but kept the original deco.

Because the beast mode uses the robot arms as the beast arms and robot legs as the beast legs, you get the same level of articulation. Although in beast mode, Primal is mainly intended to be hunched over in a normal gorilla fashion. He does have a gimmick which allows him to pound his chest by working the rather enormous lever on his back. This action causes the arms to move in an alternating fashion. Fun, but probably not worth having to look at the ugly lever. Another cool gimmick is the ability to deploy a pair of shoulder mounted missile launchers with the press of a button located just above his ass. What can I say? There’s just something about a gorilla with hidden missile launchers that tickles me. Let’s move on to his robot mode…

Because the beast mode and robot mode share the same limbs, transforming this guy is pretty simple and from memory, it’s pretty accurate to the transforming animation on the show. I really dig the robot mode here, which is pretty well proportioned and just looks like a powerful bot. The deco remains largely the same, although you do get some more yellow in the legs. I like the hydraulic arms that come out of the legs and attach to the feet, and the way the gorilla mode’s upper arms fold out into shoulder armor is pretty rad as well. The blending of robot with organic curves and sculpted fur certainly makes for a rather distinctive look that only Beast Wars could pull off. About the only thing here I’m not overly fond of is the rather ugly chest piece. It’s cool how the gorilla head flips inward, but they really needed a plate or something to cover that shit up.

The head sculpt is not at all show accurate, but I do like it. It’s basically just a big-eyed Optimus Prime with a red “helmet” instead of a blue one. He has a rather exaggerated crest in the middle and his usual pair of ear headphones with antenna sticking up. The paint they used for the blue eyes looks great and manages to capture an illuminated look in the right light. The silver used for the mouth-plate is also quite striking. Of course, if you prefer your heroic Maximal leader to look like a goddamn monster… just flip the head around…

…and you get the Mutant Face. Now don’t get me wrong, this is a very cool looking sculpt, but this gimmick went nowhere in the toyline and I’m kind of surprised Hasbro left it on for this toy. Maybe it was just more bother to take it off. Funny, but as ugly as it is, it almost has a Bayformer quality about it. Let’s move on and check out some of Primal’s armaments.

You can still activate the shoulder launchers in robot mode and this is still my favorite thing about this figure. Those babies must really come in handy in a fight. Want more missiles?

You got it! Primal’s left hand splits open to reveal two more missile-spitters. The only downside here is that you have to load them up after you deploy them, so if you want Primal to be a fast draw with these weapons, you’ll have to rely on your imagination. Still, plenty cool though! And hey, missiles are all well and good, but sometimes you want a weapon with a little personality. Something that really personifies a heroic Maximal Leader… 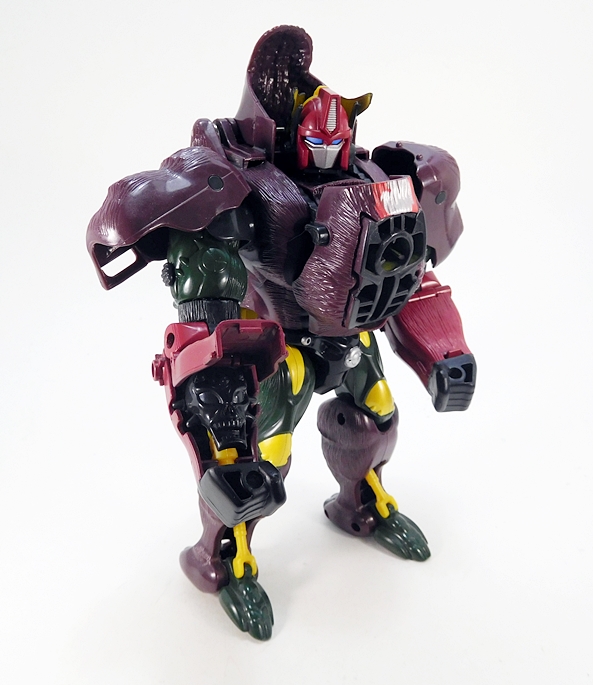 …like a goddamn skull mace hidden in your right arm. Holy Primus, what were these people thinking? This has got to be one of the most bizarre weapons I’ve seen on a Transformer. It’s certainly rather uncharacteristic for the Primal I know. How about some swords?

Primal also comes with these curved swords, which I guess are a little more nobler than bashing someone’s head in with a skull at the end of a rope. Here’s where I point out that the missiles, swords, and the handle for the flail are all cast in a rather obnoxious yellow plastic. It wouldn’t be my first choice, but Hasbro used a lot of crazy colors in this line, making some of these repaints a little over the top. 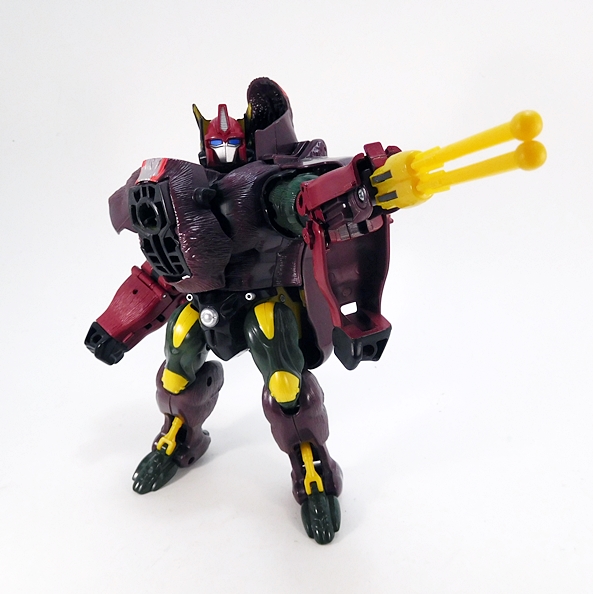 Optimus Primal is an excellent toy and this Universe repaint is pretty solid, but he’s one of those figures that just doesn’t fit in my collection any more. Over the years, I’ve parted ways with all my favorite Beast Wars figures, like Inferno and Megatron. Even the Generations versions of the Beast Wars characters didn’t hang out in my collection that long. And so too, it’s time for Primal to move on to a new home. It’s the circle of collecting life and his sacrifice will make room for more Transformers. Assuming I actually find any of the newer Power of the Primes figures around here, because they sure are going for some crazy prices on Amazon right now.