I didn’t set out to start collecting Phicen figures. The gateway purchases for me were their Zenescope figures and I had no intention of going any further. But I was so impressed with them, it lead to another and another, and now it seems like I’m pre-ordering these ladies on a regular basis. That wouldn’t be so bad if they weren’t revealing what seems like a new figure every month. And today’s figure is a bit of a milestone, as its my first Phicen figure that’s not based off of a comic book property. Nope, Athena is just an original design based loosely (OH, SO LOOSELY!!) on the Greek warrior goddess, Athena. Oh yeah, and I should note that while Phicen is now officially known as TBLeague, I still tend to use the two names interchangeably.

Athena comes in what has become standard packaging for TBLeague figures, which consists of a shoebox with a tri-fold cover that connects to the sides of the box with magnets. Both the box and cover are made of sturdy, durable cardboard, and as I point out almost every time I review a Phicen, the packaging here feels vastly more premium than the packaging used for most of the Hot Toys or Sideshow figures in my collection. The tri-fold cover features some excellent artwork on the front and sides, and the back panel of the box has shots of the figure itself. 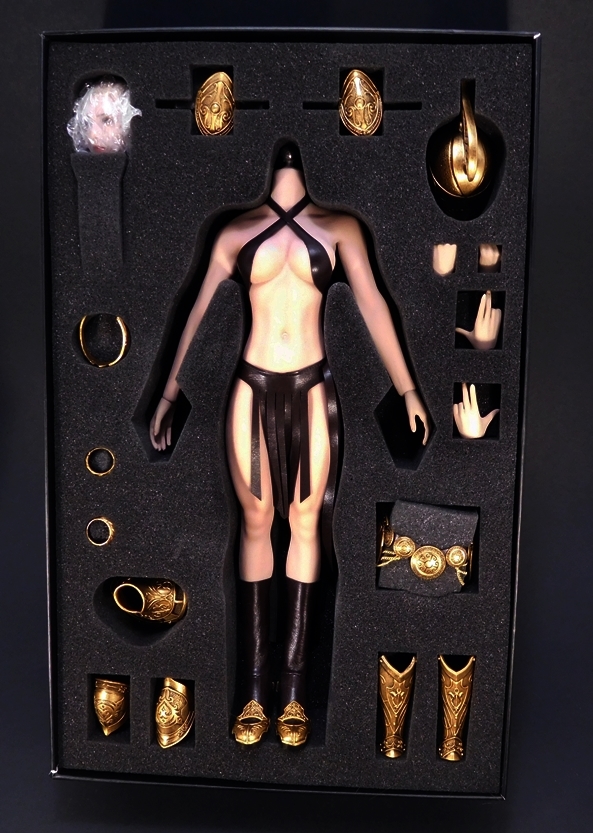 Inside, Athena comes nestled in a foam tray with all of her accessories laid out around her, with a second tray and more goodies under that one. And let me tell you, this figure required a lot more futzing than any of the previous Phicens I’ve purchased. As usual, you have to attach the head, which is no big deal. But beyond that, the figure comes wearing only her boots, top, and skirt. All the individual armor pieces have to be attached and that amounts to 11 pieces, not counting the helmet. The majority of these pieces are secured with elastic straps, and while some will just slide on, others require you to work with teeny fasteners. And yes, some of these pieces feel delicate, and don’t forget you’re dealing with a soft-skinned figure that does not react well to being poked and prodded. I’ll admit it, setting her up was quite the chore.

But, I’m happy to say that it’s all worth it, because once Athena is all kitted out, she looks absolutely stunning. Originally, I wanted to shoot her as I added the various pieces of armor, but it was so much work getting it all onto her, I have no plans to take any of it off again, so let’s just start at her feet and work our way up. The calf-high boots are made of a leather-like material reinforced with sculpted gold pieces on the heels and toes. The shin armor are made of somewhat pliable plastic and simply clip on. They hold on surprisingly well too! The knee armor is held on with actual straps, and while they have a habit of slipping around when bending her at the knees, they’re not too bothersome. 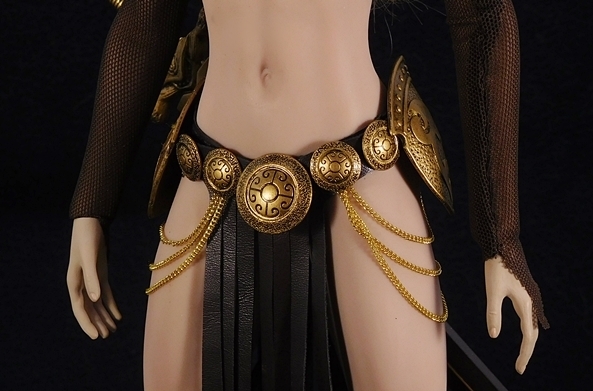 The skirt consists of individual strips of brown leather-like material hanging down to cover her front and back nether-regions. On top of that goes a separate belt made of the same material, with ornate gold discs, like mini shields, on the front and back, as well as larger hip plates and some golden chains that hang down over her thighs. I really dig all the little etching on the individual discs and there’s a cool sculpted pattern that makes them look like they’ve actually been hammered out of metal. Athena’s arms feature a pair of bicep rings, plus some mesh sleeves, which are totally optional, and I keep waffling back and forth over whether to keep them or not. In the promo pics, the flaps that extend over her hands are supposed to loop around one of her fingers, but there’s no actual hole to do this, and I’m a little afraid that if I try to make one it’ll tear.

Her chest covering consists of two strategically placed leather-like straps that cover her “nipular” areas and criss-cross just before looping around her neck, while the other ends pass under her arms and across her back. The shoulder armor pieces were the hardest to get onto her. These are held on by elastic straps with tiny buckles and a snap that attached them to the shoulder. Getting anything to slip all the way up a Phicen’s arm is tough, because the realistic skin offers a lot of resistance, and these had to go all the way up to the top. I tried unfastening them and fastening them in place, but that proved to always result in the armor piece unsnapping from the strap, so I had to do it the hard way. Finally, there’s the gorget, which curves up to encircle her neck and has a few ornamental chains that hang down betwixt her bosoms. That’s right, I SAID BETWIXT HER BOSOMS! Anyway, despite the fact that all this armor is worn by the figure like real armor, the bulk of it stays put quite well, and didn’t cause a lot of problems when I messed around with her.

The head sculpt is extremely pretty and I have to give credit to Phicen for how far they’ve come with their portraits. It’s hard to compare this head to a Hot Toys sculpt, because it’s not based on any famous actress’ likeness, but the realism is pretty damn good. The contours of the face are smooth and elegant. I love the glossy paint used for her lips, as it looks realistically wet. The paint for the eyes is extremely close to capturing that surreal spark of life that Hot Toys grants it’s figures. Athena sports a long mane of golden rooted hair, and while it’s common to get some flyaway strands, this gal’s coif isn’t too hard to manage, and you don’t have to be a professional hairdresser to make it look good. Her tiara is a separate piece and when Athena goes into battle, it can be swapped out in favor of her helmet. 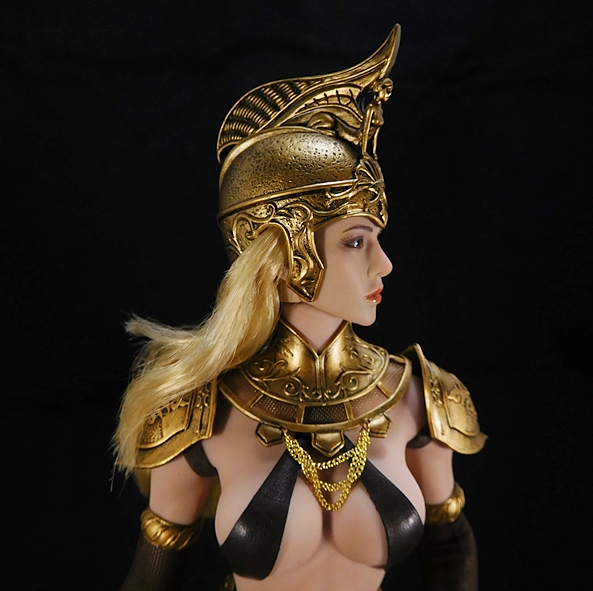 The helmet goes on very easily, thanks to the slightly pliable plastic used for the cheek guards. The hardest part is getting her hair to sit right under it, but just bunching it all up and pulling it to the back seems to do the trick. The sculpted decorations on this piece are beautifully done, with raised scroll-work on the cheek guards, a decoration that kind of resembles an upside down Fleur De Lis. The dome has a hammered finish similar to some of the rest of the armor pieces, and the crest sweeps up majestically in the front. Probably my favorite aspect about the helmet is the figure seated under the crest. It’s a half-woman, half-animal (possibly winged) sitting on her hind legs and pushing up with her arms. It really adds to the timeless fantasy design of this figure.

Athena comes with a handful of cool accessories, as well as three pairs of hands. The hands include a relaxed pair, a pair with two of her fingers pointing, and a pair designed to hold her accessories. The first of these is her sword, which comes in a scabbard. The scabbard is molded plastic and features some gold decorations and a chain to hang it from the belt, but I couldn’t find any specific place to put it, so I wound up just looping it around the belt before putting it on her and having it hang down behind her legs. It looks good, but it’s a little awkward when posing her. I would have rather just had a clip on the belt to attach it to. 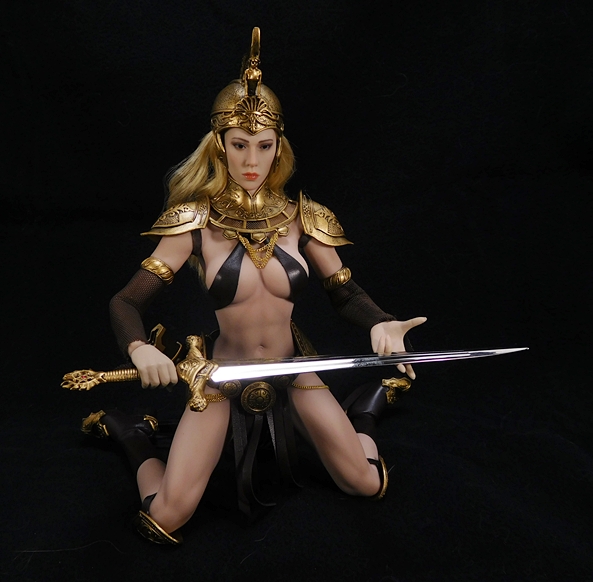 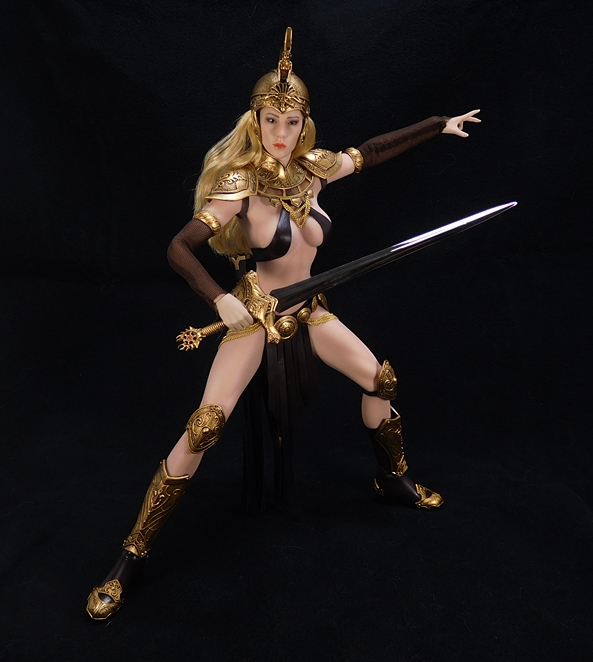 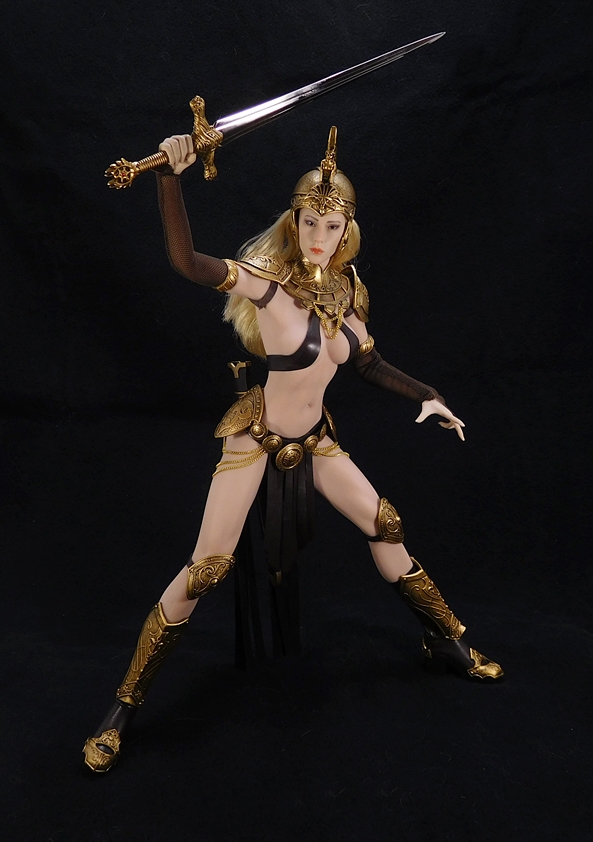 The sword itself is beautiful but it strikes me as more medieval in design than Greco-Roman. It has a cruciform hilt with a rather large pommel and straight cross guard. The blade is made of die-cast metal, giving the weapon a nice heft, and it tapers pretty sharply to the point, giving it a late medieval flavor. It also has a snazzy mirror polish to it. Part of me wishes that they had given her a more appropriately designed sword, but it’s not a deal-breaker for me and it is a fantastic looking piece. 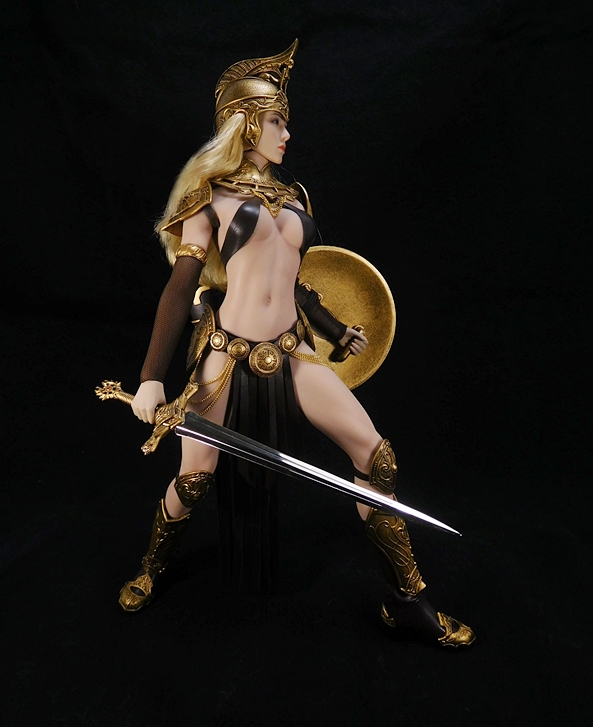 The shield, on the other hand, reels it back in with a more solid Greek design. It’s round with a familiar Greek pattern running around the edge, sculpted bolts reinforcing the next ring, and a beautiful sculpted relief of Medusa’s face framed by a fury of snakes. The shield is molded in plastic and has a sumptuous gold finish that matches the rest of Athena’s armor pieces. On the flip side, the shield includes an elastic strap to go over the arm and a grab bar. Getting her fingers around the grab bar can be a chore, but once it’s on there she holds the shield very securely. I’ve also found that the relaxed hand offers enough support to hold the shield in poses where the elbow is bent. 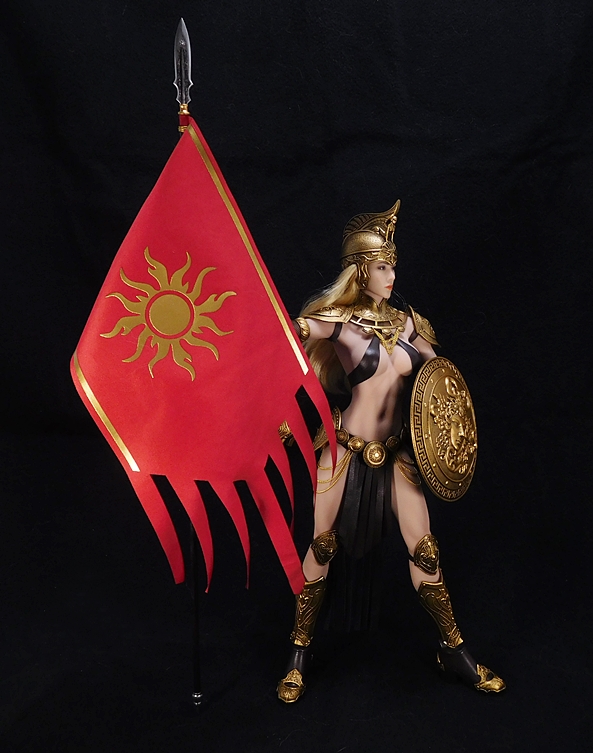 Next up is Athena’s battle standard, which is secured to a spear. The spear itself has a silver spike butt cap and a broad bladed tip. There’s a ribbed grip up near the tip with gold painted rings where the flag secures to the shaft. The flag is made of a semi-stiff cloth material that shows off the gold sun emblem and gold borders. Now, I’m no expert on the standards used by the Greeks, but like the sword, this accessory looks a bit more medieval to me. Whatever the case, she looks great holding it. 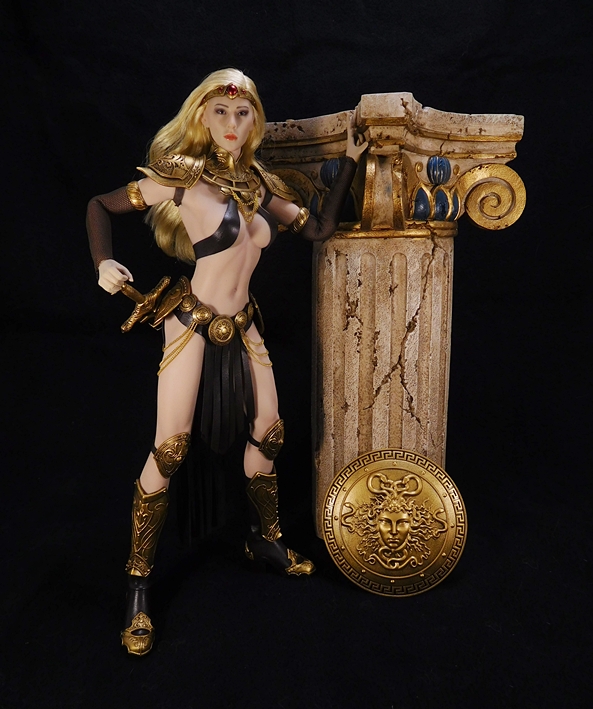 And last, but certainly not least, Phicen has been pretty generous with bundling some truly impressive diorama pieces in with their figures, and in this case Athena comes with a huge antique column, which can be used as a display stand. This is a hefty and beautifully crafted piece with some realistic weathering and some blue and gold paint around the decorations. It also stands almost as tall as the figure herself. The top surface is studded with pegs, yes Phicen equips these figures with peg holes in the feet so they can be secured onto a base or stand just like most 3 3/4-inch and 6-inch scale figures. The problem is that to display Athena on this stand, I’m now looking at a required 24-inches of clearance on my shelf, and I don’t really have anyplace right now to accommodate her. 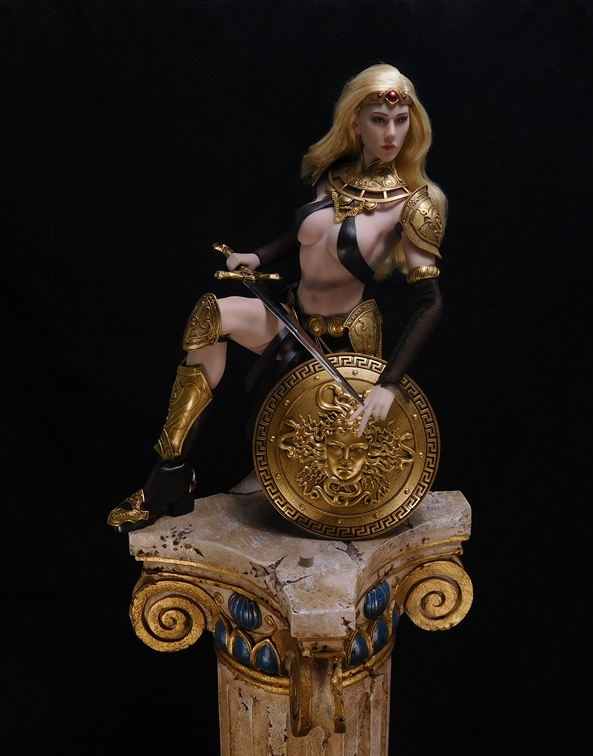 Fortunately, the column looks pretty good when tumbled onto its side as well, and I may wind up just displaying Athena reclining on it or climbing on top of it. 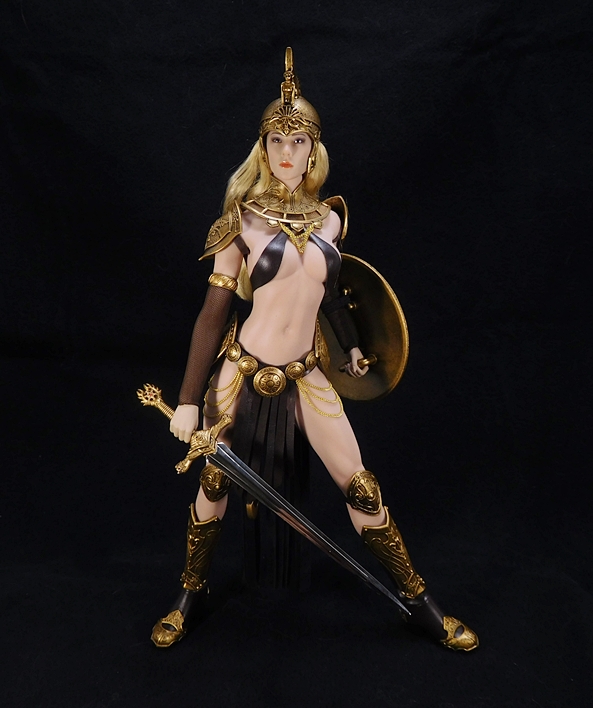 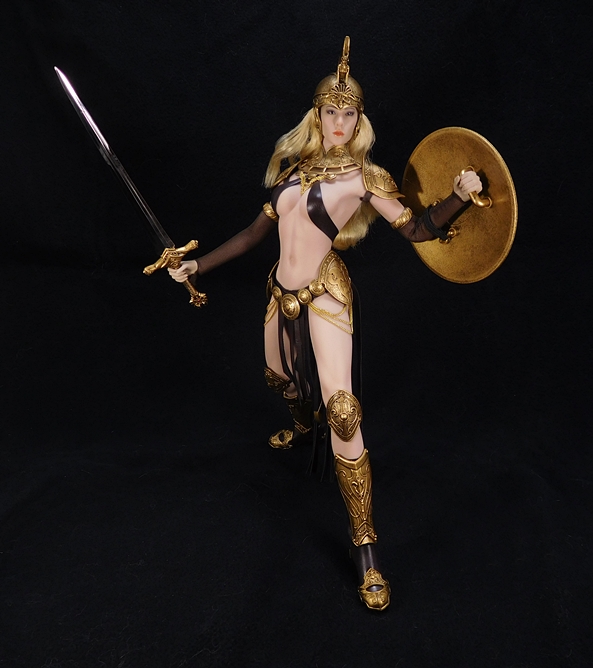 While I was originally content to stick with just the comic-based figures, TBLeague’s original designs have been getting better and better and I just got to the point where I couldn’t resist any longer. And I’m certainly glad I didn’t, because Athena is a stunning figure with some beautifully designed armor strategically designed to show off the Phicen body. Sure, some aspects of the design aren’t exactly seated in any sense of historical accuracy, even if some promotional materials are suggesting that it is supposed to be the Goddess of Wisdom and War. There are certainly hints of Greco-Roman design here, but I wholeheartedly believe that this figure is best enjoyed as a fantasy figure straight out of one of those old Pepla (Sword-and-Sandal) flicks, and that perhaps her name is just given in reverence to the mythological Goddess. Regardless, Athena retailed for $170, and considering the craftsmanship and extras, I think the value is certainly there, especially in a market where even the less revered companies are putting out sixth-scale figures in the $200+ range.