And now, the end is near… and so I face the final curtain… The only thing sadder than a show you love coming to an end is when there’s an attached line of action figures that goes down with it. As all fans must know by now, Starz Network opted not to renew Ash V Evil Dead for a fourth season, and as a result will forever go down in history as a bunch of shitheads. At least in my book. Anyway, it’s safe to assume that this second wave of AvED figures from NECA will also be the last. Oh, we’ll still get some Evil Dead figures from the films, but now the chances of ever getting figures of Ruby, Kelly, and Pablo are lower than a flying Deadite eyeball not landing in someone’s mouth. I’ve already looked at Asylum Ash and the Demon Spawn from this wave, so let’s wrap it up today with a look at Henrietta. 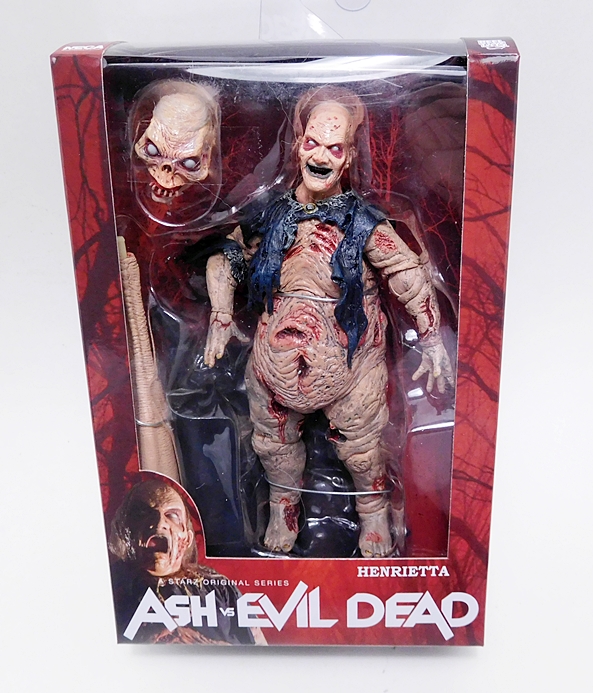 The figure comes in the same style window box as the rest of the figures with a creepy red and black tree motif and some character art specific for the figure. AvED was pretty damn good about not constantly retracing the material from the films. Indeed, this series introduced more new elements to the Evil Dead lore than I could have imagined. But every now and then they threw the fans a bone, and thus we saw the Deadite Henrietta make her glorious return at the end of Season 2. Give me a minute to get her open and I’m going to change the backdrop to something a little creepier. 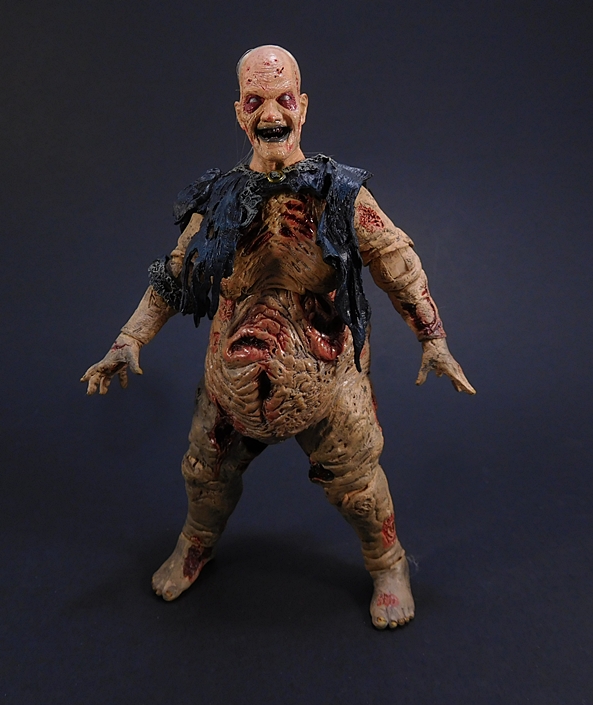 Ah, that’s better! And wow, is she disgusting! Every time I see Henrietta I think about poor Ted Raimi pouring gallons of sweat out of this massive latex suit. Talk about suffering for your art! And yes, he reprised the role in the series, which I think was awesome. This release is NECA’s second crack at a Henrietta figure with the first one being from Evil Dead II. I don’t own that figure, but from pictures it looks like there may be shared parts here, but plenty of new stuff as well. Every inch of Old Mrs. Knowby is covered in gross, from her nasty toenails all the way up to her nearly bald head. The body is bloated, the skin is mottled, and there are sores all over her. There are parts of her skin that look like it’s ready slide right off, and you can see her ribcage beginning to manifest between her saggy dead-gramma breasts. Even something as simple as her naval is a deep, dark abyss that looks like it’s about to open up and spill her entrails all over the floor. Of course, all this is just another way of me saying, I freaking love this sculpt!!! 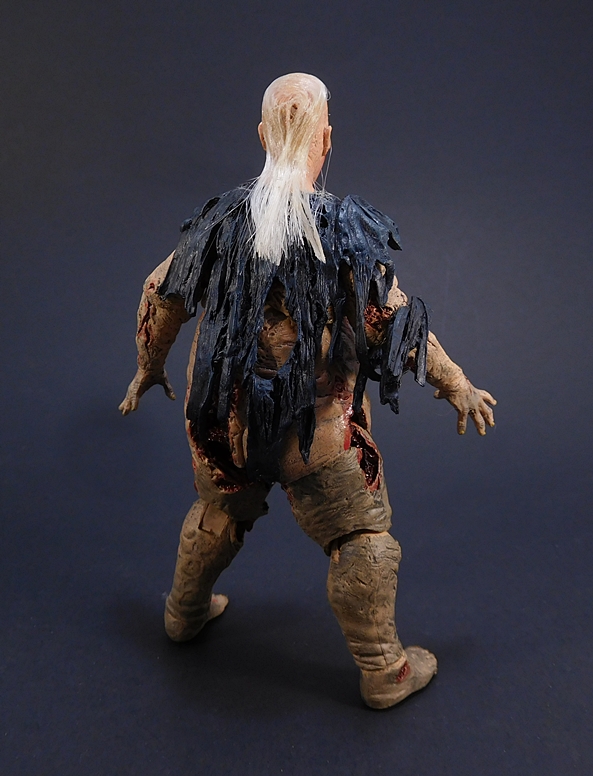 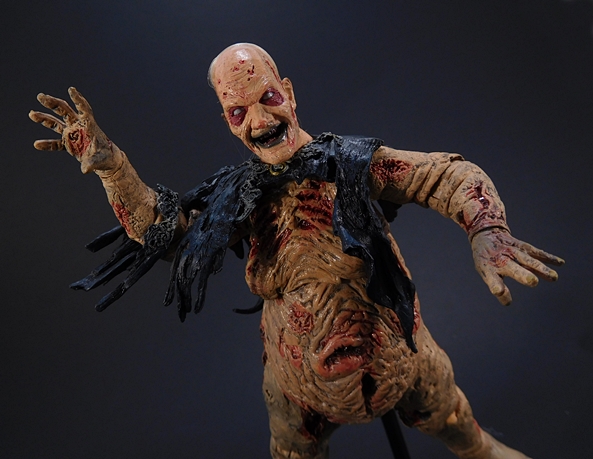 From the back, things aren’t much better. In fact, she’s got a gaping chunk taken out of her left buttcheek, revealing the wet, red insides. As great as the sculpting is, the paint is also there to back it up. The bulk of the figure’s limbs have a matte old leathery finish that I can only assume came out of a jar labeled “necrosis brown.” Other parts of the skin are painted with a gloss to show that they’re the juicier bits. And all the open sores are finished off with more of that glossy wet red. Just beholding this figure is enough to put me off roast beef for a while. And while Henrietta doesn’t have much to cover her Deadite modesty, she does have the shredded remains of her house dress, which she wears almost like a cape, and is sculpted separate from the figure. I particularly love the detail in the broach that holds it in place around her neck. This is such beautiful work! 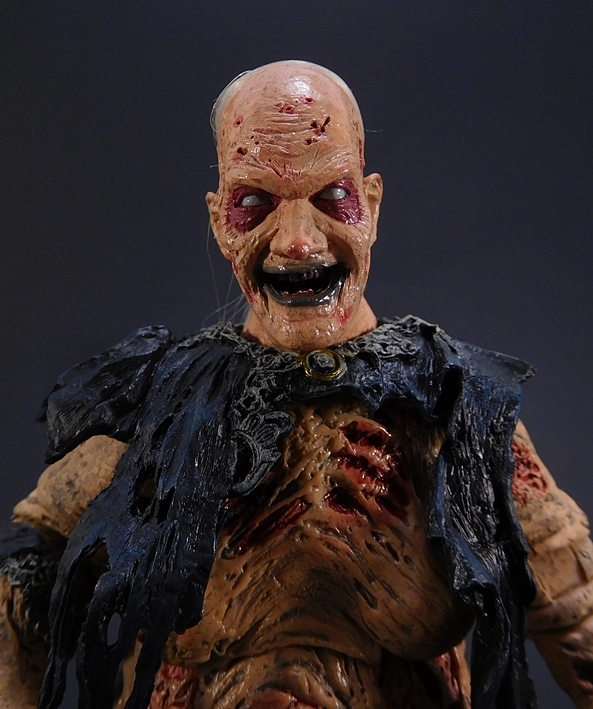 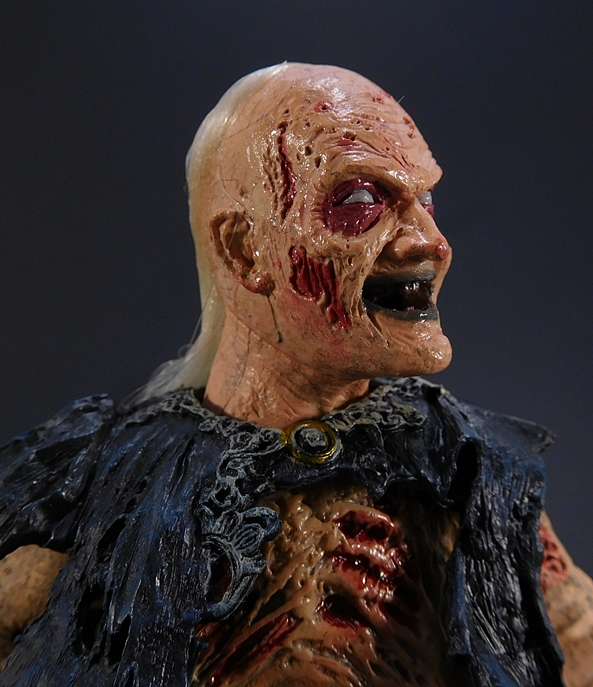 The head sculpt is pure magic. Dark, vile magic, but magic nonetheless. Henrietta is no doubt one of the most distinctive and familiar of the Deadites and they captured the look of the on-screen makeup brilliantly. Her black lips are parted in a jovial smile as if she can already taste your soul. I love the raw, red skin around her eyes and the eyes themselves are clouded over white as Deadite eyes are apt to be. The head features all sorts of nicks and cuts, some bloody and others that look like they’ve already bled out. She’s also missing some cheekmeat. And that’s your word for the day, kids… cheekmeat! But as good as all that is, the crowning achievement here is that NECA took the time to give her paltry gramma coif actual rooted hair. God bless you, NECA! 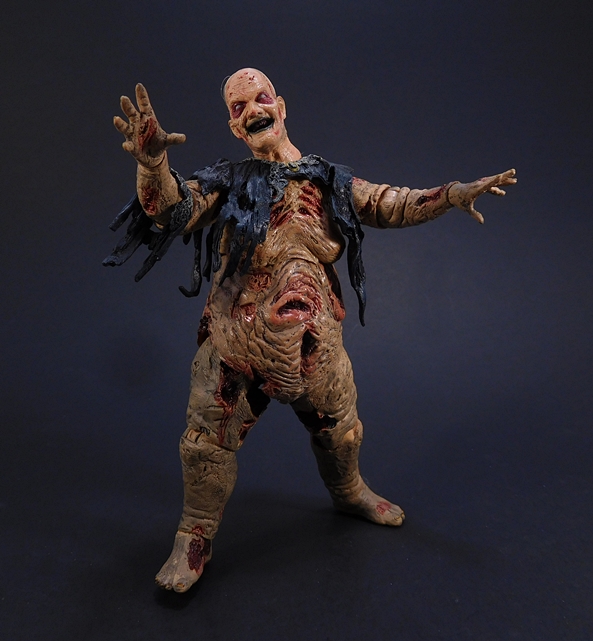 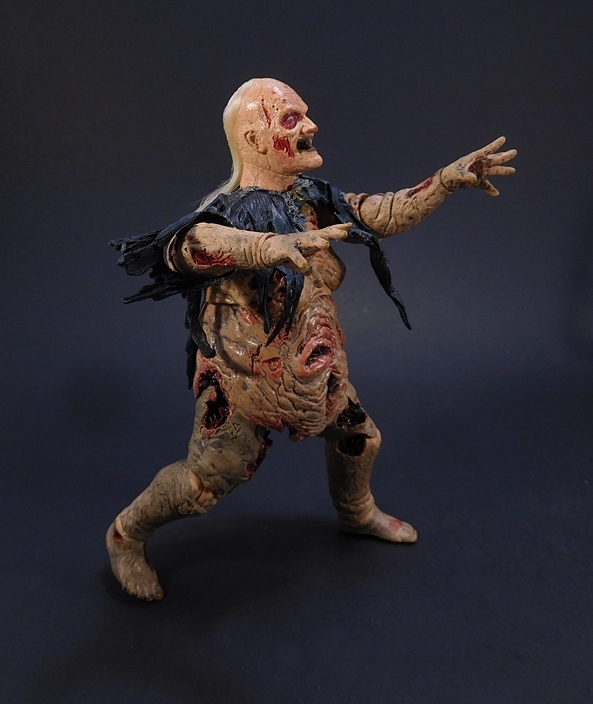 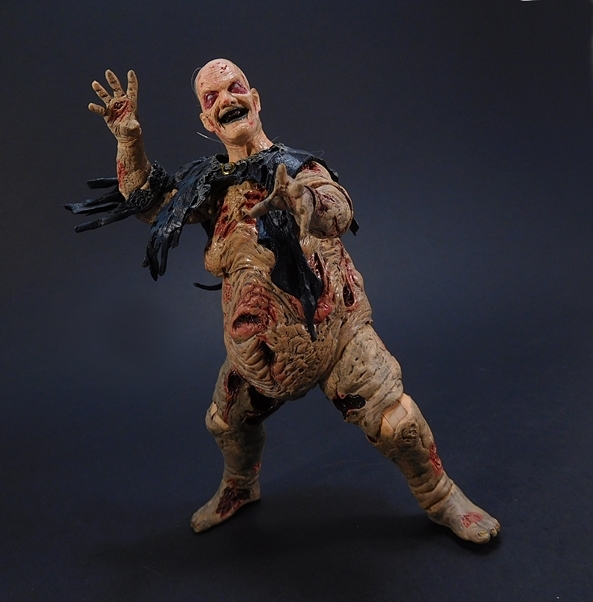 We’ve seen other companies do figures like this with a few swivel cuts and call it a day, but Henrietta has several useful points of articulation. Now, I’m not saying the old girl is going to be posing like a goddamn ninja, but she does feature rotating hinges in her ankles, knees, hips, shoulders, elbows, and wrists. So you can say she’s pretty spry for an old undead granny. She also has a ball joint buried under all that bloated flesh, and a ball joint in her neck. Granted, some of these joints don’t have a big range of motion because of the sculpt, but I’m happy with what I can get her to do. Ah, but NECA didn’t stop there… how about a really long neck and an extra head to go with it? 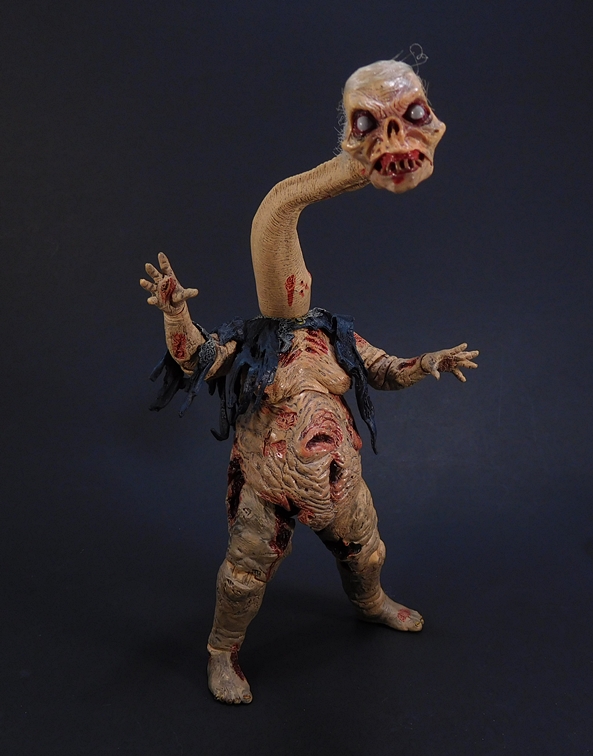 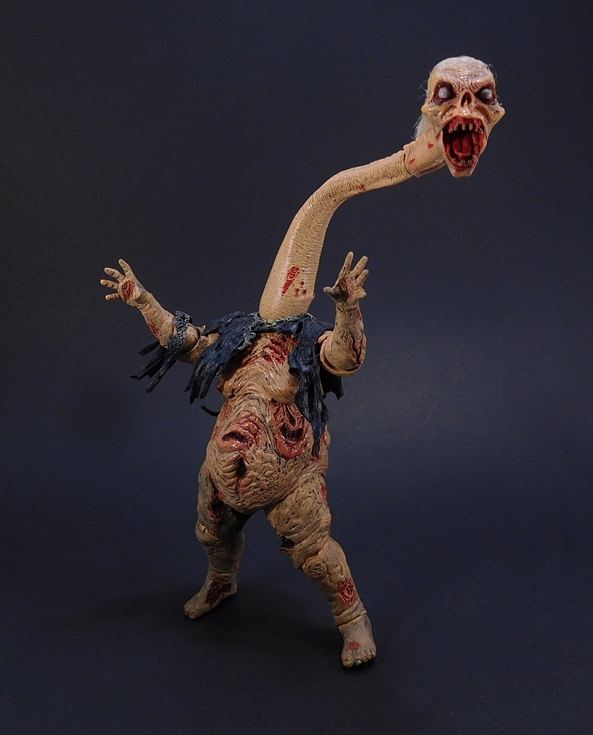 Oh yeah, that’s what I’m talking about! Pop off the regular head, pop on the bendy neck and pop the new head onto the end of it, and you’re all set to elevate Henrietta to that whole new level of weird. It was a stand out scene in Evil Dead 2 and it was wonderfully recreated in AvED Season 2. 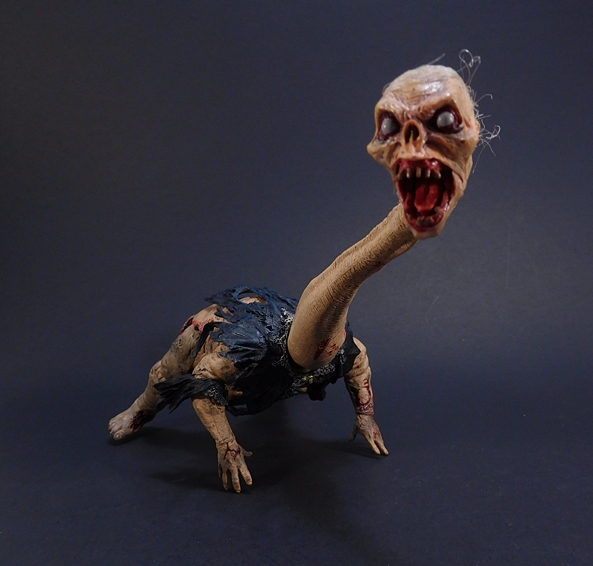 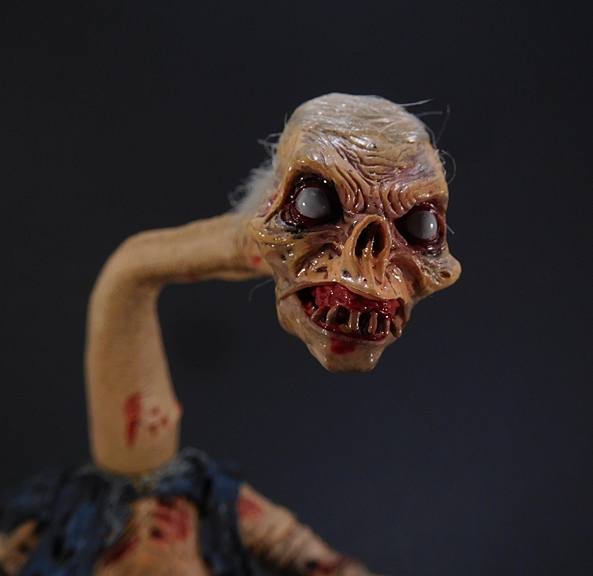 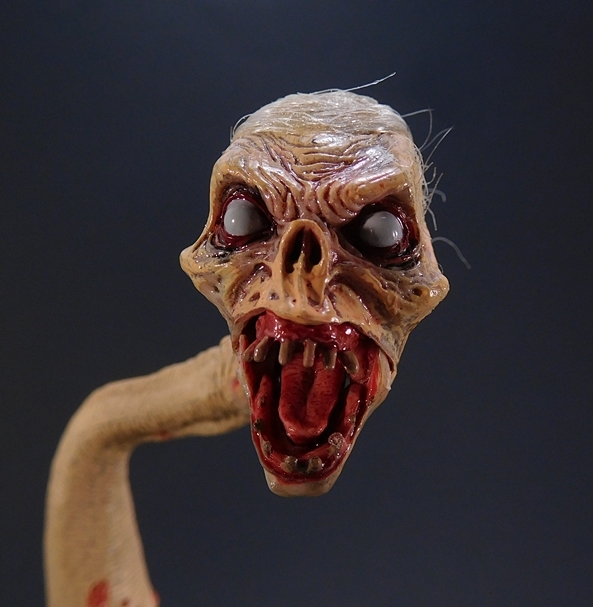 The head is that perfect marriage of terrifying and goofy. It’s got more of a glossy finish and it also has a shock of white rooted hair. Plus, they actually gave this head a hinged jaw, which is just priceless. 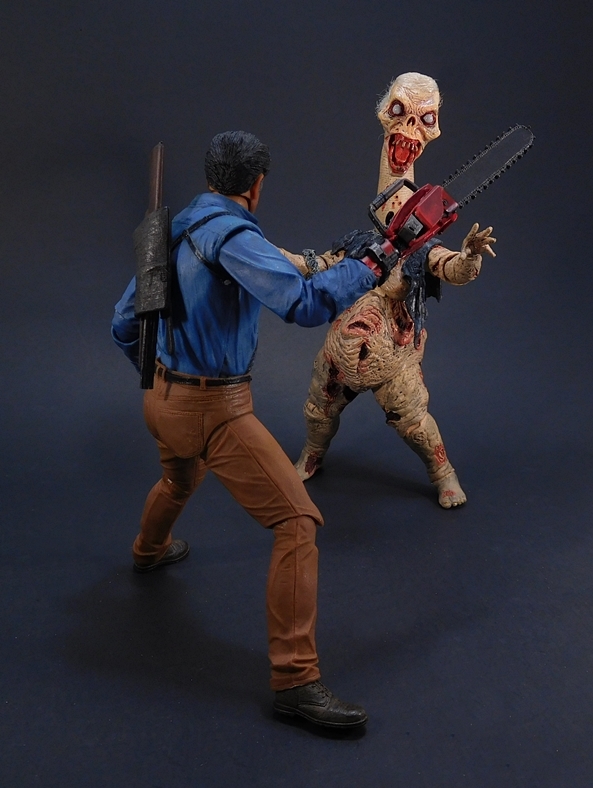 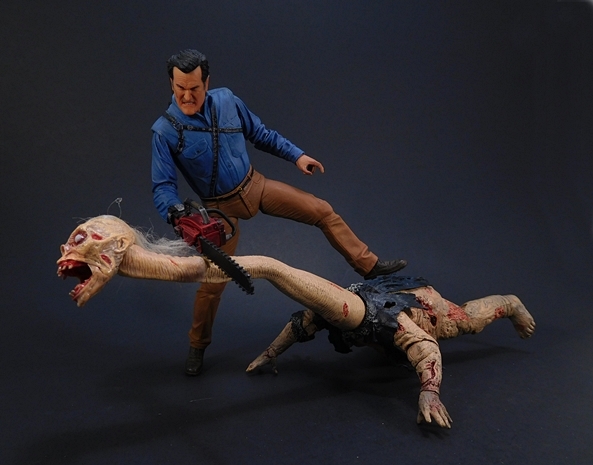 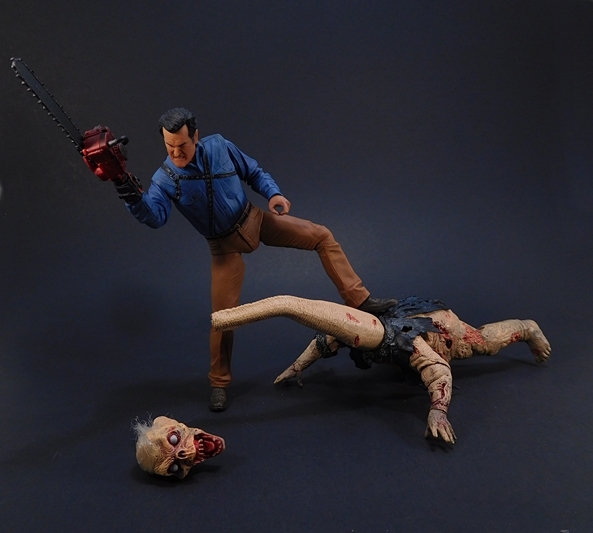 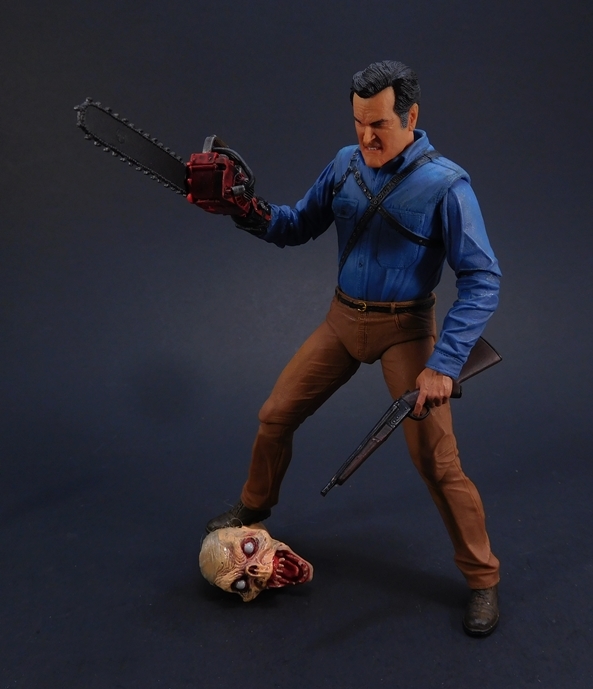 The neck also features a break in it so you can have Ash hack off the head about a third of the way down the neck. The inside area where the neck breaks apart is even painted bloody. It’s a play feature!!! 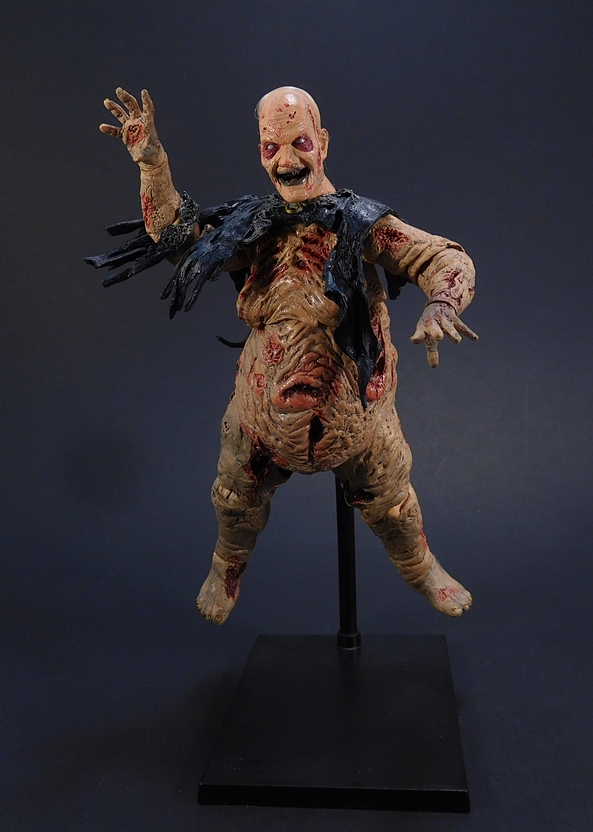 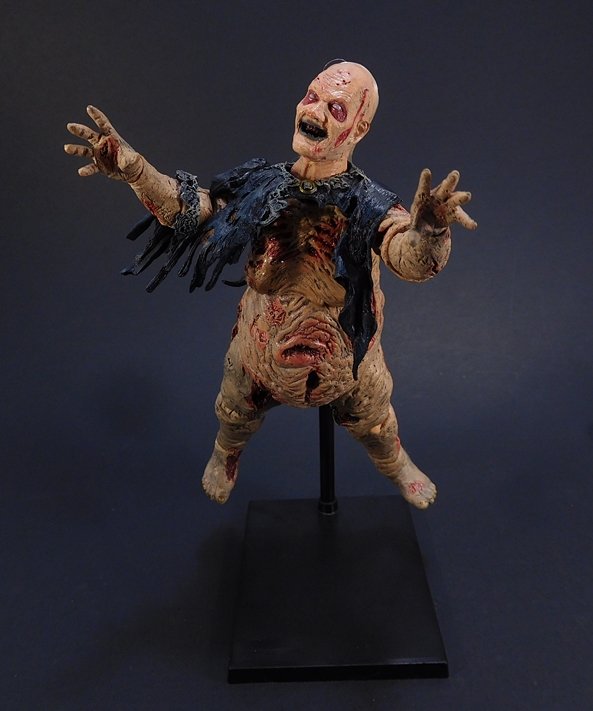 And finally, NECA included a stand to simulate Henrietta levitating as Deadites are want to do. It’s a simple black base with a rod that plugs into the base and into her back. It works quite well, but I wish they had cast it in clear plastic. Either way, it’s a nice bonus to throw in with a figure that already uses a heck of a lot of plastic. 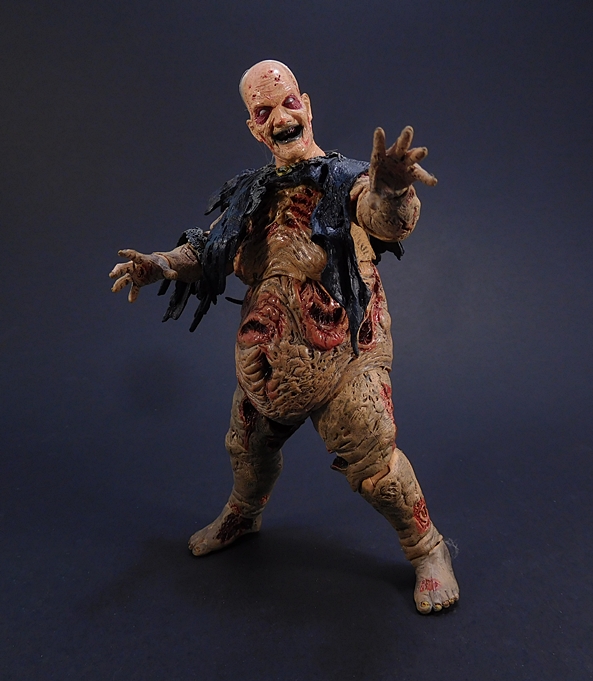 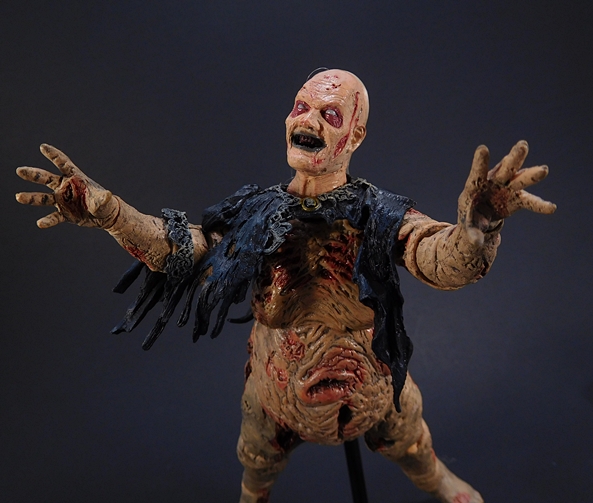 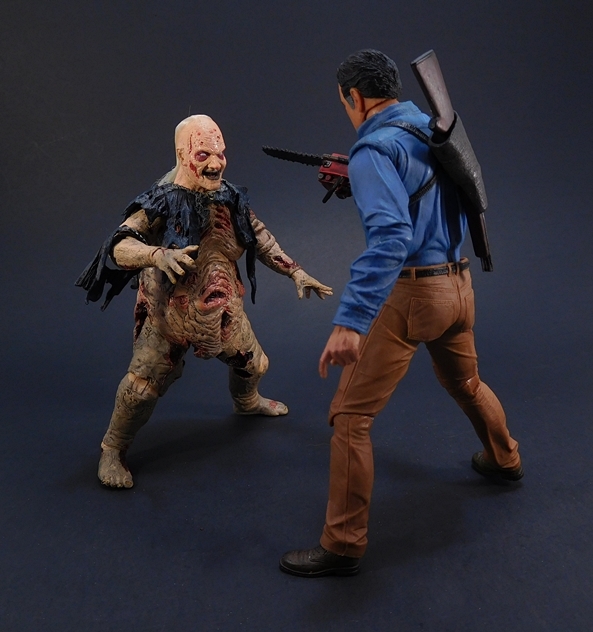 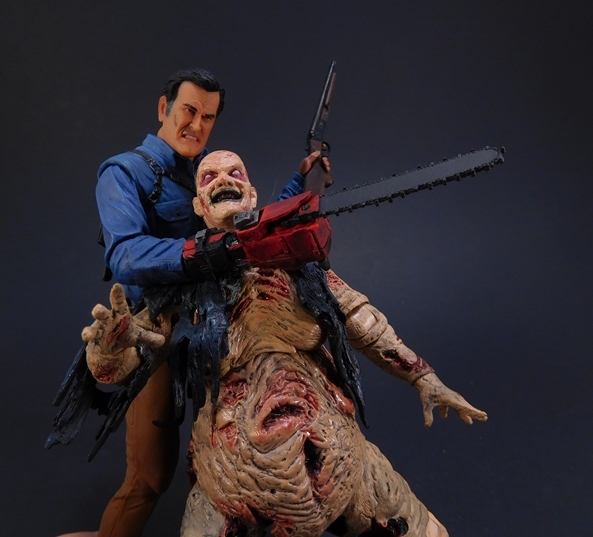 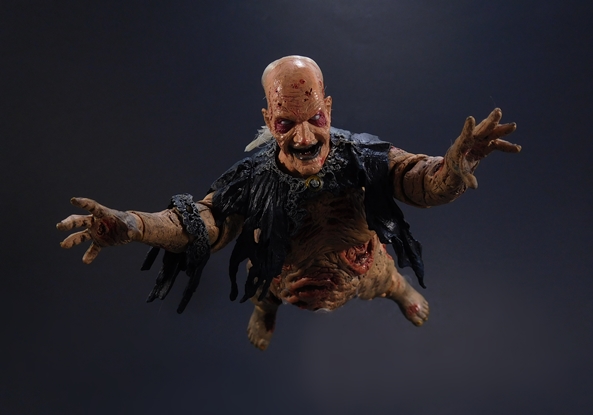 If you can’t tell by now, I really dig this figure a lot. AvED’s Henrietta is a great release on her own, and all the more welcome when you consider that the original version goes for a fair bit of coin these days. The two designs aren’t 100% interchangeable, but I’d be fine having this one stand in with my Ultimate Ash and call it close enough. In fact, I may very well pick up another so I’ll have one for both the modern and more classic displays. She feels like a Deluxe figure, but at about $21, she’s at the same price point as the other two figures in this line, and that’s a pretty damn good deal!

One comment on “Ash Vs Evil Dead: Henrietta by NECA”