Holy shit, it’s a new Transformers review! Before jumping in, I want to make mention of how frustrating the Power of the Primes line has been for me. Distribution is never great in my area, but I was still able to pick up maybe half of my Titans Return figures in either the local Walmarts or Targets. And what I couldn’t find local, I was able to get off of Amazon at, or at least pretty close to, MSRP.

PotP has changed all that. The big box stores here either have empty pegs or the pegs are busting with Robots in Disguise figures where PotP should be. Even those newer Bayformer Studio figures are moving in on PotP’s turf. When the Walmart finally restocked, they restocked with two cases of the first wave. Amazon has been no help either because the Deluxe Class figures have been running in the $25-35 range. So, while it’s true I have not been as impressed with PotP as I was with Titans Return, I haven’t been intentionally snubbing this line. Indeed, I was actually thrilled to finally find a couple Deluxes at regular retail, because I still love getting new Transformers. OK, enough of my bitchin’… on with the review of the Terrorcon Rippersnapper! 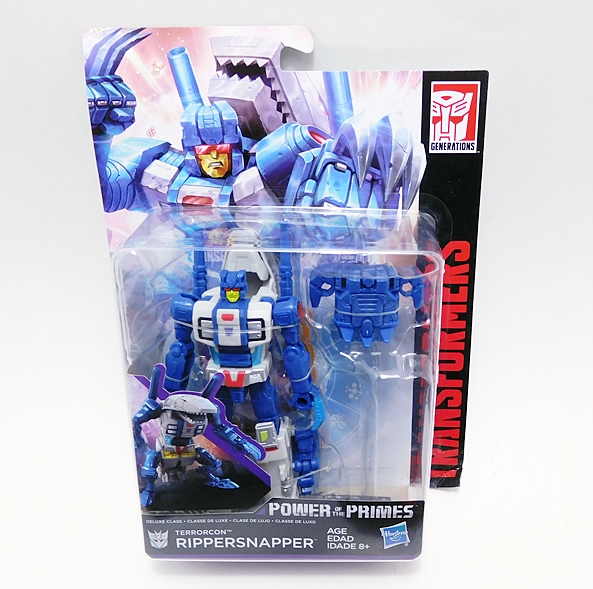 Just look at that bitchin’ character art! By the time the G1 Terrorcons hit in 1987, I was 15 years old and more obsessed with Star Trek than I was Transformers. I was aware they existed because I was still watching the cartoon, but I never owned any of the Terrorcon figures. As a result, I was super excited to see them coming out as part of the Power of the Primes and allowing me to finally own these characters in brand new versions. Rippersnapper is the first of these to cross my path, so let’s get rip him open and snap some pictures! I’m going to start with his robot mode…

The original Rippersnapper was one of the smaller, basic sized combiner limbs, so getting him up-scaled to a Deluxe is pretty damn cool. The robot design takes some cues from the original toy, but is obviously much better proportioned and with serviceable articulation! I don’t know that I would recognize who he’s supposed to be from the front, but being in the know, I think it’s a great update. Some of my favorite things include, the chest plate that covers his combiner port, the guns that rise up over his shoulders and the way the claws on his forearms work with the articulation in his wrists. In fact, my only quibble about this robot mode is that his right beast leg doesn’t secure the way it should. There’s a peg there to hold it in place, and it works fine on the left leg, but this one just keeps popping out.

From the back, Rippersnapper still sports a pretty clean profile. The beast mode’s head forms a curved backpack and hood of sorts, while the tail fins function as heel spurs. The robot mode’s deco is predominantly a mix of cream and dark blue plastics with some lighter blue accents, as well as some red, silver, and yellow paint apps, giving him a much more diverse color palate than some of the Titans Return figures. All in all, I have to say that I love this robot mode. It looks great, the colors are beautiful, and really fits the G1 cartoon aesthetic that I treasure so dearly. 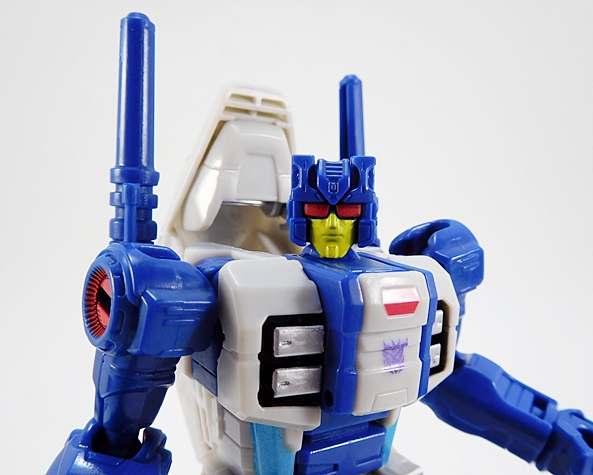 I don’t have any special attachment to Rippersnapper’s portrait from the good old days, but the head they went with here looks pretty similar to what I remember from the cartoon. He has a rather complex and squared-off “helmet” that frames his yellow face and large red peepers. It’s been so long since I had a new Transformer that my initial instinct was to pop the head off and then I remembered that was the last line’s gimmick. What was this line’s gimmick again?

Ooooh yeah. These stupid Prime Armor pieces.  I don’t like these at all, but I suppose Rippersnapper still looks passable with it on, even if it does bulk him out like crazy. As always, the piece on the front of the armor can be removed and you can stick one of the Prime Masters in there to give him imaginary powers. Yeah, I still don’t like this gimmick, but I do love the Pretender homage that’s included with the tiny Prime Masters, so I’ll definitely be picking up more of those when I find them.

Rippersnapper’s guns can be removed from behind his shoulders and held in his hands. These are a cool matching set of blasters, and I like them a lot better than the ones that came in the last line and had seats for the Titan Masters. Between these and his claws, Rippersnapper definitely has all the bases covered for combat. So let’s see how he looks in his Terrorcon beast mode…

The transformation here is pretty simple and it feels familiar, particularly in the way the legs expand and retract and that’s basically 90% of the transformation. The result is a… what? Some kind of land shark demon thing? Oddly enough, Rippersnapper’s alt mode has always stuck with me, despite never owning the original toy, and I think this is a pretty slick update, even if there isn’t a whole hell of a lot to it. His little legs are strong enough to support his body, but he can also rest it on his tail fin when he wants to. Also, his forearms are a lot more menacing than I remember from the original toy. He has some decent reach with those claws.

From the sides, Rippersnapper sort of looks like an adorable baby Trypticon. I think that’s mostly because of the dual cannons protruding over his shoulders and the snapping jaws. But no doubt, he’s more shark than dinosaur. The deco is more or less the same as the robot mode, and still very pleasing on the eyes. Oh yeah, and I love the faked out rub sign on the back of his shark head. 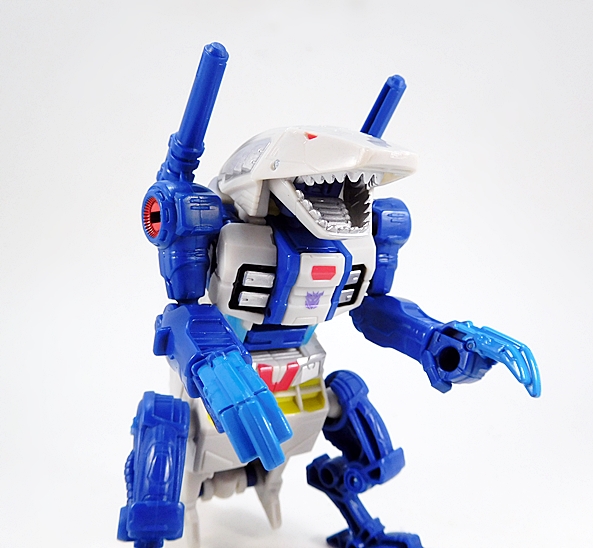 Speaking of the shark head, it features a lot of personality, especially in those beady little triangular red eyes and silver teeth. I really dig the vents sculpted into the sides of his head as well. The fact that there’s nothing to hide his robot chest being the same as his alt mode. At least all that great detail doesn’t go to waste. 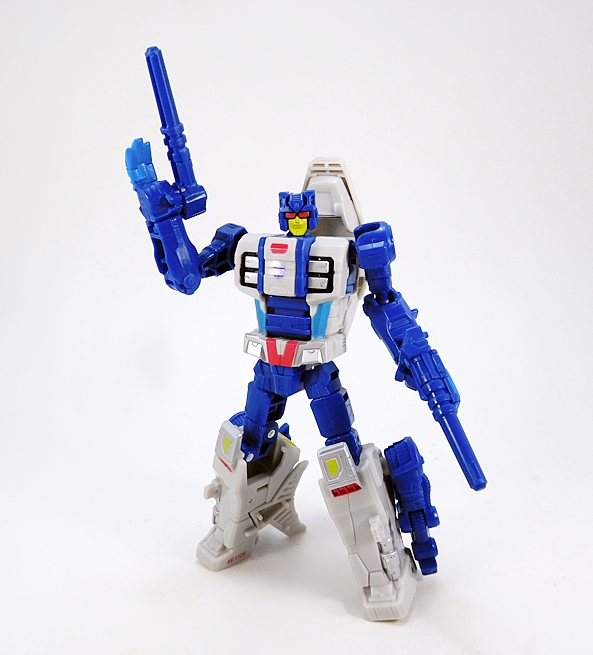 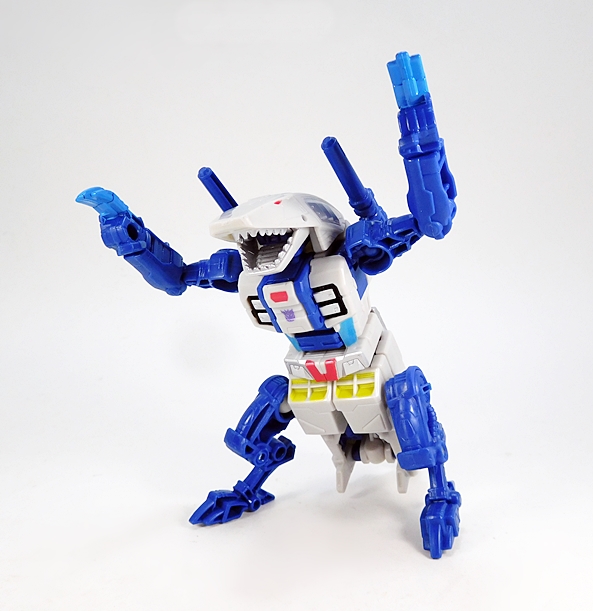 Man, it feels great to open up a new Transformer again and I think Rippersnapper was a fine figure to come back to. There’s nothing exciting about the transformation engineering, but he is a super fun figure in both robot and alt mode. This kind of creativity that went into the later G1 designs is something that I missed out on back then, and it’s great to be experiencing it now with these modern updates. Hopefully, I’ll be able to find the rest of the Terrorcons before too long, because I’m anxious to get this team together. In the meantime, next week I’ll be back with a look at another figure from this assortment… and it’s a femmebot!

5 comments on “Transformers “Power of the Primes:” Rippersnapper by Hasbro”