Well, folks, I spun the Wheel of Marvel Legends and it landed back in the Sasquatch Wave with Deathlok… and I couldn’t be happier! I seem to recall, back when I reviewed his Marvel Universe Infinite figure, that I confessed my love for characters that are mortally injured (or already dead) and saved by horrific cybernetic surgeries. It most certainly explains my man-crush on RoboCop and countless other comic, cartoon, and movie cyborgs. Of course Deathlok is pretty unique among them and it’s long past time that Hasbro gave him a modern Legends figure. The body horror is bad enough, but then waking up in the far-flung shitty future is just the icing on the cake that made Deathlok such a cool character to me. He also got some love in the Agents of SHIELD series and was one of the few things I liked about that show before I abandoned it. Still, it tickles me to know he’s officially part of the Marvel Cinematic Universe.

And Deathlok is figure in the Sasquatch Wave that may be to blame for Deadpool’s lack of accessories. Like Cable, Deathlok’s tray is absolutely packed. He’s a sizable figure to begin with, and then toss in the weapons and the BAF part and there’s not a lot of room left on that tray. I haven’t read anything with Deathlok in it since 2014, so I’m happy Hasbro went with the more classic look for the character. Also like Cable, this version just screams glorious 90’s comics to me and it’s virtually identical to the design they used for the excellent Marvel Universe Infinite figure from that same year.

And oh boy do I love this design! This Legends redo hits all the same great points as the smaller release and even takes advantage of the larger scale to give us a few extras, like the yellow pipe that comes out of his chest and connects to a control box on his belt and the working holster. There’s plenty of points of interest on this spiffy sculpt. The exposed cybernetics on the legs and right arm mimics the musculature of the human body with cut segmented lines and I’m always a sucker for those! Other staples of 90’s design? Kneepads? Check! Shoulder slabs? Check, check! Pouches? Check times infinity! Well, maybe not that many pouches, but he does have a brace of them running across his belt and they even stuck a couple more on his holster loop. I also really dig the raised American flag on the right side of his chest. The backpack has some nice cut lines and whatever the hell that is supposed to be in the middle. It’s also connected to those slabs of shoulder armor.

The coloring on this guy makes for a stunningly beautiful figure. You get the candy-apple red for the torso, boots, and left arm, with some lovely yellow accents to really make the deco pop. Surprisingly, the silver limbs appear to be cast in silver plastic, which is something that usually doesn’t look as good as Hasbro’s silver paint, but it sure gets the job done here. Throw in a little brown for the belt, wrist bracers, and knee pads to keep things grounded and you’ve got a feast for the eyes. Finally, the backpack and shoulder pads feature a perfect gun-metal finish. 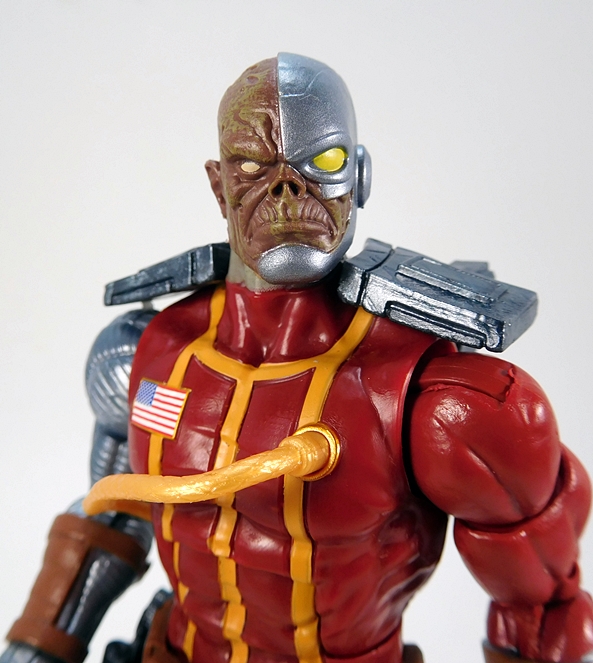 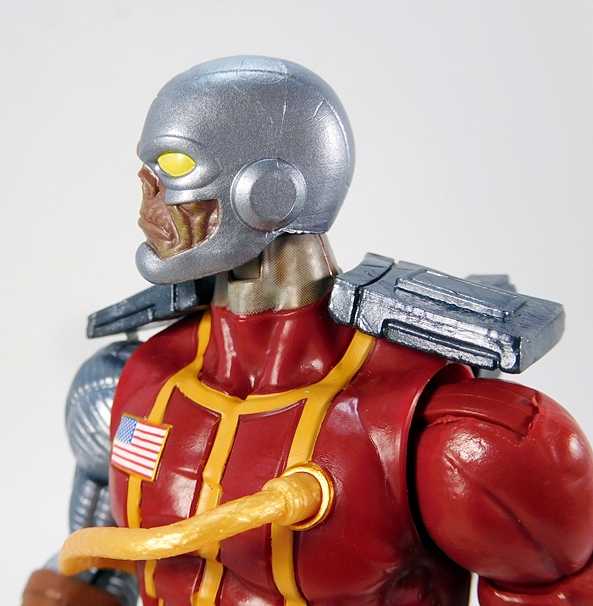 And that brings us to the head sculpt and it’s a doozy! Deathlok features the classic half-zombie, half-machine look, with smooth silver cybernetic parts contrasting beautifully with the beef-jerky texturing of his rotten head. It’s a pretty damn grim portrait to be hanging in the kids toy aisle at Target, but I love it. You get a missing nose, puckered skin surrounding a down-turned mouth, and a really gross wash that looks a lot like rotting flesh. Hey, at least his right ear appears to have been well preserved! Meanwhile, the partial cybernetic parts are practically featureless and that really drives home the contrast between old meat and new tech. I’d be hard pressed to choose between this portrait and the one that Hasbro did for the 4-inch version, as they’re both excellent, although this larger noggin does allow for more detail.

Deathlok has articulation in spades, and while there’s a very slight gummy quality to his knee hinges, it’s not something I’m getting too upset over. The arms have rotating hinges in the shoulders and wrists, swivels in the biceps, and double hinges in the elbows. I should point out that the muscle sculpting doesn’t allow for the degree of elbow flex that I’m used to seeing in my Legends figures, but I’ll give it a pass. The legs are ball jointed at the hips, have double hinges in the knees, swivels at the thighs and tops of the boots, and both hinges and lateral rockers in the ankles. The torso has a torso swivel, an ab-crunch hinge, and the neck is both hinged and ball jointed. Ever since I opened him, I’m having a hard time putting Deathlok down. 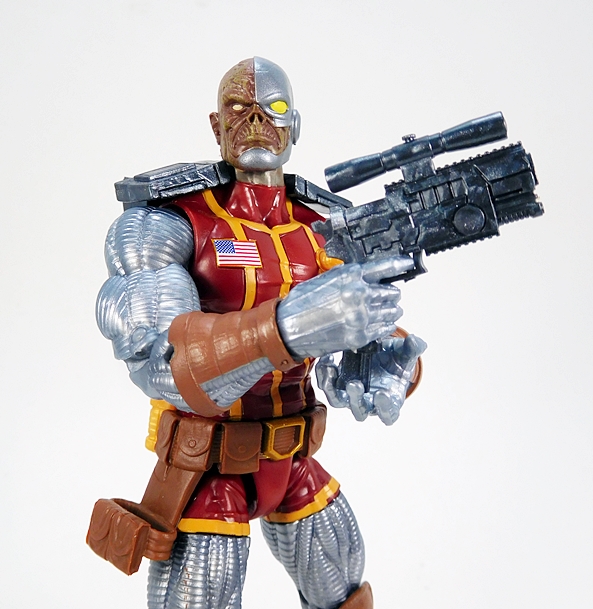 Deathlok comes with two weapons, the first is his pistol, which fits comfortably in the loop-style holster on his right hip and features quite a beefy design. It includes a scope mounted on what looks like a sliding rail, although it’s not articulated. There’s also a long magazine protruding from the grip, and no it’s not removable. In addition to various cut lines and details, the pistol has a bit of silver wash to make it look well weathered. I’m not usually a big fan of having just loops as holsters, but in this case the gun draws really easily, so this would be a good exception to my rule.

Secondly, Deathlok comes with this big mother of a three-barreled gatling gun and belt of ammunition that can slot into either the top or bottom. It’s an impressive looking piece of weaponry, but it can be a little awkward for him to hold, since there’s no obvious place for him to support it with his right hand. But maybe that was intentional, since he can wield it with just his one cybernetic arm, and he looks like a badass doing it. Oh yeah, it also looks like the shrouded part houses missiles. I can’t let Deadpool see this thing. He’ll just go nuts with rage and jealousy. 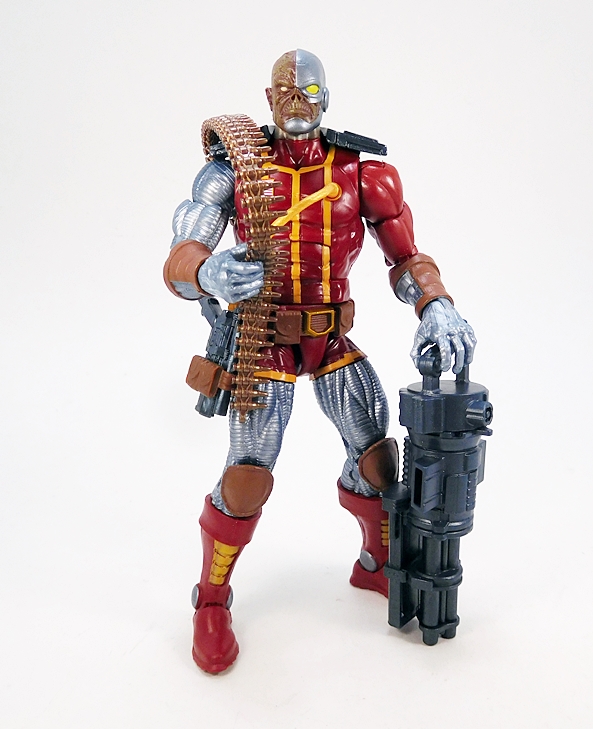 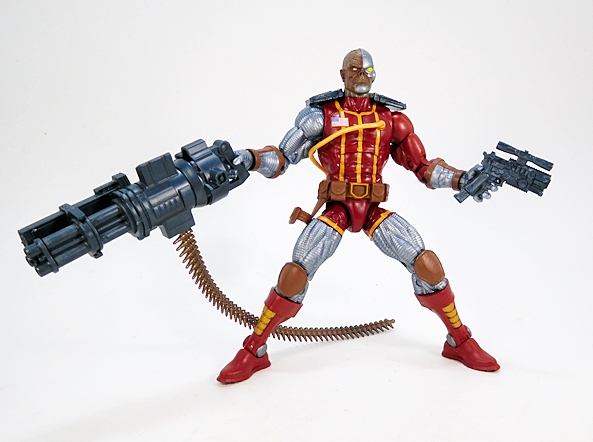 The Sasquatch Wave has been firing on all cylinders for me. Despite picking on Deadpool for his lack of accessories, every figure I’ve opened in this assortment so far has been something special. So when I say, Deathlok ranks high up there as one of my favorites in this wave, it’s really saying something. In fact, he’s probably tied with Cable as my favorites. This figure is a beautifully colored, features a fantastic sculpt, and some great weapons. You can usually judge how much I love a new figure by how long it gets to stay on my desk, and I gotta tell you, Deathlok is probably going to be here on the desk for quite a while.