I hope you don’t have Marvel fatigue from last week’s Marvel Legends theme, because I’m headed into the new week with Marvel Monday, business as usual! And I’m also back to spinning the Wheel of Legends to pick another random figure to open up today from the towering pile of shame in the corner. This week, the wheel landed on Hobart Brown, aka Spider-Man from Earth-138! I couldn’t be happier with this result. 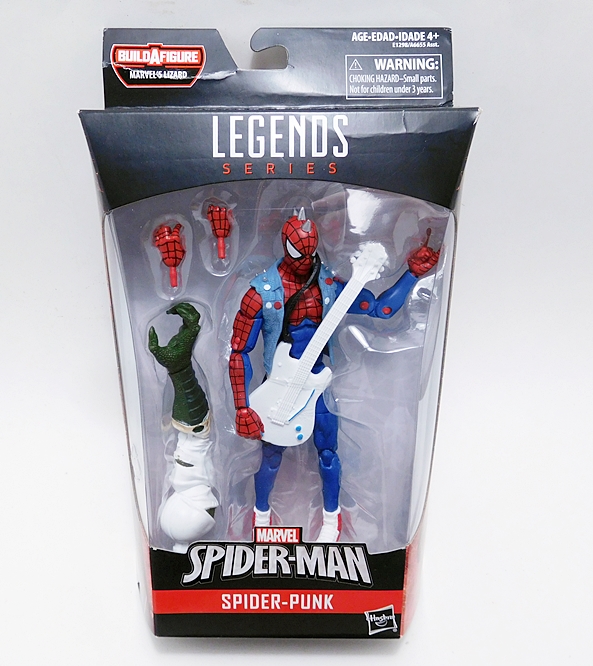 Ah, but Hasbro seems to know him best as Spider-Punk as that is indeed the name printed on the box. I’ve said it before and I’m sure I’ll say it again: Hasbro must thank the heavens for Spider-Verse, as it gave them a deep well of Spider-Man variants to drop their bucket into, knowing damn well that idiots like me will fork over our hard earned money to buy them all! And they sure are going full guns with it. There was a time when I thought the now all but defunct 4-inch Marvel Universe line was the only hope I had to get characters like this one, but the 6-inch Legends line has exploded to the point where literally any character seems like fair game. Let’s rip open this package and check him out! 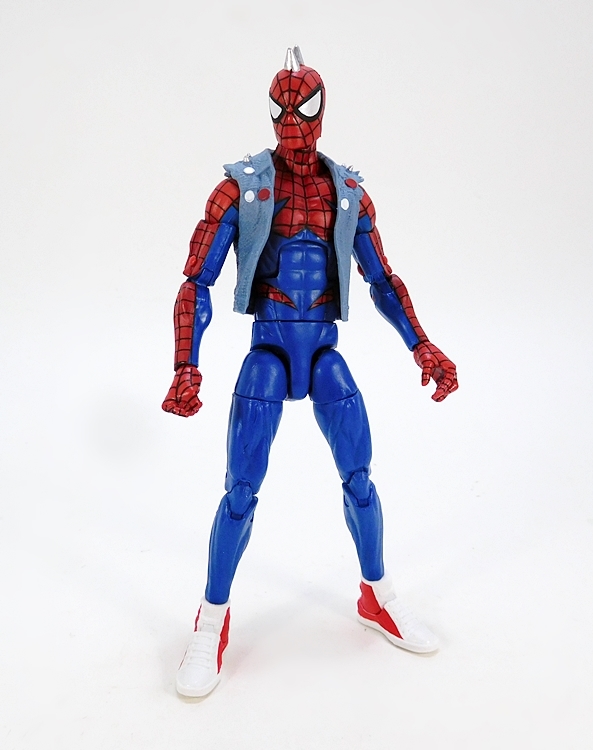 The bulk of Hobart’s costume is painted onto the buck, just like most Spider-Man figures. Here we get a beautiful combination of vibrant blue and red. The blue occupies most of the figure and forms a large spider emblem on the chest, while the red features the familiar web pattern. The paint on my figure looks great, but if unpainted pegs in the joints bother you, then you may be pissed to find that the elbow pegs on the interior of the arms have been left red. In a perfect world, I would have liked to see them match the surrounding blue, but this just isn’t something that I get all worked up about. You do get some original sculpting for the sneakers, which are white with red sides. 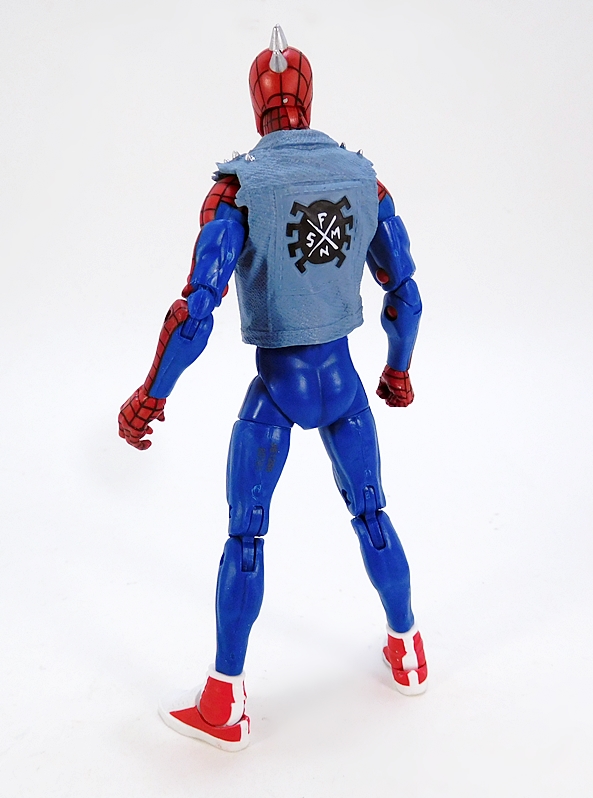 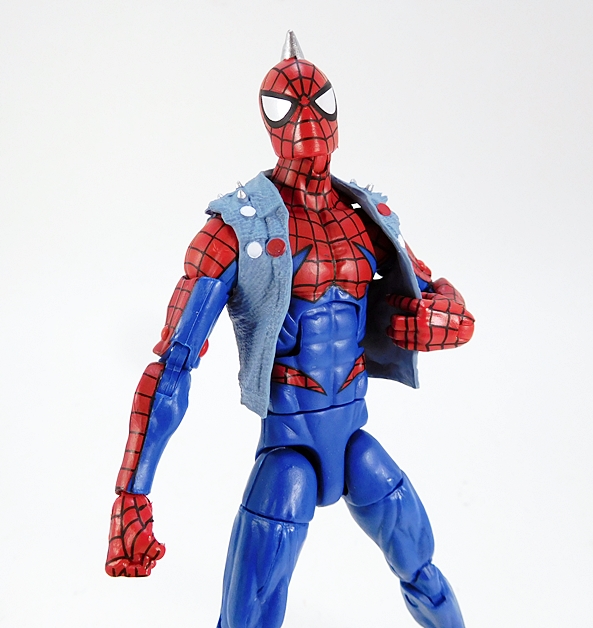 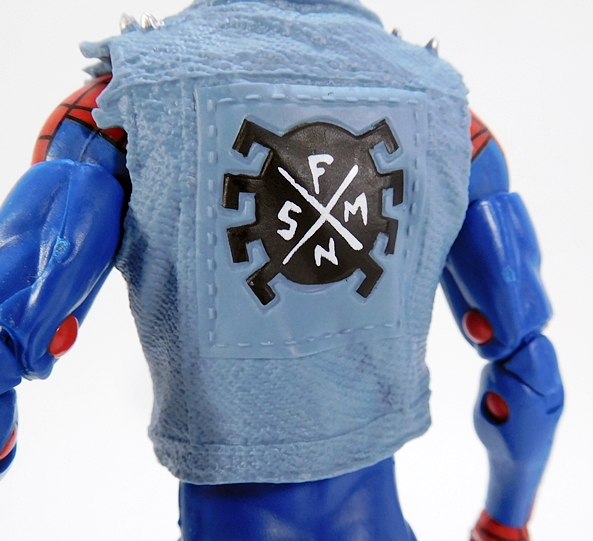 Of course, Spider-Punk also features his vest, which is sculpted in soft plastic and given a denim-like texture. The sleeves have been ripped off and there’s a patch sculpted on the back, as well as some stitch lines around it. The shoulders feature some silver spikes, and there are various red and white buttons sculpted onto the front flaps. Boy did Hasbro do a nice job on this one! 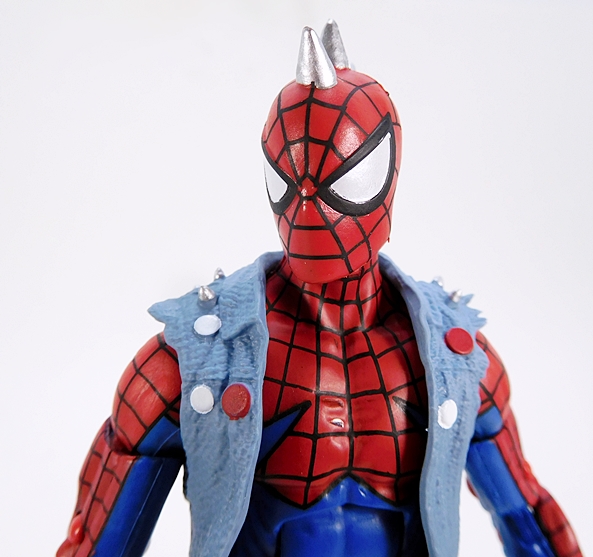 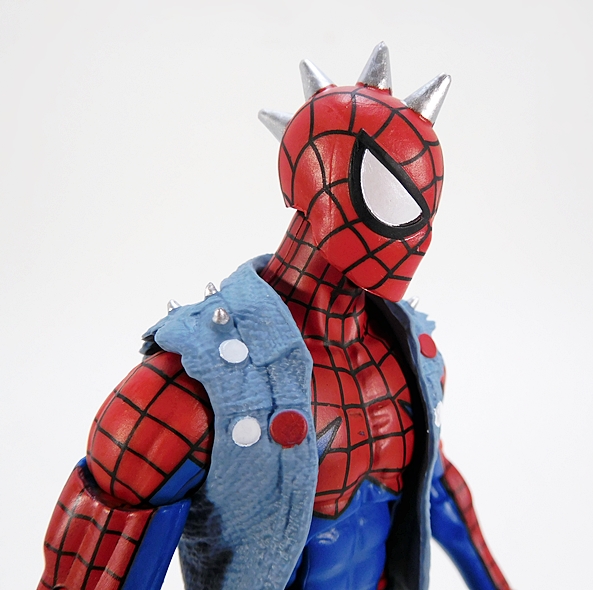 The head sculpt is pretty typical Spider-Man fare, unless you count those bitchin’ silver spikes that crown his head. The mask has nice, big eyes and the paint apps are all pretty crisp and clear. 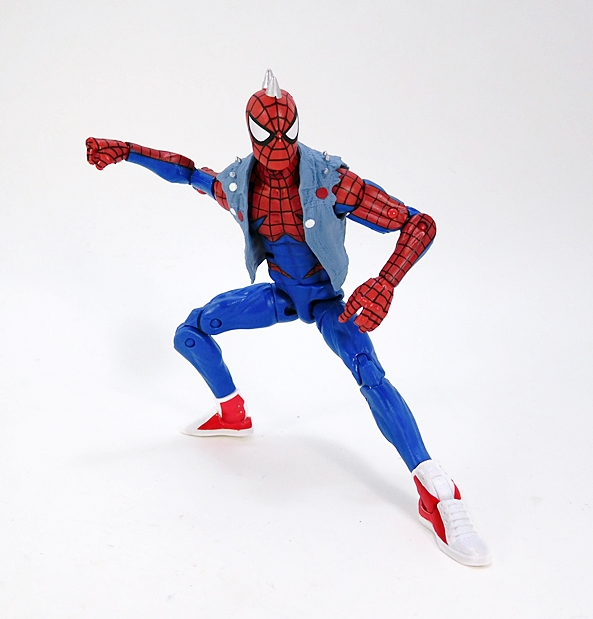 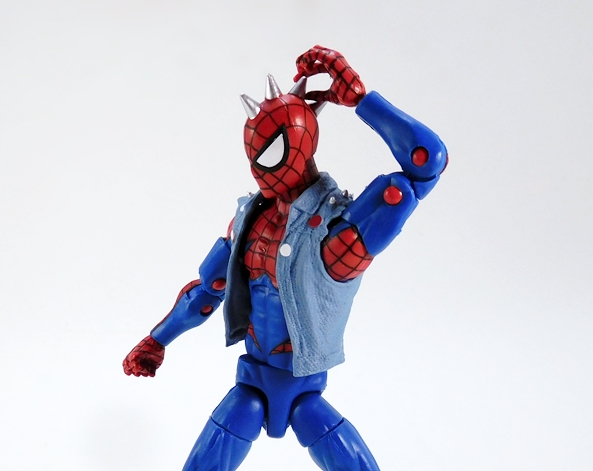 Hobart features all the articulation I’m used to seeing in my Legends Spider-Man figures. The legs have ball joints at the hips, double hinges at the knees, and swivels at the thighs. The big difference here is that the lower leg swivels are in the ankles at the tops of the sneakers. The ankles also have hinges and lateral rockers. The arms feature rotating hinges in the shoulders, swivels in the biceps, double hinges in the elbows, and hinged pegs at the wrists. There’s a swivel in the waist, an ab-crunch hinge, and the neck is hinged and ball jointed. 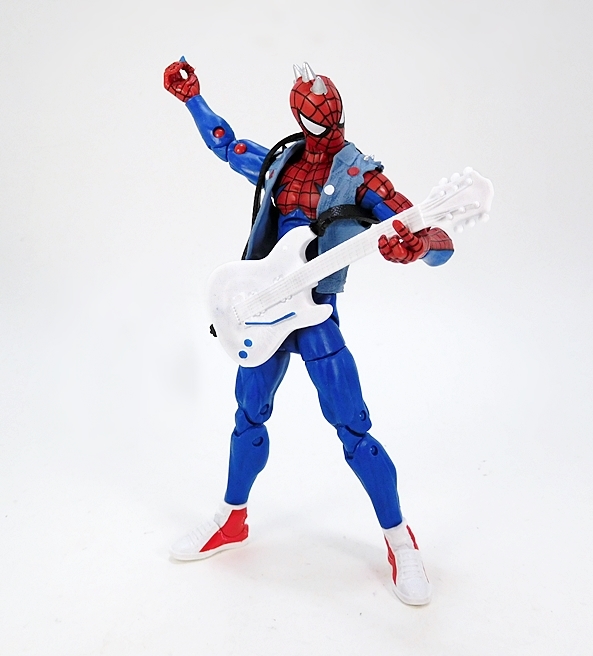 Obviously, you can’t have Spider-Punk without his trusty guitar and it is a seriously fun accessory. The mostly white guitar features a few blue paint apps and a black shoulder strap. The upper strap on mine pulled off the guitar after just a few poses, but it was easy to glue back into place. I would have really liked some more paint on the guitar to bring out some of the detail, but it’s still pretty damn cool.

You also get an extra left “thwippy” hand, which has a delicious double purpose here, as Hobart can use it to flash Dio’s two-fingered salute. ROCK ON!

Like a lot of the recent waves of Marvel Legends, Spider-Punk was tough for me to find at a decent price. He hasn’t turned up anywhere on the pegs in my neighborhood and he’s still selling for $30+ on Amazon. Luckily, I got in on a pre-order at one of the big online toy retailers, and while it cost me a few bucks more than he would in the store, I’m just happy to have him. This is a great example of just how much love Hasbro is willing to put into this line, and just how deep their willing to go when it comes to variants and characters. But most of all, this figure is just so damn fun to play with.