I’m sure that I’m not alone when I say the Bounty Hunters from The Empire Strikes Back are one of the sub-groups that I’m the most excited to see completed in the 6-inch Black Series. Hasbro started out of the gate with a Boba Fett in the very first wave, but after that it took us a little while to get Bossk and IG-88. I wouldn’t have bet money on the next release being 4-LOM and yet here he is, the fourth Bounty Hunter from The Empire Strikes Back to hit this line. 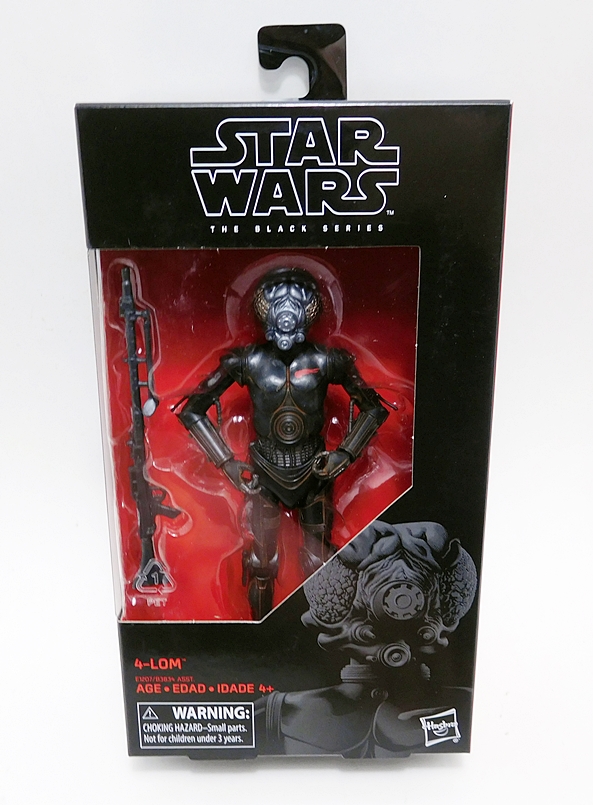 4-LOM, or Zuckuss if you’re Kenner old school, comes in the typical Black Series packaging. Yeah, it’s kind of boring, but the black and red deco has grown on me over time. Like all the bit characters from Star Wars, 4-LOM has been retroactively credited with a backstory. In this case the package says a glitch allowed him to break out of his protocol droid programming and become a Bounty Hunter. Back in the day, I always just assumed he was a droid owned by Zuckuss to help him hunt bounties, and I tend to stick with that idea in my head canon. 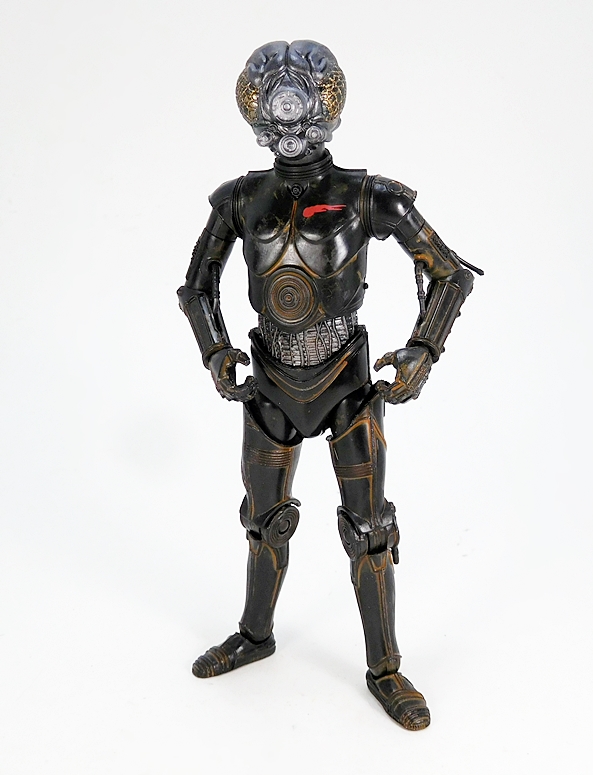 Whatever the case, I always thought 4-LOM was a bad-ass looking droid. Sure, he’s sporting a design that is very close to the standard protocol droid, but there are some key differences. Plus, Hasbro really stepped up to the plate to point them out and even toss in some improvements over the two 6-inch Black Series C-3PO figures they have released so far. The legs look identical to me, as does the pelvis, but that’s where the parts recycling seems to end. 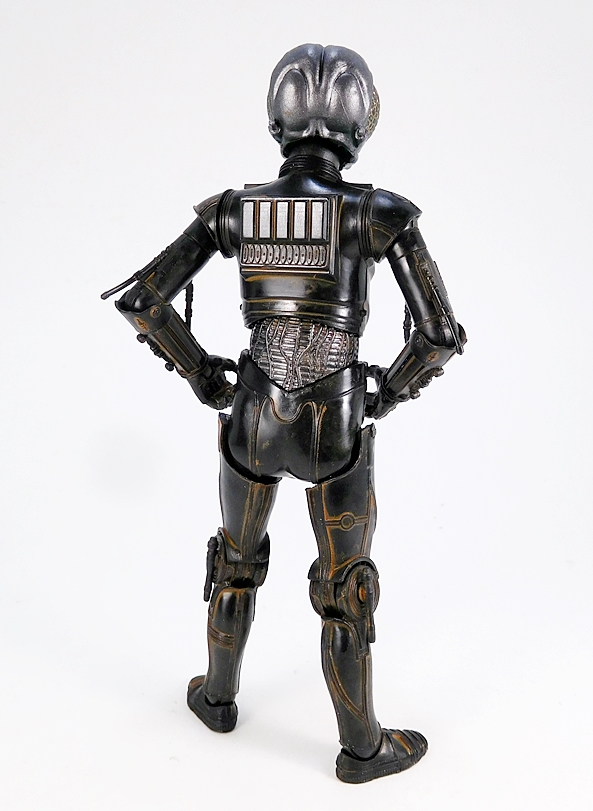 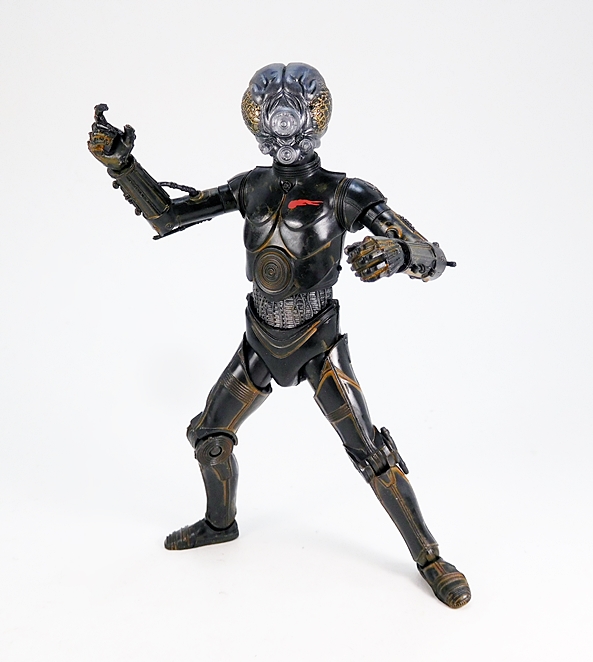 For starters, the arms are new and actually feature elbow articulation this time around. Yup, that was a pretty big sticking point with me on the previous 3PO body. Now, granted, there isn’t a huge range of motion in those joints, but the fact that it’s there, complete with little tracks for those hydraulics to slide on, really impresses the hell out of me. At the same time it makes me wonder why they invested the extra work into 4-LOM and not into a main character like 3PO. Sure, the hydraulic on my figure’s right arm seems to prefer bending instead of sliding in the track, but I still appreciate the effort. Apart from the added articulation, the arms look mostly the same, although there is new sculpting in the shoulders and the hands are now designed to hold a weapon. The rest of 4-LOM’s articulation is identical to the C-3PO figure and I’ll refer you back to that review for the details. 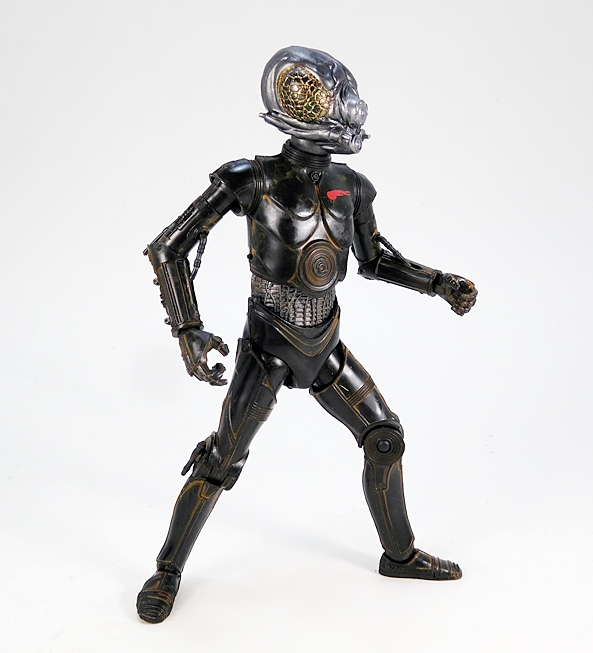 Also new are both the torso and the exposed midriff circuit area. 4-LOM still features the familiar protocol droid concentric circles design in the middle of his tummy, but he looks like he has two sets of chests. The coloring on the body is very simple, as it’s all done in a matte black with a lighter gray used for the midriff, and an orange rust wash to pick out the details. He also has a red stripe of paint slashed over the left side of his chest. 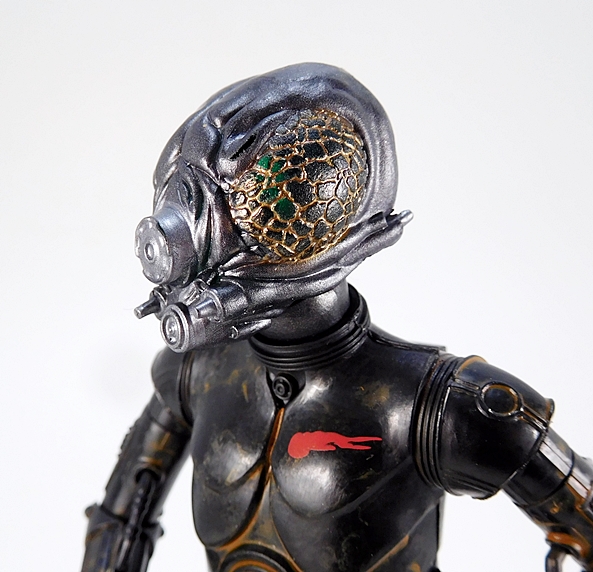 The head sculpt is quite a little masterpiece. I’ve always loved the idea that Industrial Automoton would just tweak a standard protocol droid body and slap a Gand head on it to make it more familiar to that species of clientele. The detail in the facial sculpt is absolutely superb and I love the translucent green plastic they used for the giant compound eyes. It’s still amazing to me that a line that still struggles with producing basic human likenesses can turn out something so good when it comes to the aliens and masked figures. 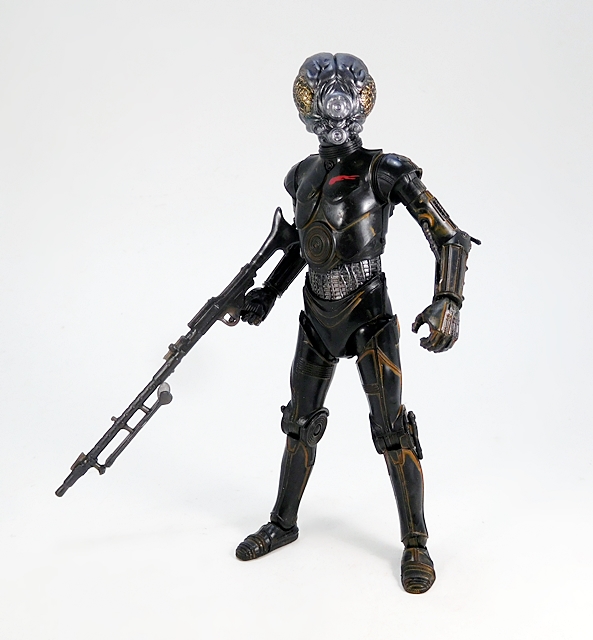 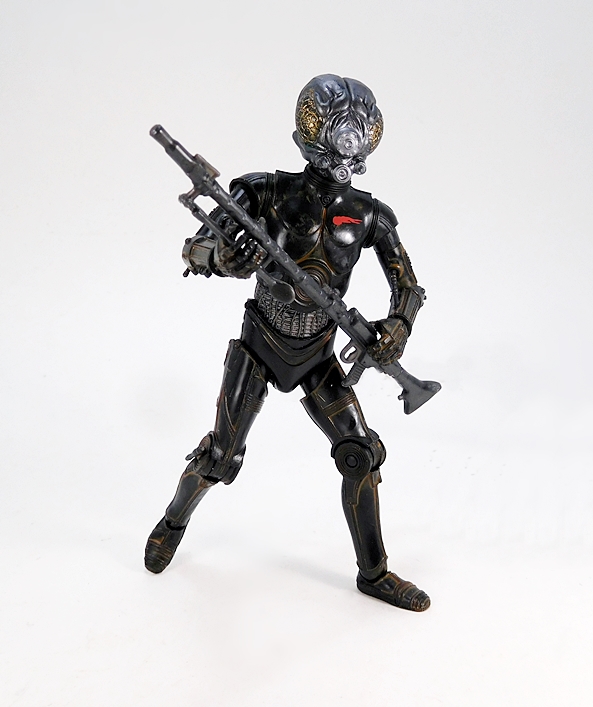 4-LOM comes with his rather distinctive, and rather long, blaster rifle. It has a very thin profile and features a folded bi-pod under the barrel, which cannot be articulated. I really dig how well 4-LOM can hold this thing and even the stock is a perfect fit to get him into a firing position where he’s aiming right down the barrel. 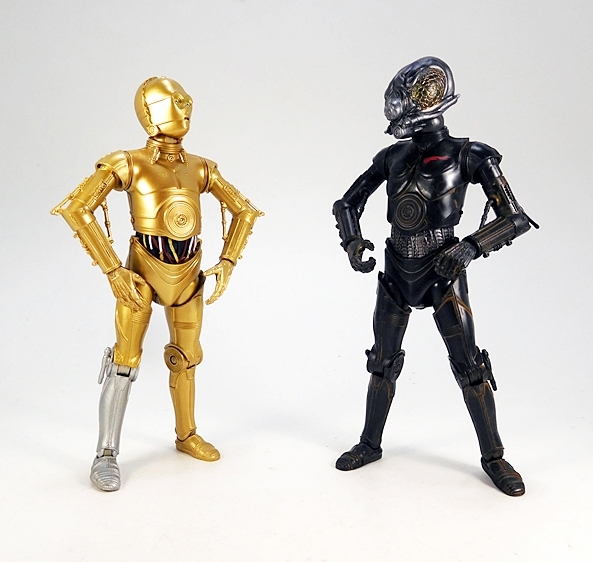 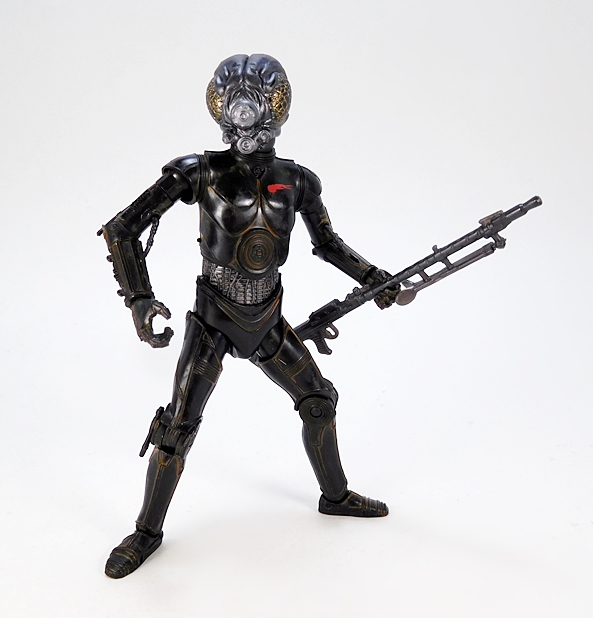 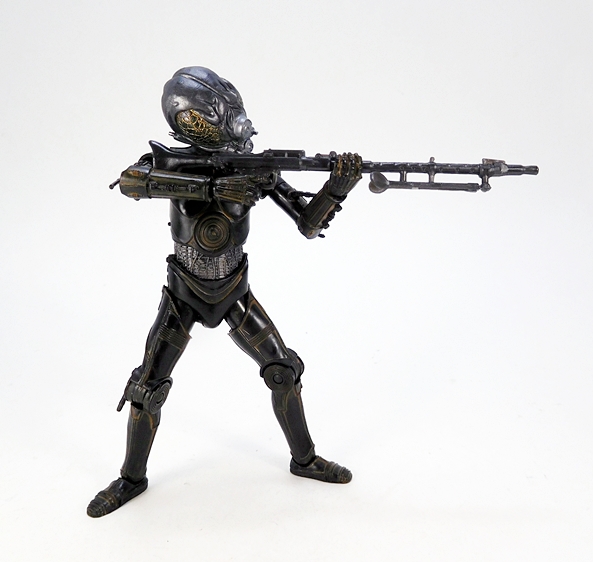 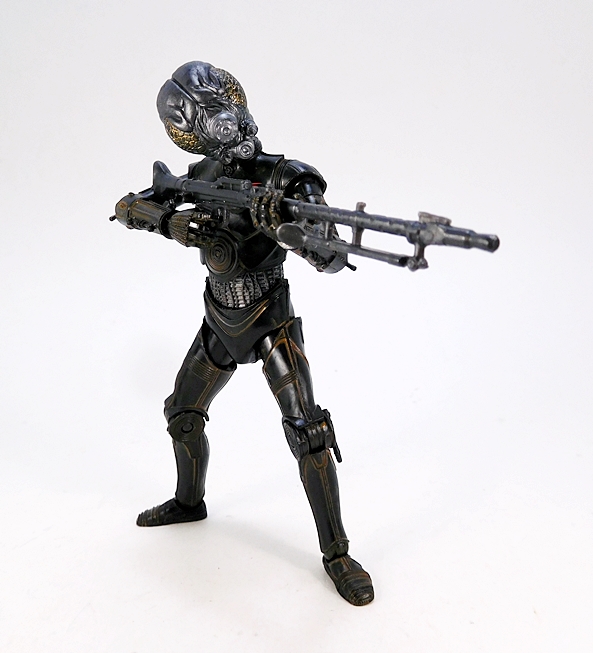 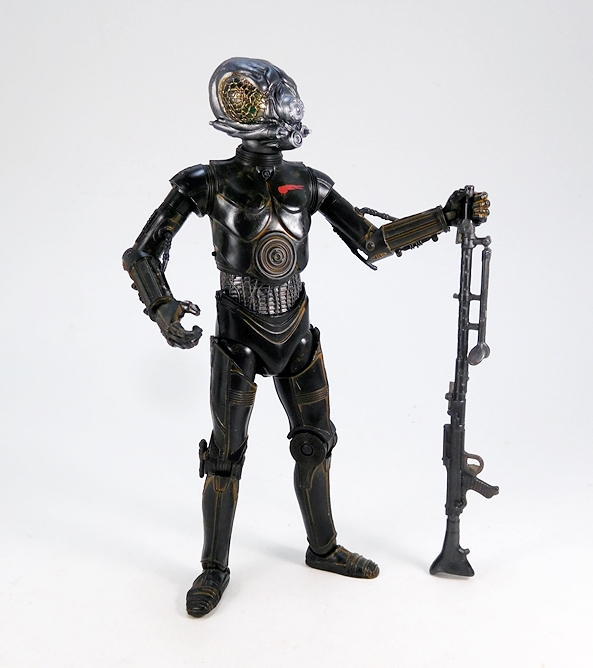 I don’t think I was expecting to enjoy 4-LOM nearly as much as I do, and yet I’ve been messing around with him ever since I opened him up. The extra articulation is certainly a welcome surprise, but beyond that everything about this figure just comes together so perfectly. That’s the thing with the 6-inch Black Series. There are so many figures that could be done better and mediocrity often rules the day, but when this line is good, it’s really really good! Now bring on Zuckuss and Dengar!