The 6-inch Black Series is perpetually in danger of getting dropped by your’s truly. It seems like for every great figure, there are a handful of mediocre ones. It also seems like Hasbro continually squanders the opportunity to make use of the larger scale and produce figures that are genuinely better than what could be done in the 4-inch scale. But just as I’m about ready to call it quits, Hasbro goes and teases a new release that gets me all hot and bothered again. And yep, Tarkin is just that kind of figure. I pre-ordered him, which is something I rarely ever do with this line, and it felt like it took forever for him to finally arrive. 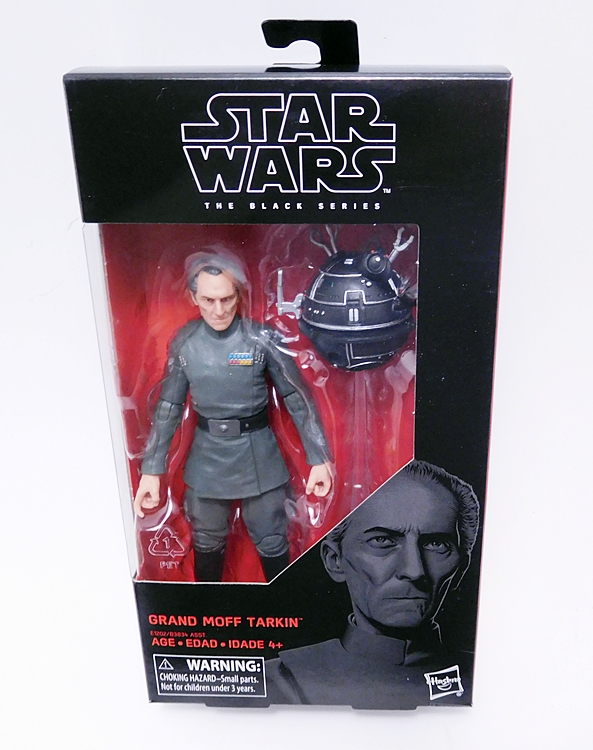 I’ve got nothing new to say about the packaging, so let me gush over Peter Cushing for a bit. There’s no doubt Star Wars introduced him to me, but as I got a little older, I would discover the films of his horror career and I became smitten with him as an actor. Darth Vader may have had the spotlight in merchandising, but let’s not forget that Tarken was holding his leash, making him one of the greatest bad asses of the entire Original Trilogy. When he featured prominently (and posthumously) in Rogue One, I was so delighted, it was easy for me to look past the blemishes in the CG. Yup, I really dig him and here he is in all his 6-inch action figure glory. Hopefully there isn’t any foul stench! 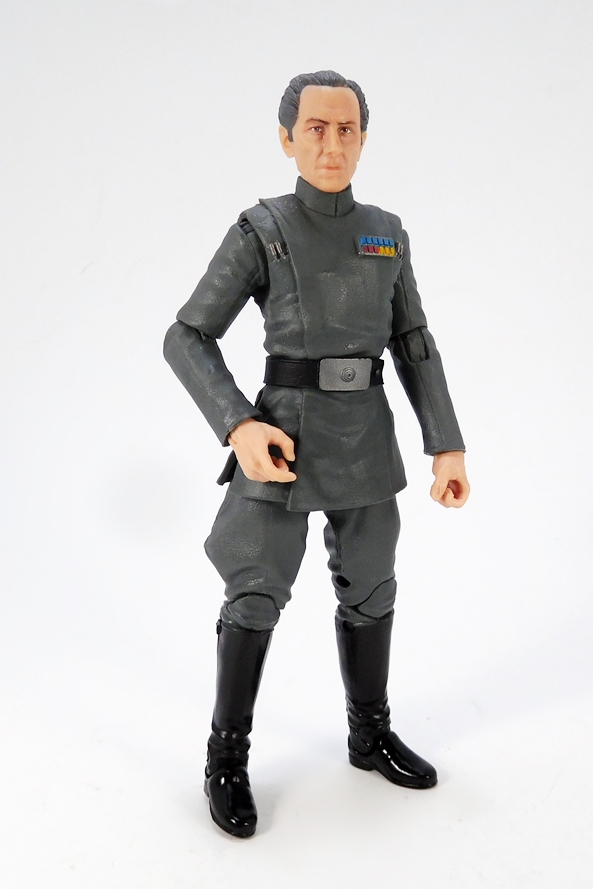 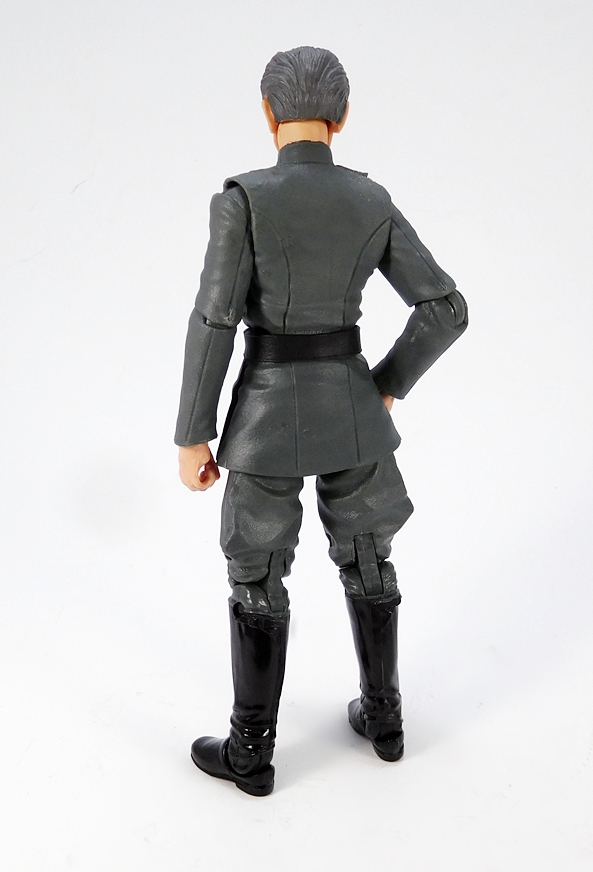 OK, I’ll concede that this is not the most exciting action figure around. It’s an old man in a uniform. Indeed, for as much as I adore having this figure in my collection, I have surprisingly little that I can actually say about it. The uniform has some nice texturing and stitch lines. I was expecting heavy reuse from the Director Krennic figure, and there’s definitely some here. The legs appear to be the same, as do the arms, albeit with new hands. The tunic looks like a re-sculpt, as there’s some added wrinkles to the area below the belt, among other minor differences. The belts are different too, and of course Krennic wears a blaster, whereas Tarkin does not. 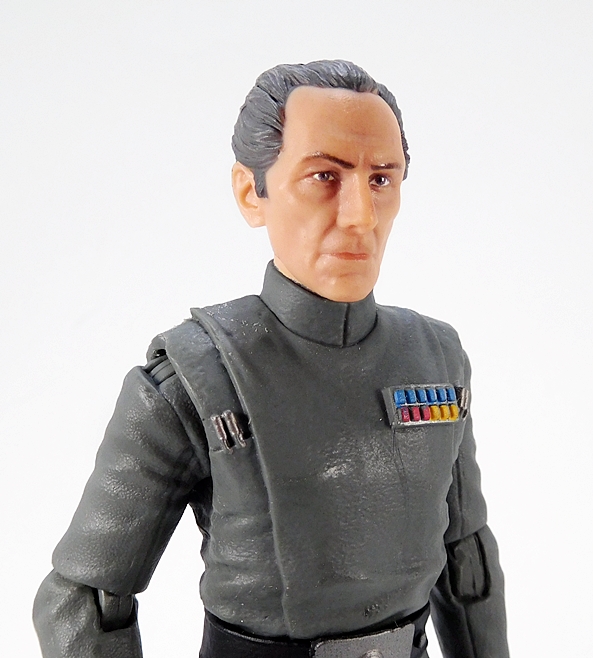 The head sculpt is pretty solid, but I will admit that it looks better in hand than it does in photos. I also think it loses a little something when viewed from straight on, but give that head a little quarter turn and I think it’s a pretty impressive likeness. The paint is also much improved over what we’ve been seeing in this line in the past. In terms of human portraits, I’d say this is definitely a step in the right direction. On the downside, the tunic area on my figure has some paint inconsistencies with some splotches that make it look perpetually wet in some areas. It’s not a disaster, but it is noticeable enough that I may pick up a second Tarkin if I can find him for a good price.

The articulation here is pretty standard stuff for the Black Series. You get rotating hinges in his shoulders, elbows, wrists, and hips. He’s got double hinges in his knees, and his ankles have hinges and lateral rockers. There’s a ball joint in his waist and both a hinge and ball joint in his neck. The joints feel good and all have a fairly decent range of motion. But hey, this is Tarkin. You pretty much just need him to stand somewhere and gesture while he commands the people around him. Conveniently, Hasbro used a gun holding right hand for him, and while he doesn’t need it to hold a gun, the trigger finger works nicely for pointing. Normally, I would have liked it if Hasbro threw in a gun, but instead we got something a lot cooler. 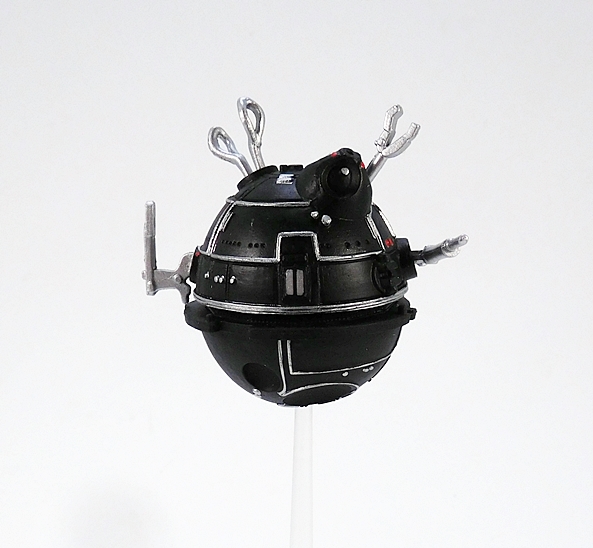 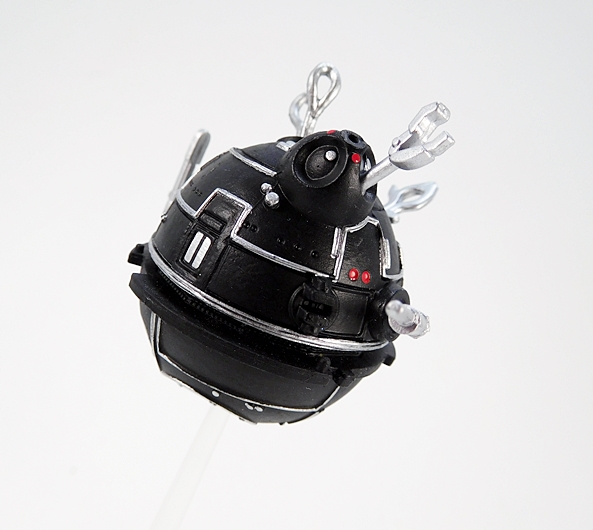 Yup, Tarkin comes with the Interrogation Droid! This black plastic ball of pain comes mounted on a clear flight stand with a ball joint so you can adjust it’s positioning a bit. It features a great amount of sculpted detail and some silver and red paint apps. It also has its various instruments of torture deployed, including a rather chunky version of the syringe it was going to use on Princess Leia. As far as accessories go, this one is fantastic! 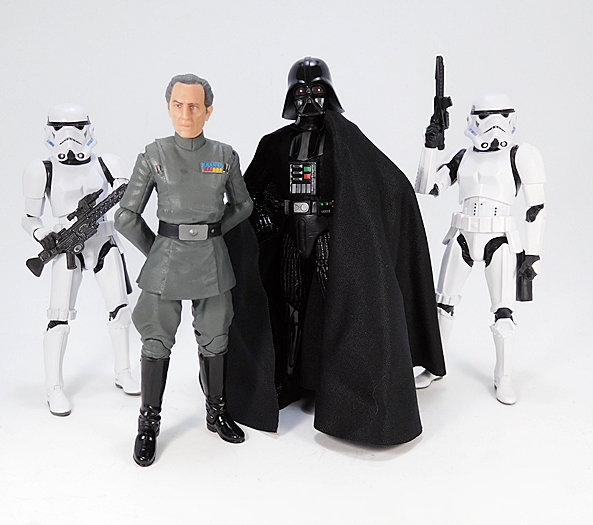 It’s possible not everyone is going to be as excited to get Tarkin as I am. There’s a fair amount of reuse and resculpt here, he’s a simple design, and he doesn’t exactly put the action in action figure. But as much as I love the character and the actor, I’d say this one was pretty high on my 6-inch Black Series Want List. Hasbro did a nice job on him and even stepped up the game by bundling him with the Interrogation Droid, and all in all he was well worth the wait. And yeah, I’m also pretty excited about the releases of General Veers and Admiral Piet. I’ll take as many top Imperial brass as I can get!