Welcome to another Marvel Monday! I’m used to posting these early in the morning right before I go to work, but now I’m posting them early in the morning right after getting home from work. Yeah, in case you missed the earlier disclaimer, I’ll be working nights on a project that will last until sometime in October and while I hope this will not effect content here, it’s certainly possible. But for now the show must go on and today the Wheel of Legends landed on the Sasquatch Wave for the second week in a row. Let’s check out Laura Kinney… X-23!!!

I have to say, this wave has been pretty great. In fact, there’s only one figure in this assortment that I wasn’t excited to get and I’m saving him for last. Oh, I mean… the totally random Wheel of Legends just hasn’t landed on him yet. Phew. Nice save on my part. Anyway, X-23 comes in a Deadpool branded package, which is a bit odd. In the past, Hasbro has changed up the branding on themed waves, and I’m not sure why they didn’t do that here, but I’m just going to throw the package out so it really doesn’t matter to me. A quick glance tells us there’s nothing in the way of accessories, but to make up for that, she does come with the giant Sasquatch torso Build-A-Figure part. 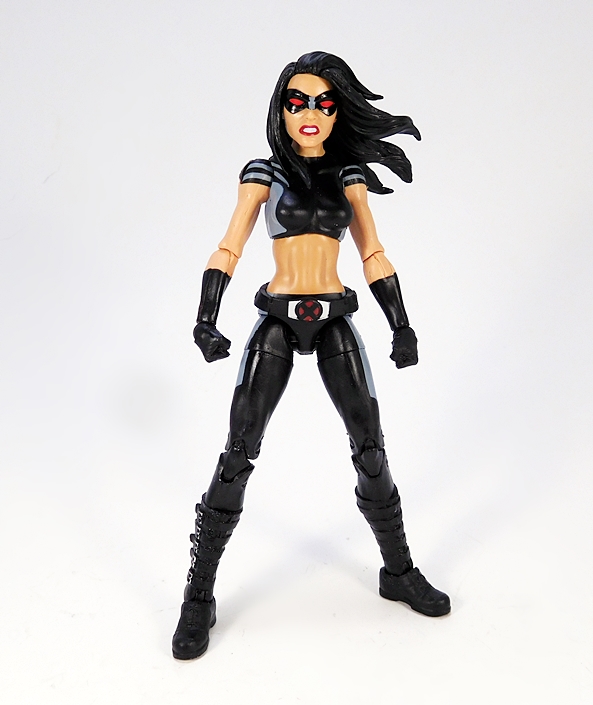 And here’s X-23 out of the package and the first thing I’ll say is how genuinely surprised I am that they didn’t go for Ms. Kinney in her Wolverine costume. Not that I’m complaining. I’m not a fan of that book, or Marvel’s bizarre insistence on replacing established characters. I am, however, a fan of her in the costume, so I wouldn’t mind getting that figure down the road. But, for now, we get X-23 in her X-Force Spec Ops outfit, which isn’t that far removed from what she’d been wearing before taking on the blue and yellow spandex. This is also fairly similar in design to the 4-inch figure we got a while back in the 2011 Marvel Universe line. 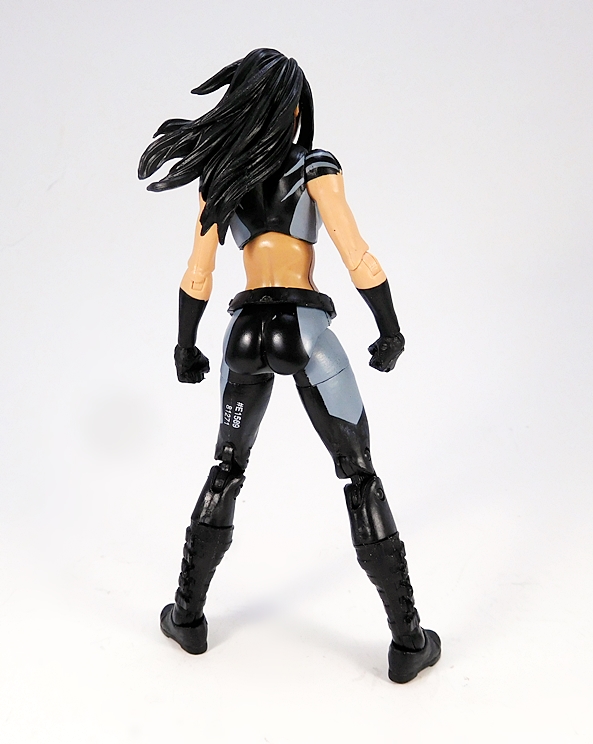 The bulk of the outfit is achieved through paint alone, although she does have some nice sculpted detail on her tall boots, including the straps that run up the sides, each with its own silver painted buckles. She also has a separately sculpted belt with the X-emblem on the buckle. The crop top is synonymous with several of her modern looks, but the gray bits really call out the X-Force look. The paint lines are overall pretty clean with a few minor flubs here and there. Unfortunately, there is a rather unsightly seam running up the side of her exposed midriff. Too bad they couldn’t have concealed this better. 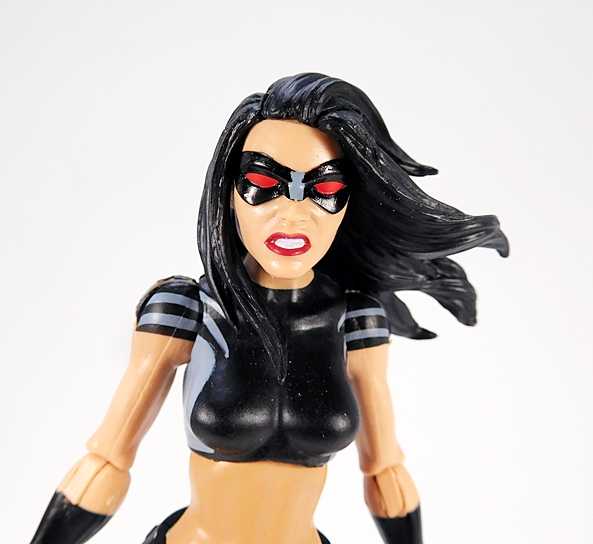 I really dig this head sculpt a lot. It feels maybe a tad big for the body, but that might be because of the copious blowing hair. I’m not always a fan of the windblown look with sculpted hair, but I do like it here and I haven’t found too many poses where it gets in the way or looks out of place. The expression is pure rage with her teeth gritted as if she’s about to plunge her claws into someone, and I’m certainly cool with that. I will admit, I’m not a huge fan of the grey stripe on her mask, but that’s more an issue I have with the costume design than with the actual figure. All in all, really nice work here. 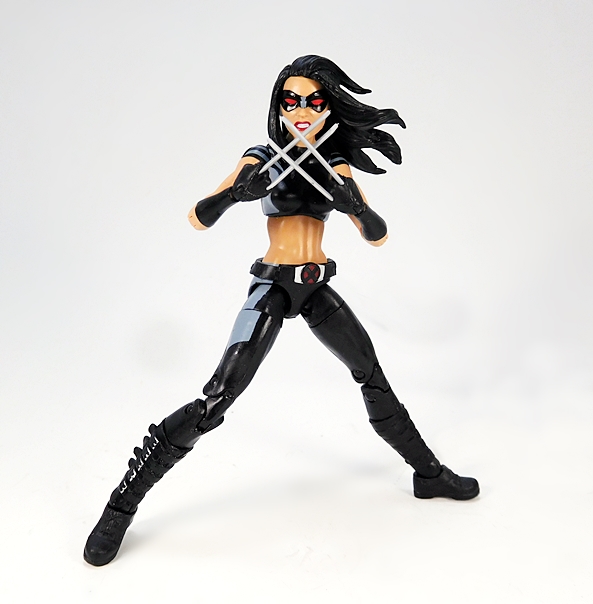 As with previous Wolverine figures, X-23’s claws are simply slotted into her hands, so they can be removed and added to allow for both display options. They’re pretty stiff and not too bendy, which is always a good thing. But what about her other claws?

Yeah, clearly the most obvious misstep here is that she doesn’t have her foot claws. I’m only mentioning it now, but it was the first thing I noticed when I took her out of the package. I hadn’t seen any reviews of this figure and since her feet are obscured by the Deadpool logo, I honestly expected them to be there. Even after I got her out of the package, I was looking in the tray to see if they had fallen out, but nope… she just doesn’t have them. Now, I’m not up on my X-23 funnybooks, so maybe there’s a reason for this in the official canon, but my guess is that Hasbro just didn’t include them on the figure for some inexplicable reason. 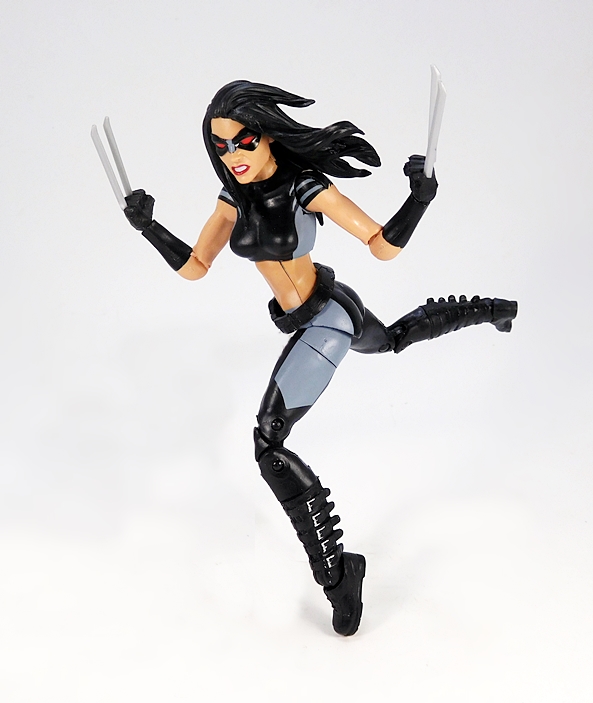 The articulation here is pretty good, but I have a few minor complaints. The arms feature those weird rotating shoulder hinges, which just don’t look all that natural. Otherwise, you have the regular rotating hinges in the shoulders and wrists. The legs have ball jointed hips, swivels in the thighs and at the tops of the boots, and double hinges in the knees. The ankles have both hinges and lateral rockers. There’s a ball joint under the chest and the neck has both a hinge and ball joint. Ms. Kinney is generally a pretty agile character, so the articulation here isn’t quite up to the task of all I’d like her to be able to do, but as far as the Legends line goes, it’s acceptable. 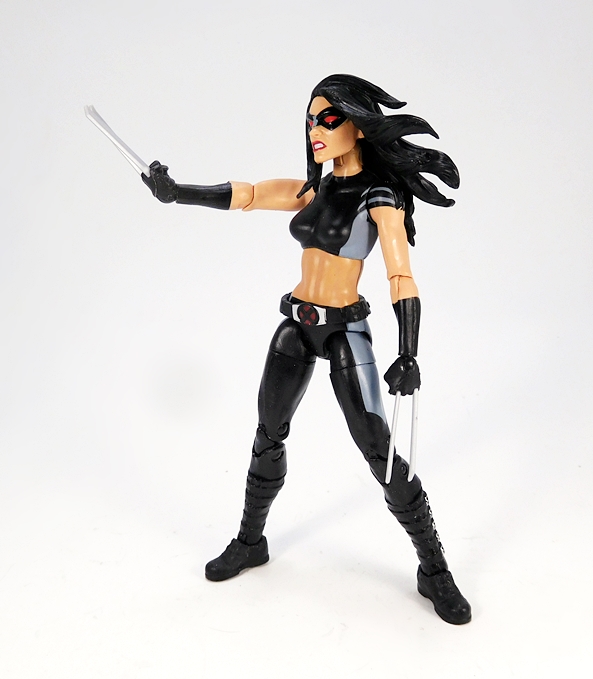 And so, X-23 takes her place as another really solid figure in a really solid assortment. I wouldn’t mind getting a few repaints out of this one, maybe Hasbro can whip up a striped top variant to take another $20 away from me. Whatever the case, I was happy to see them dig a little deeper here rather than go with a current comic that I’m just not into at all. Then again, I’m sure I’m going to buy the Laura Kinney Wolverine whenever they get around to it anyway. And that leaves just one more figure in this wave before I can build Sasquatch. But next week, I’ll be tossing randomness to the wind and taking a look at one of the Marvel Studio: First Ten Years figures!