It’s weird to still have Toys R Us exclusives in play, what with the company folding this year. I didn’t get all emotional about TRU closing, because visiting the nearest one was a two-hour round trip and it was so poorly maintained that it was never worth the effort. Obviously, I’d rather they stayed open so people didn’t have to lose their jobs, but what can you do, eh? In any event, a few weeks back, I picked up this TRU Exclusive 2-pack on the cheap from Amazon, and I’m finally getting around to opening it up today. Let’s check out Admiral Ackbar and the First Order Officer! 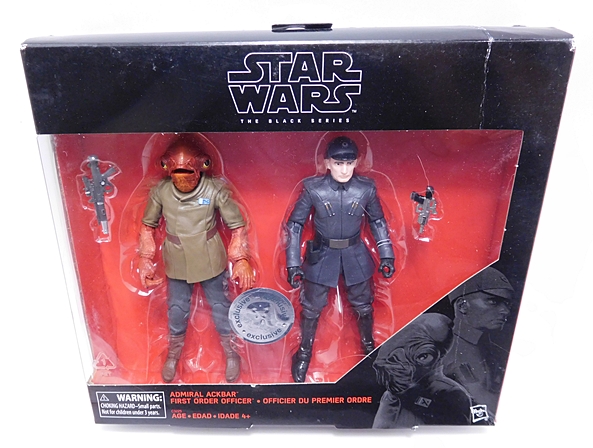 The figures come in a window box that’s pretty typical of the Star Wars Black Series from the red backdrop behind the tray right down to the monochrome character art. You also get the silver foil TRU Exclusive sticker on the window, which may very well be the last one of these we see here at FFZ. I’ll also note that my box looks like it’s been punted around the backroom a couple of dozen times by disgruntled soon-to-be-ex-TRU employees. But that’s OK, I don’t save these packages and at the price I paid for this set, they could have just wrapped the figures in old newspapers for all I care. Let’s start with mah-boy Ackbar! 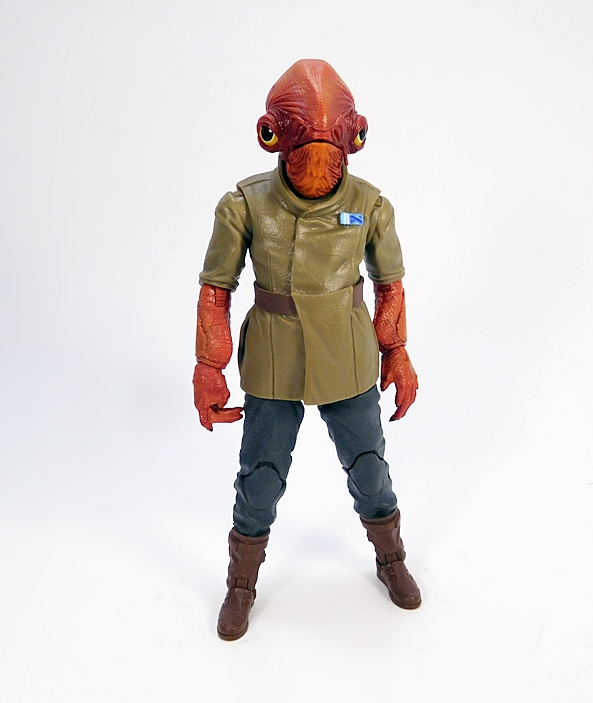 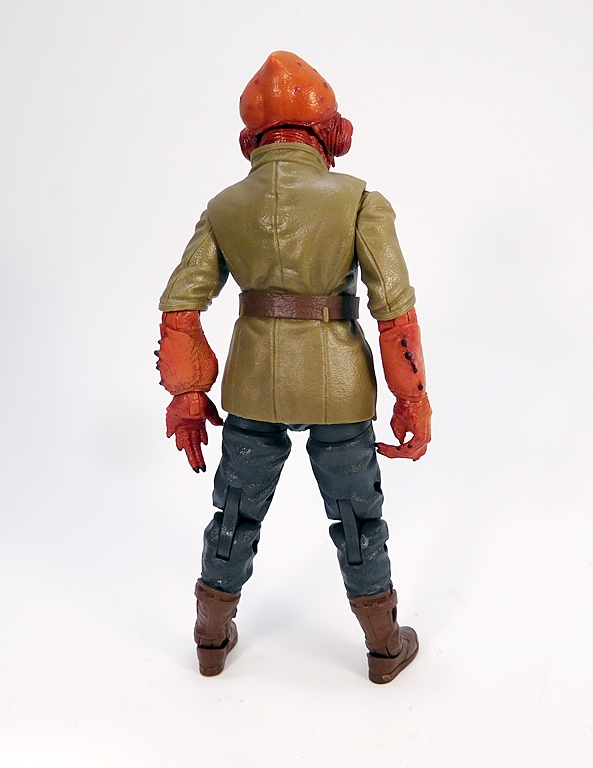 It’s kind of weird that we’re getting Ackbar from The Force Awakens before a Return of the Jedi version, but I’m sure that one will be coming down the pike soon enough. In this case we get the Mon Calamari Admiral in his Resistance uniform and while it’s kind of drab compared to the duds he was sporting in Jedi, it’s still a good look for him. His costume consists of a pea-soup colored tunic, which has a sculpted rank or ID badge on the left side of his chest. The plastic garment looks like it’s made to secure behind a sculpted front flap, which spills over his belt, concealing where the belt buckle would be. The rest of the outfit is rounded out with a pair of blue trousers and brown boots. I always thought it was weird that the Mon Calamari have giant fish heads and flipper arms, but normal feet. Indeed, Ackbar’s feet are kind of tiny, but he still stands just fine. There’s some really nice sculpted detail and texturing on his forearms and hands too. 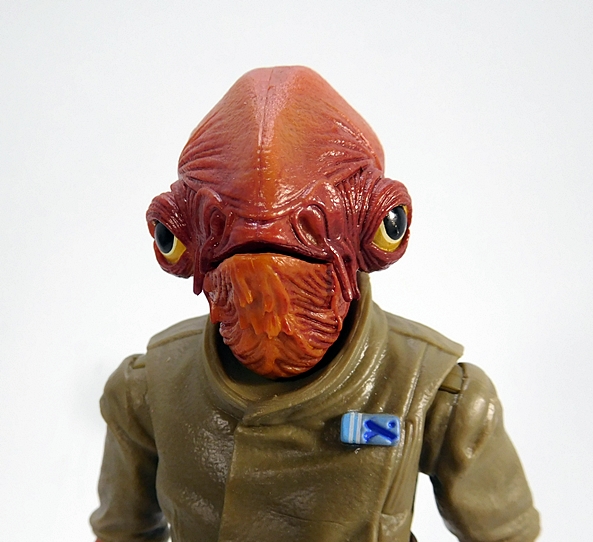 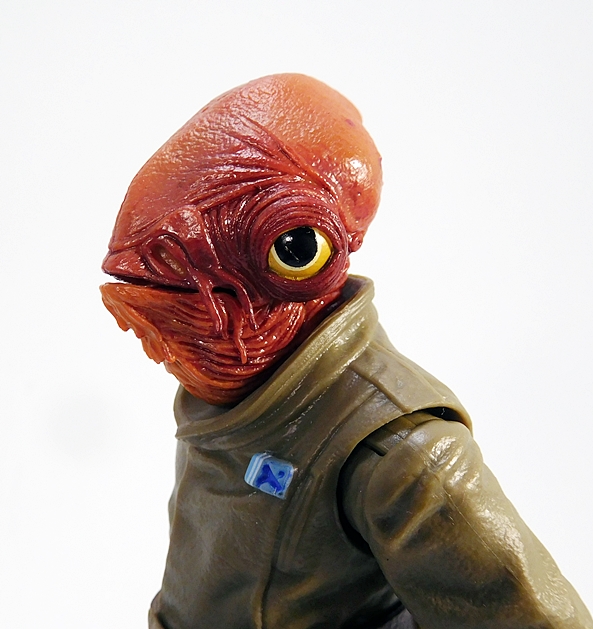 But it’s the head sculpt that really sells this figure, as Hasbro did a beautiful job on him. That probably shouldn’t come as any surprise, because as much as I rag on the mediocrity and poor likenesses of the 6-inch Black Series, they almost always do a fine job on the alien portraits. Ackbar here is certainly no exception. They recaptured Ackbar’s fishy noggin in every little detail. I’m especially impressed by the ribbed area round his lower face and those tendril-like whiskers that hang down from his nose. And as fantastic as the sculpt is, the paintwork elevates it even more. The glossy finish on the red gives him a bit of a wet look and the gradient shades of red make for a pleasingly complex finish. The eyes are also perfect. 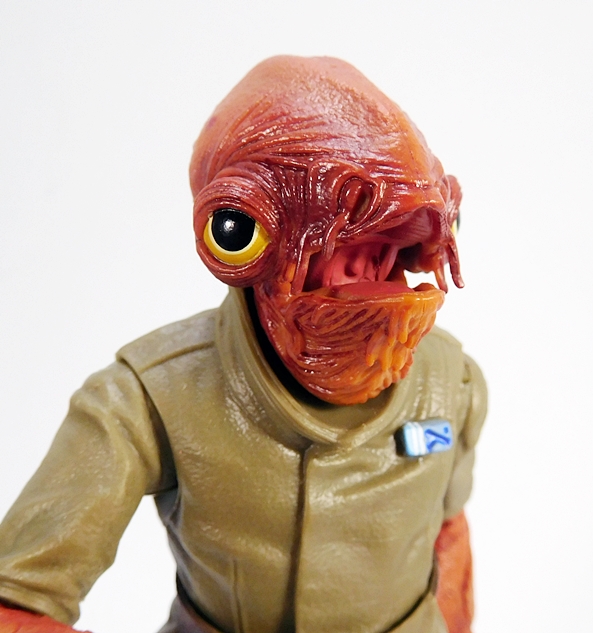 And if all that wasn’t enough, Ackbar even features an articulated jaw. I was not expecting this, but what a pleasant surprise! The hinge is really well hidden and I’m happy to say that adding this gimmick doesn’t take away from the head sculpt at all. 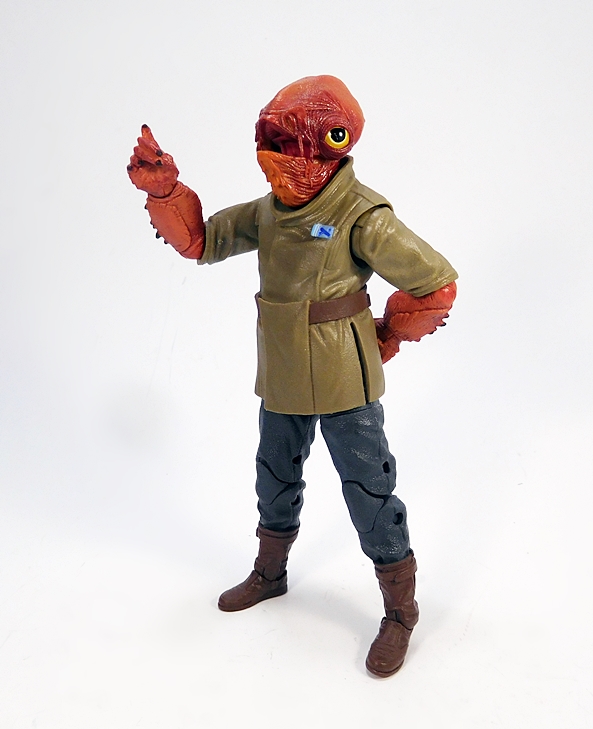 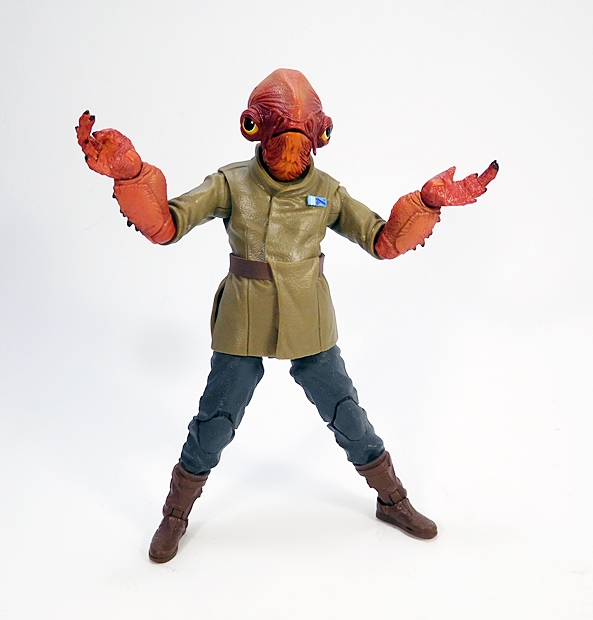 I’d like to think Ackbar was some kind of badass action hero in his younger days, but this is older Ackbar and as an Admiral, he doesn’t need to do much besides sit in a chair and bark orders. Still, he has decent articulation if you want to give him something more to do. Rotating hinges in his shoulders, elbows, and wrists allow him to do the standard, arms behind back pose that suits these officer-types so well. The legs are ball jointed in the hips, have double hinges in the knees, swivels in the thighs, and the ankles are both hinged and have lateral rockers. You get a ball joint in the torso, and the neck is ball jointed, but I don’t think there’s a hinge in there. As a matter of fact, I can’t get much movement out of his neck at all. 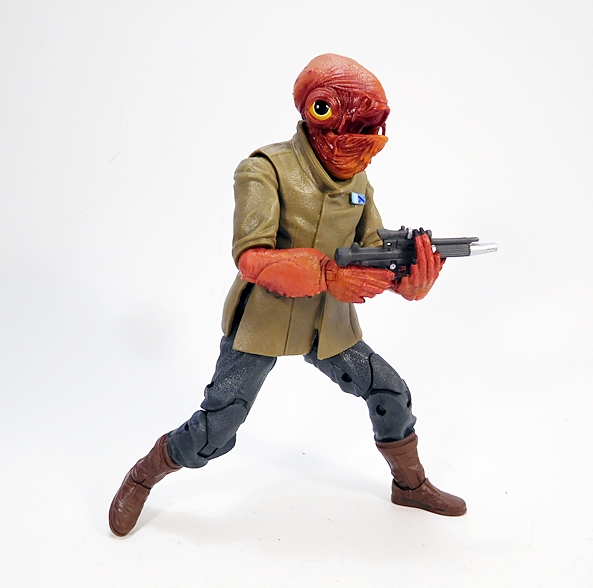 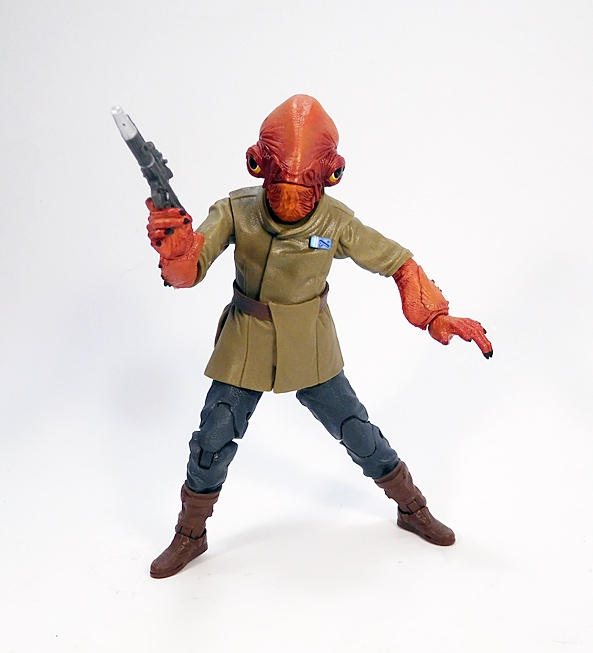 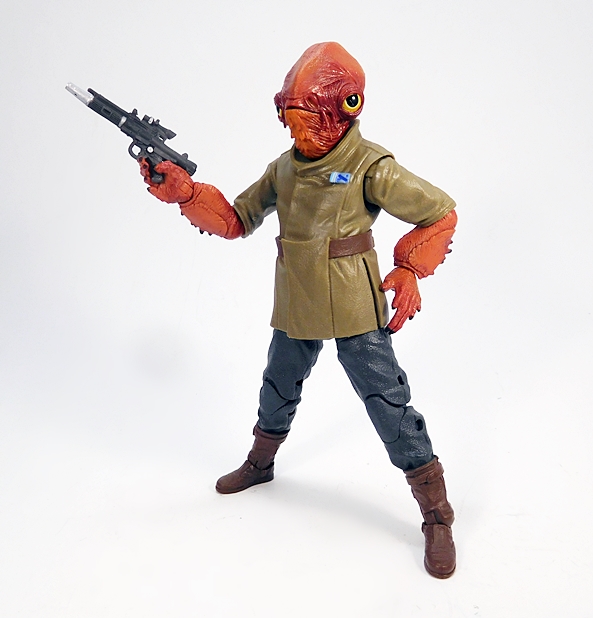 Ackbar does actually come with a blaster, and I’m always down with that. This one looks like it’s supposed to be an offshoot of the DH-17. I don’t know what happened to Ackbar’s little swagger stick. Maybe he just doesn’t use it anymore. Or maybe the Resistance is more of a rough-and-tumble kind of outfit that requires even the Admirals to be armed. Either way, I really dig the design of this little pistol and while Ackbar doesn’t really have a trigger finger on that flipper hand, he can hold the gun quite well. Alas, there’s nowhere to store it on his person. I would have liked a loop on the back of his belt to tuck it in there, so he could pull it out and repel boarders on the bridge of his Capital Ship. Whatever the case, Ackbar is a fantastic figure, and I would have been perfectly happy getting him as a single boxed figure. And that brings us to the First Order Officer… 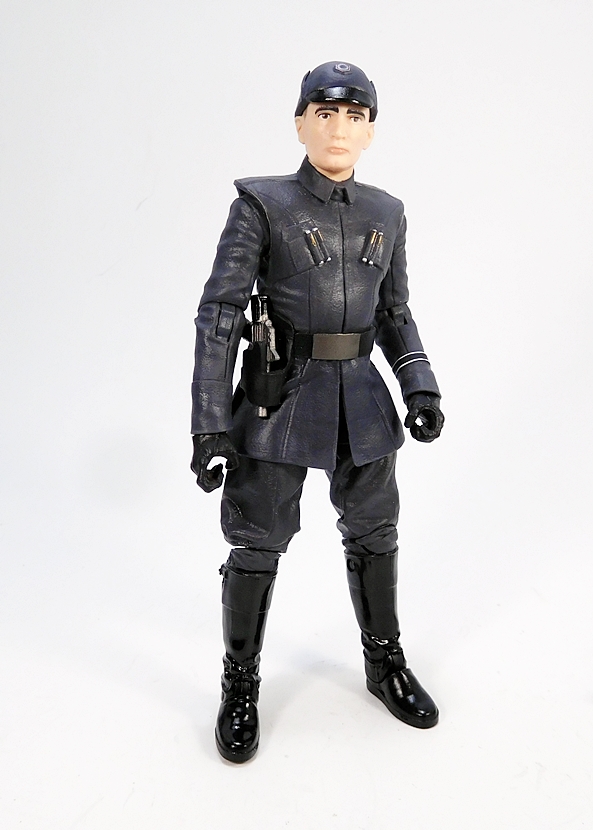 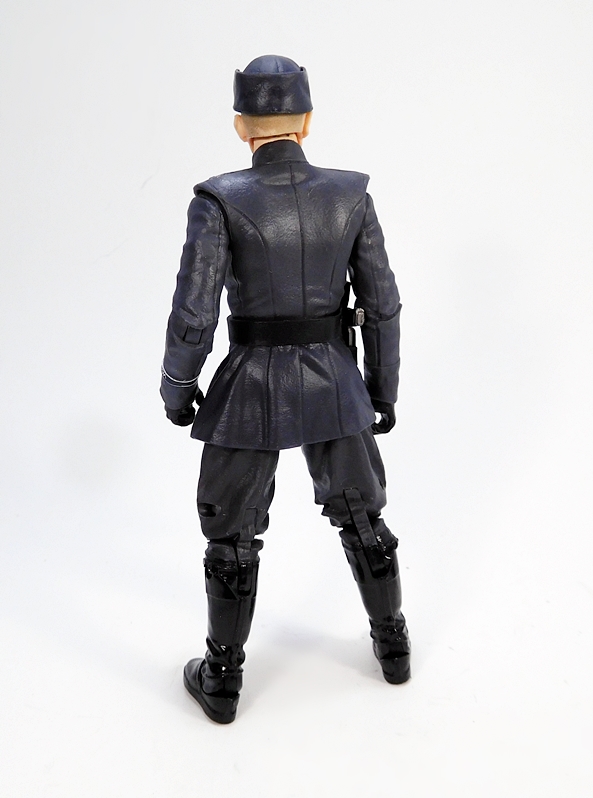 Don’t ask me why, but I love getting figures of Imperial, or in this case First Order, Officers. Maybe I have a delusion that someday Hasbro will release an Imperial bridge as a playset and I can populate it with all sorts of top brass. I doubt that’s going to ever happen, but it won’t stop me from snapping up these officers every time I see them. I have no idea what this fellow’s actual rank is, but he’s wearing a sharp-looking uniform that looks like it’s a very dark charcoal in color with shiny black boots. I really love the sculpted tunic on this guy. It has flared shoulders and it’s belted with one of those wide belts with a big slab of belt buckle, which hasn’t changed much from the Imperial days. He has two sets of rods on his chest, which I’ve been told are some kind of security keys, and he has a sculpted band around his forearm with white edges. The outfit is rounded out by a holster on his right side. 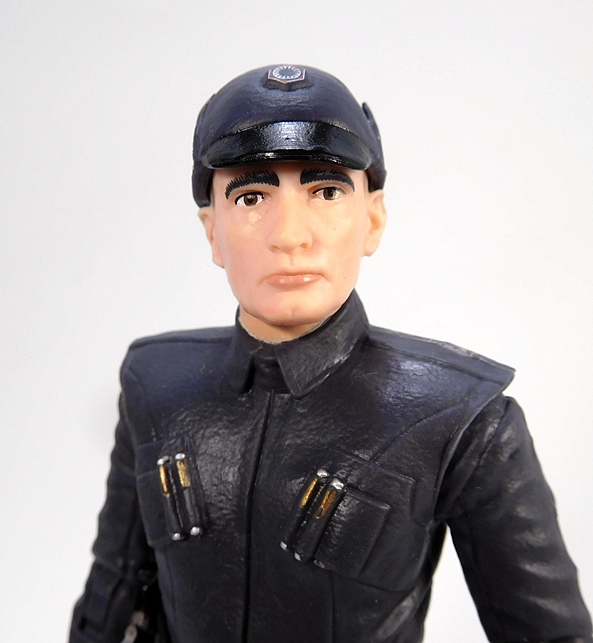 For the head sculpt, Hasbro did a pretty decent job giving us Generic Officer Man. I actually think the sculpt itself is actually quite good. He’s got more than a bit of personality in there, from his pouty bottom lip to the little cleft mark in his chin. As usual the very basic paint lets the sculpt down. His eyebrows look extra cartoony and while his eyes are fairly neat and straight, they don’t lend a lot of realism to the portrait. My only other complaint would be that the skin tone is really pale. 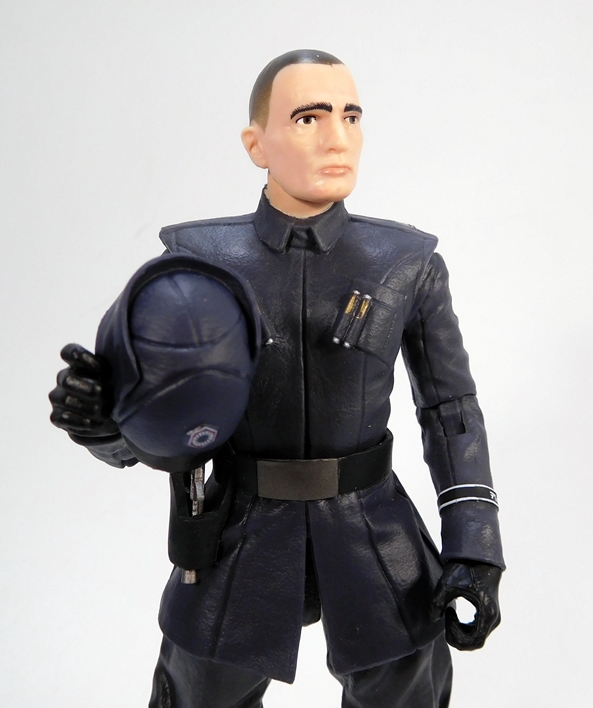 Much like Ackbar’s jaw, the First Order Officer also hides a pleasant surprise and that’s his removable cap! Under the cap, he’s just got a buzz cut painted on with no actual sculpted detail on the hair. But that’s fine, because it means the cap fits the head so well that I didn’t even think it was removable. Besides, the military style cut suits him. 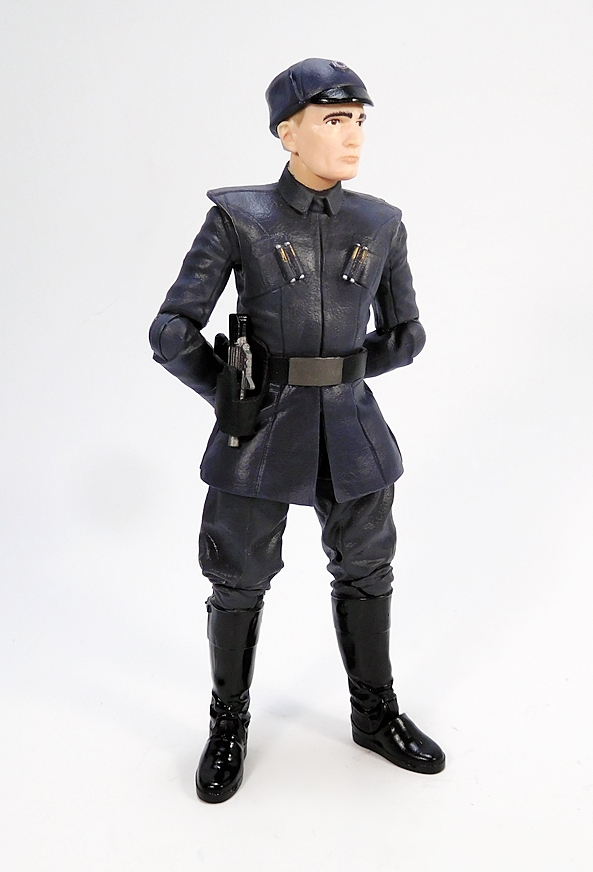 The articulation here is identical to what we saw with Ackbar, minus the hinged jaw of course! He can take some solid poses, but like Ackbar, I don’t anticipate these fellows seeing a lot of action, unless their ship gets boarded or Poe makes an attack run and they have to scuttle off to their escape pods. 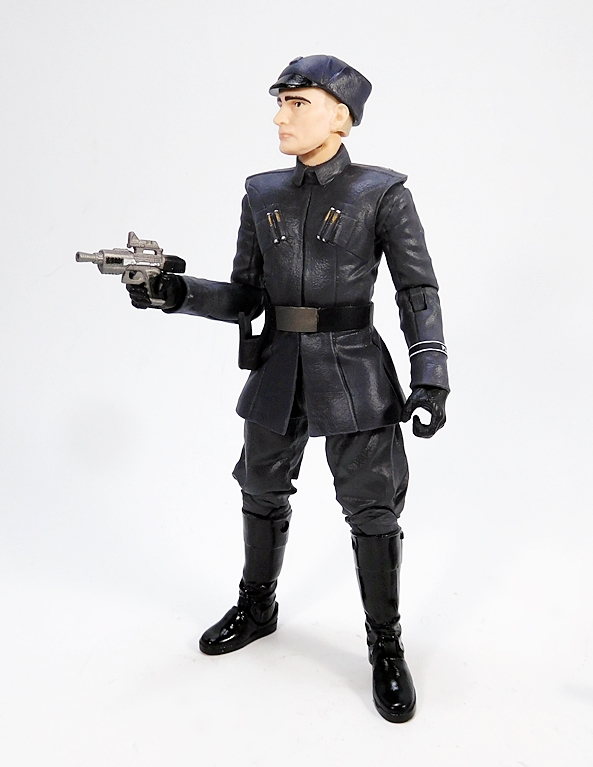 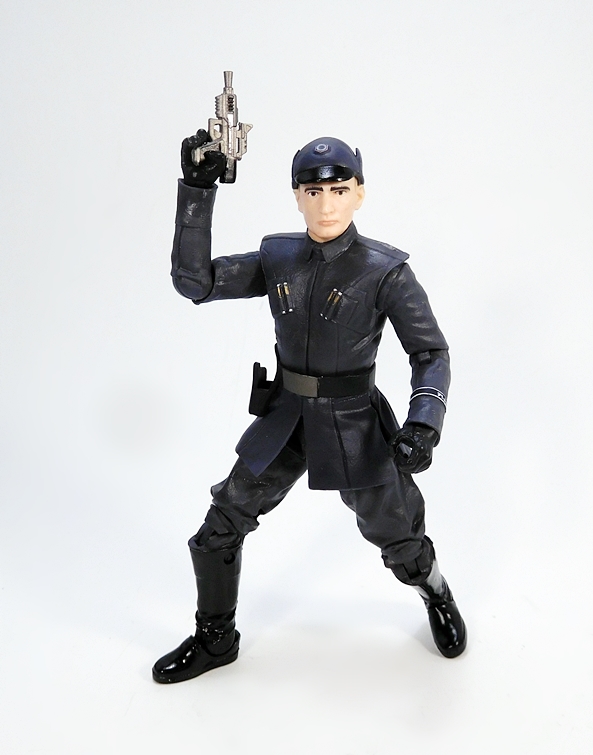 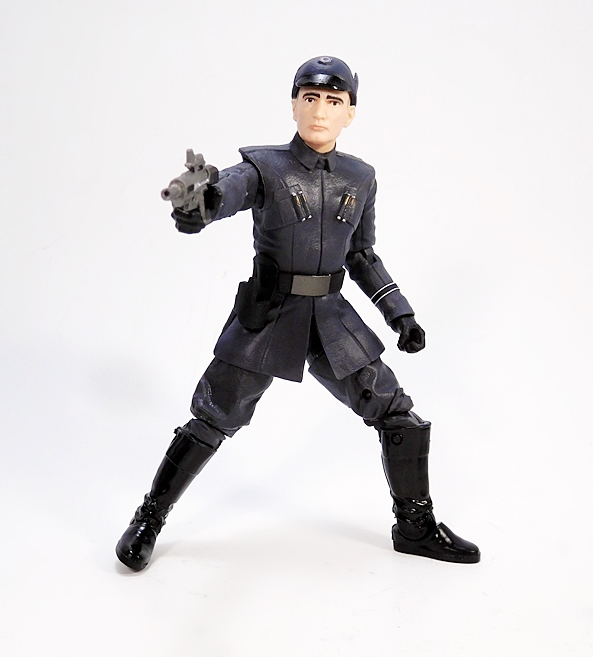 The First Order Officer comes with a pistol, which fits nicely into his holster, and can be held in either hand. As with a lot of weapons in The Force Awakens, this one is a pretty unique and interesting design. 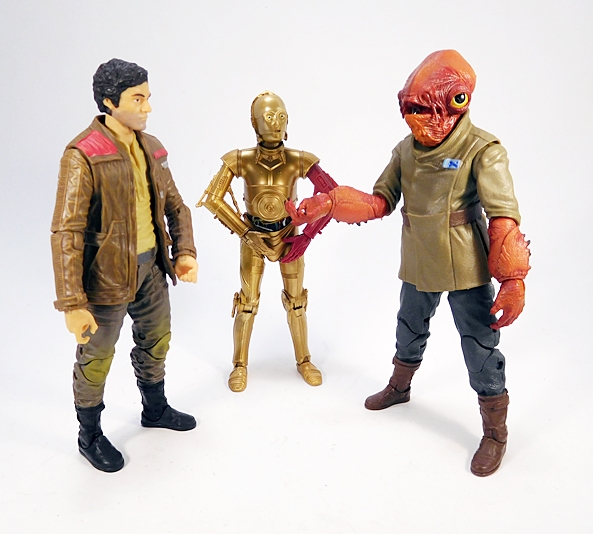 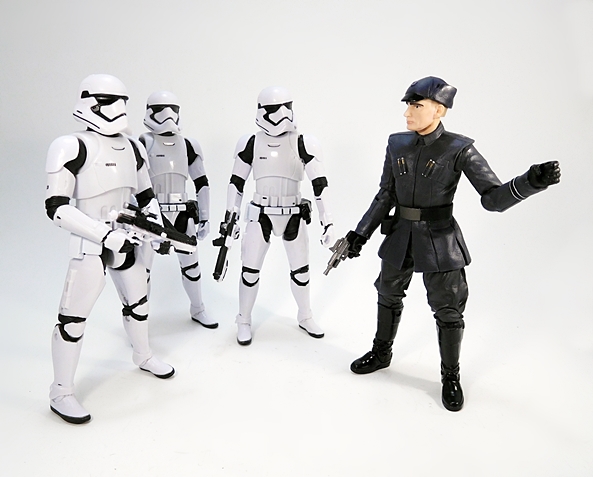 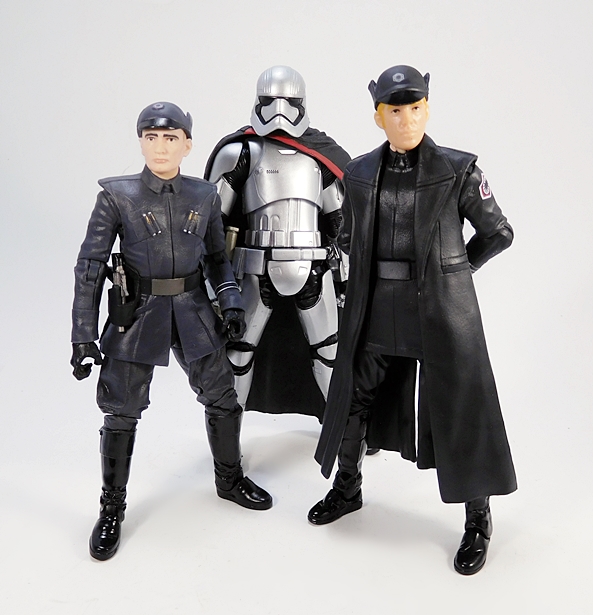 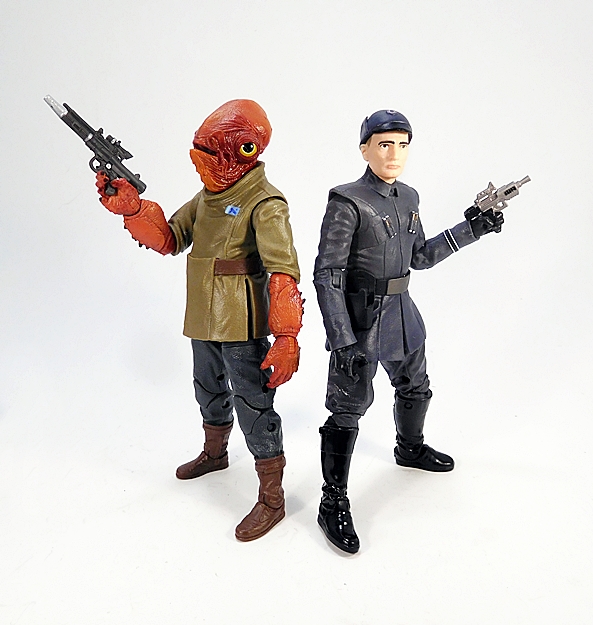 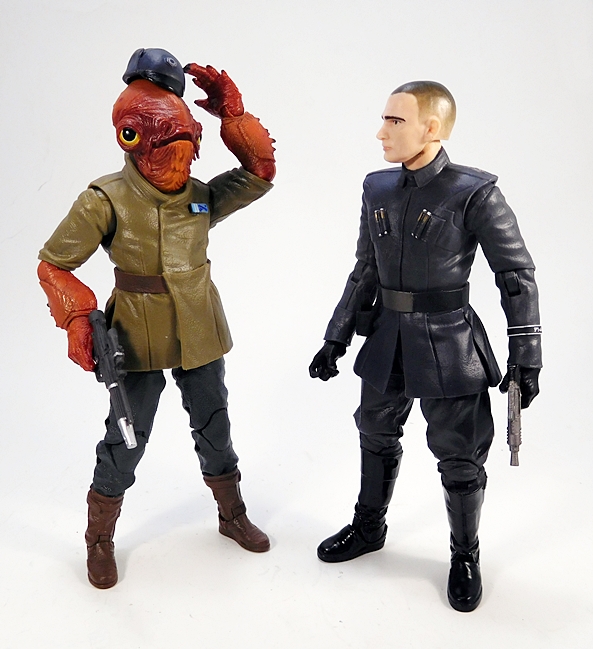 Originally I was going to pass on this two-pack, because I had no chance of finding it at a Toys R Us and other places online were selling it for around $45 and that was just more than I wanted to spend. I was ultimately able to pick it up on Amazon for $18 and even at that price I found myself really thinking over whether I actually needed it. In the end, I’m really glad I picked it up. It’s definitely worth it for Ackbar alone. He’s a fantastic figure, but the First Order Officer is no slouch either. And yes, I’ll happily buy another Ackbar when Hasbro gets around to doing a Return of the Jedi version!