It’s been a hard fought battle, folks, but I finally got a full set of the Power of the Primes Dinobots and today I’m opening up the last one, which just happens to be Snarl. I never had his toy as a kid, and since Fansproject snubbed him when it came to their Lost Exo Realm Not-Dinobots, I don’t even have a third party version. Needless to say, I’m pretty excited to pop my Snarl cherry. Eww, that sounded all kinds of wrong. 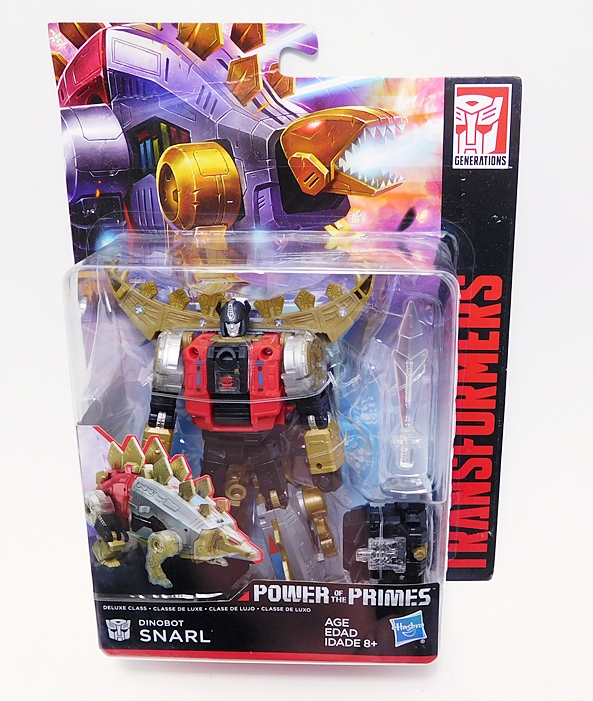 I don’t have much new to say about the packaging. It looks good, I like that they used the Dino modes as the character art for these figures. I also really dig how the bubble insert has a picture of the toy in his Dino mode right in front of the figure packaged in his robot mode. I’d say that as a character Snarl has been my least favorite of the Dinobots, but that’s not something he should be ashamed of, because somebody had to come in last even in a group of awesome Dinosaur robots! Let’s start with his alt mode… 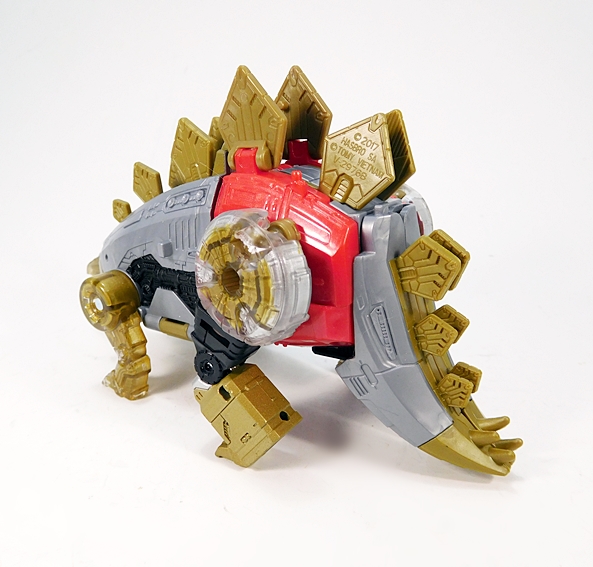 When I was a kid this was called a Stegosaurus. Have the dinosaur scientists changed this yet? It seems like they’re always telling me the dinosaurs I grew up learning about never existed or they changed the names or some such nonsense. Pfft… Science… am I right? Anyway like all the PotP Dinobots, Snarl has a fantastic alt mode that pays respects to the original toy. And while I think he tends to be the least photogenic of these Dinos, I still think Hasbro did a great job on him. There’s plenty of sculpted detail in his body, from vents and panel lines to various other ports and mechanisms. They even remembered to put the tiny spikes at the end of his stubby tail! It kind of sucks that they decided to stamp copyright bullshit all over the outside of one of his back plates, but whaddya gonna do, eh?

The coloring is also spot on. You get some gray and red plastic making up the bulk of his body, both of which do a nice job of matching the colors on the original toy. He also features clear plastic over gold and silver to mimic that rather distinctive effect that the original Dinobot toys had. OK, I actually don’t remember Snarl showing that off too much, but I like that they included it here to make him match the other figures better. Snarl also includes some matte gold, which isn’t as snazzy as the metallic gold on the original toy, but it looks fine. The deco is rounded out by some black plastic on the side panels and rear legs, and some tampos on his back. He looks a little more patchwork in design than some of the other Dinobots, but I still dig him. 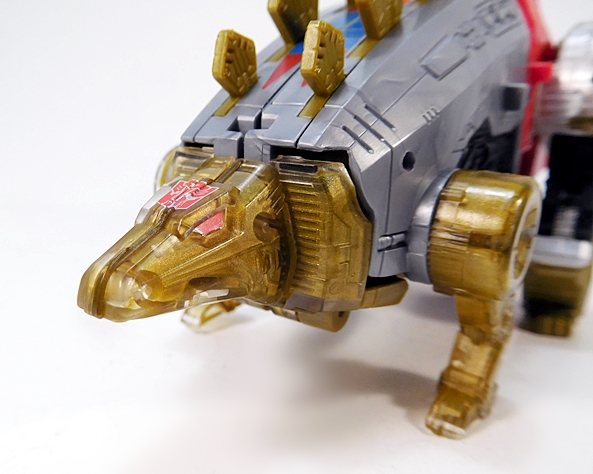 Articulation in Dino mode features basic stuff. The back legs connect to the body with ball joints and have hinges about halfway down. The front legs just rotate at the body. There’s no articulation in Snarl’s jaw, but two of his back spikes can hinge down and have footpegs to allow some Titan or Prime Masters to ride on his back. Cool!

And you just know that I have to bring up the size and how diminutive these Dinobots are, so let’s do it! Here’s a shot of Snarl’s Dino mode next to Chromedome from Titans Return in his Auto mode and I just can’t accept this. I think this mold would have worked fine as a Voyager Class and I really wish Hasbro had gone that route. But I’ve said all this a bunch of times already, so let’s move on to the robot mode…

All of the PotP Deluxe Dinobots have had solid robot modes and Snarl carries on that tradition nicely. The front half of the Dino mode becomes the legs, with the front Dino legs on the sides and the head spit and tucked behind them. I like how the spine bits run up the front of his legs. Snarl advertises his combiner port in the center of his chest, but to be honest it works with the overall look just perfectly. He also features an Autobot insignia stamped in the middle. Easily the most distinctive thing about Snarl’s robot mode is the way his tail splits and arches up behind his head and shoulders like a crescent moon. The deco is largely in keeping with the alt mode deco. I dig the gold forearms and the way the colorful tampos on his Dino back wind up front and center on his robot legs. He also has a few more tampos on either side of his chest. 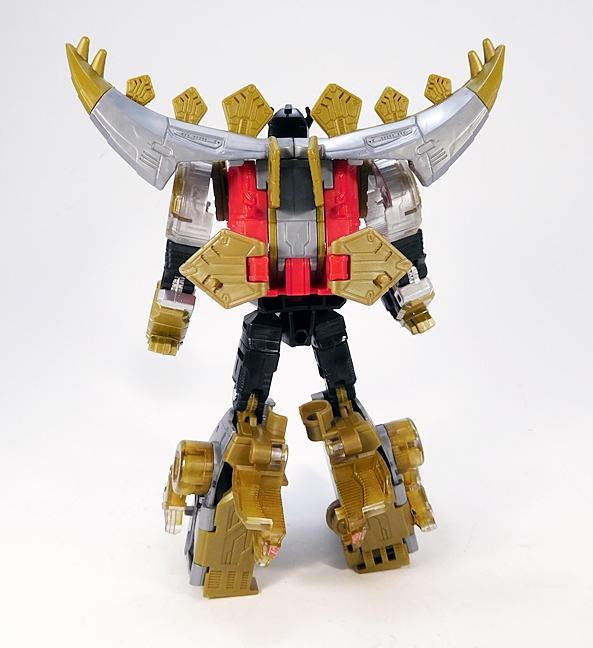 From the back things aren’t too bad. I’d say the most unsightly thing here are the halves of the Dino head that hang off the backs of his legs, but as far as kibble goes, it’s not awful. I should note that I really dig the proportions on this guy, and that’s been the case for all the Deluxe PotP Dinobots.

The head sculpt is excellent, although I’ll confess to not being all that attached to Snarl’s likeness in the cartoon or comics. He has a very human-looking face, painted with brilliant silver and two neatly painted red eyes. I also dig the horns that come up off his “helmet.” They go well with the spiked crescent behind his head. 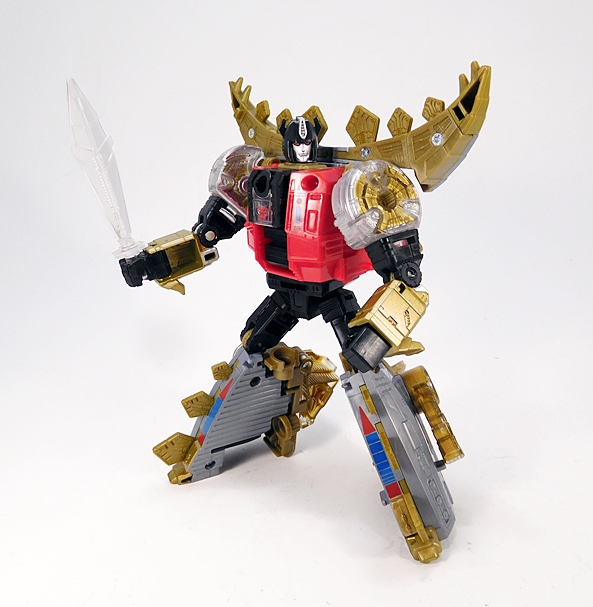 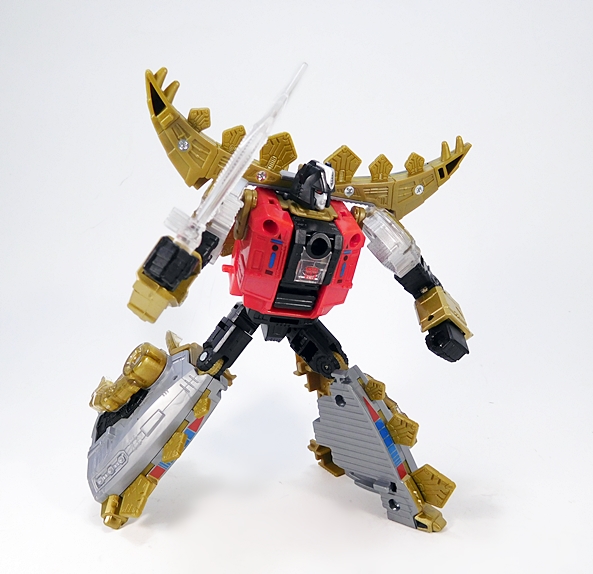 One of my gripes about these Dinobots has been their weapons. We all know by now that Grimlock didn’t come with a gun or a sword, which was criminal. As for these Deluxe figures, Hasbro basically sculpted a single gun and a single sword, and gave two of the figures guns and two of them swords. Snarl’s sword is cast in clear plastic, but otherwise it’s the same as the one that came with Swoop. I like the design, but it looks kind of puny in his hand. I’m also not a big fan of the clear plastic. I’d rather they just gave us another red one, or even better painted them both silver. Of course, Snarl also comes with a Prime Armor piece, which I’m going to totally ignore.

Shall I bring up size one more time? Why not. Here he is in robot mode with Chromedome and while his tail crescent actually does make him a bit taller overall, he still looks so undersized to me and even kind of puny. Chromedome looks like he’d have a fair chance taking down Snarl in a fight, and that shouldn’t be the case.

I can’t stress enough how much I love these figures on their own. They really are great little modern updates to the original Dinobots, keeping the iconic aesthetics but adding articulation and play value. Just having them all together on the shelf is making me so happy because I never owned a full set of the original Dinobots, and these guys look amazing together. It’s only when I display them with other Transformers that I get bummed out because of how small they are. I’m not inherently against the idea of Dinobots as a combiner team. It kind of makes sense, but I can’t help but feel sacrifices were made in favor of that gimmick and if Hasbro hadn’t gone that route, maybe we could have had these as Voyager Class figures with Grimlock as a Leader Class. Man, that would have been so cool!  Oh yeah, and in case you’re wondering, I’m not going to be reviewing the combined form of these guys. I just really don’t care enough and I don’t think the end results warrant the effort. It’s possible some day I’ll invest in a Third-Party upgrade kit, and if that’s the case I’ll look at Volcanicus as a means of reviewing the kit, but for now I’m going to leave it at that.