The Predator hit the theaters a couple of weeks back like a wet splat. I saw it on opening night and I really enjoyed it, but I could easily see why a lot of people didn’t. Even if the newest film in the franchise didn’t feel like it was edited in a blender, let’s face it, the original Predator is damn near a perfect film and I hold the second in very high regards, but everything after that has sucked hard. Maybe my expectations were low, but at least I had fun seeing this one. But forget about the movie, today I’m talking comics. Sure, I will be reviewing some Predator figures from the new movie, but in the meantime, I picked up today’s figure from a Twitter buddy and thought I’d have a look at him before the new ones start rolling in. 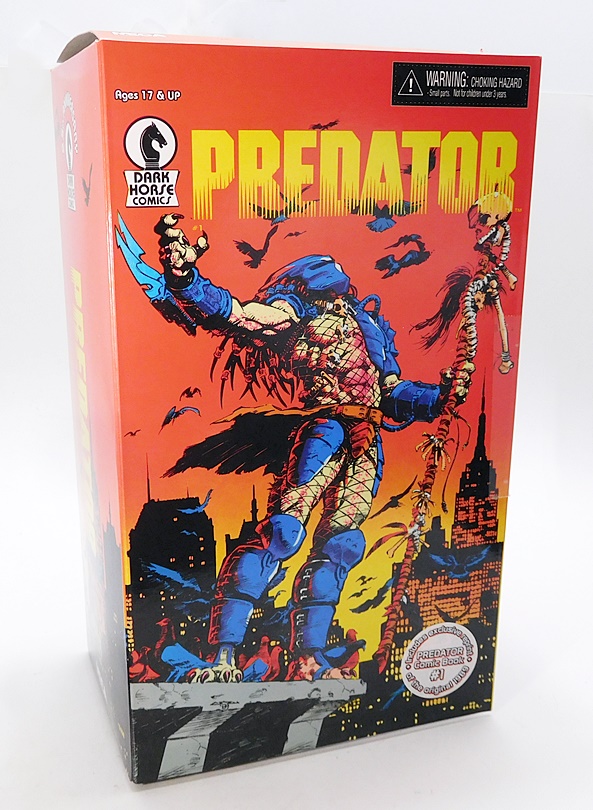 The box has seen better days, but it’s still a thing of beauty. Like a forerunner to NECA’s Ultimate Series, this Predator comes in a colorful and collector friendly box with the front panel recreating the brilliant cover art from The Concrete Jungle, Issue #1. On cold dark nights, I still have nightmares about the day I was moving out of state and I gave a huge box of comics to my brother’s girlfriend’s brother and this issue was in it. I spring awake and then scream because only then do I realize it really happened and wasn’t just a horrific dream. Oh well… live and learn. In addition to the cover art, the box also has some comic panels from the Dark Horse comic series. 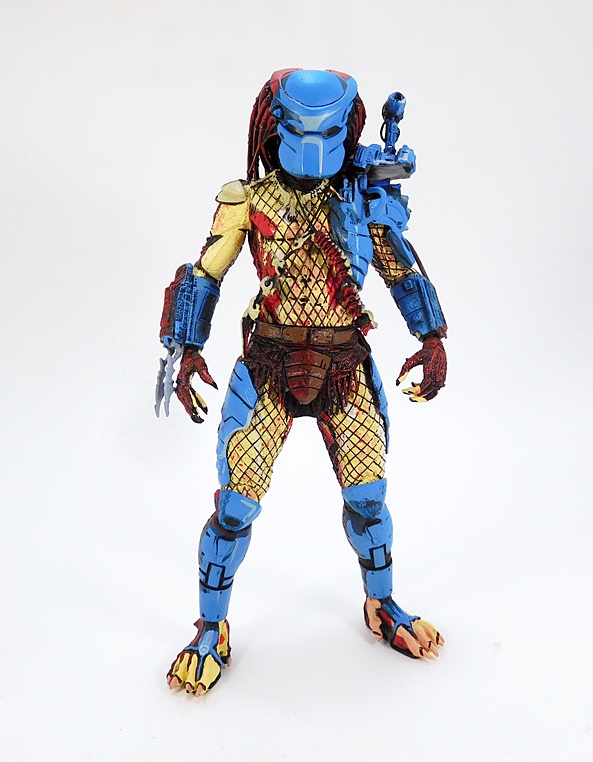 NECA has created quite a little niche by creatively repainting their figures to reproduce their look in both comics and video games, and that’s exactly what we’re looking at here. I don’t own all of NECA’s Predators (far from it!), but I think I’d be safe in saying that the majority of the parts and sculpting on figure has been used before. The figure’s deco makes brilliant use of some blues and reds to simulate the coloring of the cover, along with some silver paint hits to further simulate the art. It not only works well as a recreation, but I think the colors look particularly striking on the figure alongside the Yautja’s yellow skin. Additional black paint is used to pick out some of the details in the leg and arm armor. 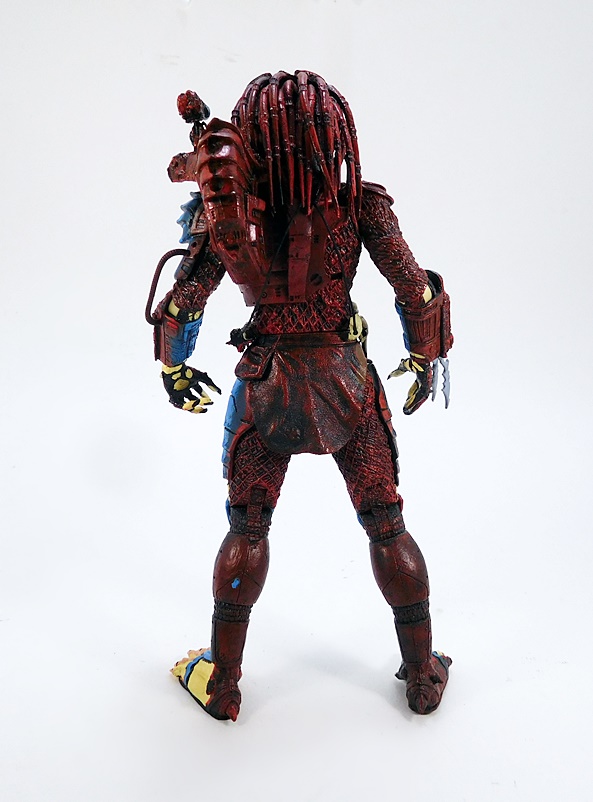 The back of the figure is bathed in a deep crimson shadow with black wash, save for that one blot of blue paint that landed on my figure’s left leg. The back is intended to soak up the shadows from the comic cover’s mostly red field, which makes this a figure that is best viewed from the front or a front-focused angle, in order to make the comic inspired paint effect really work. 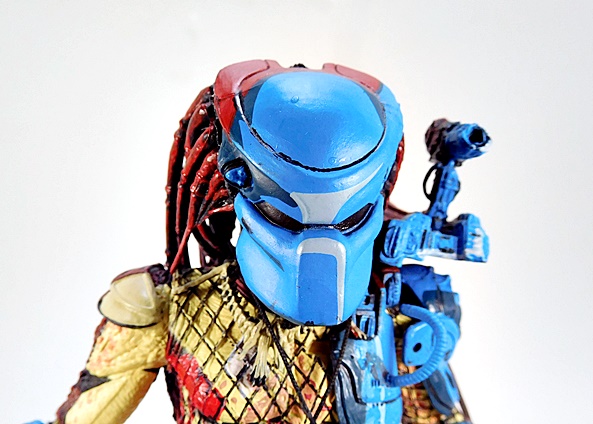 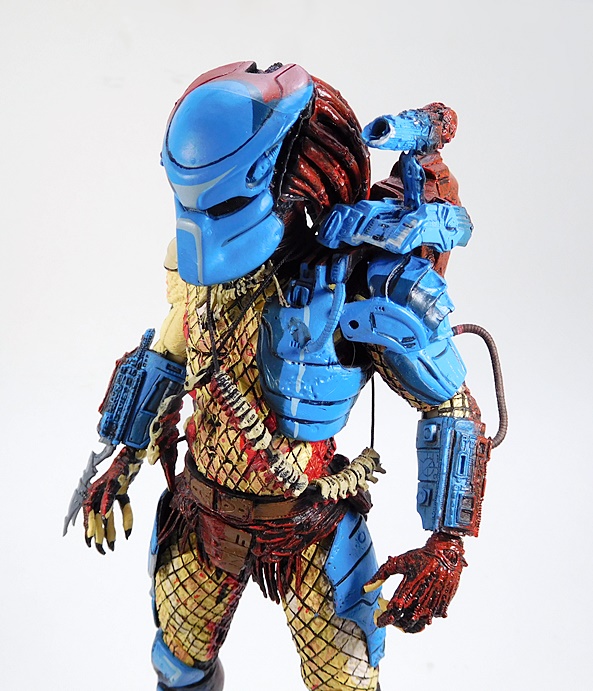 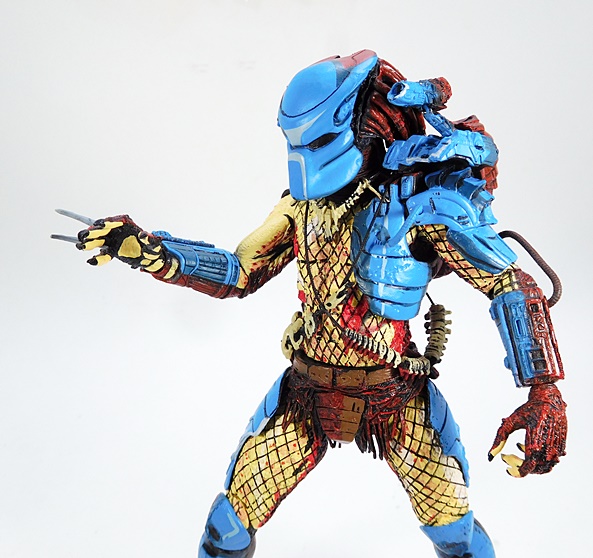 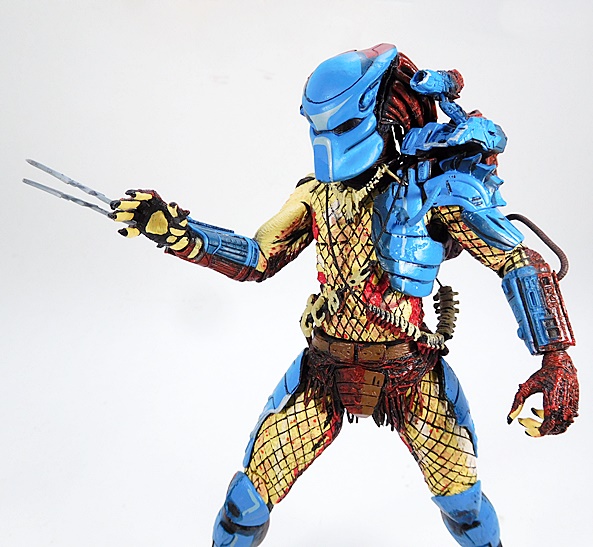 That’s not to say that this figure is all about the paint job, because the sculpt is quite spectacular too. What can I say? NECA knows their away around Predators and their gear and here it really shows. The attention to detail on the arm bracers is particularly well done, although the left arm computer doesn’t actually open on this figure like it does on a lot of their regular Preds. The right arm bracer also has a bunch of sculpted detail and the blades will extend and retract. He has a sculpted leather belt, complete with detailed stitching and he also has a pair of bone trophies on strings that crisscross his chest. The plasma-caster on his shoulder is mounted on an articulated arm and the whole assembly is removable. Add to that the sculpted body net and the great texturing on his skin and you’ve got a figure that is clearly a labor of love. 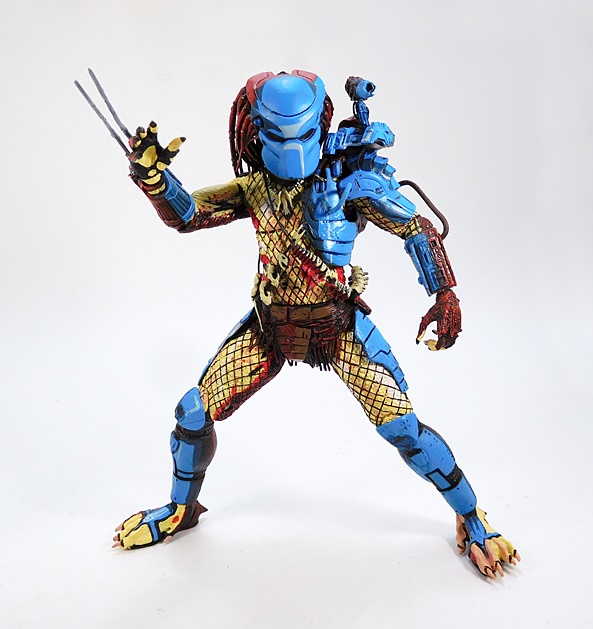 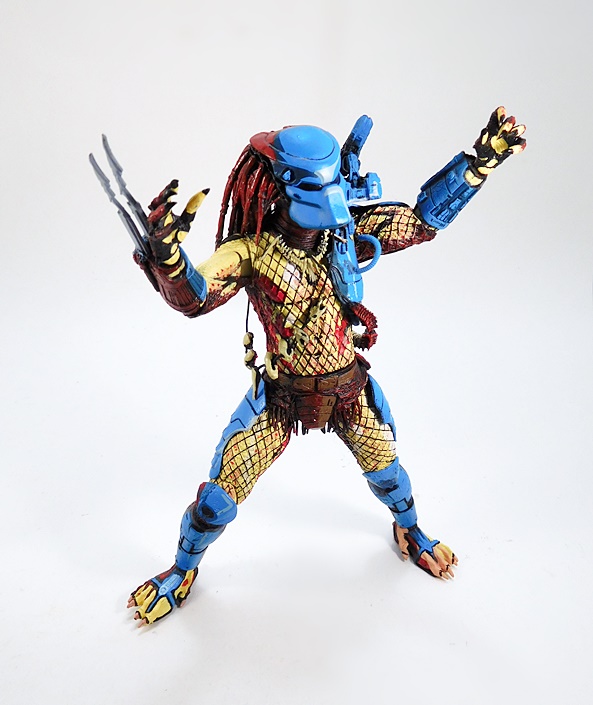 Articulation here is standard NECA, which means a whole lot of of rotating hinges. With that being said, this particular Predator isn’t the most fun figure to pose. Most of the articulation points don’t offer a whole lot of range and he has tiny hoses in his shoulder and left arm that will pull out of their sockets at the hint of re-posing. Plus, as always, the plasma-caster is a tight fit on that shoulder and moving the head will frequently knock it off. Nonetheless, I was still able to get some cool poses out of him for the shelf. 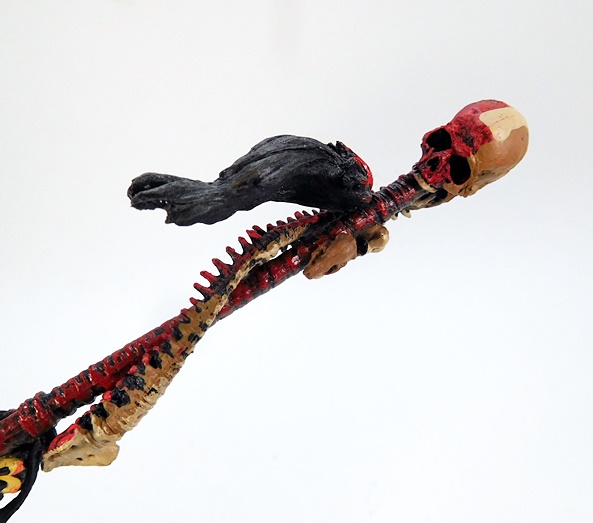 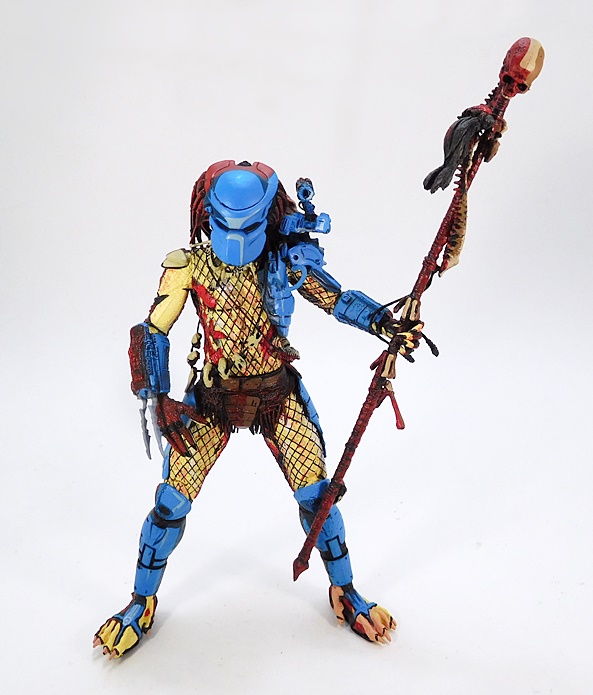 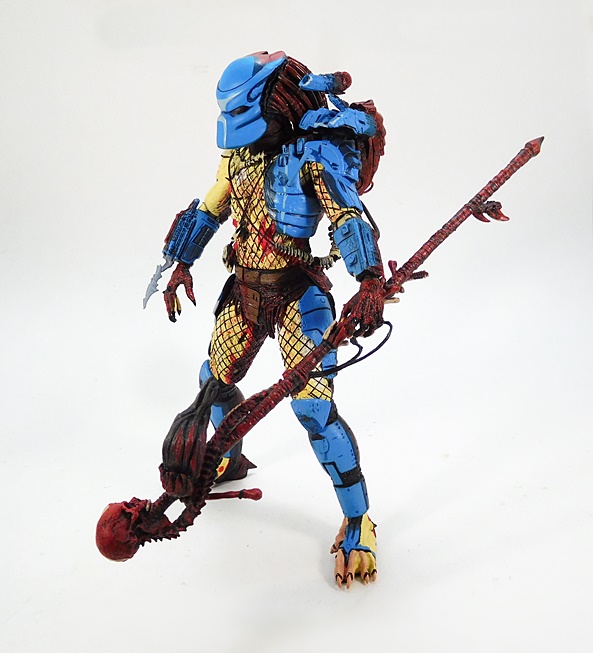 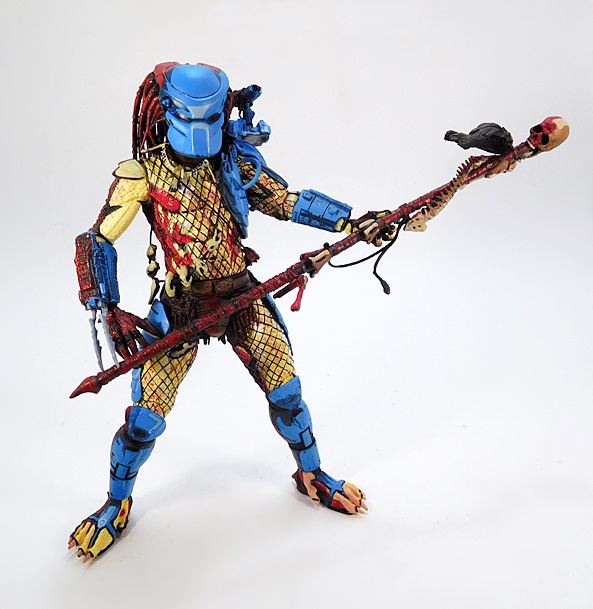 Most of my Predators from NECA are of the Ultimate variety, so I’m used to getting a fair number of accessories with them. This Dark Horse Pred only comes with a couple. In addition to the plasma-caster, you get his staff, which is a grizzly piece of work. The top of the staff is capped off with a rotting skull and the attached spine snaking down around the shaft. There are some additional bones and finery attached as well. His left hand is capable of holding it, but the grip is a little loose. 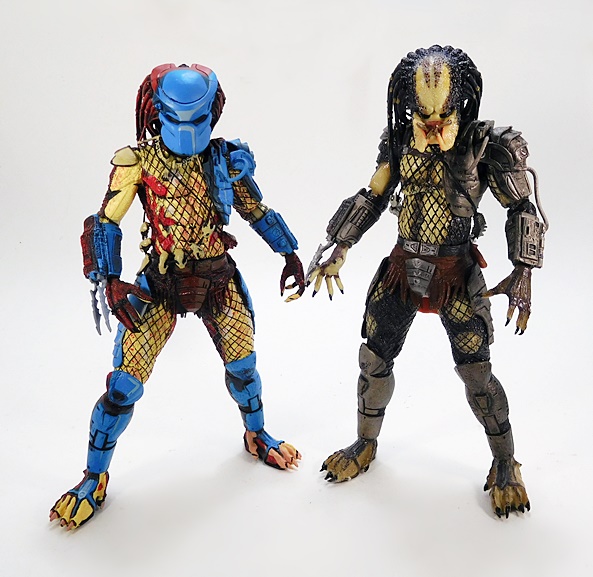 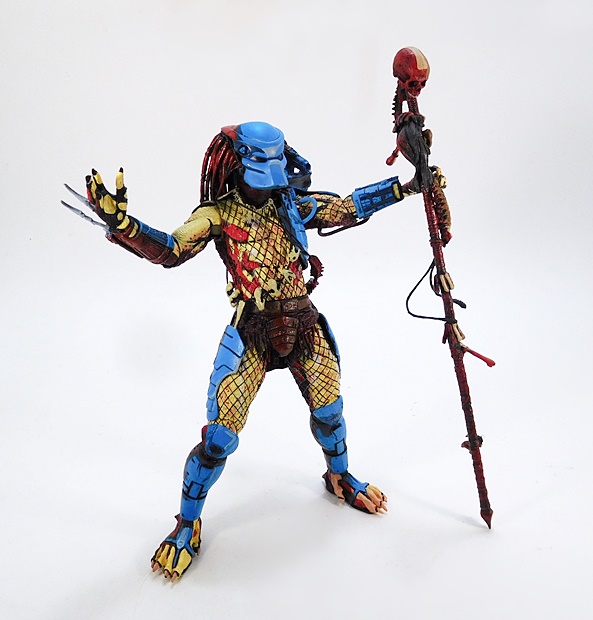 In the past, I haven’t been an avid collector of NECA’s comic and video game repaints, but I mainly picked up this Predator because I have the Dutch and Linn two-pack from the Alien Vs Predator arcade game on pre-order and wanted a similarly painted Predator to go with them. With that having been said, I think I’m enough in love with this ugly motherf’er to motivate me to hunt down some more. And unlike a lot of NECA’s regular figures, the video game and comic releases don’t seem to get too pricey on the aftermarket. Hopefully, the next time a NECA Predator crosses my desk, it’ll be the fugitive from the new film.