Last week I diverted away from the Power of the Primes Terrorcons to have a look at Punch-Counterpunch, so let’s swerve back on course this week by opening up my third of the Deluxe Terrorcons… and it’s Blot! 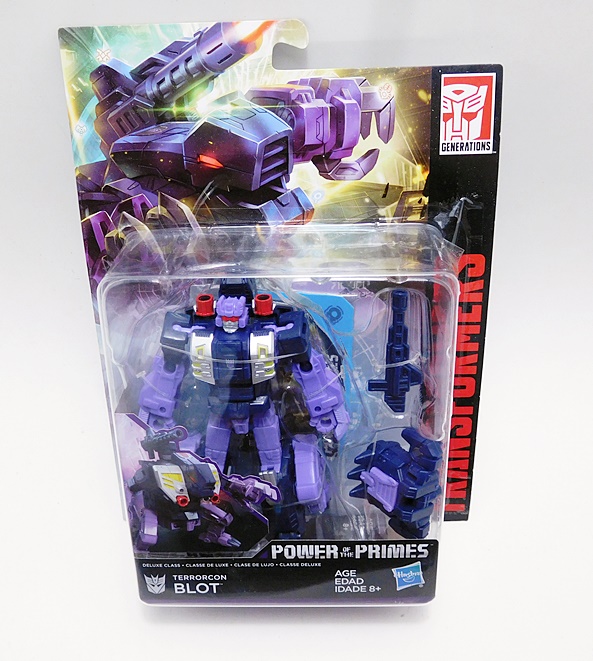 Man, Hasbro came up with some great names for the Terrorcons. Even in a team with characters named Cutthroat and Rippersnapper, Blot is still a stand out moniker. He comes packaged in his robot mode with some great character art at the top of his card in his beast mode. You get the Generations emblem in the upper right corner and the brand name running up the side which, even after a few lines of this package style, will never stop looking weird to me. I’ve been starting off all the Terrorcon reviews in their robot modes, so let’s get Blot out of that bubble and check him out…

Blot is built off of the same engineering as Rippersnapper, and just like Cutthroat and Sludge, he borrows some parts but the majority of the figure has been reworked to make Blot his own bot. With that having been said, I really dig Blot’s overall profile. He’s got a big, beefy chest, powerful forearms equipped with slashing blades, and some beast legs folded up on his lower legs that adds to his bulk without being too kibble-y. The back of the package refers to him as a foot-soldier and that’s exactly what his robot design conveys to me. To me, this is a no-nonsense Decepticon trooper through and through. 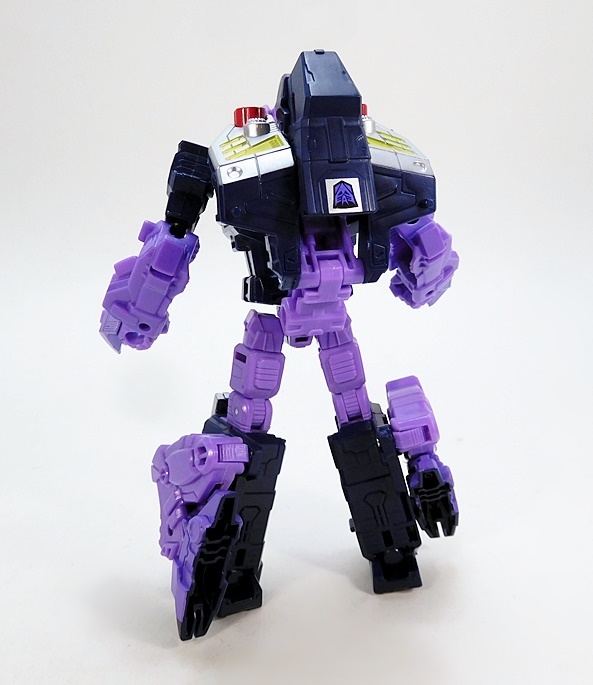 Even from the back he looks great. The beast kibble is worn as a backpack, and it adds to his upper body bulk without detracting from the aesthetic at all. His lower legs are filled out, and everything else back here is nice and clean. I’m such a fan of Hasbro taking those basic G1 scramble city limb robots and fleshing them out in Deluxe Class figures and Blot here is another fine example of why. I didn’t think they’d ever top the Aerialbot limbs’ Deluxe makeovers, but these Terrorcons are giving them a run for their money.

Blot’s deco is absolutely superb. The blue is so dark that it almost might as well be black. Add the purple and you’ve got the makings for perfect Decepticon colors. The additional silver, yellow, and metallic blue paintwork gives the figure a great premium finish that we’ve been seeing in a lot of these Deluxe Class figures recently. As much as I loved the Deluxe figures in Titans Return, the early releases suffered from a severe lack of paint apps, whereas Hasbro has been killing it with the paint on a lot of these Power of the Primes figures and it is much appreciated. 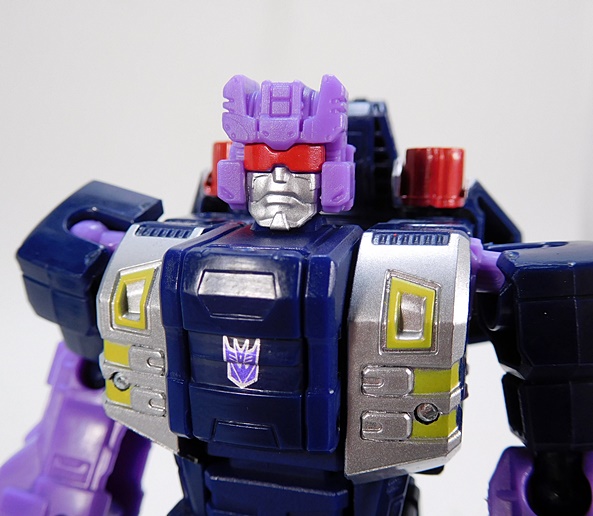 And that brings us to the head sculpt, and I’m happy to say that Blot is characteristically sporting a flat slab of head. The squared off “helmet” looks like it’s made to take a beating. The face is painted silver and he has a red visor across the top. Every bit of his face makes him look like an unpleasant fellow. I get the feeling that the phrase, “Oh crap, Blot showed up!” is a line often spoken at Decepticon gatherings. 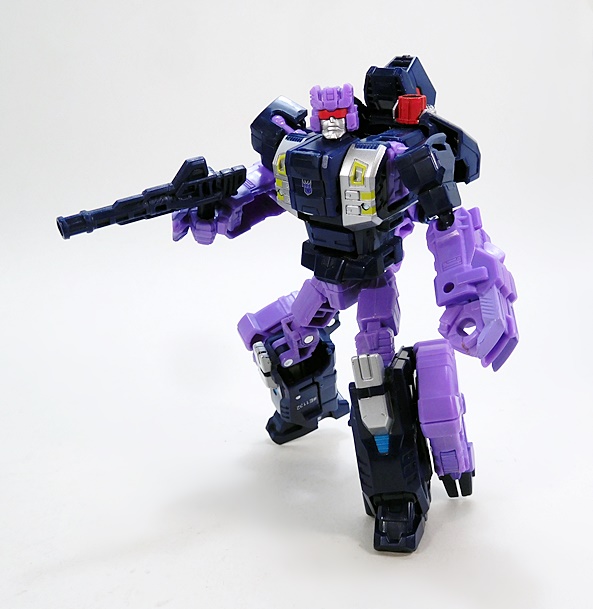 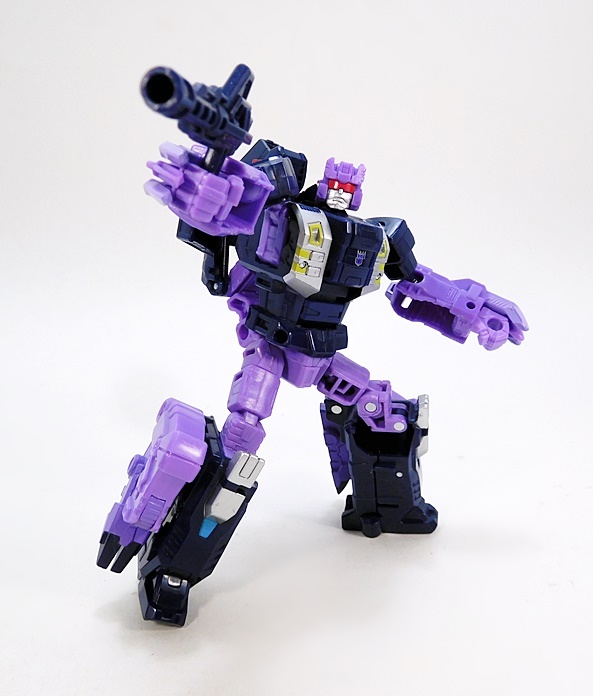 In addition to his Prime Armor piece, Blot comes with his weapon. Back in the day, this was referred to as a slime gun and oh boy am I sticking with that! I’d like to think this thing just burps out nasty splotches of acidic, sticky slime onto his foes, which sends them staggering off and screaming, “OH PRIMUS, IT BURNS!!! GET IT OFF ME!!!!”

Oh yeah, you can also mount it on him on either the left or right side as a shoulder cannon. It’s nice to have options, plus this gives Blot the ability to use the gun for long range attacks while slashing up close enemies with his claws.

With some shared engineering and parts, Blot’s transformation is a little like Rippersnapper’s, but there’s enough new here to make him feel unique and the end result is this wonderful little ball of WTF. It’s like a cross between a slobbering fantasy beast and something out of MechWarrior and I love it to pieces. I especially dig how folding in the robot hands rolls out the third claw for his beast hands. The boxy head is nestled between two silver and yellow armor plates and there are little nozels, which I presume are designed to deliver some kind of hot death to Autobot fools.

There’s a protrubance behind his head that allows you to plug in his slime gun. I just wish he came with two so I could double it up and get a little symmetry going. The deco here is pretty much the same as his robot mode, which is a good thing. One irritating thing… both Blot and Rippersnapper have rub signs in their beast mode, but they omitted it from Cutthroat’s. Go all in, or don’t do it at all, Hasbro! 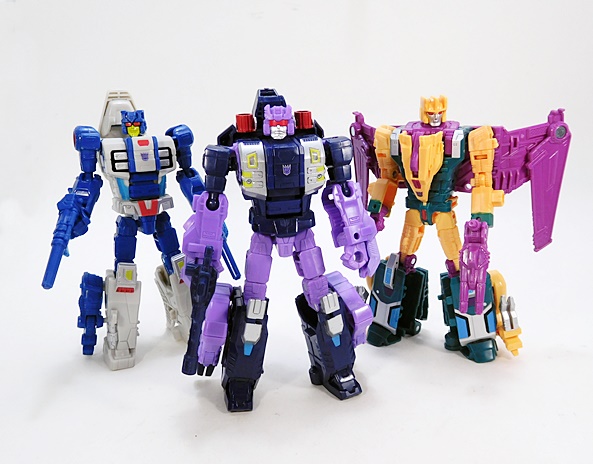 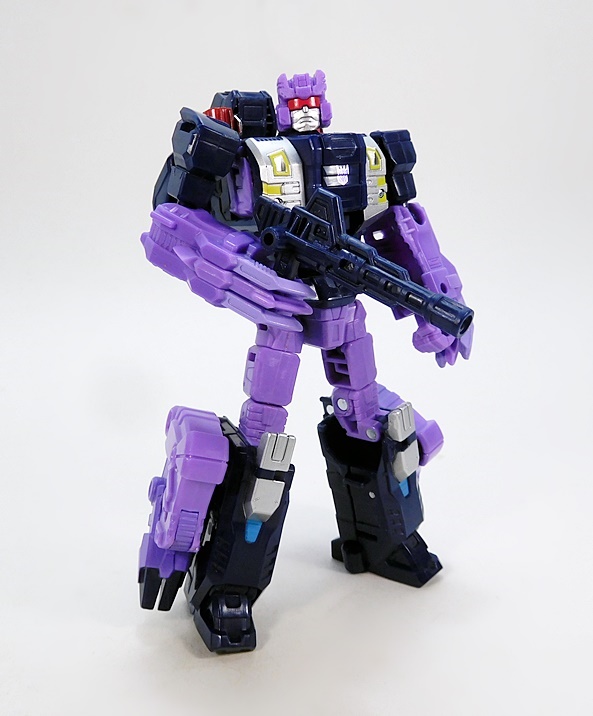 Three Terrorcons down and three direct hits! I absolutely love what Hasbro is doing with these guys. I’ll admit, Power of the Primes has been pretty hit-and-miss with me, but so far the Terrorcons have been making up for a whole lot of stumbles. This is easily my favorite sub-group since the Titans Return Aerialbots. And with just one more Deluxe and one Voyager Class left, I’m getting pretty excited about finally combining them to form Abominus!